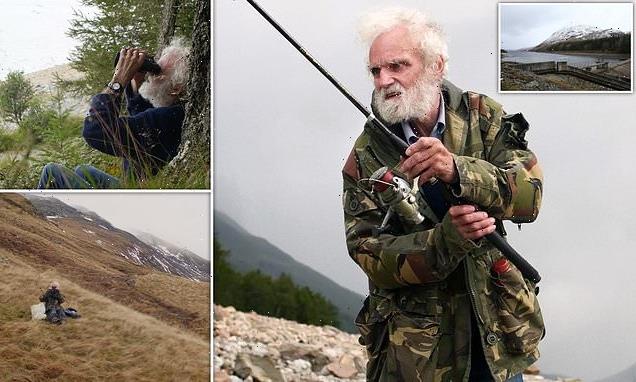 ‘It’s a nice life’: Elderly hermit, 74, who has spent 40 years living without electricity or running water in a hand-made log cabin by a remote Scottish loch, stars in new BBC documentary

A hermit who has lived on his own in a cabin in the woods for almost 40 years is set to star in an eye-opening documentary about his life.

Ken Smith, 74, has survived for almost four decades in the Scottish Highlands with no electricity, gas or running water – relying on a log fire to keep him warm.

The pensioner lives in a log cabin which he built himself on the banks of Loch Treig, in Lochaber, where his main source of food comes from fishing.

Derbyshire-born Ken also forages for berries and grows his own vegetables, and to this day chops up his own firewood and washes his clothes in an old bath outside.

But after suffering a stroke, he now suffers from blurred vision and memory loss, meaning he has had to accept help from outsiders.

‘It’s a nice life,’ Ken says in the upcoming BBC Scotland programme, ‘Everybody wishes they could do it but nobody ever does.’

For the past two years, filmmaker Lizzie McKenzie has been recording Ken for her documentary The Hermit of Treig, reports the BBC.

His log cabin, which he built himself, is a two-hour walk from the nearest road on the edge of Rannoch Moor. 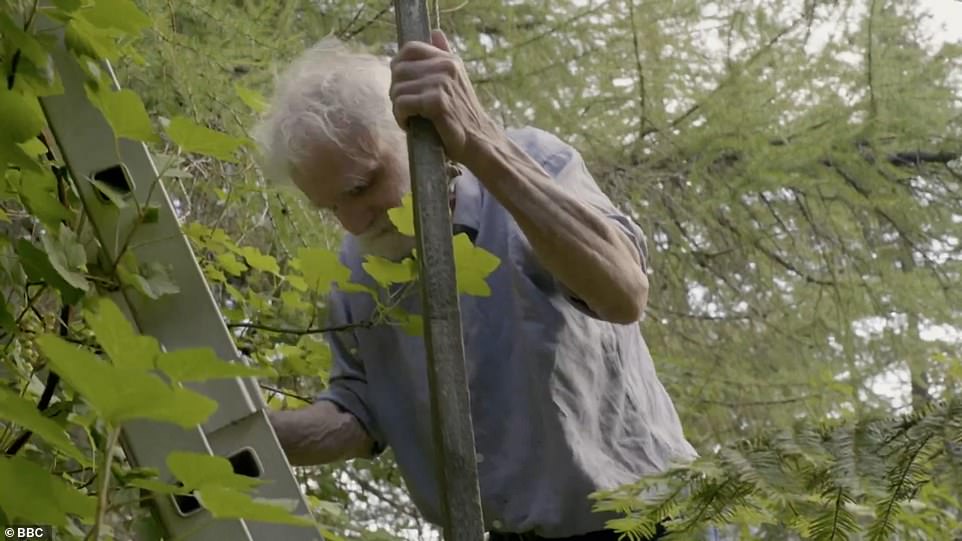 Ken Smith forages for berries near the banks of Loch Treig in the Scottish Highlands, where he has lived in a cabin for almost 40 years 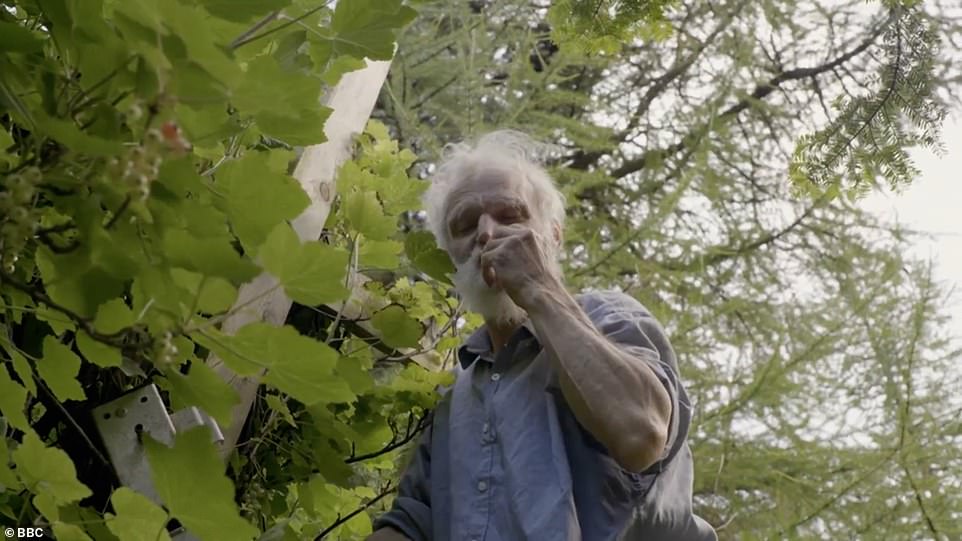 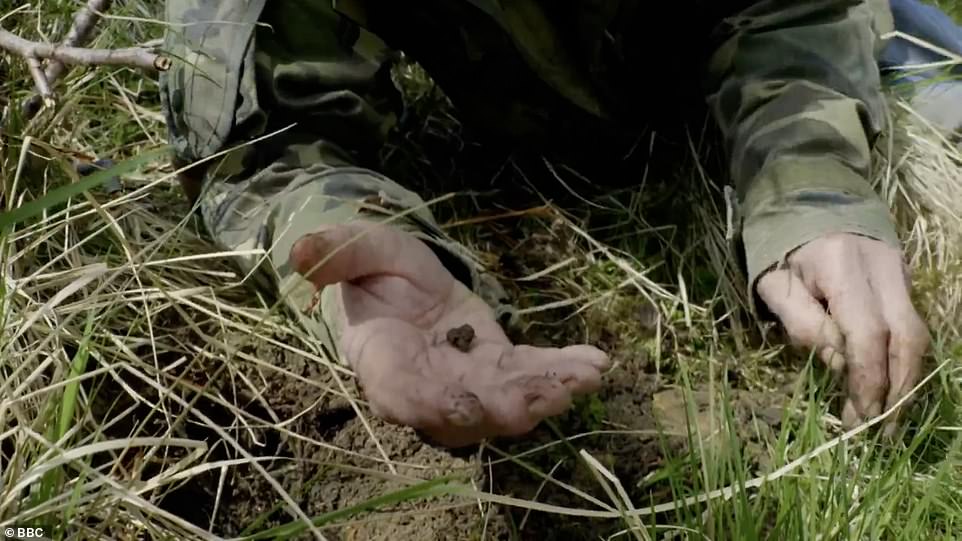 In a trailer for the programme, Ken, from Derbyshire, can be seen foraging for peanuts 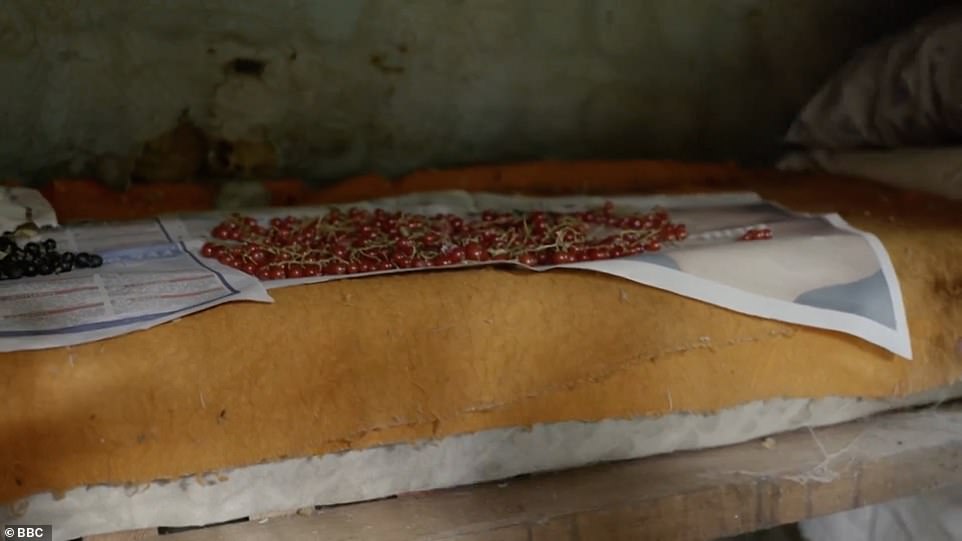 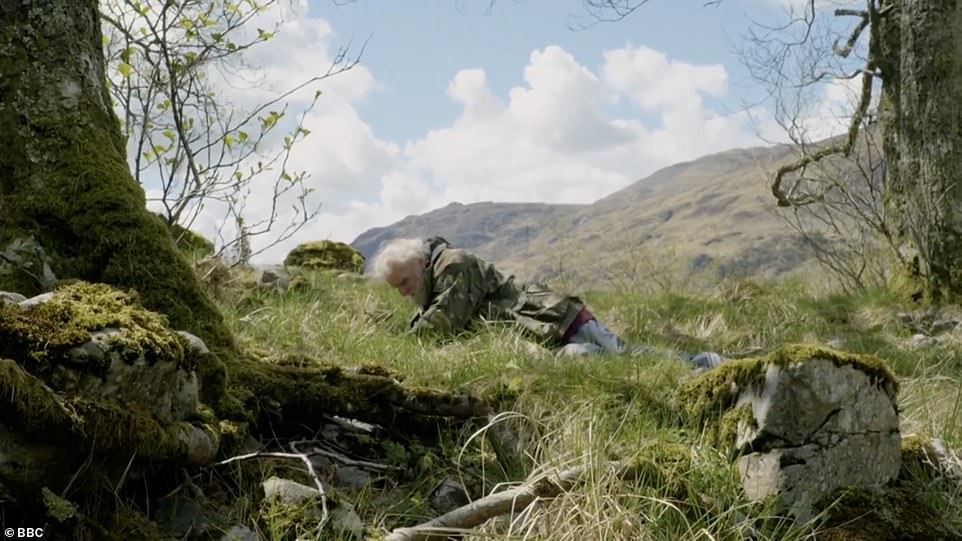 Ken (pictured foraging), refuses to rejoin civilisation and says he will live out the rest of his days in his cabin – and that he hopes to live to 102 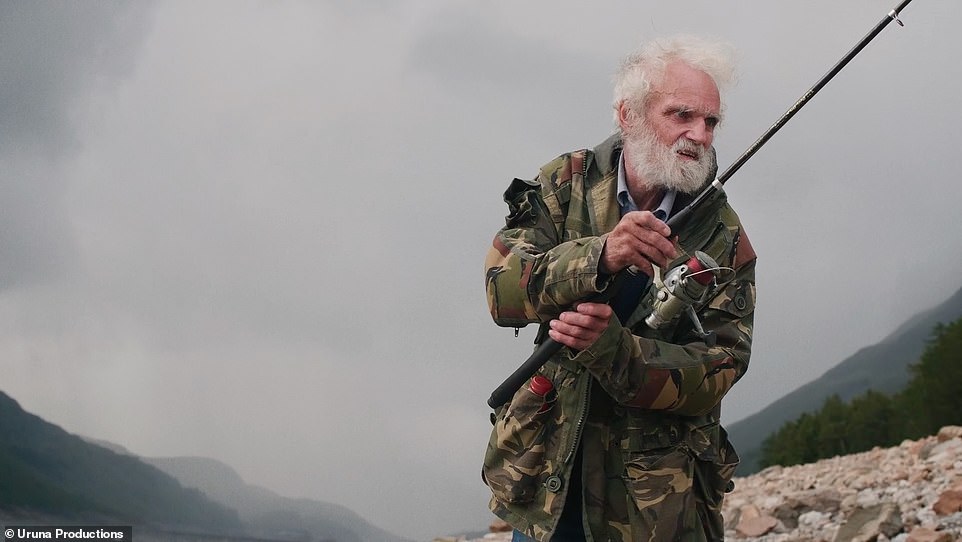 Ken Smith (pictured), 74, has survived for almost four decades in the Scottish Highlands with no electricity, gas or running water – relying on a log fire to keep him warm

‘It’s known as the lonely loch,’ he says. ‘There’s no road here but they used to live here before they built the dam.’

Looking down on the loch from hillside, he adds: ‘All their ruins are down there. The score now is one and that’s me.’

The documentary will explore how traumatic events in Ken’s life led him to turn his back on modern civilisation.

While he began building fire stations at the age of 15, at 26, he was brutally set upon by a gang of thugs following a night out, causing him a brain haermorrhage and a 23-day coma.

‘They said I would never walk again but I did.

‘That’s when I decided I would never live on anyone’s terms but my own.’

Following the assault, Ken took up travelling and began exploring the idea of living in the wilderness.

While visiting the Yukon territory between Canada and Alaska, he decided to wander off the highway and ‘into nowhere’ – travelling around 22,000 miles before deciding to return home.

But it was during this epic journey that his parents died, which he tragically did not discover until he got back.

Ken later walked the length of Britain when he finally broke down over the loss of his parents upon reaching Rannoch in the Scottish Highlands.

‘I cried all the way while walking,’ Ken tells the documentary.

‘I thought where is the most isolated place in Britain?’

‘I went around and followed every bay and every Ben where there wasn’t a house built.

‘Hundreds and hundreds of miles of nothingness. I looked across the loch and saw this woodland.’

Ken says it was then that he stopped crying and decided to construct his log cabin – having earlier built a prototype using twigs.

He has remained there ever since, living mostly off the fish in the loch.

However things became complicated for Ken when he suffered a stroke in February 2019.

While out in the freezing snow, he managed to send an alert via a GPS locator beacon, which he had luckily been given just days earlier.

The message triggered an SOS, which was pinged to a response centre in Houston, Texas, which in turn notified the coastguard in the UK.

Ken was picked up by helicopter and taken to hospital in Fort William, where he spent seven weeks in recovery.

He ignored pleas from doctors who urged him to move into a flat where he would have carers on hand, instead deciding to return to his cabin. 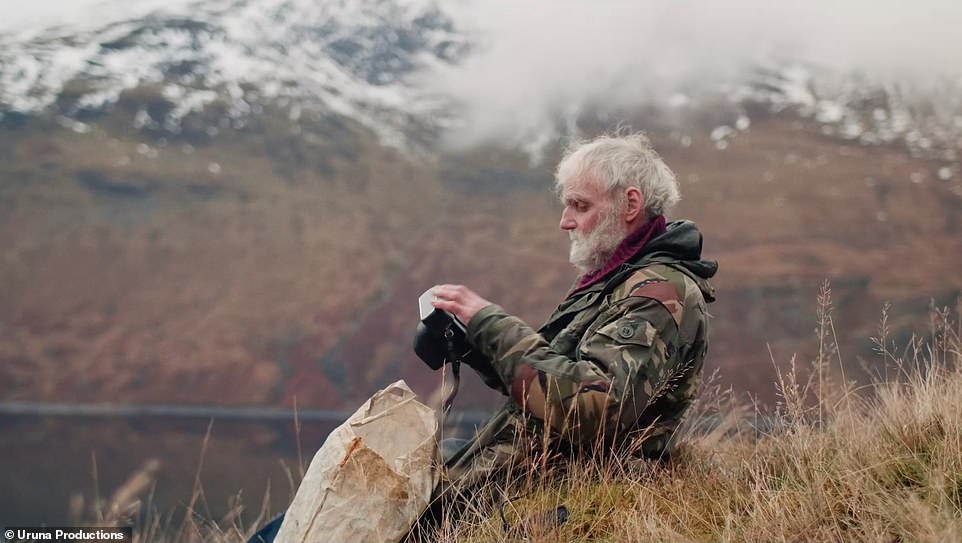 The documentary will explore how traumatic events in Ken’s life led him to turn his back on modern civilisation (Pictured: Ken in the documentary The Hermit of Treig, airing on BBC Scotland tonight) 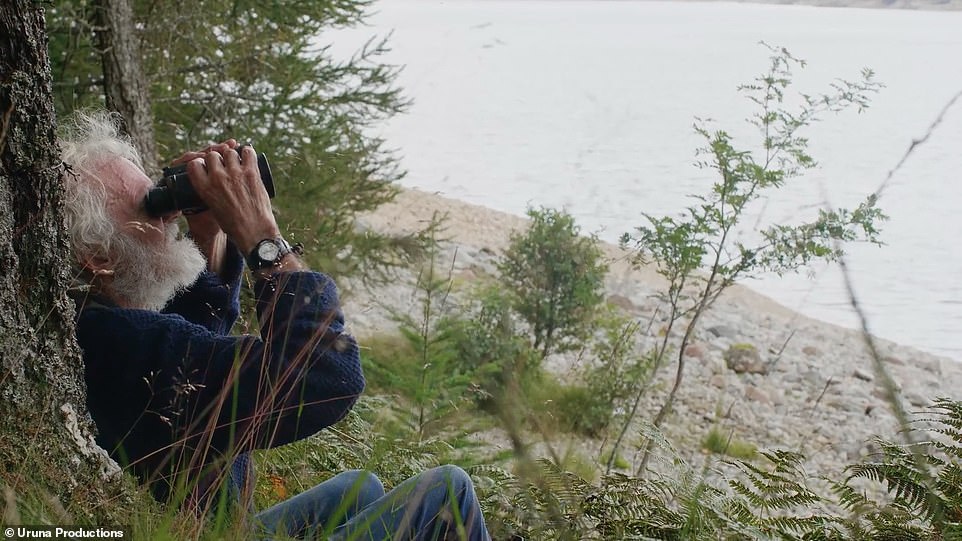 The pensioner lives in a log cabin which he built himself on the banks of Loch Treig, where his main source of food comes from fishing (Pictured in the documentary The Hermit of Treig, airing on BBC Scotland tonight) 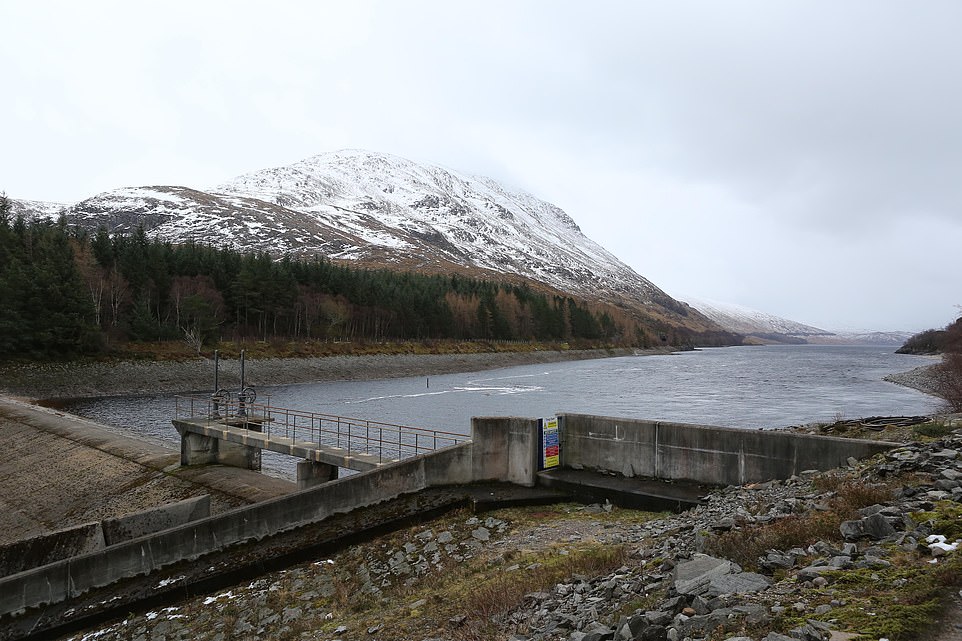 Ken forages for berries and grows his own vegetables, and to this day chops up his own firewood and washes clothes in an old bath outside (Pictured: Loch Treig) 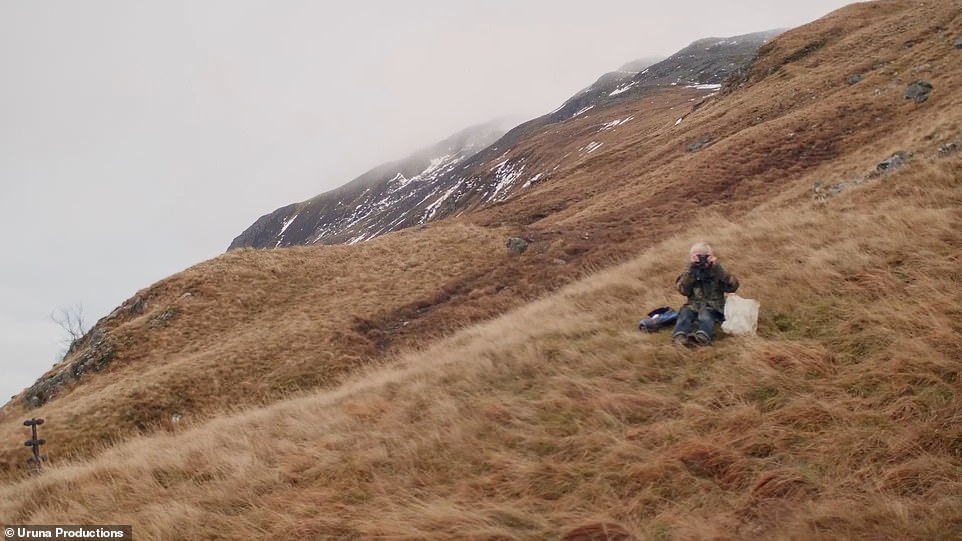 A recent stroke in 2019 has left Ken (pictured) with blurred vision and memory loss, threatening his way of living

But his double vision and memory loss from the stroke means he now has to accept help from the head stalker of the estate where his cabin is situated.

Ken pays the stalker to bring him food parcels every two weeks with money from his pension.

‘People these days have been very good to me,’ Ken says.

A year later a pile of logs fell on Ken, causing him to be airlifted to hospital once more – however he is adamant that he will not leave his cabin.

‘I have had lots of incidents but I seem to have survived them all.

‘I am bound to go ill again sometime. Something will happen to me that will take me away one day as it does for everybody else.

The Hermit of Treig is on BBC Scotland at 10pm tonight (November 9) and will be made available on BBC iPlayer.