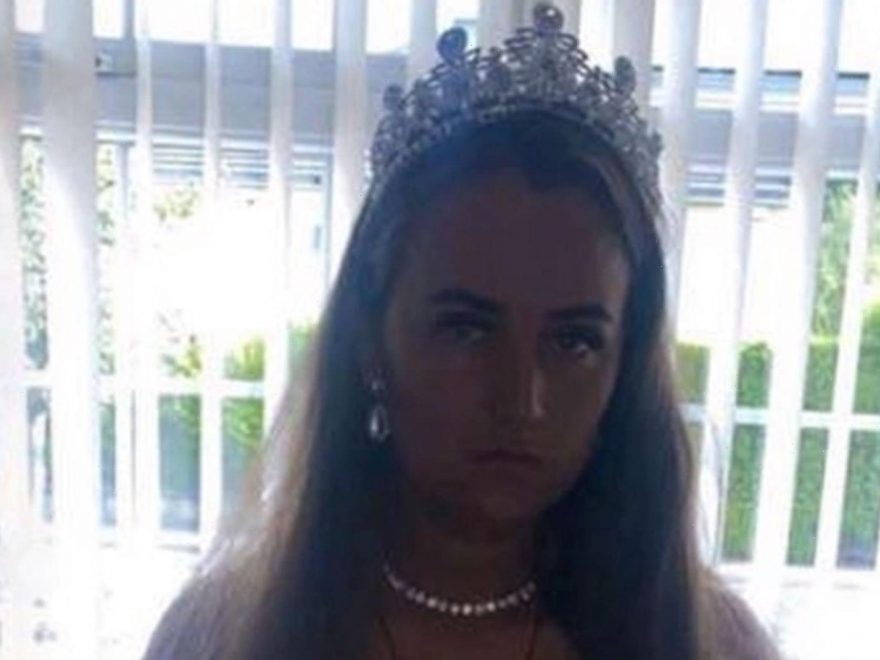 A HEARTBROKEN bride-to-be wore her wedding dress to her fiance’s funeral after her was killed in a car crash just hours before their ceremony.

Miles ‘Miley’ Harty was to wed Kate Quilligan, at St Munchin’s Church in Limerick, Ireland, later on the day the fatal collision occurred. 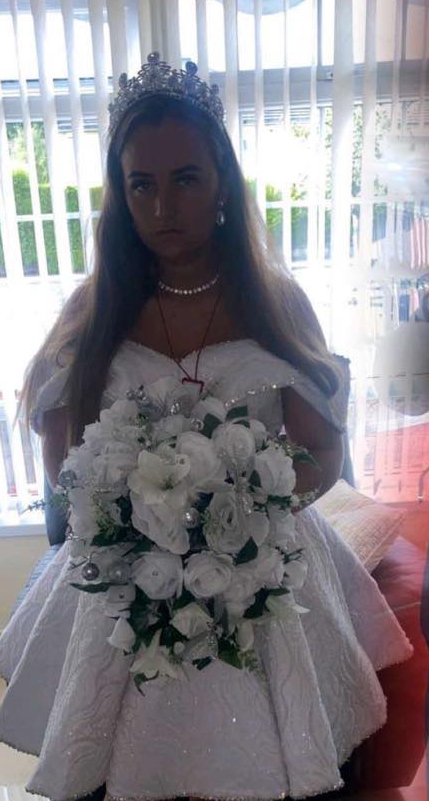 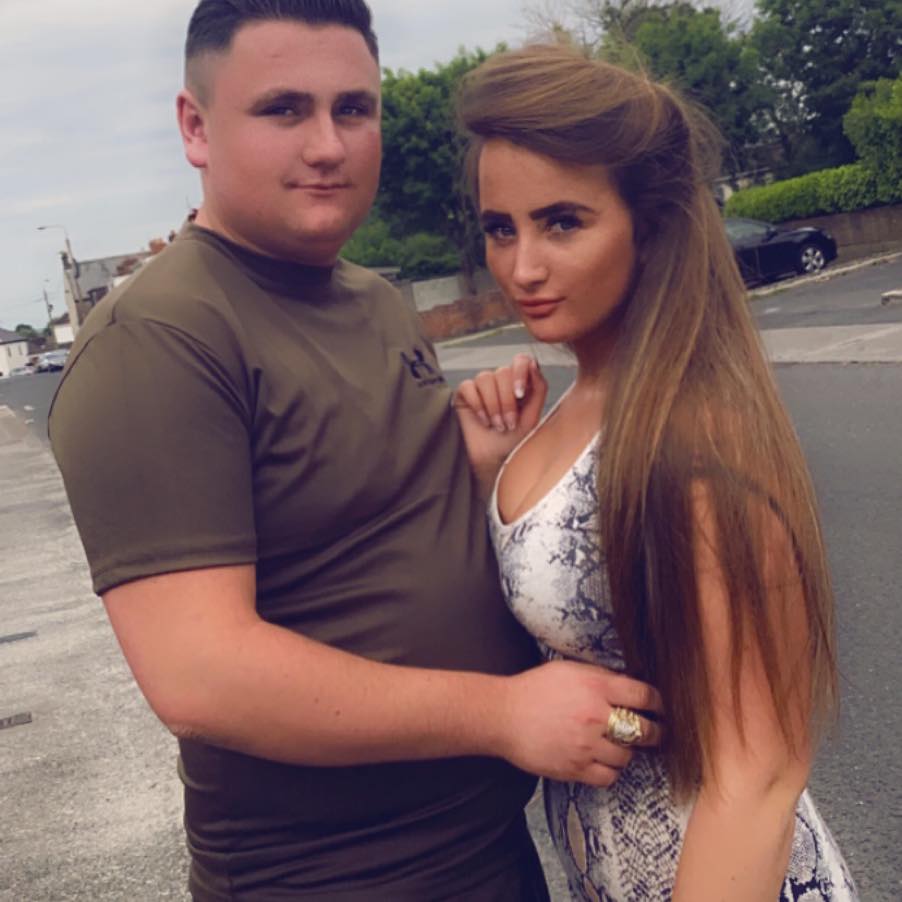 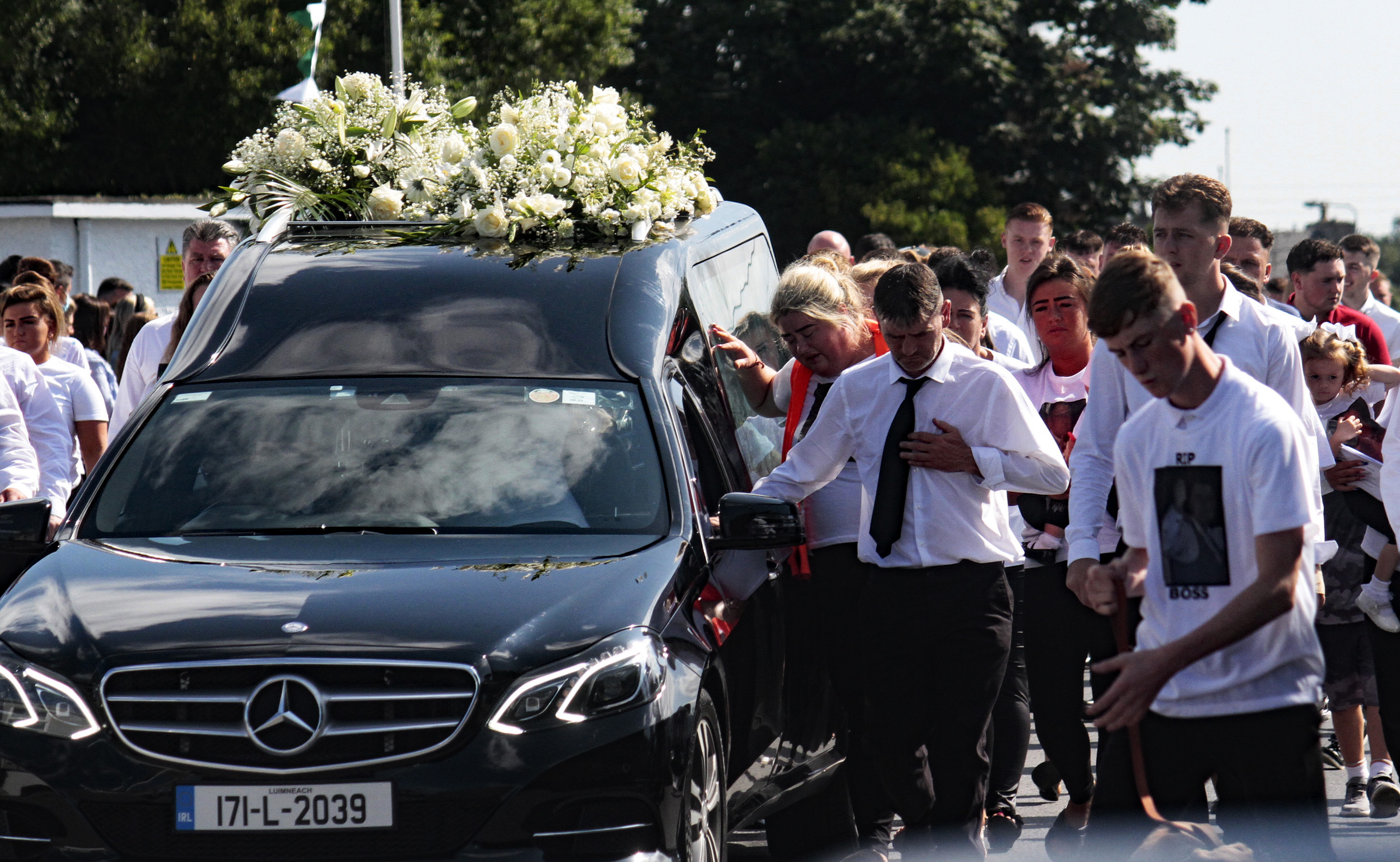 Mr Harty, 20, was a front-seat passenger in a silver coloured Skoda hatchback which left a section of the R518 Askeaton to Rathkeale road and hit a pole around 1am.

A rear seat passenger was taken to hospital with non-life threatening injuries.

The driver, a man in his late teens, was arrested at the scene of the crash and questioned by Gardai before he was released without charge, pending a file to the Director of Public Prosecutions.

Myles, this is all Kate wanted her whole life

On Tuesday his heartbroken fiancé from Thomondgate, Limerick city, wore her wedding dress to say goodbye to her could-have-been hubby.

Video showed grieving Kate decked out in her white gown holding a wedding bouquet with a picture of Myles behind her.

Her dad said to the camera: “Myles this is all Kate wanted her whole life, Miley Harty. She got dressed and she is going into you one last time.”

He then says: “Miley, I will never forget you, you are the boss,” as he leans in to kiss Kate.

After he was laid to rest, devastated Kate posted on social media: "I love you forever and a day, it’s never goodbye just a see you later.

"Can’t wait for a big hug and kiss from you."

Speaking about road safety generally yesterday, Fr Seán Ó’Longaigh told those gathered at St Mary’s Church, Askeaton: “I want to make an appeal to our young people, because accidents are avoidable; cars a wonderful gift, a great amenity, but they are also a lethal weapon.

“And so, the plea that, I’m sure many of us here would make, is to be aware of the danger to yourself and others when you drive a car – you are all too important to us to lose you.”

Fr Ó’Longaigh told Mr Harty’s parents, Margaret and Myles Snr: “Your loss is great, nobody is really meant to bury one of their children, it’s a heart-rendering experience, but (Miley) has a cherished place in your hearts, a place he will never be displaced.

“There’s a numbness, a disbelieve, a grief that follows, and I’m sure there’s the difficulty, even still, of accepting that it has actually happened – it’s more like a bad dream.”

'A DAY OF DEEP GRIEF'

Fr Seán Ó’Longaigh said Mr Harty and Ms Quilligan ought to have had been celebrating their nuptials, “but then, of course, so many circumstances added sorrow to sorrow, and how much more difficult that made things, especially for his bride Kate”.

“You and the rest of the family had to go from a day where you were to experience great joy to a day of deep grief, in a moment,” Fr Ó’Longaigh said.

The fatal collision which Mr Harty died in, “ended all his dreams and possibilities”, he added.

Paying tribute to the 20-year old, Fr Ó’Longaigh said: “I know that for Miley, his family were very important, especially his mother, and his grandparents”.

“As you all know Miley made friends easily and he had many friends, he lit up people’s lives; he loved horses, greyhounds, and hunting with his friends.”

MOURNED BY FAMILY AND FRIENDS

Mourners shared a light-hearted chuckle, when the priest joked: “Miley was extremely generous and would share everything – but not, I believe, his kebab, his chips and his coke; there's a limit to everything.”

An American Steel Casket containing Mr Harty’s remains was driven to the church in a black hearse, behind a sulky, and led by family members who walked with a banner, enshrined with photographs of relatives, and which read “RIP Miley, You Are With Your Family Now”.

A large poster of the deceased and another one of him with his bride were displayed beside his coffin and floral tributes left at the church altar.

Mr Harty’s coffin was shouldered out of the church to a waiting white, four-wheeled horse-drawn carriage, to be taken to his final resting place at Reilig Mhuire Cemetery, Askeaton. 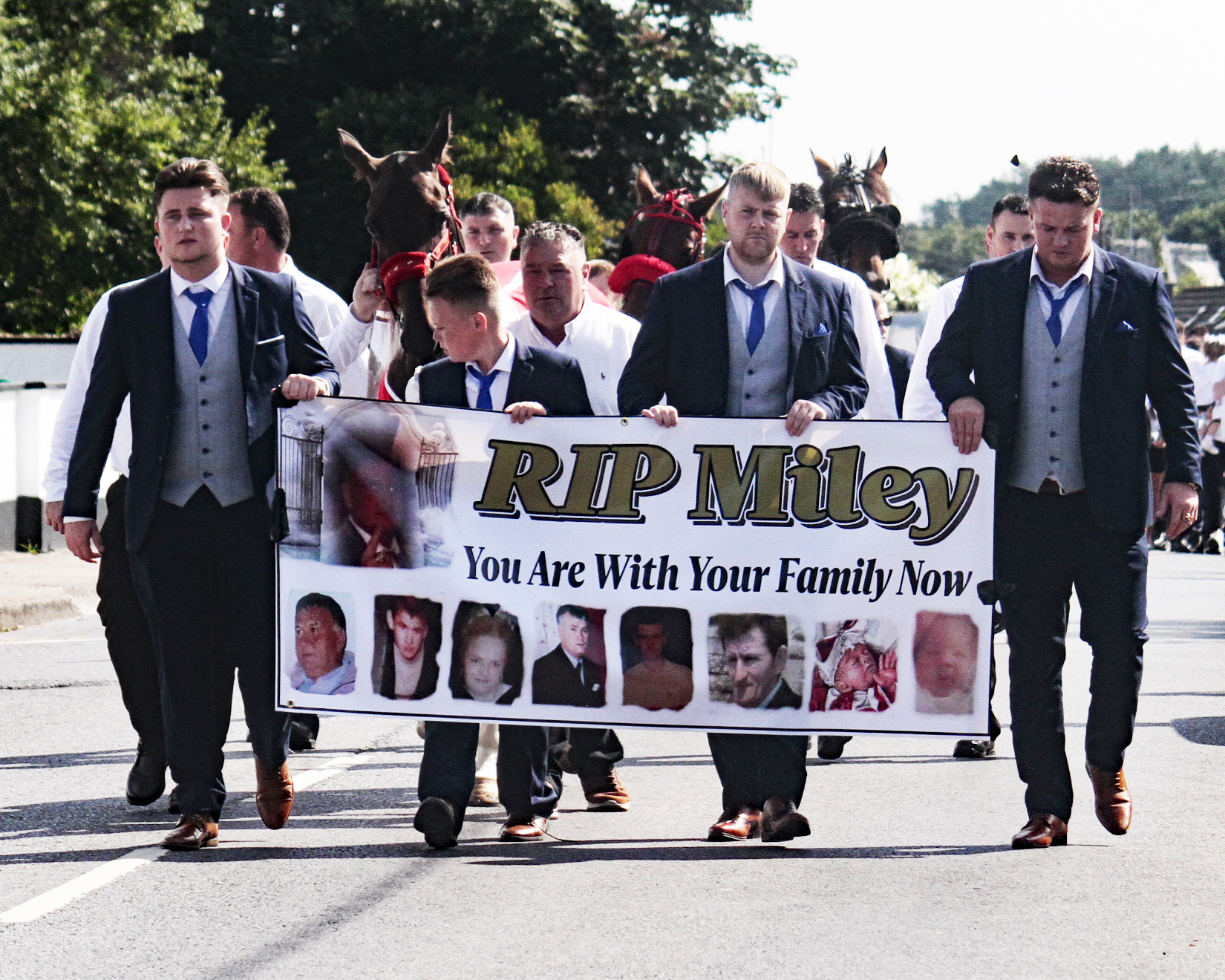