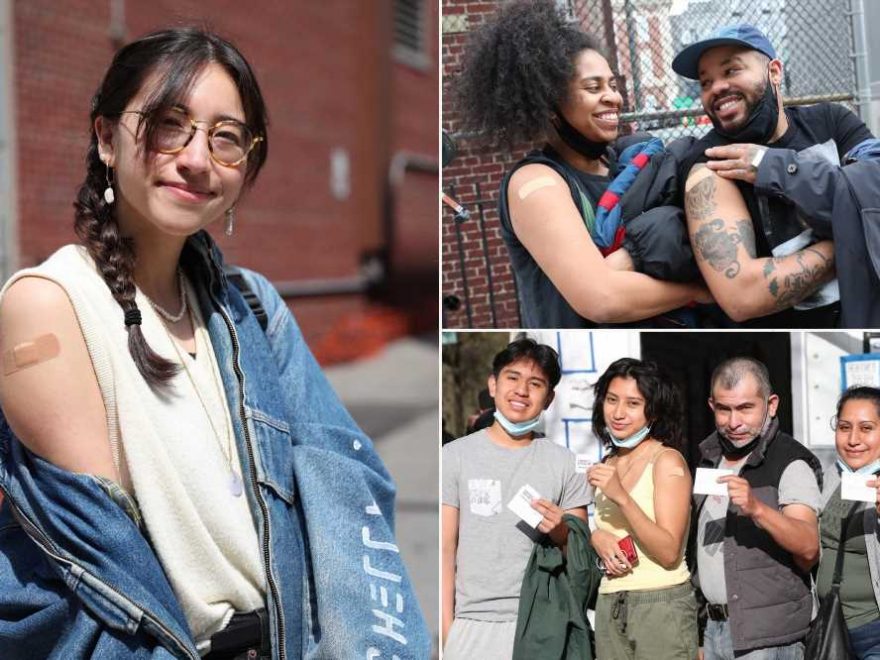 Burning Man may not require COVID-19 vaccinations after backlash

Back and Fourth: Biden now says if Americans don’t get COVID jabs they might have to cancel July 4

Star goalie: NHL lied to us, ‘forced us to take vaccine’

Many people in the city that never sleeps are still snoozing on the COVID-19 vaccine.

Around half of adults in the New York City are yet to get their first dose — even though everyone age 16 and over has been eligible for weeks and appointments are widely available.

Vaccinated New Yorkers are now urging their feet-dragging neighbors to get on board so the Big Apple can finally can finally reach herd immunity — estimated to come when between 70-90 percent of people are inoculated — and return to its old self.

“By getting the vaccine, I feel like one by one, people will be able to help guarantee that we can bring back our normal lives,” said 16-year-old Erin Silva, who got her first dose at the York College vaccination site in Queens Wednesday.

She said getting vaccinated is crucial so that teens like her can go back to school full-time instead of “staring at a screen all day and not learning anything.”

As of Wednesday, around 3.2 million New Yorkers, or 49 percent of the city’s adult population, had received at least one dose of the COVID-19 vaccine and statewide, 42.6 percent of residents have started their inoculations, data show.

The number of Big Apple denizens who are fully inoculated — meaning they’ve received both doses of the Pfizer or Moderna vaccine or one shot of the Johnson and Johnson booster — stood around 32 percent Wednesday, or 2.1 million adults. Statewide, not even a third of New Yorkers are completely inoculated — only 5.8 million have received their doses, or 29.2 percent of the state.

The data comes even as all New Yorkers have been eligible for the vaccine since April 6 — and online appointment portals show tens of thousands of slots now up for grabs, after months of scarcity.

At the state-run Medgar Evers College mass-vaccination site Wednesday, staff told The Post they usually give out about 3,000 doses a day but by early afternoon, they’d only given out 661.

“Everyone who can get it should get it because it protects everyone else too, not just you,” said Maya Man, 24, a new media artist who lives in Brooklyn, describing the facility as “fairly empty.”

“Almost all my friends have gotten it and they’re in their 20s and 30s. I think it’s important more people get it. I tried previously and it was very hard. It’s gotten much easier now.”

Getting teachers vaccinated, which is crucial to reopening schools, is still lagging behind, data from the Department of Education show.

Only 43 percent of DOE workers — including teachers, administrators, social workers and guidance counselors — have gotten the shot, even though educators have been eligible since January.

New York state currently ranks 14th country-wide for vaccination rates, falling behind other states in the northeast like Maine, Vermont, Connecticut and New Jersey, according to Becker’s Hospital Review, which tracks vaccination rates by state.

Maine currently has the highest vaccination rate nationally with about 33.6 percent of all residents fully inoculated while Georgia and Alabama are the lowest in the nation with just 19.8 and 19.7 percent respectively, data show.

Critics say New York state and city need to do even more to make it as easy as possible for any New Yorker to get a shot in the arm.

Gov. Andrew Cuomo announced Wednesday that most state-run vaccination sites will allow anyone age 60 and over to walk-in and get a dose without an appointment starting Friday — adding to about 30 city-run sites that are allowing walk-ins for those 50 and over.

But Councilman Mark Levine, who chairs the city council’s health committee, said that access needs to be open to all.

“I’m worried this will confuse people, there are now different rules for city-run sites, state-run sites, pharmacies and other independent providers… I don’t think the public understands which sites are state run or city run,” Levine told The Post.

“The sooner all the major providers convert to walk-ins for all ages, the better… This needs to be the kind of thing that is frictionless.

“It’s a big deal that we’ve gotten 49 percent of adults in New York City with at least one shot but it’s going to take a lot more work to get the next half of the city vaccinated.”

Compounding the issue is the Centers for Disease Control and Prevention’s decision to pause use of the Johnson and Johnson vaccine after six women reported blood clots after receiving the inoculation.

Although the one-dose shot made up a small portion of the vaccines in New York and around the country, it is important in accessing people who are difficult to reach, such as the elderly and those in rural areas, or residents who may not come in for a second dose like the homeless.

The Big Apple had been relying on J&J for those who are homebound and had to stop the program for several days after the federal announcement. The city is now using two-dose vaccines in its place.

But experts warn that the pause may have also damaged public confidence in vaccination.

“The actual result in public opinion has been documented in surveys as a dramatic drop in confidence by many people in any of the vaccines, so therefore this has had a major negative impact on people wanted to be vaccinated,” said Dr. Stanley H. Weiss, a public health expert and medical doctor with Rutgers University.

He said the CDC’s messaging on the pause “failed” and was “misinterpreted,” as officials’ caution should have signaled that they were taking safety seriously.

Federal health officials are set to meet Friday to decide whether to green-light J&J’s return. The vaccine is already rolling back out in Europe, where the European Union’s drug regulatory agency said this week that there’s a “possible link” to “very rare cases of unusual blood clots” — but that the benefits still outweigh the risks.

For now, the Big Apple’s restaurants, theaters and stadiums remain at limited capacities, most schools are only partially reopened — and masks remain mandatory in crowded public spaces, even for those who are fully vaccinated.

Weiss said “normal” is likely to come when 80 to 90 percent of the population is inoculated — but the longer that takes, the more we risk being out run by more-contagious variants of the virus.

“We need to be cautious about what we say because it in part depends on how quickly we get the population vaccinated,” he said.

“The faster we do so, the less risk variants pose, the slower the uptake in getting to high rates of vaccination, the greater of a risk the variants will pose.”