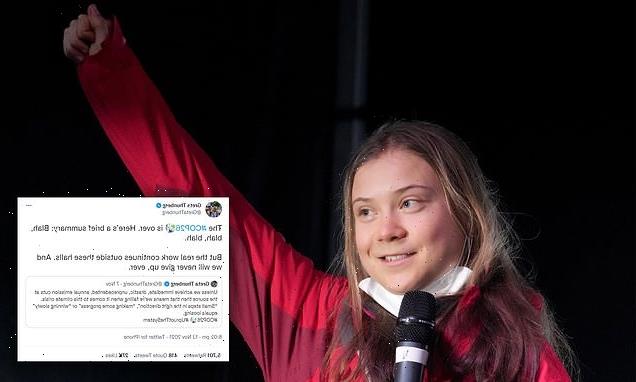 Greta Thunberg has described the Cop26 summit in Glasgow as more ‘blah, blah, blah’ after a new global climate deal was agreed on Saturday.

The Swedish climate change activist, 18, took to Twitter to urge her followers to ‘never give up, ever’ and that the ‘real work continues outside these halls’.

It comes after China, whose president did not attend, and India forced a last-minute change over the language about coal. 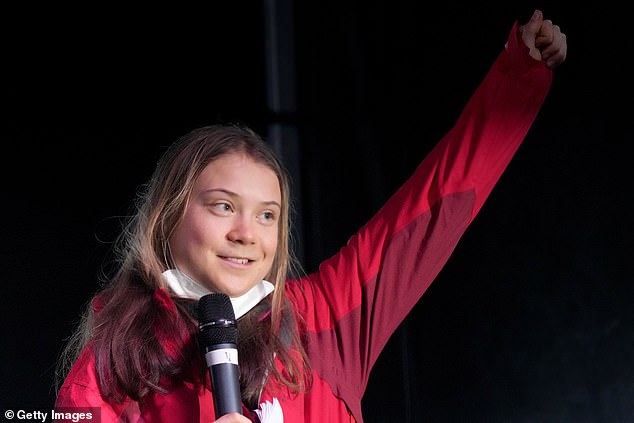 Greta Thunberg (pictured) has described the Cop26 summit in Glasgow as more ‘blah, blah, blah’ after a new global climate deal was agreed on Saturday 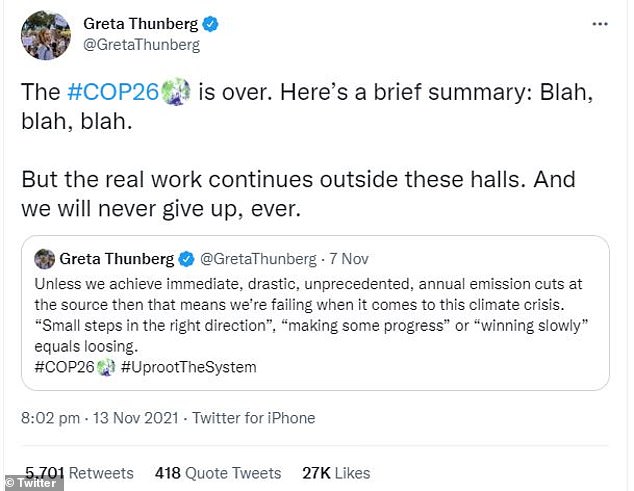 The Swedish climate change activist, 18, took to Twitter to urge her followers to ‘never give up, ever’ and that the ‘real work continues outside these halls’

‘But the real work continues outside these halls. And we will never give up, ever.’

The Glasgow Pact was watered down at the last minute with the wording of unabated coal – the burning of coal without climate change mitigating technology – changed from ‘phase out’ to ‘phase down’, leading to angry responses from European and vulnerable countries.

Her comments were made alongside a tweet from November 7 which said: ‘Unless we achieve immediate, drastic, unprecedented, annual emission cuts at the source then that means we’re failing when it comes to this climate crisis.

She slammed Joe Biden’s infrastructure and climate proposal as insufficient as she opened a conference in Italy – accusing him and other leaders of making ’empty promises’ over global warming.

‘Net zero by 2050, blah blah blah. This is all we hear from our so-called leaders. Words. Words that sound great but so far have led to no action.’

Miss Thunberg was referring to President Joe Biden’s proposal to ‘Build Back Better,’ a wide-ranging White House plan to lower child care, drug and housing costs, cut taxes on the middle class and subsidize clean energy like wind and solar.

On September 13, Democrats in Congress laid out a series of proposals to meet the White House’s goal to cut greenhouse gas emissions in half by 2030. 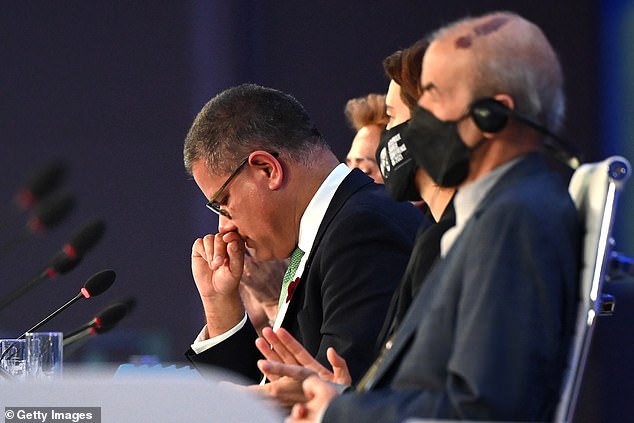 Britain’s president of the conference Alok Sharma ‘fought back tears’ on Saturday as he told delegates he was ‘deeply sorry’ for how the ‘process’ unfolded as he brought down the gavel to signal an agreement had been passed.

His voice broke with emotion after hearing from vulnerable nations, which expressed their anger over the changes to the text, as he said: ‘May I just say to all delegates I apologise for the way this process has unfolded and I am deeply sorry.’

‘I also understand the deep disappointment but I think as you have noted, it’s also vital that we protect this package.’

Despite fierce disagreements over the wording of the deal, it is still a progressive agreement as it is the first UN climate agreement that has made an explicit mention of fossil fuels. 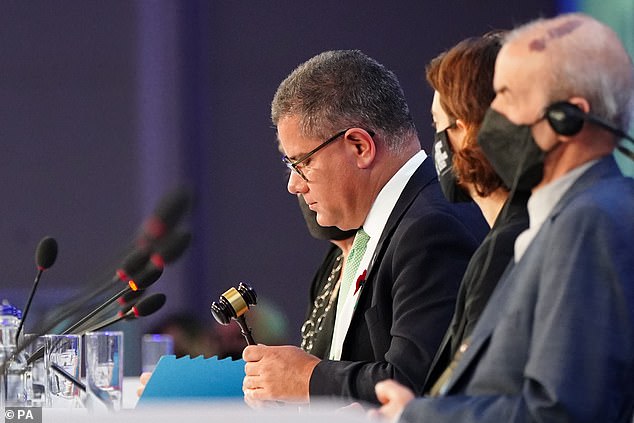 Leaders at the Cop26 climate change summit reached a deal, but it prompted fury after China and India forced a last-minute change over the language about coal. Pictured: Alok Sharma

The overall deal has seen nearly 200 countries agree to keep the goal of limiting global warming to 1.5C above pre-industrial levels ‘alive’ or within reach.

The pact requests countries revisit and strengthen their 2030 national climate action targets ‘as necessary to align with the Paris Agreement temperature goal by the end of 2022, taking into account different national circumstances’.

World leaders and campaigners shared their disappointment at the changes made in the agreement, with some even deeming the deal as ‘weak’, while others insisted that the summit made important progress for global warming.

But many world leaders expressed their optimism following the conference, arguing that the green deal is an important step in tackling the climate crisis and will make a difference in the coming years.

What has been agreed at Cop26 and why is there anger at China and India?

The main focus of Cop26 was an attempt to agree a plan that would limit average global temperature increases to 1.5C above pre-industrial levels.

Pivotal to this benchmark was a deal on coal use.

The fossil fuel is the worst pollutant currently in use around the globe, especially by growing industrial giants like India and China.

Delegates in Scotland spent long days days over weeks arguing over the language to use to tie countries down to shutting down coal-fired power stations and not building any new ones.

The summit believed last night that they had achieved a working that could start this happening, with talk that nations would ‘phase out’ the black carbon chunks.

But at the death in Glasgow last night, it was watered down following a push led by China, backed up by its erstwhile enemy and rival India, that saw the wording replaced by ‘phase down’.

The difference is that while it holds countries to reducing their coal use, it does not hold them to ceasing altogether.

Alok Sharma last night apologised for the last-gasp change. For the Glasgow Pact to pass, support had to be unanimous.

But today he insisted it was an ‘historic achievement’ as previous Cop summits have failed to get any change on coal use.

What else has been agreed?

There has also been a doubling of money for developing countries to help them to adapt to climate change. The current goal is $100bn a year, while there could be a trillion dollar a year fund from 2025.

But the agreement also noted ‘with deep regret’ that wealthy nations had also failed to stump up a separate annual sum of $100 billion they promised over a decade ago.

During the conference, a range of wealthy governments stepped up with new pledges – totalling about $960 million – for two key U.N.-backed funds that help vulnerable nations adapt to climate change.

Still, the amounts pledged remained far below the annual $70 billion developing countries are thought to need now, an amount that could rise to $300 billion a year by 2030, according to the United Nations.

It urged countries to pay up ‘urgently and through 2025’.

There was also progress toward setting a firm target for adaptation finance, which currently accounts for just a quarter of international climate finance for developing nations, garnering only $20 billion in 2019.

In a bid to spur further ambition, major emitters will also be asked to present new targets at the 2022 UN climate conference in Egypt.

China has been particularly wary of having others scrutinise its efforts too closely. Along with other developed and emerging economies, it is now expected to report every five instead of every 10 years.

Why do we need this?

When the Paris Agreement was negotiated in 2015, it was clear the national action plans, or nationally determined contributions (NDCs), that countries had submitted for emissions cuts up to 2030 left the world way off track to meet the temperature goals in the accord.

The agreement built in a ratchet mechanism that would see countries return with updated plans up to 2030 by Cop26 – which was meant to take place in 2020, but was delayed by the pandemic.

But the latest set of plans countries submitted in the run-up to Glasgow still leave the world for off track for the 45 per cent emissions cuts needed by 2030 to meet the 1.5C goal, instead heading for 2.4C of warming.

At the summit, countries were under pressure to come up with a deal in Glasgow to take steps to increase their ambition for emission cuts in the 2020s to stop the 1.5C goal slipping out of reach.

And with the impacts of 1.1C of warming already biting, there was also pressure to provide the finance for developing countries to cope with the crisis, and to address the loss and damage they are facing.

Scientists have also warned keeping temperature rises to 1.5C requires global emissions to be cut by 45 per cent by 2030, and to zero overall by mid-century.

What does it mean for ordinary people in the UK?

Lives are going to change because of climate action, but the UK already has targets to cut its emissions by 68 per cent by 2030, in line with the Paris Agreement, alongside its domestic legal carbon-cutting goals.

It is implementing plans to meet them, with measures such as the coal power phaseout, conventional car ban and efforts to switch home heating to clean alternatives to boilers planned or under way.

In the longer term, it keeps alive the possibility of limiting global warming to 1.5C, helping protect people from the worst impacts of climate change.

In the UK, that means avoiding the most damaging flooding and storms, coastal erosion, water shortages and heatwaves that rising temperatures will bring.