Protesters have climbed onto two North Sea oil platforms to campaign against leaving parts of the old rigs in the sea.

Greenpeace activists from the Netherlands, Germany and Denmark boarded Shell’s Brent Alpha and Bravo platforms today in protest at plans by the company to leave parts of old structures in the North Sea.

The climbers scaled the platforms, which are no longer operational and lie north-east of the Shetland Islands, and hung banners saying, ‘Shell, clean up your mess!’ and ‘Stop Ocean Pollution’. 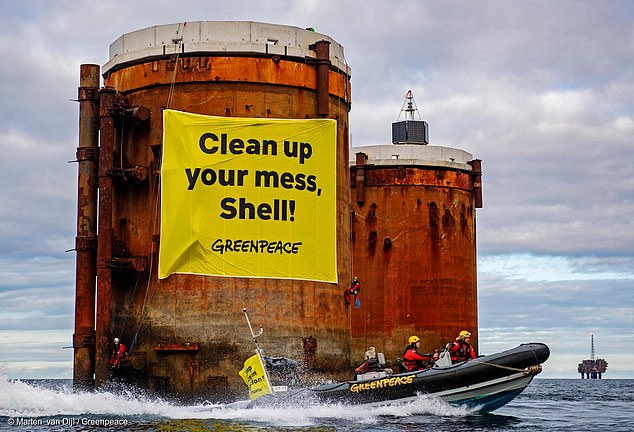 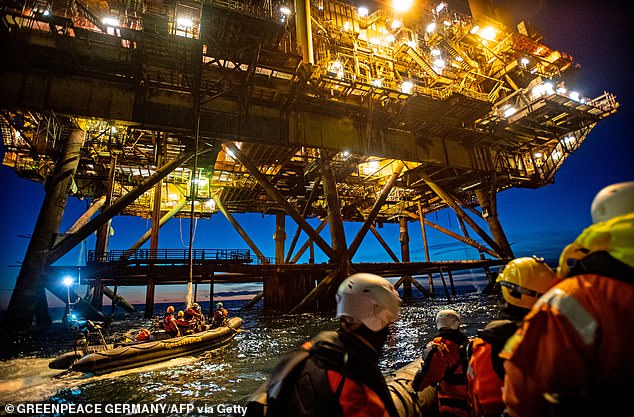 The group also boarded two oil platforms in the North Sea, north of the Scottish mainland

Campaigner Dr Christian Bussau said Shell’s plans to leave parts of the four Brent platforms at sea were a ‘scandal’.

He said: ‘Shell’s plans are a scandal and go against international agreements to protect the environment.

‘With escalating climate emergency, biodiversity loss and species extinction, we need healthy oceans more than ever.

‘Abandoning thousands of tonnes of oil in ageing concrete will sooner or later pollute the sea. Shell must be stopped.’ 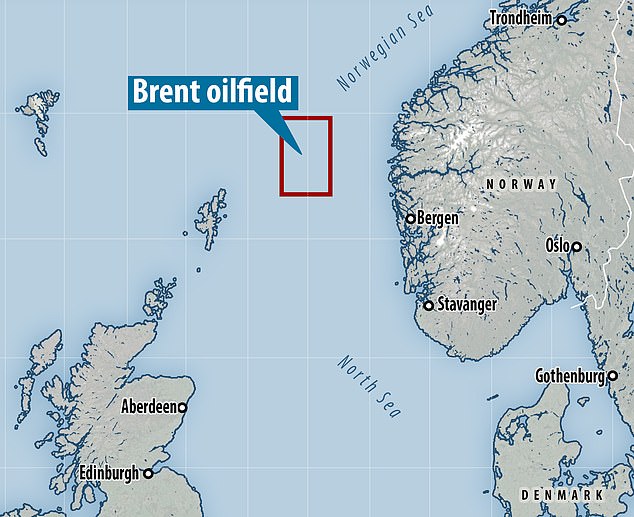 Greenpeace International said that although a ban on dumping installations and platforms in the North East Atlantic ocean was agreed in 1998 Shell has requested an exemption from the UK Government.

It called for governments to protect the ocean and ‘not cave in to corporate pressure’.

He added: ‘Shell is directly fuelling the climate emergency that is causing more extreme storms, floods, droughts and wildfires and bringing misery to millions of people around the world.

‘The company’s reckless business threatens some of the world’s most important ecosystems with extinction and has to be stopped. For us to have a future, toxic oil companies like Shell must have no future.’ 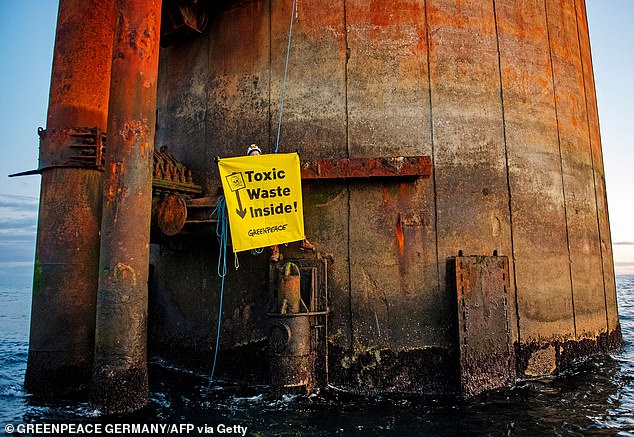 The protesters tied banners to the platforms, with the message ‘toxic waste’ inside

But a Shell spokesman said the company had spent 10 years conducting in-depth research into decommissioning the Brent platforms and its recommendations were the result of more than 300 scientific and technical studies.

He added: ‘We can confirm that two protesters have boarded the Brent Alpha platform and one has climbed onto the Brent Bravo concrete legs.

‘Their safety and that of our workers are our prime concern at this moment.

‘Our proposals were submitted only when we were convinced they were the best option: safe, environmentally sound, technically achievable, and socially responsible.’