A teenage boy who helped a friend escape a shark attack at a popular surf beach on the Bellarine Peninsula says his only thought during the incident was making sure the injured girl got back to safety.

Jack Shaw, 15, was bitten on his back by a shark as he tried to free the teen girl’s leg from its jaws during a swim in neck-deep water at the Ocean Grove main beach on Monday about 7pm.

“I did my best to get it off [her leg]. I started smacking at it and trying to pick it up and get it off,” he told Nine News.

“It was not too strong, not too big … I grabbed her and turned around and it got me on the back. And then I said ‘Swim!’ and we [went] as fast as we could back in to shore.”

The 15-year-old girl was taken to University Hospital Geelong in a stable condition with shark bites to her leg and hand. She was expected to undergo surgery for her injuries on Tuesday.

Jack was also admitted to hospital but was released after receiving stitches in his back. 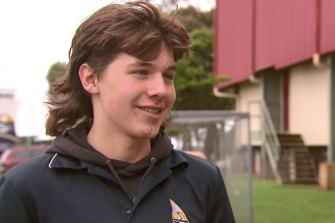 Jack Shaw was bitten by a shark as he saved a friend at Ocean Grove on Monday night.Credit:Nine News

He said on Tuesday that all he could think about as the attack happened was, “there’s a shark, get it off and get out of the water”, as he tried to keep his friend calm and ensure she could make the swim back to land.

The friends were helped out of the water by a pair of off-duty lifeguards and onlookers who had heard their cries for help.

“Because she was screaming, a guy with a surfboard came out, and we told him what had happened. We put her on the surfboard and carried her back to shore,” he said.

“I told them, ‘Don’t worry about me, get her.’ We only called in one ambulance at first, because it was just for her. Then we realised my back was bloodied up.” 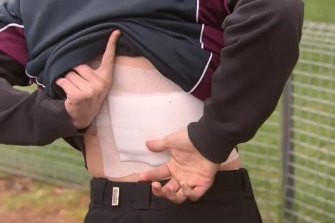 Jack said school friends and family did not believe what had happened at first. His mother had texted: “Pics or it didn’t happen.”

Peter and Dianne Hobbs, who were at the Ocean Grove beach on Monday night with their children Ella and James, rushed to help after the attack.

“We just initially thought they were playing, and before long they started yelling out that they had been bitten by a shark,” Mr Hobbs told Nine’s Today.

“We were still in a state of disbelief, but we just went into action stations really.” 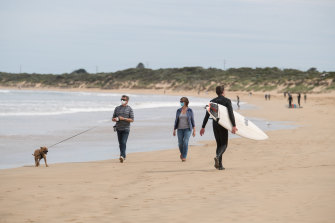 Mrs Hobbs, a former trauma nurse, used towels to tourniquet the girl’s right leg, which had a large bite mark.

“Thanks to all involved with this incident, especially our off-duty members and the brave bystanders who assisted the patients until paramedics arrived,” the organisation said on Twitter.