It’s super dog! Brave German Shepherd Bella is given a bionic FACE after her skull was shattered ‘like a jigsaw puzzle’ when she was run over by a motorbike as a puppy

A brave German Shepherd has been given a bionic face after her skull was shattered when she was run over by a motorbike.

Adorable puppy Bella was just nine months old when she was hit by the bike, running across the road near her home in Derbyshire, last October.

Bella, now 15-months-old, had been left fighting for her life with multiple skull, nose and facial fractures, which left her ‘looking like a jigsaw puzzle’.

Against all odds, the pooch made a full recovery, with the aftermath of the accident now being invisible to the naked eye. 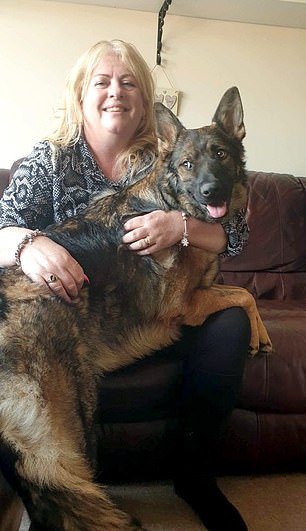 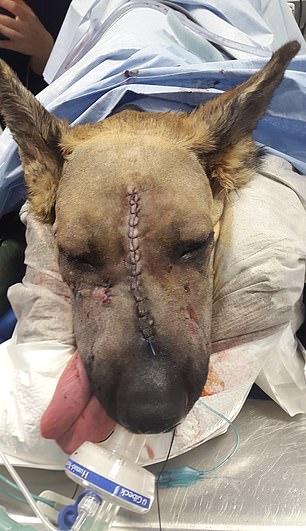 Owner Maria Williams (left with Bella) said after Bella was hit, all she could remember was her pooch’s face pouring with blood (Bella, right after the surgery) 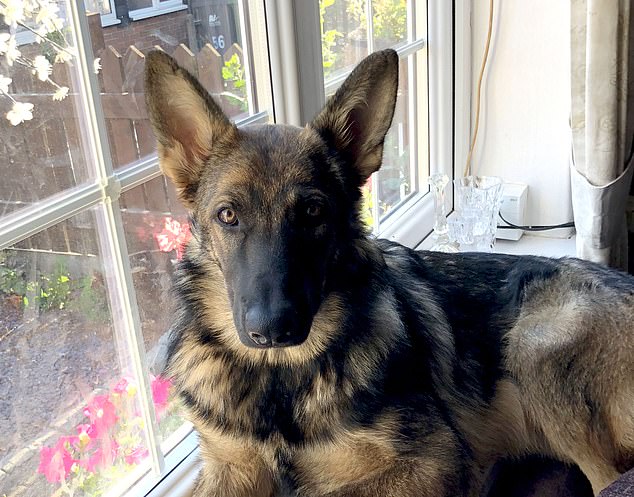 Bella, pictured above before the accident, had ran into the road and was hit by a motorbike 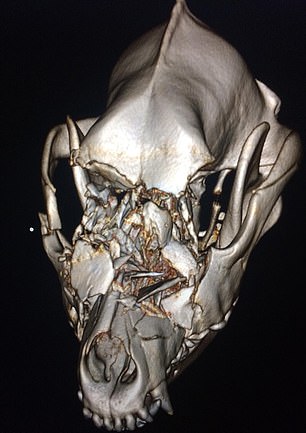 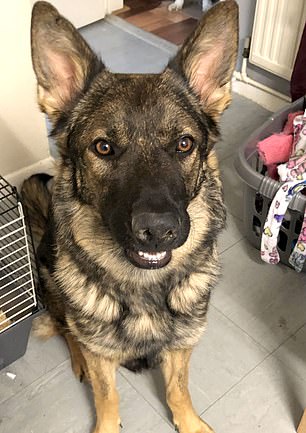 A scan of Bella’s skull pre-surgery (left) showed the seriousness of her injuries. Following the surgery (right) Bella is back and fighting fit, and only has a small scar to show for her ordeal

Vets used titanium mesh in pioneering two hour facial reconstruction surgery to get Bella back to her best.

Owner, Maria Williams said: ‘I had been looking after my three grandchildren for my daughter while she was at work and was them ready for bed when I sent the youngest one, Logan, four, downstairs after he’d brushed his teeth.

‘He saw some family members arrive at the door so he went to open it and Bella bolted out the door and straight into the road and was hit by the motorbike.’

The 49-year-old said when it first happened, all she could see was Bella’s face pouring with blood.

‘It looked like her jaw had fallen off – every bone in her face was smashed.

‘I’d never heard of anything like this surgery before but I don’t think she would have survived unless she’d had it.’

Maria, pictured above, said: ‘We’re so grateful to the vets for everything they did for her, they’ve done a fantastic job’

The mother-of-two added that all there is left to show for the surgery is a small scar.

‘I can’t believe you can barely see she’s even had surgery – she has a tiny little scar under her eye, but you can hardly notice it.

‘We’re so grateful to the vets for everything they did for her, they’ve done a fantastic job.

‘We all call Bella the super dog, I don’t think there’s many other pets that could survive what she’s been through.’

Following the accident, Bella was rushed to Pride Veterinary Centre in WHERE, Scarsdale Vets’ state-of-the-art referral hospital, to be stabilised and given her painkillers.

First, animal medics had to remove small loose pieces of bone from Bella’s nose and skull and she was then monitored in intensive for two days before the emergency surgery.

The life-saving pair then used the titanium mesh to stabilise Bella’s multiple fractures and reconstruct her face – with the material only ever previously used in elective brain and cancer surgeries. 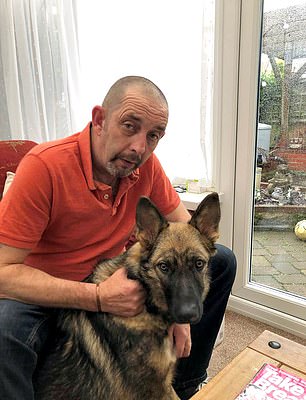 Mark Williams, pictured above with Bella, who managed to survive the intense surgery

The operation was a huge success, with the pup able to eat by herself within two days and quickly discharged before having her stitches and dental frame removed just weeks later.

The team believe this is the first time this type of surgery has ever been done in the UK on a trauma case in a dog.

There are just a handful of recorded cases of similar operations globally, and Rosario now plans to publish Bella’s case in a scientific journal.

Rosario said: ‘When we saw the CT scan of Bella’s face, it was like looking at a jigsaw puzzle.

‘To our knowledge, this is the first time this type of surgery has been done in the UK on a trauma case in a dog and it’s certainly the first time it has been carried out at Pride.

‘Bella will have another CT scan later this month to check on her progress, but so far the mesh isn’t causing her any problems and her teeth and jaw close perfectly again.’

Cosmetically, you would never know she had been in such an accident.

‘Given her initial CT scans, this is something we are very proud of too.’