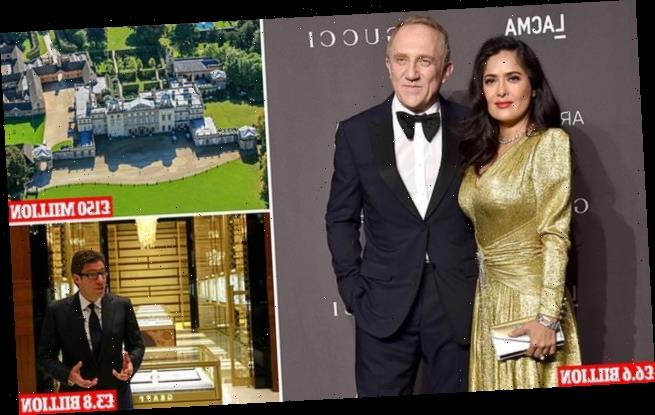 EXCLUSIVE: Give us our cash back! Furlough fury over super-rich – including scions of the Gucci and Graff dynasties – who are worth a total of £19 billion, but still demand British taxpayers’ money to pay their workers

The billionaire heirs to the Gucci fashion and Graff diamond fortunes are among the fabulously wealthy business owners whose companies have used the taxpayer-funded furlough scheme to pay their staff, a Mail on Sunday investigation can reveal.

Our probe has uncovered how despite personal fortunes of hundreds of millions of pounds, some of Britain’s richest landowners are also dipping into the fund set up to support firms struggling to survive in the pandemic.

Official documents seen by this newspaper show that companies owned and run by super-rich individuals with a combined personal wealth of £19.4 billion have taken money from the emergency scheme Chancellor Rishi Sunak launched last year to protect hundreds of thousands of jobs. 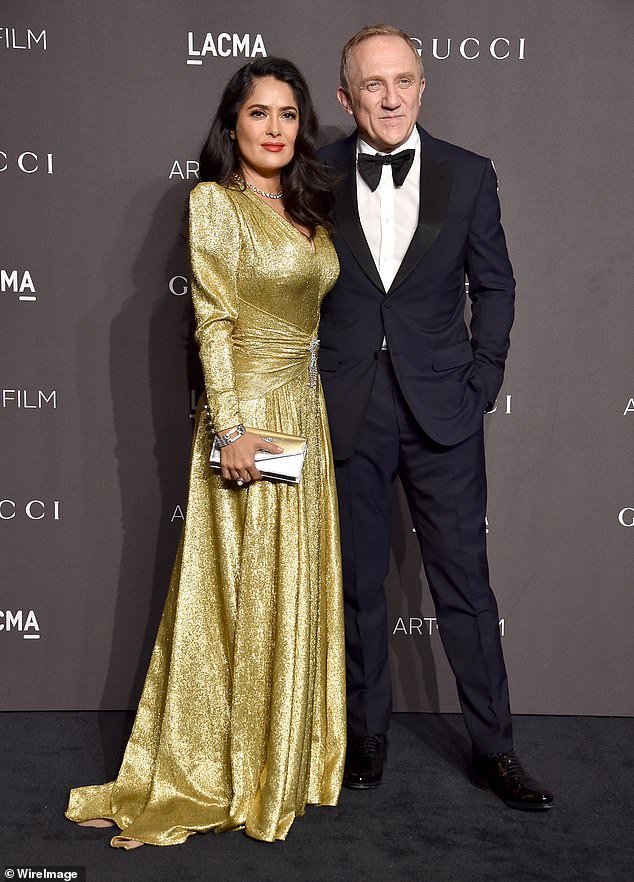 Now The Mail on Sunday can reveal how staff were furloughed at London’s exclusive auction house Christie’s, which is owned by Francois-Henri Pinault (pictured with Salma Hayek) 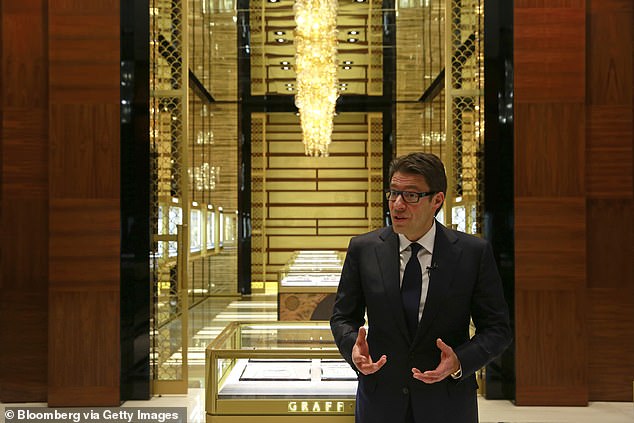 Our research follows a separate investigation yesterday which found billionaire tax exiles, Saudi royals and the Qatari owners of Harrods and The Ritz are behind firms that have received millions from the programme.

Their behaviour is in stark contrast to other high-profile companies which have chosen to meet the extra costs brought about by Covid themselves, without turning to the taxpayer for help.

Although none is breaking rules, critics argued that allowing such incredibly wealthy people to take advantage of the scheme went against its spirit and would anger hard-working taxpayers who are footing the bill.

Conservative MP Alexander Stafford, who sits on the Commons Business Select Committee, hit out, saying: ‘The furlough scheme was never meant to allow companies to abrogate all responsibility. Those who could afford not to take the money should not have done so, and if they did they have a moral duty to pay the money back. The taxpayer should not be subsidising well-off companies with a scheme that was designed to save jobs.’

Fellow Tory MP Tom Hunt added: ‘People who have struggled to get through this pandemic will be furious to know that firms run by billionaires are effectively being subsidised in this way.

‘Individuals with this sort of extraordinary wealth should surely shoulder the burden themselves before asking the taxpayer to foot the bill. I’m sure they are not breaking the letter of the furlough scheme but in my view they are certainly breaking the spirit of it.’

The revelations come just weeks after the Government announced the programme – in which the state covers up to 80 per cent of the salary of every staff member kept on payroll but placed on temporary leave during the pandemic – will be extended until the end of September.

The scheme was launched last year amid fears that many small businesses would struggle to stay afloat as the economic effects of the crisis hit home. Taxpayers have so far stumped up £53.8 billion to meet its cost. Yesterday, it was revealed that beneficiaries of furlough included the Qatari-owned Harrods and The Ritz, which claimed up to £2.5 million and £500,000 respectively; the office of the ruler of Dubai, Mohammed bin Rashid al-Maktoum, which claimed up to £55,000; the luxury hospitality business owned by Jim Ratcliffe, a Monaco tax exile worth an estimated £12 billion, which claimed £600,000; and media company First Access Entertainment, owned by Len Blavatnik, who has a net worth put at £15.8 billion, which claimed up to £10,000.

Now The Mail on Sunday can reveal how staff were furloughed at London’s exclusive auction house Christie’s, which is owned by Francois-Henri Pinault, the French scion of the Gucci fashion empire. Pinault, who is married to Hollywood actress Salma Hayek, has a personal fortune of £6.6 billion. The dashing 58-year-old heads a luxury fashion conglomerate with a stable of elite fashion brands which also includes Yves Saint Laurent and Alexander McQueen.

After his wedding he threw a £2.6 million party attended by Penelope Cruz, Charlize Theron and Bono. The couple also own two £10 million mansions in Bel Air, Los Angeles. 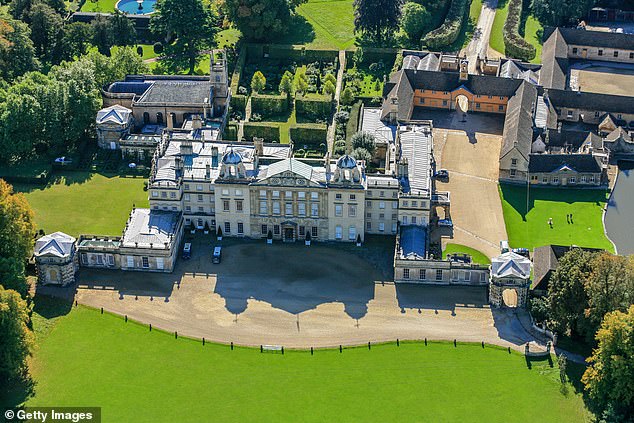 Meanwhile, taxpayers’ money has been used to support the Badminton Horse Trials organised by the Duke of Beaufort, Henry Somerset, who owns land and art worth £150 million

Christie’s, which also has outlets selling fine art and antiques in Paris, New York and Shanghai, makes annual sales of around £5 billion. Despite this huge wealth, records for December – the only month for which information is available – reveal that Christie’s claimed up to £25,000 to pay staff wages through its auction house subsidiary Christie Manson & Woods. It declined to comment last night.

Documents also show how Graff Diamonds International used furlough cash to pay staff at its upmarket London jewellery shops in Sloane Street, New Bond Street and Harrods. The firm is run by Francois Graff, the British heir to the empire, who boasts a £3.8 billion fortune.

Company accounts show the business, whose clients include Donald Trump and Oprah Winfrey, earned the Graff family a dividend of £86 million in 2018.

Francois’ 82-year-old father Laurence owns a string of properties in Mayfair, a 146ft superyacht, a vineyard in South Africa, and a modern art collection which includes Roy Lichtenstein’s pop art painting, Woman With A Flowered Hat, worth £40.3 million. However, Government records show Graff Diamonds International claimed up to £100,000 in furlough cash in December.

Meanwhile, taxpayers’ money has been used to support the Badminton Horse Trials organised by the Duke of Beaufort, Henry Somerset, who owns land and art worth £150 million.

The cross-country event takes place in the grounds of his 52,000-acre estate in Gloucestershire every May. Staff there were furloughed after the trials, which usually attract 250,000 visitors and is a favourite with the Duke and Duchess of Cambridge, were abandoned last year because of Covid.

The Duke lives in the 38-bedroom Badminton House with his journalist wife Georgia. He also owns West London art gallery Marlborough Fine Art, which Companies House records show had assets worth £9.7 million in 2019. Further income is derived from the farm on his land. Badminton Horse Trials declined to comment last night, but figures show it claimed up to £10,000 in December.

Firms run by one of Scotland’s largest landowners Richard Scott, Duke of Buccleuch and Queensberry, who is worth £253 million, have also benefited from the scheme. As well as owning 217,000 acres of rural land, his valuable art collection includes paintings by Gainsborough and Dutch masters.

He also owns antique furniture worth an estimated £150 million. Records show up to £10,000 of taxpayers’ money was used to furlough staff who work in the gift shops, cafes, gardens and restaurants on his Highlands estate. His portfolio includes Dalkeith Country Park outside Edinburgh, and the Queensberry Estate, home to the Duke’s Drumlanrig Castle, a 17th-Century palace with 120 rooms.

Benny Higgins, executive chairman of Buccleuch, the management business that looks after the estates, said: ‘Like many similar rural enterprises, our tourism and leisure services have been seriously affected by the Covid-19 crisis. Action had to be taken to protect jobs and employees’ rights and a number of staff were placed on furlough leave.’

Staff have also been furloughed in the hotels and offices of property tycoons Ian and Richard Livingstone, who are believed to have a £3.9 billion fortune. The secretive brothers cashed in during the pandemic when their stake in online gambling firm Evolution Gaming nearly doubled, delivering a paper profit of £671 million in June 2020.

They have reportedly collected more than £700 million in dividends through their firm, London and Regional Property. Government data indicates the firm claimed up to £10,000 in December. The brothers declined to comment. Danish clothing magnate Anders Holch Povlsen’s company Bestseller has claimed funds to pay staff in its UK stores that helped propel his wealth to £4.7 billion.

Povlsen, 48, spent around £100 million buying up 220,000 acres of the Highlands’ grandest estates, including Aldourie Castle on the banks of Loch Ness.

The tycoon won praise for repaying nearly £300,000 he received from the furlough scheme for 50 staff in his conservation business Wildland. But The Mail on Sunday can reveal that he was still using taxpayer money in December to pay for 75 staff at Bestseller.

The company now has 100 people on the scheme and has claimed up to £25,000 to furlough staff. It has also been financially supported by its parent company in Denmark. A spokesman declined to comment.