Decades of unrest, deadly conflict and peaceful campaigning for independence in a tiny group of islands north-east of Australia could soon culminate in the world's newest country.

Voting has begun in the Bougainville independence referendum, where Bougainvilleans will finally have a chance to provide a definitive answer to the question of whether they want to secede from Papua New Guinea.

Australia has long had an interest in the fate of the tiny Melanesian islands, about 1600 kilometres from Cairns. The fates of the nation and the nation-in-waiting have been inextricably linked since the end of World War II.

So what exactly is Bougainville? What happens there? How likely is independence? Will the referendum end their struggle? And what would the new nation look like? 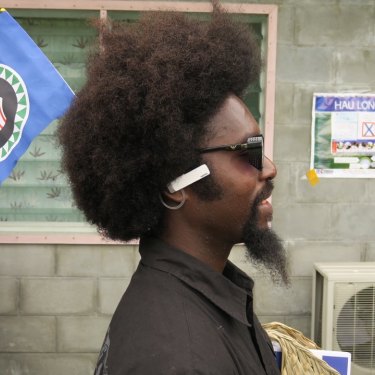 A man plants a Bougainville flag in his hair as he queues up to vote on the opening day of the territory's independence referendum.Credit:Ben Bohane

Bougainville is a cluster of islands north of the Solomon Islands and east of the island of New Guinea. The main island is – you guessed it – Bougainville Island. To the north is the far smaller island of Buka. A number of smaller islands and atolls also speckle the surrounding territory.

Although PNG retains dominion over the islands, they are closer to the Solomons, both geographically and culturally. As well as being the largest island of the Solomon Islands archipelago, Bougainville was sometimes referred to as North Solomons: the name given to the islands when separatists declared independence from PNG in the mid-70s. At that time, PNG and its territories were under Australian administration. That secession attempt was ultimately unsuccessful, however the name stuck and Bougainville is still sometimes known as North Solomons. The name comes from the French explorer Louis-Antoine de Bougainville, who visited in 1768.

What exactly is Bougainville and why isn't it independent?

Right now, Bougainville is not quite a country but not quite independent. It has its own parliament, its own borders and its own laws allowed under its status as the Autonomous Region of Bougainville.

That special status was granted to the islands during negotiations that followed a bloody, decade-long civil war. That war saw the secessionist Bougainville Revolutionary Army fighting PNG forces and other pro-PNG forces from 1988 to 1998. Some 20,000 people died during the conflict, many from disease and lack of medicine due to a naval blockade, out of a population of about 250,000. A peace agreement was finalised in 2001. 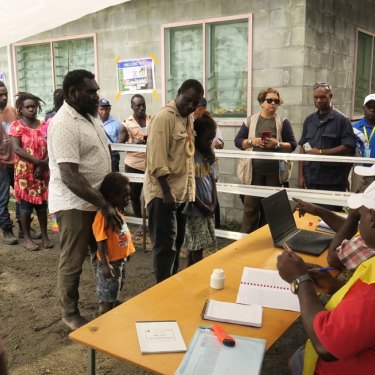 The first people to vote in the Bougainville independence referendum in the capital Arawa were the former commanders of the BRA (Bougainville Revolutionary Army) Ishmael Torama and Chris Uma, centre, standing with their children.Credit:Ben Bohane

Why have we heard so much about the Panguna mine?

Bougainville housed one of the world's largest open-cut copper mines through the '70s and '80s. At the time, the Panguna mine accounted for more than half of Papua New Guinea's export earnings. Thousands of workers, not all of them from Bougainville, staffed the mine, which was operated by Rio Tinto subsidiary Bougainville Copper.

Bougainvilleans felt they saw little of the profits from the hugely successful mine, which fuelled discontent among local landowning groups. It was, ultimately, one of the major factors contributing to the outbreak of civil war in the late '80s. 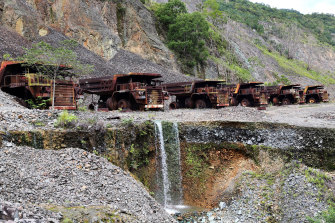 The Panguna copper mine closed down in 1989 after it was sabotaged by revolutionaries.Credit:Alamy

In May 1989, the guerilla forces of the Bougainville Revolutionary Army forced the closure of the mine. Attempts to revive it since the peace agreement of the early 2000s have been unsuccessful. But the economic success of the emerging nation – which otherwise relies on copra (a coconut product), cocoa and timber exports – could depend on resurrecting the huge facility once described as the "jewel in the crown" of Rio Tinto.

The mine was recently valued at $84 billion. 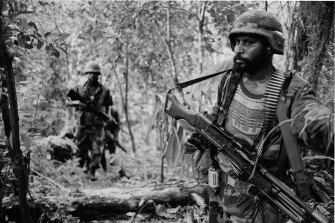 PNG army troops on patrol in heavy jungle in 1997, hunting for guerillas who had shot a boy dead nearby.Credit:Ben Bohane

The result of the referendum is non-binding. Any lasting action to follow the vote will require consultation between the Autonomous Bougainville Government and Papua New Guinea's central government, followed by ratifications in PNG's Parliament.

There is a possibility that the people of Bougainville could support independence then have it denied to them by the PNG government in Port Moresby; or it may be denied if a majority of 111 MPs in Parliament don't ratify it.

In a statement issued in October, PNG's new Prime Minister, James Marape, did not explicitly commit to backing independence.

He thanked the people of Bougainville for their pursuit of a political solution to the conflict.

"The people of Bougainville, including the Autonomous Bougainville Government, ex-combatants and former rebels who took up arms during the crisis deserve commendations and our highest respects for laying down their arms to achieve peace," he said, adding that not a single life had been lost, nor a single bullet fired since the 2001 peace agreement.

He said it showed "the maturity and greater Melanesian way" of dealing with things.

"I reiterate that the outcome of the referendum shall be deliberated on by leaders on both sides to ensure the best possible way forward for the people of Bougainville and Papua New Guinea."

What has China got to do with all of this?

China has been aggressively seeking influence and economic power in the Pacific as part of its Belt and Road initiative.

In November, Ben Bohane, reporting for The Sydney Morning Herald and The Age, wrote about revelations of a proposed Chinese master plan for Bougainville, unveiled by former Bougainville general Sam Kauona.

The offers includes included a highway, an airport, port, bridges and a luxury resort, among other developments. However, China plans to use Bougainville's mineral wealth as collateral for the deal.

"This is the first holistic offer, which has come from China," Kauona said during the unveiling.

"Where is Australia and the US and Japan? Earlier this year, I met with representatives from Fortescue mining but I have been waiting 10 months for them to make a commitment."

In November, The Age and The Sydney Morning Herald confirmed that representatives of iron ore magnate Andrew "Twiggy" Forrest's mining company, Fortescue, had travelled to Bougainville to explore growth opportunities there.

Kauona described resource-rich Bougainville as a "treasure island" but said partners were needed to help "build a nation, not just exploit our resources". Covid-19 restrictions will 'stay for at least a year' even if vaccine is found, scientists warn

Teachers union chief threatens legal action against de Blasio over coronavirus spike
We and our partners use cookies on this site to improve our service, perform analytics, personalize advertising, measure advertising performance, and remember website preferences.Ok