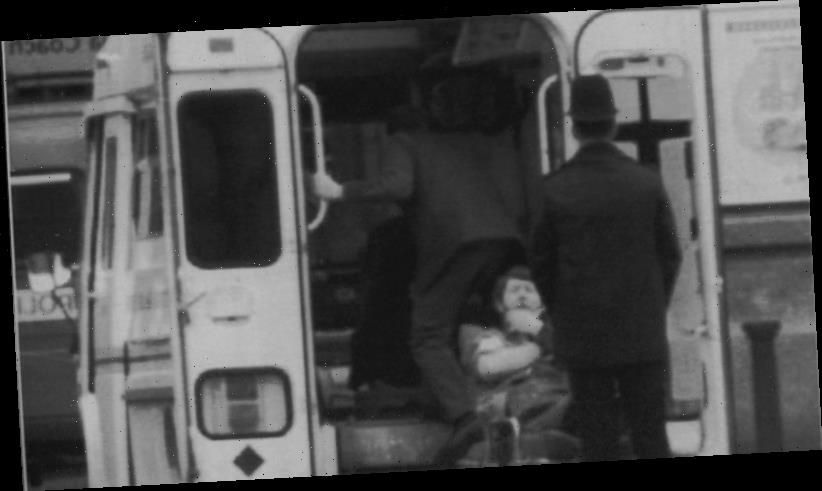 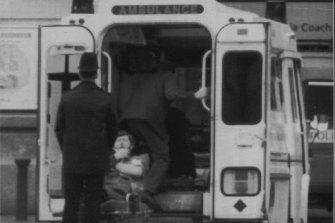 An injured traveller is stretchered into an ambulance at London’s Victoria Station following the blast.Credit:AP

At least one person was killed and more than 35 others were hurt in a bomb blast at Victorian Station during the morning rush hour today. Another bomb had earlier exploded at Paddington Station but no one was injured.

The blasts brought central London to a standstill. Anti-terrorist police sealed off the concourses within minutes of each explosion and British Rail closed all mainline stations, throwing the rail system into chaos and trapping thousands of passengers in trains forced to a halt.

The head of Scotland Yard’s anti-terrorist branch, Command Churchill-Coleman, told a press conference that a man with an Irish accent telephoned London Transport at 7 am, said he was from the IRA and warned that bombs would go off at all the city’s 11 main-line stations in 45 minutes. Police chose not to order a mass evacuation after the call, saying the “warning was too late and too vague.”

If these explosions are indeed the work of the IRA, they will be the first against obvious civilian targets in London since the Harrod’s blast of 1983, which killed six people and injured many others.

Earlier this month, an IRA hit-team fired three mortar bombs at the Prime Minister’s residence in the heart of London, slightly wounding four people and shattering the windows of the room where Mr Major was chairing his war Cabinet.

Today’s wounded were taken to Westminster and St Thomas’s hospitals, where spokesmen said at least eight were seriously wounded. A man in his 30s, the father of a 16-month-old child, was dead on arrival at Westminster.

A consultant at Westminster hospital, Mr Jeremy Booth, said many of the victims had been hurt by flying metal. He confirmed that a 12-year-old boy was among those admitted.

The Victoria blast took place at about 7.40 am, more than three hours after a device exploded on the concourse at Paddington Station, which contained only a dozen British Rail staff members at the time. No one was hurt, but structural damage was caused to the Paddington station building.

Victoria Station was crowded with commuters when a bomb apparently hidden in a garbage bin behind a self-service ticket machine, blew up and showered people with glass.

Commander Churchill-Coleman said the devices at Victoria and Paddington were “high explosive.”

One of the victims of the Victorian explosion, Mr Matthew Cyprus, who lost part of a foot, said in hospital: “I was standing on the platform and there was a blinding light followed by a noise which came towards me and then I fell over on the floor.

Other witnesses spoke of a “shocked silence” for 30 seconds before people began screaming and running.