Rome, 13 May – Pope John Paul was shot twice in the stomach by gunmen in St Peter’s Square today. Vatican Radio said no vital organ had been hit. 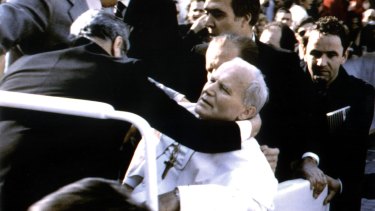 The Polish-born Pope, who is almost 61, had emergency surgery in the Vatican’s Gemelli Clinic.

The Pontiff was shot as he entered St Peter’s Square in the papal jeep for a general audience before about 10,000 people.

“His condition is less grave than had at first been thought,” the radio reported later. It said two bullets had been removed.

A series of shots rang out and the people in the square saw the Pope fall to the floor of the jeep.

Members of the crowd leapt on a dark-haired man immediately after the shooting. He was hustled away by police.

Later, the Associated Press reported police sources as saying one of the men being held was a 30-year-old Arab student at the university for foreigners at Perugia, north of Rome.

Police said two women were also wounded by the bullets. They identified one as Anne Odre of the United States. She was not in a serious condition.

The arrested gunman told police he was born in Turkey. The Italia news agency identified him as Mehmet Ali Agca, 23.

Italian television said the suspect spoke to police in English and quoted him as saying he “didn’t care about life.” 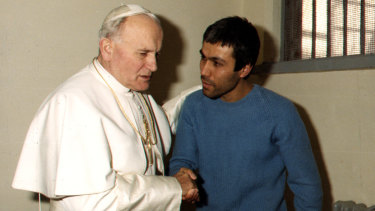 Back in St Peter’s Square the crowd wept and prayed when the loudspeaker announced that the Pope’s condition was grave and asked for prayers for his life. The loudspeaker led the prayer Our Father and Ave Maria.

But a few minutes later, the crowd was told that the Pope’s condition was not as bad as was first feared.

Vatican Radio broadcast prayers and hymns for the Pontiff.

Work stopped in Parliament as deputies and secretaries rushed to watch the bulletins on television.

In Washington, President Reagan, told that the Pope had been shot, said: “I’ll pray for him.”

Mr. Reagan, himself a victim of a would-be assassin only six weeks ago, was told of the shooting by Presidential counselor Mr. Edwin Meese.

In New York, the United Nations Secretary-General, Dr. Waldheim, said he had “just heard with shock and dismay of the attempt on the life of His Holiness the Pope.”

Father Sullivan, the private secretary to the Archbishop of Sydney, Cardinal Sir James Freeman, said this morning; “The church in Sydney is greatly shocked by the attempted assassination of Pope John Paul II. Catholics and people of all denominations will be praying for his speedy recovery. 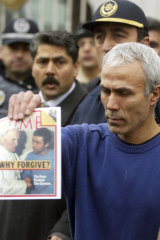 Mehmet Ali Agca, being released from prison in Istanbul in 2006. Agca served more than 25 years in prison in Italy and Turkey for shooting the Pope and killing a Turkish journalistCredit:AP

The first non-Italian Pope in 455 years, John Paul II started his reign in 1978.

He took the name John Paul after his predecessor, who died within weeks of being elected.

There had been at least two attempts to assassinate the Pope.

The first was on 8 November, 1979. A man with a knife was stopped as he tried to enter the Vatican. The man later said that he planned to kill the Pope. Police later charged the man, 26-year-old Luciano Esposito with attempted murder.

The second suspected attempt was in Karachi, Pakistan, on 16 February, 1981.

A bomb exploded in the city’s National Stadium minutes before the Pope arrived to celebrate Mass. Police said the man carrying the bomb was killed and two accomplices injured in the blast at the rear of a VIP stand.

The next day in Manila, police arrested a man disguised as a priest who was seeking an audience with the Pope. He was found to be unarmed but the incident heightened fears for the Pope’s safety.

The question of the Pope’s safety came under special scrutiny after the attempted assassination of President Reagan.

Vatican security men are said to have been worried about the Pope’s safety for some time. Their reasons are mainly:

By the nature of his job the Pope has to mix with people. In the first weeks of his Pontificate his fellow Poles mobbed him at a special audience.

Immediately his guards – Swiss and Vatican – swarmed around him. “Thank you,” he said brusquely, breaking though his protective cordon, “but I can take care of myself.”

Papal bodyguards are trained in Switzerland and are known to be prompt and efficient if and when a crisis happens. When a crank rushed the Pope last year they whisked him away before he could recoil.