REOPENING OF THE REGENT

When in April, 1945, flames roared through the Regent Theatre to destroy stage, organ and stalls, and the elegant dome and dress circle back to the entrance aisle, Melbourne was deprived of one of the world's finest film theatres. 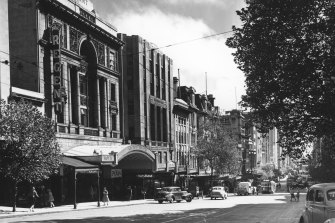 The Regent reopens after being damaged by fire in 1945.Credit:State Library of Victoria

On Friday the Regent, with its seating capacity of more than 3000, will reopen, and patrons will find the great auditorium much the same as it was two years and eight months ago.

Under the conditions of material and labour shortages, the theatre has been restored. The great chandelier, installed in 1929, gleamed down on the audience, and additional minor oriels of light illuminate the vast, spacious stalls and lounge and circle.

The old grandeur in seating has not been attempted. But all the seats are upholstered in leather cushions that sink under the body, the Wurlitzer has been restored, and the band well and stage are back to normal.

The lower foyer is the same, but changes have been effected in the upper foyer, with murals and by George Browning and Charles Bush, and a marble buffet in the centre. At the buffet refreshments will be served to patrons, who will gather to discuss the merits of the film of the night.

It is fitting that the second attraction this season will be Great Expectations, the English film of Dickens's novel, which has won acclaim elsewhere.

In other times the design of an entirely new theatre would have been achieved. But it is a tribute to the common sense of the executive management and the skill of Australian manufacturers and artisans that the old theatre has risen phoenix-like from the ashes.

It has greater symmetry in the sweep of the lateral walls, which give a sense of intimacy to the screen and the presentation stage in this vast auditorium.