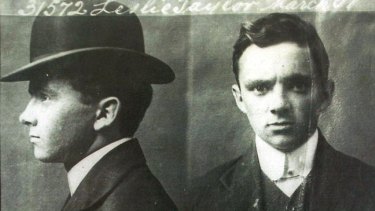 Enmity between two rival factions of men with sinister police records – enmity which has been alternately smouldering and blazing fitfully since the days of Kirkpatrick’s jewelry robber, and the promiscuous shooting which characterised what has been called the Fitzroy vendetta – culminated last night at a house situated at Barkly Street, Carlton, in a pistol duel between Leslie “Squizzy” Taylor and John “Snowy” Cutmore. A third man at present not known to police was present at the shooting. When the shooting began Cutmore’s mother rushed to her son’s assistance, and she received a flying bullet in the shoulder.

When the police arrived Cutmore was lying dead in his bed, shot through the heart. Taylor, who had been taken to St Vincent Hospital, died in the casualty ward a few minutes after his admission.

The first news of the shooting to reach police was shortly after 6 pm, when a man, giving the name of Roy Trewarne, rushed into the Carlton police station and told Constable Dee that there had been a shooting at 50 Barkly Street. Constables McDonald and Payne hurried to the house, and found Cutmore dead, and Mrs Cutmore, senior, bleeding freely from a bullet wound in the shoulder.

Almost simultaneously a telephone message was received by the Fitzroy police from the St Vicent Hospital that “Squizzy” Taylor had been brought to the hospital with a bullet wound in the right side, and had died almost immediately. Constable Souter, of Fitzroy, went to the hospital, and identified the body as that of Leslie Taylor. In one of the deceased’s pockets was an empty .32 calibre automatic pistol, and in another pocket was a box containing over 20 cartidges.

Russel Street was notified, and Detective-Sergeant Brophy, Senior Detectives Davey and Grieve, and Detectives McPhee and Milne were detailed to investigate. In the meantime Mrs Cutmore, senior, had been taken to the Melbourne Hospital by the Carlton police, and admitted. Her condition was not serious. 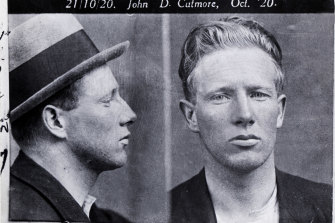 After a long investigation, in which the police were handicapped by the usual silence which surrounds underworld quarrels, the detectives were able to trace the events leading to the duel. Taylor and Cutmore they knew had belonged to rival factions in the dispute over the division of the proceeds of Kilpatrick’s jewelry robbery, which came to be known as the Fitzroy vendetta. Cutmore had been for some years living in Sydney, and had there fallen foul of the police for minor offences. He was the owner of two well-known trotting horses. Some months ago his wife, Gladys Cutmore, came to Melbourne and went to live with his mother at 50 Barkly Street, Carlton.

Cutmore returned to Melbourne from Sydney on Sunday last and joined his wife, the purpose of his visit being to attend the spring racing carnival. He was seen at the Richmond races on Monday by Detectives Milne and West, and was, on account of his past associations, ordered off the course.

Taylor was also at the Richmond races on Monday, and it is believed the two men met and exchanged threats. On Tuesday Cutmore was taken ill with influenza, and took to his bed.

According to a statement made to Detectives Brophy and Davey at the Melbourne Hospital last night by Bridget Adela Cutmore, 56 years, she was cooking tea in a detached kitchen at the rear of the house shortly after 6 pm. Her daughter-in-law had gone to the dairy for milk, and the only other occupants of the house were her son John and John King, better known as “Scotty”, who occupied a front bedroom. The front door, which opens flush on the street, was open. She heard footsteps in the passage, but as her son had a number of visitors since his return from Sydney she took no notice.

A few moments later she heard angry shouting from her son’s bedroom, followed by a fusillade of pistol shots. She rushed to the room, and has a confused recollection of seeing a man whom she could not describe, with a pistol in his hand, when she was struck by a bullet, and collapsed in the passage. More shots followed, and then two men left the house, one by the back door and the other by the front. She was later taken to hospital, and did not know until the detectives interviewed her that her son was dead.

John William Hall, a hired car driver, who took Taylor to the hospital, was taken to police headquarters and questioned. According to his statement, he was on the taxi rank in Lonsdale Street, opposite the Melbourne Hospital, shortly after 5 pm, when Leslie Taylor, whom he knew, and two men who were strangers to him, approached from the direction of the Bookmakers’ Club and hired his car. He drove them to several hotels in Carlton, and shortly after 6 pm, was ordered to pull up in Barkly Street, a short distance from the house occupied by the Cutmores. Taylor and one of the men alighted and entered the house. The other man remained in the car – a Studebaker sedan.

He did not hear any shots, but a few minutes later Taylor staggered to the door and said, “I’m shot; drive me to the St Vincent’s Hospital.” Hall and the other man helped Taylor into the car and started for the hospital. At the corner of Brunswick and Johnston Streets they were held up by the cross traffic. When the car stopped the man called out to Hall, “Here, you do the rest on your own,” jumped out of the car, and ran off down Brunswick Street. Seeing that Taylor was in extremis, Hall continued his journey to the hospital.

When Detectives Grieve, Milne and McPhee reached 50 Barkly Street, the room in which Cutmore’s body was lying was in the utmost confusion. The floor was littered with empty cartridge cases, fourteen of which were picked up on the floor. All four walls bore bullet marks, a mirror had been smashed by a bullet, and half the chimney of a kerosene lamp on the table had been shot away. There was also a bullet hole through the bed mattress. Cutmore was lying on the bed shot through the heart, and had a second bullet wound in the little finger of his right hand. There was no sign of any pistol in the room, and the other inhabitants of the house deny all knowledge of one.

“Scotty” King was interviewed, but convinced the detectives that he knew nothing of the shooting. He is now employed on the wharfs, and told Detective Grieve that he had had a number of drinks, and was asleep in his room. A man name Churchard, who also occupied a room in the house, is believed to have been absent during the shooting.

An examination of Taylor’s body disclosed a bullet wound in the right side, the bullet apparently travelling upward. An inch below the wound was a bruise as if a second bullet had been deflected by some object in his waistcoat pocket. He was unconscious when he arrived at the hospital, and died without regaining consciousness. From the nature of Taylor’s wound, and the presence of bullet marks through the bed mattress, the police believe Cutmore was lying on the bed when the shooting occurred, and shot, and was shot at, from that position.

The detectives are convinced that the shooting was the recrudescence of the old bitterness associated with the Fitzroy vendetta, and that the two men were the only ones concerned. They think that Taylor, after fortifying himself with sufficient liquor, went to the house to renew the quarrel begun on Monday at the racecourse. They expect to locate Taylor’s two companions, one of whom they claim was an eyewitness of the shooting, but not a participant. The whole resources of the Criminal Investigation Branch are being concentrated on tracing these two men, both of whom can be identified.

Both dead men are well known to police, though Cutmore has not been convicted of any serious offence. The best remembered episode in Taylor’s many police experiences was his trial and acquittal in connection with the Heidelberg road murder in 1912. He was 35 years of age, and Cutmore 33. Both bodies have been removed to the morgue.

The man who reported the shooting to the Carlton police is strongly advised to communicate with the detective office at once.