From hope to horror: Vivid artwork by freezer killer’s victim gives glimpse into her once-happy life – as it emerges serial sex offender who married 14-year-old child bride was repeatedly visited by police while two women were frozen in his cooler

Heartbreaking artwork and writings from one of the victims of freezer killer Zahid Younis has emerged showing her once happy life with her murderer.

Henriett Szucs and Mihrican Mustafa – also known as Jan – were discovered in his east London flat in April 2019 and he was sentenced to life in prison with a minimum term of 38 years this week.

But poignant mementos from one of the two victims’ lives with Younis, 36, showed the evil way he had charmed her before turning against her.

Evidence collected by the Crown Prosecution Service show Henriett – known as Henri – had an incredible artistic flair as well as talent for writing. 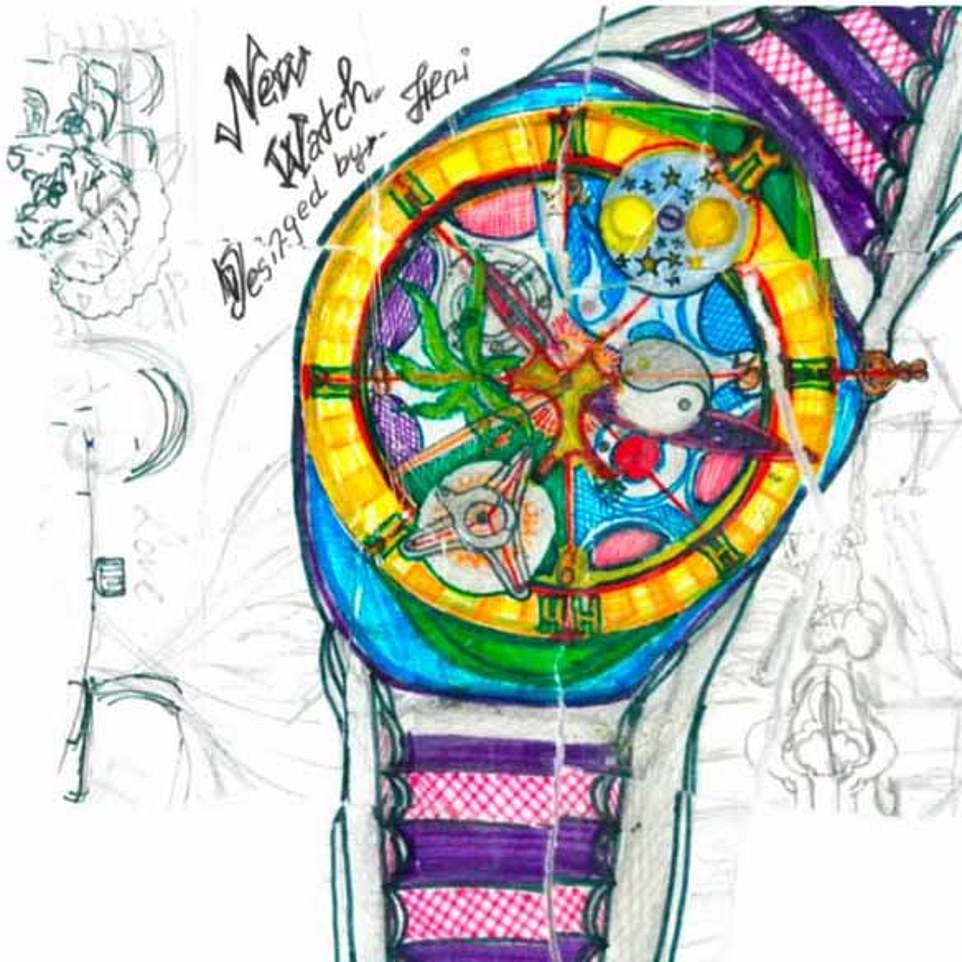 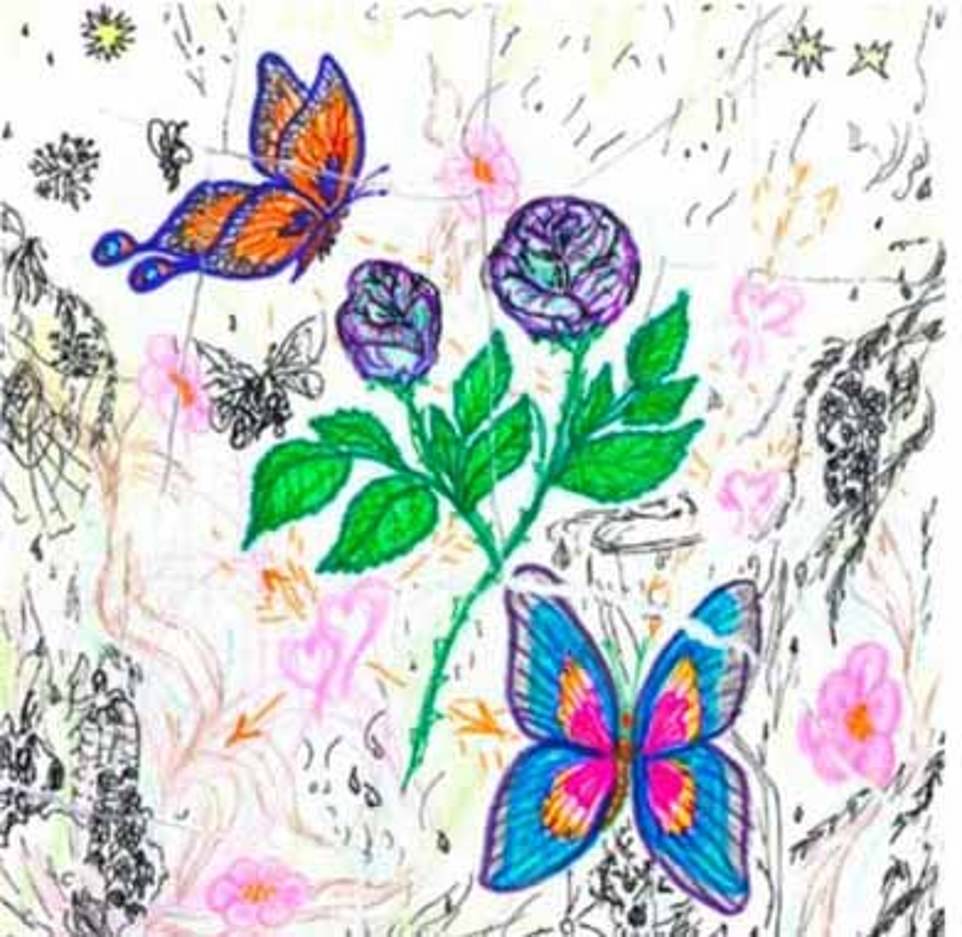 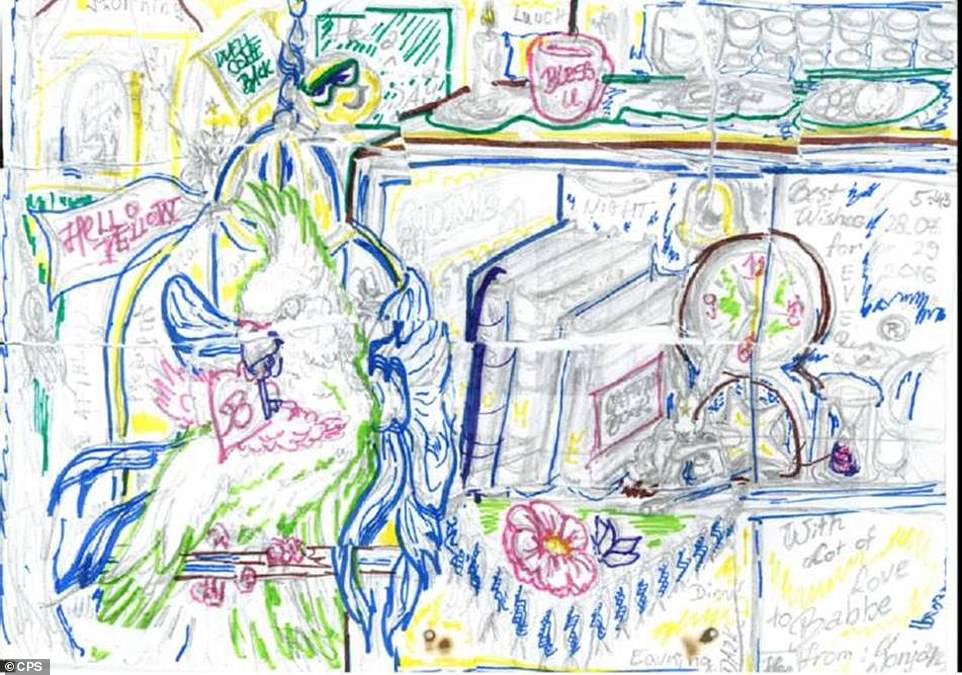 Another picture appeared to have been left uncompleted and showed a parrot, clock and books as well as a ‘bless you’ mug

She had been made homeless and found help at an Ilford charity called the Wellcome Centre before she eventually came to know Younis.

Manager Sonia Lynch told the BBC: ‘I think maybe in her drawing that’s where her pain may have been.

‘She didn’t really speak much about the difficulties of rough sleeping and being homeless.

‘But she didn’t speak about it much, preferring to be on the positive side.’ 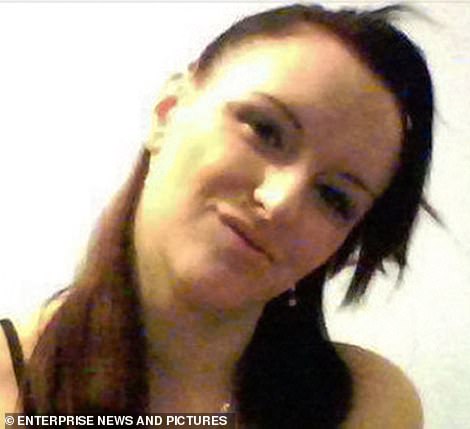 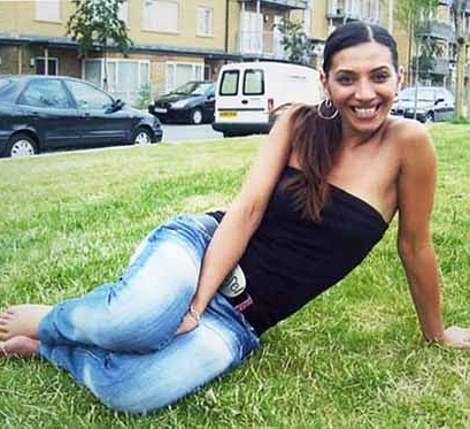 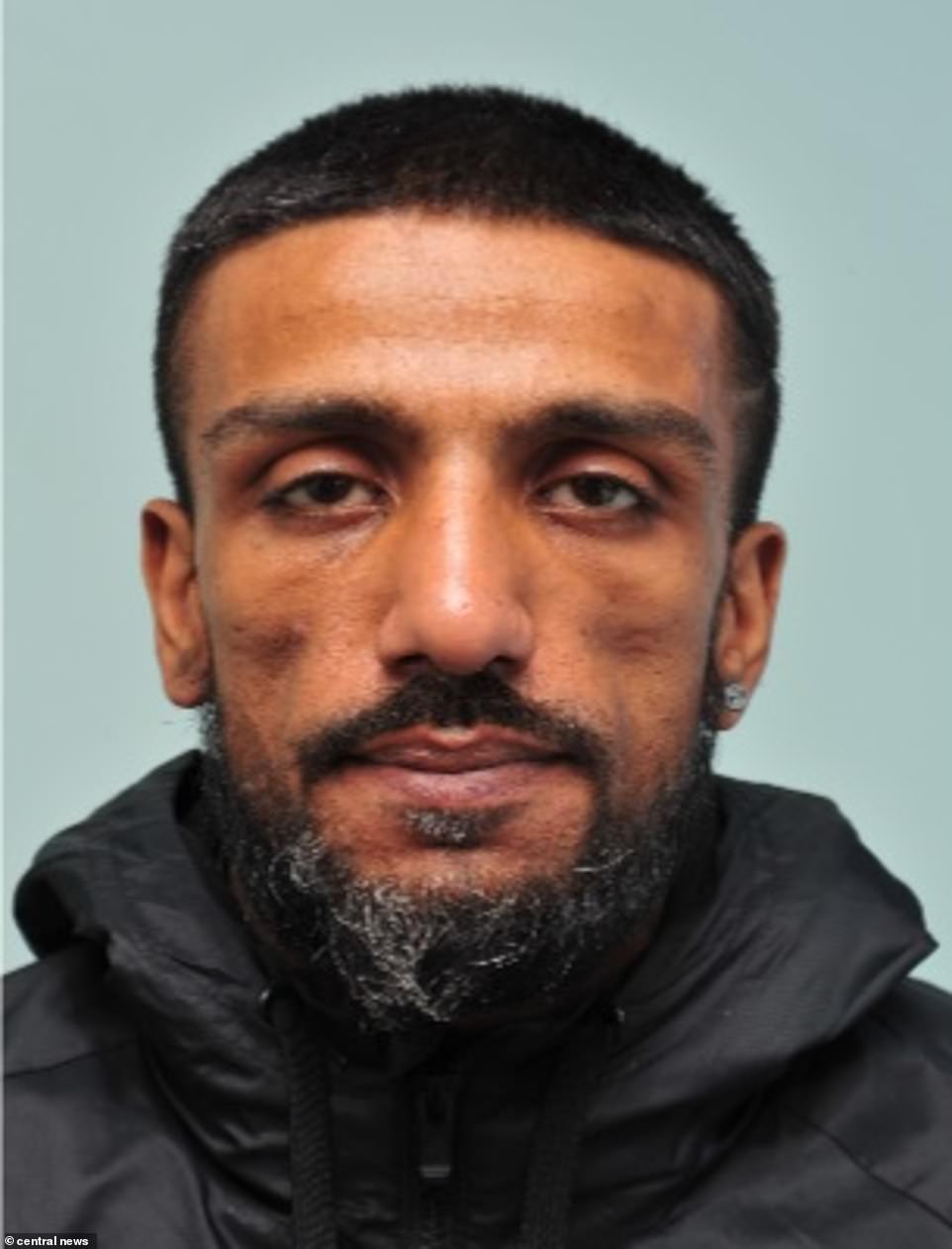 Evil: Freezer killer Zahid Younis, 36, was jailed for life with a minimum of 38 years for killing the two innocent women

Police were monitoring him but he got away with murdering her and another woman Jan Mustafa.

They even visited his home asking about Jan’s whereabouts will both women were hidden murdered in his freezer.

Heart-rending notes from Henri found after their bodies were uncovered showed how deeply she had been in love with the brute. 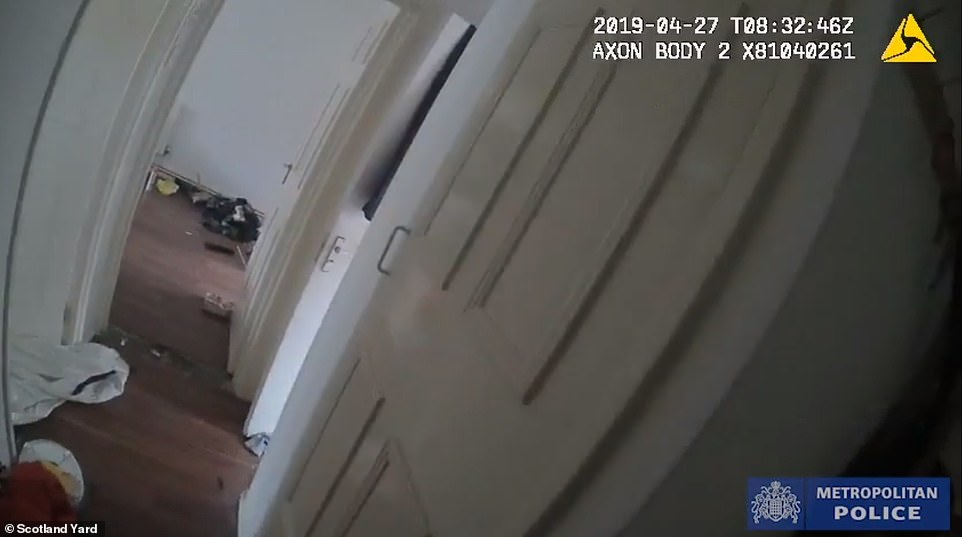 Bodycam footage released by Scotland Yard showed police officers searching the flat before they made the grim discovery in April last year, with one detective heard saying: ‘There’s a freezer here I want to get into but it’s locked’

How the double murderer preyed on vulnerable women

Double murderer Zahid Younis has a history of preying on the vulnerable.

Both of the women he murdered and left in a freezer had led somewhat chaotic lives – they had been homeless at times and had struggled with drugs. They were easy to manipulate.

Investigating officer Detective Chief Inspector Simon Harding, of the Metropolitan Police, said: ‘Zahid Younis is a particularly dangerous and what I would describe as a repugnant individual who preys on vulnerable women in particular and abuses them, brings them into his control and causes them significant injury.’

He described Younis’s life as ‘a pattern of lies’, adding: ‘He is a person who uses drugs and would manipulate and lie to people to get money.’

Ms Szucs had last been seen in August 2016 and Ms Mustafa in May 2018. Their bodies were found in a padlocked freezer with flies swarming around it at Younis’s flat in Vandome Close, Canning Town, in April 2019.

The grim discovery was made by a uniformed police officer who had only gone to the flat in search of Younis after he had been reported as missing.

DCI Harding said the freezer was forced open by one of the officers on ‘an old-fashioned police hunch’ about what was inside it.

He said: ‘He broke open the freezer and discovered what could only be seen, at the time, as only one body.

‘It actually took the freezer being taken away and X-rayed for it to be seen there was another body underneath that. It was a gruesome discovery for the officers.’

The ‘horrendous scenes’ faced by his team, who are trained for their jobs, is nothing compared to the ‘bravery’ of the victims’ families whose ordeal has spanned, not just their loved ones’ disappearance and killing but now also this court case, he said.

Members of Ms Mustafa’s large family have been at the trial at London’s Southwark Crown Court every day and Younis showed no remorse as he denied murdering them.

Others took a more sinister turn: ‘So the day is today the day when you my love telling me the true about your love 4 me is really so deep. You gone Marry me or not???’

‘Dear Zahid! Hope one day you gone wake up in a good [mood], not the boxing ring side’.

‘Will learn more to keep my mouth shut whe I need to listen, and talk up when I need.’

‘Keep distance away from Boxer. Follow the things point to point what he says. Give him space, and show him respect.’

‘How can love turn into hatred just like that? Everything you promised is no more than a shattered dream. I got disillusioned as a result of some really big slaps in the face!!! When I admitted my sins, you judged and expelled me from the inner circle and planted poison in my broken heart that was anyway stone-cold by then. This poison has been tormenting and burning me. I’m afraid of dying and I don’t want to hate you!!!’

The trial also heard when she was due to attend the trial of an ex who had been charged with rape but texted police to say she was so sick she could not attend court.

Papers found in Younis’s home seemed to confirm he had told her not to go and how to avoid attending.

The police last saw her on August 2016 with him where he was cautioned for possessing cannabis.

Months later they visited his flat, where he had already killed her, but had no inkling of what had gone on.

The shameless killer was so arrogant he even called officers around there himself to make complaints. They never found Henri or Jan’s bodies.

Perhaps most worryingly he has also been revealed to have been married to a child in an east London mosque back in 2004.

His 14-year-old victim spoke in the murder trial about being too scared to go to police about him.

She said of the ‘wedding’: ‘I don’t understand Arabic so I didn’t know what I was repeating.

‘I thought he would get away with it.’

On Thursday he was finally delivered justice, although cowered in his cell to avoid the hearing.

Mrs Justice Cheema-Grubb said: ‘It will surprise no-one in this room that the defendant has declined to attend his sentence, while he sits in the cells below, but I will address these remarks to him so when he has the courage to read them he will understand why the court has reached the conclusion it has.

‘You have preyed upon the vulnerable with superficial charm.

‘You have been convicted by the strong prosecution case. Not only were the bodies of two women found in your home, hidden in a locked freezer purchased for that purpose, they showed signs of violence which you failed to explain.’