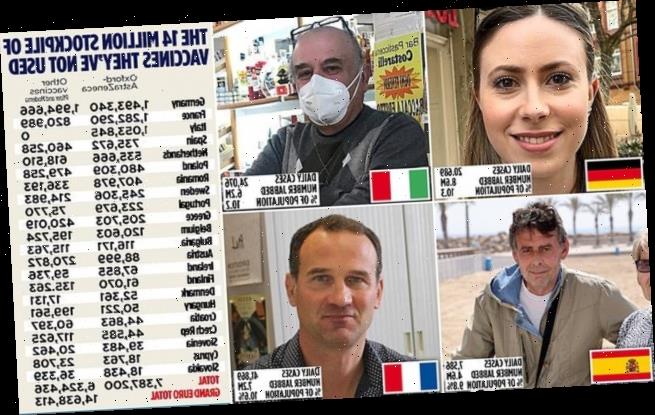 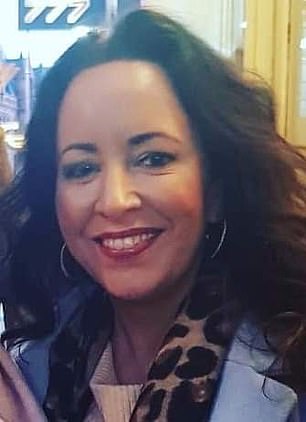 Corrinna Maguire thinks Brussels has let all of Europe down

Five thousand long-term care residents still haven’t had a jab. Despite hopes of getting 827,000 AstraZeneca doses by the end of March, based on advance purchase agreements, Ireland has had only 228,000.

Aaron Daly, 43, a photographer from Dun Laoghaire, said: ‘I blame the government for failing to put in place the necessary logistics for the rollout.

‘Our health service has again shown failings in communication and organisation.’ His wife is a full-time carer to their daughter who has special needs.

Neither has been allocated a vaccination and he says: ‘It could be months before our daughter is vaccinated.

‘I have family in the North, so am very aware how much quicker the rollout has been there.

‘Family carers in Northern Ireland and the UK were prioritised, which makes so much sense.’

Siobhan O’Hara, 51, a part-time carer from Manorhamilton, Co Leitrim, said: ‘I am very disappointed – both with the limited amount of vaccines and the speed of the rollout.

‘Initially, I blame the EU Commission. Like anyone purchasing a product, they should have had complete transparency and official confirmation of quantities and delivery date assurances from AstraZeneca.’ Her mother needs full-time care and has only recently had the jab.

Corrinna Maguire, 43, a general manager from Glenboy Co Leitrim, said: ‘Our government is to blame. It should have organised the purchase of the vaccine better. Also, Brussels seems to have let the whole of Europe down on not securing enough vaccines quick enough.

‘The rollout across the UK and Northern Ireland is excellent. Other countries should follow suit. It’s frustrating living six miles from the border and not being able to get the vaccine.’

For days, our doctor’s surgery has been flooded with desperate calls for the jab

First, President Emmanuel Macron dismissed the AstraZeneca vaccine as ‘quasi-ineffective’ in people over-65. Then opinion polls suggested that up to 60 per cent of French people do not want the vaccine. 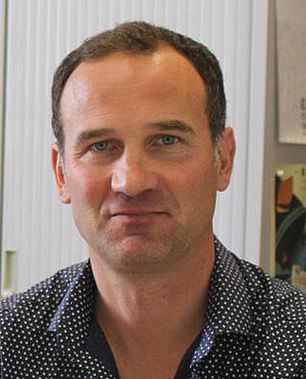 Adding to the problem, the authorities suspended use of the AZ jab over fears of blood clots. Finally, that decision was overturned but health officials ruled that only people aged 55 and over should get the AstraZeneca vaccine.

Francoise Durand, a GP in the Morbihan department in Brittany, says: ‘I have people crying out for vaccines and been flooded with desperate calls. I’ve appealed to the Ministry but there has been insufficient communication.

‘Today, I have ten doses available but there are 100 or more people waiting.There is very little faith in the government. People point the finger at Macron and say he has admitted that he has failed them. It is intolerable in a country like ours which prides itself on the excellence of its health service.’

Retired Breton farmer Franck Lelievre spoke to the MoS while waiting at a surgery for a jab. He said: ‘I’m worried because I have a heart condition and high blood pressure. If I get Covid, it’s probably curtains for me.

‘I’ve been asking for a jab for weeks. There just haven’t been any available. Hopefully this morning I’ll get one.

‘You English seem to be ahead of France. Maybe it’s something to do with Brexit.’

Sylvie, a 49-year-old shop assistant, said: ‘It’s a national scandal. We’ve been living with this evil virus for a year. Finally they’ve developed an antidote but we can’t get it.’

Marc Droguet, deputy mayor of Redon, a town of 11,000 inhabitants, said: ‘Yes, we are behind England but this is not a a rugby match. There are no winners and losers. In the EU, we must work together to solve this crisis together. That’s what Europe is about. Whereas the English see fit to go it alone, we prefer to work together. Together we stand. Divided we fall. 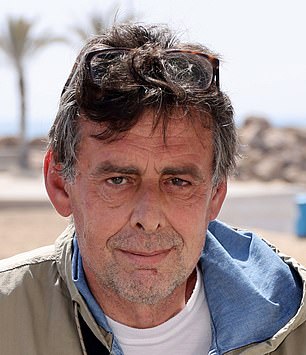 Halted use of AstraZeneca for eight days, resulting in a stockpile of 735,652 doses. Initially, one of 11 EU countries that refused to recommend AZ for the elderly. It’s estimated that only 50 per cent of those aged 80 and over have been vaccinated.

Retired shoe buyer Jesus Blesa, 66, who lives in the Costa Blanca town of Torrevieja has not yet been jabbed.

‘I don’t know when I’ll get mine. It just goes to show you how slow things are here,’ he said.

‘I know things are a lot better in England and I’m envious.

‘Spain is on the verge of a third wave which would be devastating if it means another summer without foreign tourists.’

She said: ‘I’m in a high-risk group and coronavirus could be a death sentence for me but I’ve yet to receive my first jab and I have no idea how long I’ll have to wait. There seems to be very little co-ordination at European level.’

She says she wrote to the Spanish Prime Minister, saying it was a ‘disgrace’ that she is still waiting for a vaccine. She got a reply saying the health ministry was ‘following protocols based on age and occupation. I have a friend in England who says they’re prioritising people according to their needs. That should happen here.’

Refuse collector Jose Francisco Martinez, 46, says: ‘My dad is 79 and my mum 73 and neither have been jabbed. I admire the way Britain is responding.’

Photographer Joaquin Carreon, 61, from Torrevieja, says: “The vaccine problem here is definitely a European problem. You can understand why people in the UK are happy they voted for Brexit.’

Oscar Martinez, 55, who cares full-time for his mum in Miranda de Ebro near Burgos, northern Spain, said: ‘British politicians have been more on the ball.’

With an Anglo-Saxon mindset, Britain is better organised 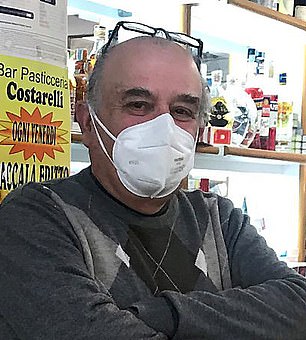 There was widespread anger last week when 29 million doses of the AstraZeneca jab destined for EU nations and poorer countries were found stockpiled in a warehouse near Rome.

Latest figures show that 51 per cent of the over-80s in Italy have not yet been inoculated, nor have 95 per cent of those aged 70-79.

The country also paused rollout of the AZ jab over blood clot fears. The government is now set to order the Russian Sputnik V jab.

Housewife Antonia Piredda, 49, is angry that her 91-year-old mother-in-law has not yet had the jab.

She says: ‘My daughter and sister-in-law, who are young but work at schools, have been vaccinated. The rollout in Italy has been seriously disorganised. The authorities still don’t know what they are doing. The health system here has always been chaotic. They can’t decide who to vaccinate first.

‘If they continue at this pace, we will never get back to normal. The UK has done well, they have executed their vaccine rollout to perfection. It would have been better to keep the vaccines here and not export them to the UK.’

Pizza restaurant owner Massimo Cappellacci says: ‘The vaccination campaign here is very behind and disorganised. It is classic Italy.

‘The main problem is supply. It’s not the fault of the region, it is the EU’s fault, as it was Brussels that organised it.

‘As our prime minister has said, if it is working, then great, otherwise Italy should go it alone.’ Gino Barrozzi, a 60-year-old sales agent, says: ‘My 87-year-old mother is just getting her jab this week.

Giovanni Facile, 72, owner of a coffee bar is still awaiting a jab and says ‘it’s not going to be for a while’. He explains: ‘They are giving them to other groups, such as lawyers, ahead of older people. This is how things work in Italy.’ 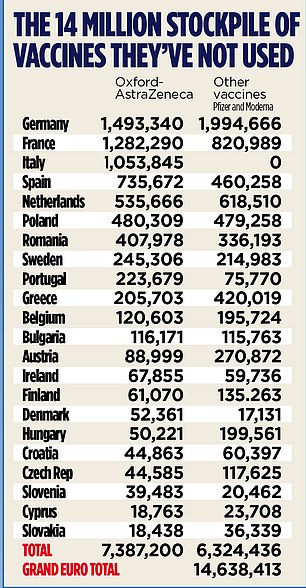 Belgium has 316,327 unused doses despite being home to a Pfizer’s production site in the town of Puurs. Only 10 per cent of Belgians have had a jab.

Jo Verstuyft, a pharmacist in Puurs, says: ‘The Pfizer plant is just here, but I had to have an AstraZeneca vaccination made in the UK.’

Danielle Jacobs, retired, said: ‘It’s so frustrating that Belgium produces so many doses but we don’t have enough for the Belgian people.’

Eric Lemestre, a civil servant, said:‘The bickering about AstraZeneca has been as much petty politics as science.’

Just too much talk– and too few jabs

The government has promised everyone aged over 18 a vaccine this year.

AstraZeneca’s plant in Leiden became the focus of the EU’s vaccine row with Britain after a Brussels source said doses from there ‘have to go to the EU’ despite a contract to supply Britain. The country has vaccinated 8.7 people per 100.

Costis Budolas, a restaurant owner in Leiden, says: ‘The EU is collapsing. You Brits did the right thing to leave.

‘Outside the EU, you can be faster. I used to live in London. I know that trade has been affected by Brexit but I think this won’t last for long and the UK will be happy to have left within a few months.’

Ruud Mestrom, a bar and restaurant owner, said: ‘Whereas Israel’s vaccination programme worked round the clock, here it’s just from 9am to 5pm.’

Cancer sufferer Eveline van Koetsveld van Ankeron, owner of an art supplies shop, says: ‘Why do I have to wait so long for a jab? Maybe at the end of May or June I’ll get one. People who need the vaccine the most, why are they not getting it?’

Bennie, an olive oil store manager, said: ‘There’s too much talk and not enough jabbing going on. There is a lack of leadership.’

Brussels has been caught sleeping 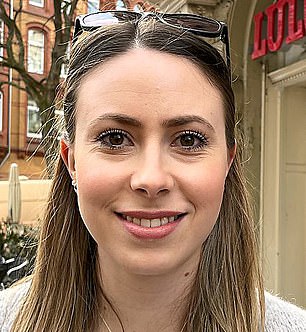 After a temporary halt on using the AstraZeneca jab amid reports of blood-clot disorders in a small number of people, the country has a stockpile of 3.5 million unused doses.

Only 10 per cent of Germans have had their first dose – compared with 42 per cent in Britain. The Berlin government is now considering buying doses of Russia’s Sputnik V.

Jorg Wilkens, 60, a carpenter from Hanover who has heart problems, says: ‘Compared to England, things are going badly here. The EU have been asleep. Every country should have got their own vaccine. I have no idea when I will get my jab.’

Dr Arnulf Sander, 68, a GP whose wife Christiane works in his office, says: ‘England is way ahead of us.

‘Last year we started to build big vaccination centres all over the country but they are more or less empty now because we don’t have enough vaccines.’

Even when Germany’s vaccine campaign is accelerated next month, he says his surgery will only get 20 jabs a week. ‘What we need is less bureaucracy and more flexibility.’

Juliana Becker, 28, a product manager, said: ‘The EU has acted too hesitantly. It seems that Brussels started negotiations with manufacturers far too late.

‘I have friends in England who are looking forward to being vaccinated in the next couple of weeks. I don’t think we will we’ll be getting our jab any time soon.’