A group of Chinese nationals living in Sydney have been caught allegedly taking part in an elaborate US-based online investment scam that used dating and employment sites as well as messaging apps to swindle people across the globe of about $US100 million.

Four men – two aged 19, the others 27 and 24 – were arrested recently over their alleged involvement in the crime, the Australian Federal Police said. 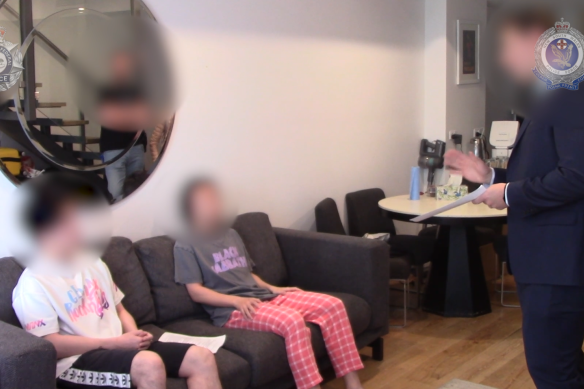 The two 19-year-olds , believed to be students, were arrested after a search warrant was conducted at their home in Pyrmont.Credit:AFP

The older two were arrested at Sydney and Melbourne airports last month as they boarded flights to Hong Kong.

The two 19-year-olds, believed to be students, were arrested after a search warrant was conducted at their home in Pyrmont in October.

They have all since been charged with dealing in the proceeds of crime.

Police will allege the four men were used by the crime syndicate to create an “Australian arm” of the global scheme.

The four men allegedly registered Australian companies with the Australian Securities and Investments Commission (ASIC) to legitimise the appearance of the scam and opened Australian business bank accounts to launder the scam money.

The victims were convinced to put money into both fake and real investment applications, investing in both foreign exchange and cryptocurrency, the federal police said.

The victims were then allegedly made to subscribe to a financial investment service, where data was manipulated to show positive results on their investments, and were encouraged via the service to invest even more.

Most of the victims are based in the US.

The federal police were alerted to the Australian branch of the alleged scam by the US Secret Service in August.

“Investigations into the true scope of the fraud on potential Australian victims are ongoing,” a statement from the federal police said.

AFP cybercrime operations Detective Sergeant Salam Zreika said online scams were becoming increasingly sophisticated in recent years and some victims were losing their life savings due to frauds like these.

“It is essential people exercise the utmost caution if cold-approached online or on the phone by people trying to sell financial or investment services. Criminals are ruthless and will stop at nothing to take your money,” she said.

“Refrain from investing in foreign exchange, cryptocurrency or speculative investments with people you’ve only ever encountered in the online environment. If you are unsure, get a second opinion from a professional, in person.”