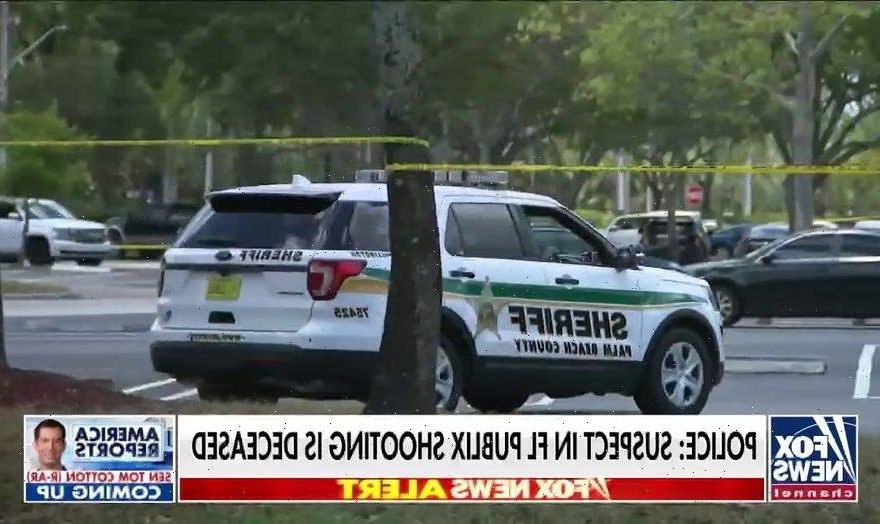 Shooter among the dead in Royal Palm Beach, investigators say

The Florida gunman who fatally shot a 1-year-old boy and the child’s grandmother before turning the weapon on himself had recently been acting “strange” and had previously written on social media that he wanted to “kill people and children,” the Palm Beach County Sheriff said Friday.

Timothy J. Wall, 55, is not believed to have had any encounter with the toddler and his 69-year-old grandmother before he gunned both down inside the Royal Palm Beach Publix store late Thursday morning, Sheriff Ric L. Bradshaw said during an afternoon news conference.

Bradshaw and other sheriff’s office officials described in chilling detail how the two victims entered the store at 11:07 a.m. Eastern Time, grabbed one of the shopping carts outfitted with a car for the child to play with and began shopping.

Surveillance footage from inside the store shows Wall entered at 11:29 a.m. Police said he had arrived in a red scooter.

“He was holding a golf putter. He was using it as a stick, almost like a walking stick,” PBSO Major Michael Massari told reporters.

The victim and her grandson enter the produce section at 11:30 a.m., with the suspect entering the same area at 11:31 a.m., video shows, according to Massari.

“You can see he’s looking towards the victim,” Massari continues. “He approaches her around 11:34, when he pulls out his gun, walks over … behind one aisle to the next where the child was parked in his little shopping cart.”

Wall fires one round at the child, killing him, Massari said.

“Grandma, instinctively, jumps in and is trying to stop him. She struggles with him. His gun jams,” Massari continued. At some point during the struggle, the woman falls to the ground, where Wall shoots her, Massari said.

Wall then shoots himself in the head, killing himself. Police received the first 911 call at 11:35 a.m.

Massari said Wall had been in the same Publix at 9:02 a.m. earlier that day.

After the shooting, investigators interviewed more than 30 people, including witnesses and loved ones. Detectives don’t know of any connection between him and his victims.

Sheriff Bradshaw, speaking to reporters via video call, said his investigators learned that Wall had been acting suspicious and had made questionable statements on his Facebook page.

“The real sad part of this, other than the fact that two people are dead, is that there was a chance this could be stopped. You know why? The reason is, he’s on Facebook. He has said: ‘I want to kill people and children,’” Bradshaw said. “He’s got friends. Obviously they saw that.”

Bradshaw also said Wall’s ex-wife described to police how he had been “acting strange,” and was paranoid and thought he was being followed.

“You think a damn soul told us about that? No,” Bradshaw said. He later added: “If it sounds like I’m angry, I am. Because if somebody would have … called us on the phone and said, ‘Hey, this may not be anything, but it may be something. Because this person is talking about bad things and he’s acting strange.”

The sheriff further described how Thursday’s tragedy “fits the profile across the United States.”

First, he said, was that “somebody knew about it, that bad things were going to happen.” A second factor, was that “obviously there’s some mental unstableness involved in this.”

Bradshaw said investigators were still working to determine whether Wall had obtained the gun legally.

Wall had declared bankruptcy earlier this year after falling deeply into debt.

Meanwhile, he had accumulated more than $215,000 in debts, most of it owed on the home his ex-wife now owns, the bankruptcy file shows. She divorced him in 2018 and he had signed over their house to her in 2019, Palm Beach County court records show.

State records show that the couple once owned a dry cleaning business in the Publix shopping center. It is unclear when it closed, but Wall last filed an annual report with the state in 2012.

No previous criminal record for Wall could be found.