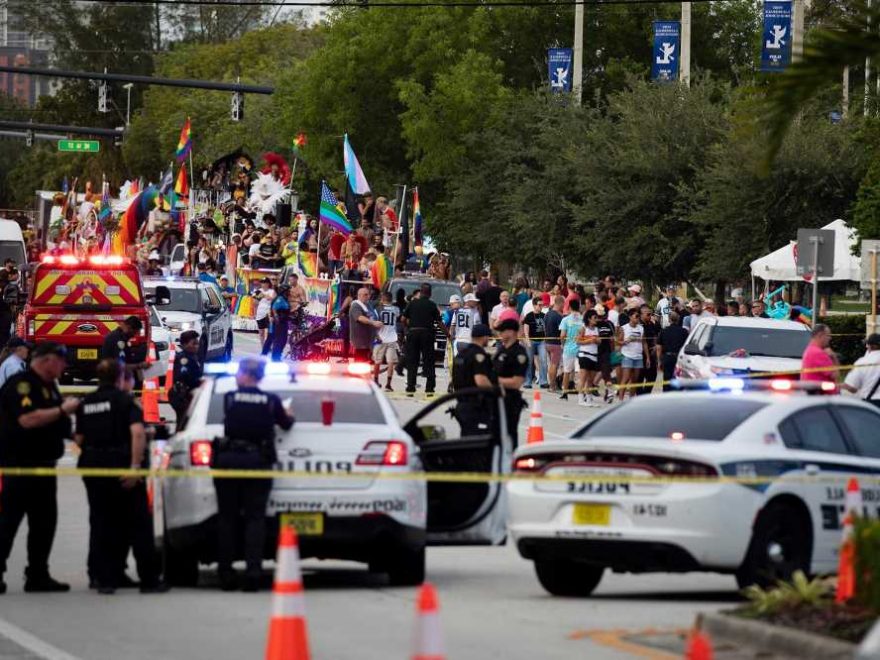 10 killed, including 9 kids, in car crash during tropical storm

The car crash at a Florida Pride Parade that killed one marcher and injured another on Saturday night appears to have been accidental, authorities and organizers said.

The 77-year-old man whose 2011 Dodge Ram plowed into two people at the start of the Wilton Manors Stonewall Pride Parade was participating in the march but had ailments preventing him from walking, the Fort Lauderdale Police Department said in a statement on Sunday.

The driver and two male victims were all members of the Fort Lauderdale Gay Men’s Chorus, the department said.

“As the vehicle began to move forward in anticipation for the start of the parade, the vehicle accelerated unexpectedly, striking two pedestrians,” the statement said.

“After striking the pedestrians, the driver continued across all lanes of traffic, ultimately crashing into the fence of a business on the west side of the street.”

Gary Blocker, chief of the Wilton Manors Police Department, added in a statement that his department worked with the FBI and Fort Lauderdale cops to determine whether the crash was accidental or intentional.

“Today we know yesterday’s incident was a tragic accident, and not a criminal act directed at anyone, or any group of individuals,” Blocker said.

The driver “showed no signs of impairment” from alcohol and cooperated with the investigation, cops said.

The Dodge Ram had been stopped in a staging area of Northeast Fourth Avenue when the vehicle accelerated, according to the statement.

The second victim had serious injuries but was expected to survive. He was still hospitalized at Broward Health Medical Center on Sunday, police said.

The chorus, on its Facebook page, said the group “mourns together” and thanked the community for its love and understanding. The chorus has about 25 members who are mostly older men.

“We are deeply saddened by the tragic death and injuries that occurred as a result of an unfortunate accident at the start of the Stonewall Pride Parade,” the Facebook post said.

The announcements came after some speculation that the driver hit the marchers intentionally, with Fort Lauderdale Mayor Dean Trantalis – who witnessed the crash — calling it “a terrorist attack” on the LGBTQ community.

The car came close to striking a vehicle that had Democratic Rep. Debbie Wasserman Schultz as a passenger.

“It was deliberate, it was premeditated, and it was targeted against a specific person,” Trantalis told Local 10 on Saturday. “Luckily they missed that person, but unfortunately, they hit two other people.”

The mayor said in Twitter post on Sunday he “felt it could be intentional” based on what he saw.

“Law enforcement took what appeared obvious to me and others nearby and investigated further – as is their job,” Trantalis said.

“As the facts continue to be pieced together, a picture is emerging of an accident in which a truck careened out of control.”

Fort Lauderdale cops said they are still looking into the incident.

“While no arrests have been made, the Fort Lauderdale Police Department continues to investigate this incident and will not be releasing the names of the involved parties due to the status of the investigation,” the department said in its statement.