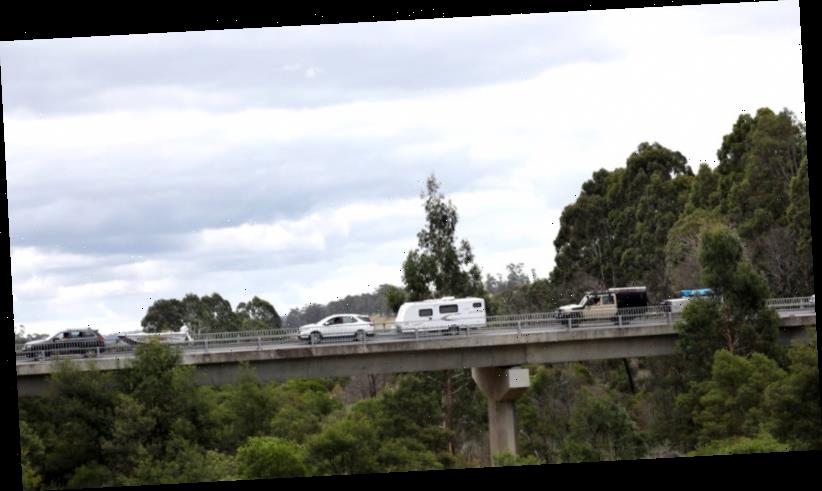 Spending New Year's Eve stuck in a queue on a remote mountainous highway was actually a very fitting end to 2020.

Our car boot held summer holiday supplies and the drinks and nibbles we had purchased at 3pm on Thursday, just before friends and family started texting to ask if we'd seen the news about the border. 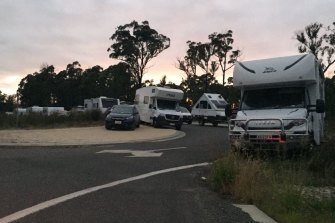 Hundreds pull over to rest near Cann River after spending hours trying to cross the NSW-Victorian border.Credit:Lucy Battersby

We knew we had to avoid Sydney, but were hundreds of kilometres south of that city and its single-digit COVID-19 cases. We had stayed in the "green zone". It took three hours to realise we had to leave straight away or risk a fortnight in strict home lockdown.

The press release provided by the local coastal tourism authority and Victoria's Department of Health and Human Services was vague, but, eventually, news reports and Twitter clarified the urgency (we found out the next day that we could have, in fact, continued to Canberra to visit family as planned and returned to Victoria in coming weeks).

We left Merimbula at 9.45pm. By 10.30pm we had reached the tail end of a long traffic jam just outside Kiah, NSW. We didn't yet know it stretched all the way to Genoa on the other side of the Victorian border, a 50-kilometre trip that normally takes 36 minutes.

For the next five hours we inched along and started turning off the engine during long periods when the queue stalled.

Travellers in the convoy sat and waited in the dark and quiet of a burnt national park, sometimes listening to frogs and crickets. Then engines would restart and the snake of red tail lights would slither forward a little.

During long pauses people walked their dogs along the highway shoulder, did a bush wee or just went for a wander to stay awake.

At midnight a very feeble celebration of car horns and shouting spontaneously erupted to mark the end of 2020.

We had moved about five kilometres in two hours at this stage. We continued to travel at about 3km/h until 3am, not in a continuous crawl, but slow bursts followed by a long stop.

At no point did we see police, driver assistance or health officials. Just thousands of cars and tired travellers stopped in the dark. At 4am we finally passed Genoa, where we were waved through without anyone checking our border permit.

Once clear we looked for somewhere to stop and rest for a few hours, but, in a packed car with small kids, we were uncomfortable and at 5am decided to keep moving.

Dawn revealed hundreds of caravans and cars parked at every rest area or large flat patch for the next 50 kilometres, as drivers tried to get enough rest to continue safely.

We have complied with a lot of government instructions this year and were keeping a close eye on travel restrictions. The angriest we felt during our 15-hour ordeal (we still haven't reached home) was when Jerome Weimar gas-lighted travellers, saying we were told over ten days ago the border might close with nine-hour's notice.

Now it’s time to wait in line for a COVID test (no extra testing has been set up even though thousands will be seeking them today), then rest at home and maybe, possibly, see if we can salvage the 2021 summer holidays.