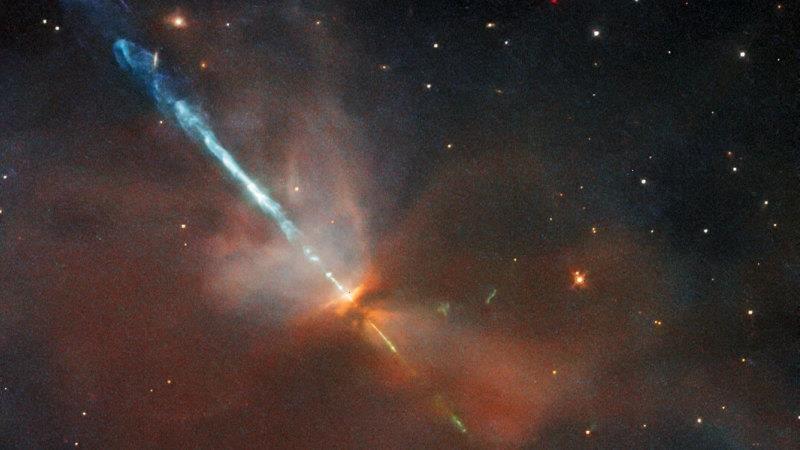 In 2018, the community on the Torres Strait island of Mer celebrated the arrival of a new telescope for Tagai State College. The students, eager to learn, brought their families, which included several Elders. Each night, I hosted a different year group so the kids would have an opportunity to share their curiosity about the stars with their families, who inspired their love of the cosmos. The experience for both parties was exciting, but for different reasons.

Most astrophysicists spend their time looking at computer screens when conducting observations with professional telescopes. You would think that astrophysicists would be accustomed to seeing beautifully dark skies, but this is often not the case. However, it is normal for people on Mer. One Elder explained the importance of a concept called purut, a time for family to sleep on the beach under the clear skies where they tell star stories. 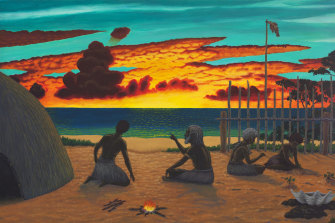 Our Culture is Important by Meriam Elder and artist Segar Passi (2012). It shows knowledge of the sky being taught to  younger generations.Credit:Courtesy of Segar Passi and Gab Titui

On the remote island, the view of the stars is breathtaking. The clear skies over Mer allow telescope users to see much fainter objects than city dwellers. Unfortunately, most communities do not have telescopes, and most Elders have never looked through one. A trio of children gathered around the telescope, which was focused on Saturn. After a few excited minutes, one child pulled his grandmother over. “Holy shit, look at that!” she exclaimed. This was the first time in her 60-odd years she had seen the rings of Saturn.

The kids turned to me and pointed to the west. “Do you know what that star is?” they asked. I nodded and asked if they knew. “That’s Iluel, the Evening Star. I think you call it Venus. In the morning we call it Gerger Neseur,” one boy pointed and said. The children on Mer know the stars. They know the Meriam (Indigenous) names and most know the Western names, and they know what they mean. It is a perfect illustration of living knowledge. 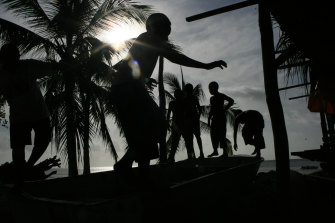 Elders explain that Iluel and Gerger Neseur are the same object, as you will never see them in the morning and the evening on the same day. Iluel relates to a moon story from the island of Erub, north of Mer, that tells of a young Meuram man and Saisarem woman. They are two of the four main clan groups on Erub, with Meuram being in the north-east of the island and Saisarem being in the north-west. This story was shared by Erub Elder Kapua Gutchen snr and is featured in the work of Meuram artist Daniel O’Shane.

Iluel is a beautiful woman whose lover is Meb, the mischievous moon-man. Their relationship is disrupted by constant atkit (jealousy); Meb is jealous of Iluel’s relationship with Lim (the sun), and Iluel is suspicious of Meb’s relationship with her sisters. Meb attempts to take Iluel back to his homeland, but their jealousy is too much.

The lovers join each other once a month when Iluel appears near Meb in the evening sky. Meb is always in a crescent phase and is visible in the north-western skies, over Iluel’s clan area on Erub. As days pass, they drift away from one another. Meb waxes until he appears in full form in the east at dusk, over his home Country. To this day, Erub Islanders refer to the waxing crescent moon as Atkit Meb, “jealous moon”.

The story explains the relative motions of the sun, moon and Venus. Venus is always seen near the sun as the planet’s orbit is closer to the sun than Earth, explaining Meb’s jealousy of Iluel’s relationship with Lim. They are only visible together when Venus is near the sun, and they come so close it almost looks as though they embrace. But Iluel becomes jealous of Meb and his relationship with her sisters – Mercury, Mars, Jupiter and Saturn – as they sometimes brush past or move behind Meb. This tradition explains the movements of these celestial bodies around the solar system as we see them. It is also reminiscent of ancient Babylonian traditions of Ishtar (Venus), a fickle goddess who flirted with Shamash, the sun god. She constantly moves around and brushes up against Shamash as she pursues him across the sky and through the underworld.

Venus is arguably the most prominently featured and commonly described planet in Indigenous traditions, being the third-brightest object in the sky after the sun and moon. The planet’s movements, its changing brightness and its position on the horizon as it moves back and forth from a Morning Star to an Evening Star all have special significance. This is built on millennia of careful observation, but also on the Indigenous mathematical frameworks that are used to work out its complex but predictable cycles. Traditional knowledge of the planets is diverse and complex, but still poorly understood outside those communities. 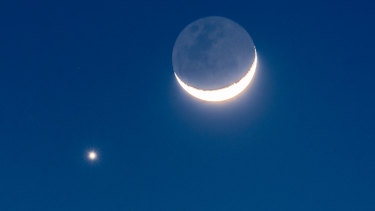 Venus and the crescent Moon in conjunction, with the glow of earthshine visible on the moon. Credit:(Peter Lieverdink)

Occasionally, planets can come close together as they journey across the cosmos on the celestial road, like two friends briefly meeting for a walk. When this happens, astronomers call it a conjunction. There are many interesting ways this is conceptualised by cultures across the world. In western Greenland, Inuit Elders describe planetary conjunctions as celestial women who visit each other. Ancient cultures saw conjunctions as omens of war, famine and general disaster. Others saw it as a positive sign. Some scholars suggest the Magi (wise men) following the Star of Bethlehem were guided by the conjunction of Venus and Jupiter when the planets were just one-tenth of a degree apart.

The children on Mer know the stars … It is a perfect illustration of living knowledge.

In December 2020, a rare and extremely close conjunction of Jupiter and Saturn was visible in the evening sky. The planetary duo reached their closest approach of just one-tenth of a degree on December 21 — the day of the summer solstice. For an astronomer, it was a double whammy of cosmic excitement. The last time these two planets appeared this close together in the sky was in 1623, around the time Galileo was describing the aurora. 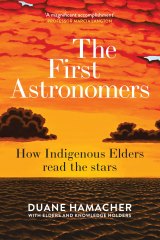 The First Astronomers: How Indigenous Elders read the stars by Duane Hamacher.Credit:Allen & Unwin

In the lead-up, Jupiter and Saturn drew closer together each night. Commentators around the world noted that they seemed like eyes in the sky. Coincidentally, some First Peoples held a similar view. Euahlayi people of northern NSW describe the conjunction of Venus and Mars as the eyes of Buwadjarr, the supreme creation ancestor known as the All-Father. This cosmic event has special significance and is linked to ceremony.

A few years back, Dr Robert Fuller worked with Uncle Ghillar Michael Anderson and other Elders to document Kamilaroi and Euahlayi star knowledge. An Elder (who wishes to remain anonymous) explained the relationship between the two planets, how their colours are represented on the land, and how their conjunction is related to the eyes of the All-Father: “During the day, the eyes of Maliyan [the eaglehawk] are the eyes of Buwadjarr. During the night, Maliyan’s eyes are Venus and Mars, which become the eyes of Buwadjarr. One is red [Mars], and one is blue and green [Venus].”

Two stones are brought together during a special ceremony held near Quilpie, 600 kilometres to the north-west near Goodooga in western Queensland. The Euahlayi bring a green and blue opal, representing Venus, when they meet the local Maranganji people, who bring a red stone signifying Mars. The travel route to this ceremonial site is part of a songline.

This is an edited extract from The First Astronomers: How Indigenous Elders read the stars by Associate Professor of Cultural Astronomy at the University of Melbourne Duane Hamacher with Elders and Knowledge Holders Ghillar Michael Anderson, John Barsa, David Bosun, Ron Day, Segar Passi and Alo Tapim. Published by Allen & Unwin, it is out now.