Fifteen free-roaming horses were brutally shot and killed in a wooded area in what is being called a "cruel and inhumane crime."

Megan Goble started finding the dead horses – some just babies and others pregnant – in a deserted strip mining location on Monday. 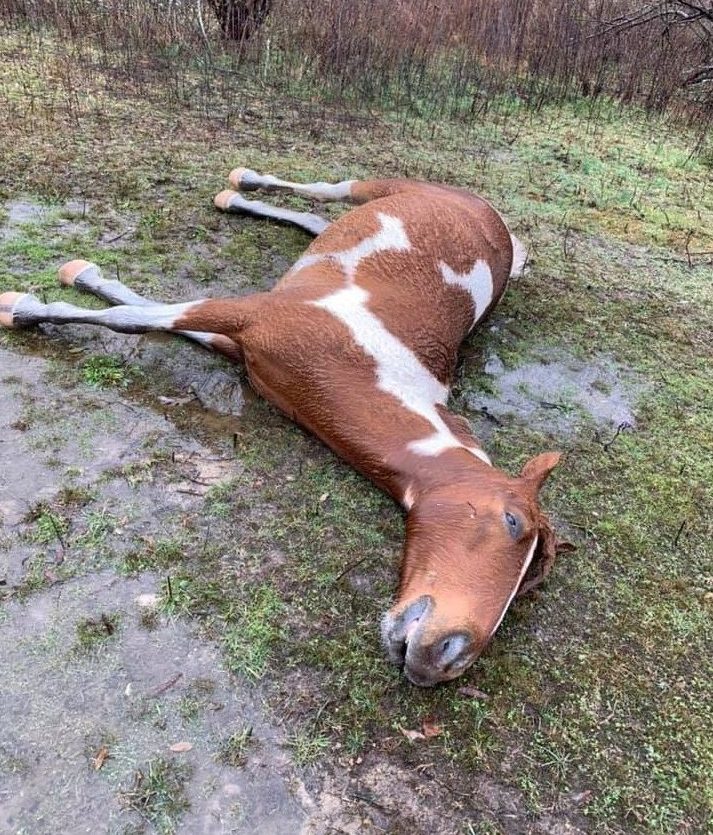 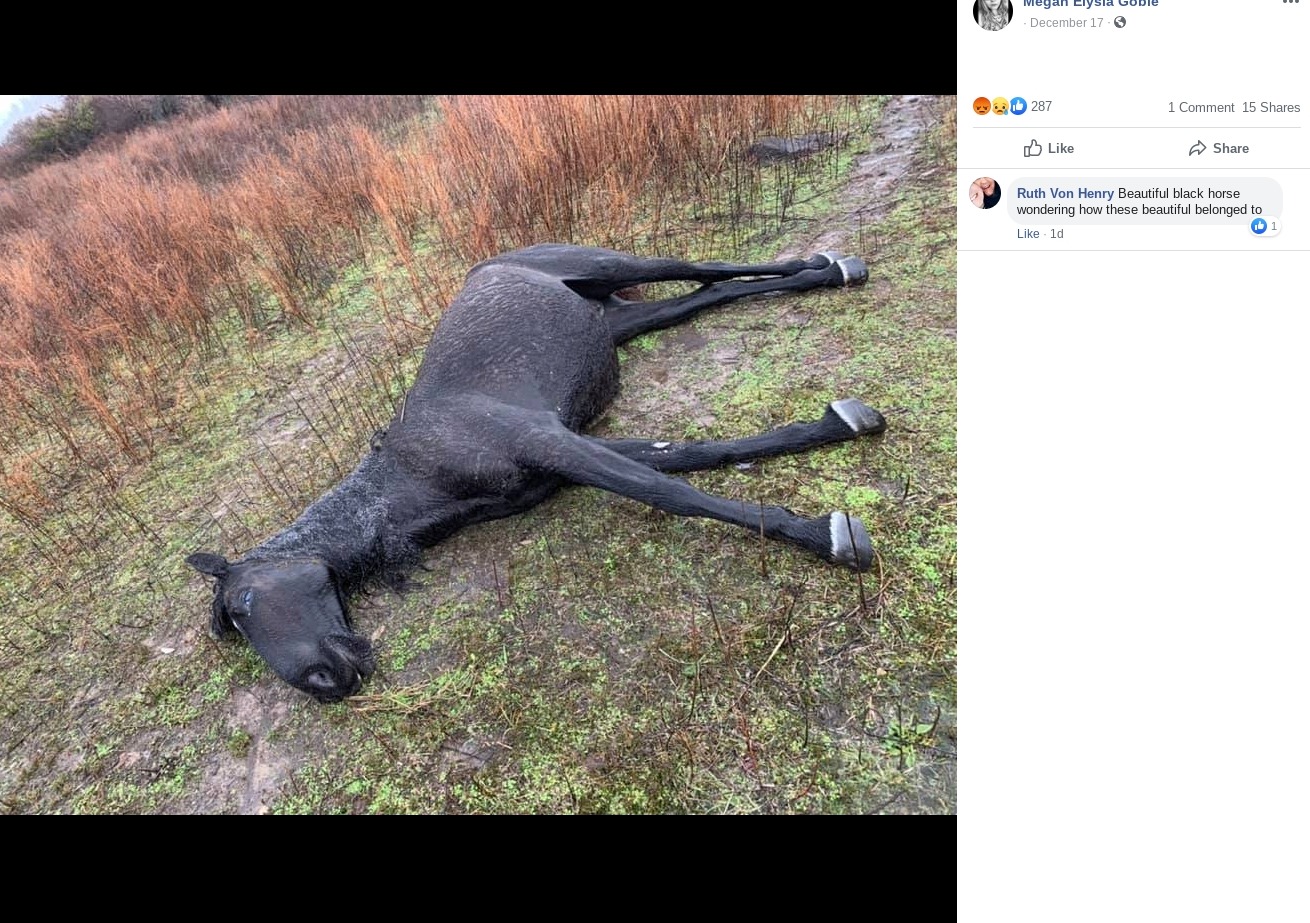 The animal lover, who works in animal rescue and owns a pet grooming company in the area where the horses were killed, spoke out to Facebook about how she's been spending her time counting and searching for dead horses.

"Some sorry piece of human garbage hunted them down, shot them and left them to die. A handful of them were just babies, a year or so old. One of which was shot in the face while grazing. At least two were pregnant and had evidence of miscarriage after death.

"I’m mad, I’m hurt and I’m disgusted, knowing that whoever the sick f*** is that did this is walking free, out among us, in this community. "

The brutal killings took place in Floyd County of Eastern Kentucky, US – where a portion of the land is owned by Megan's family. 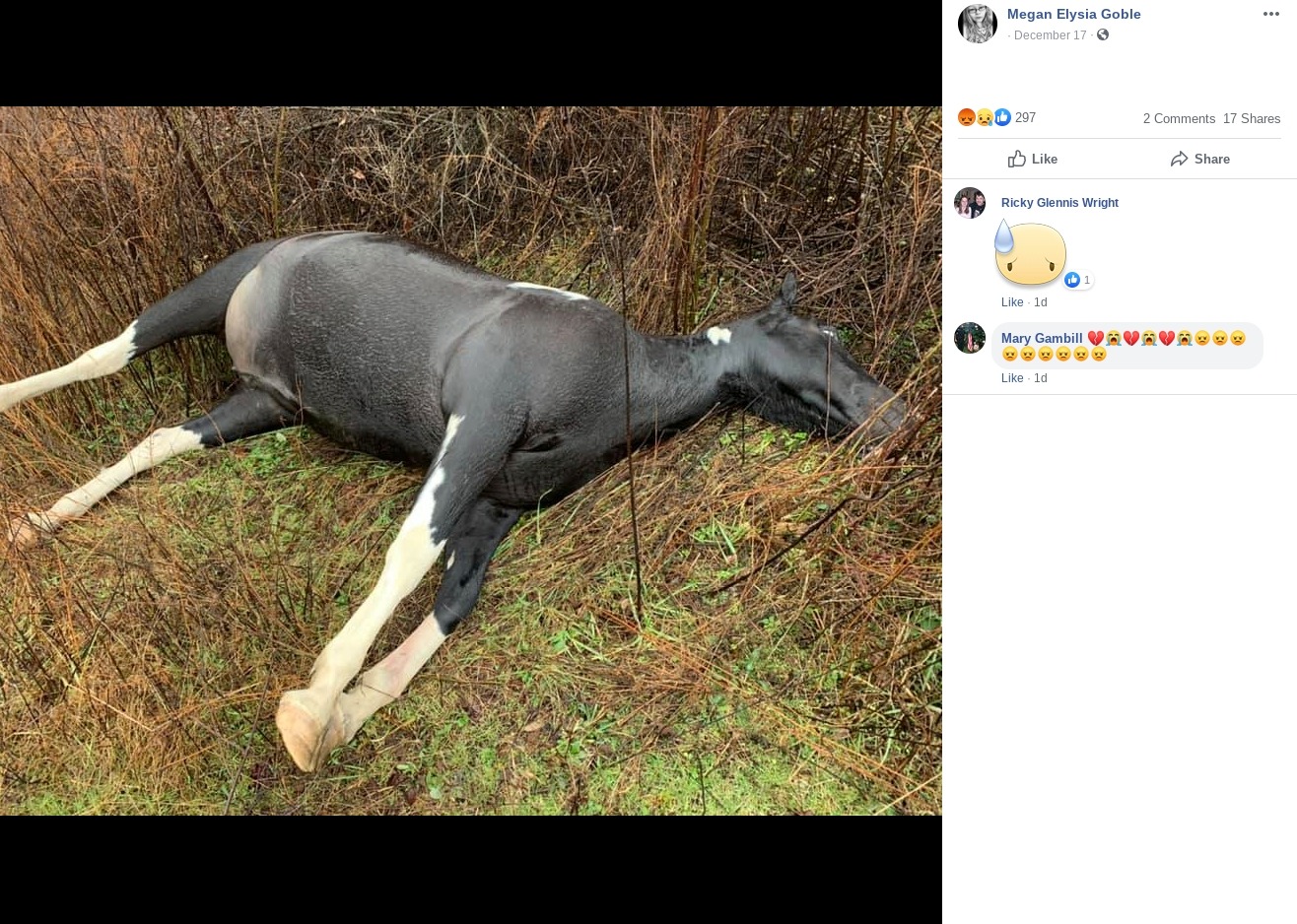 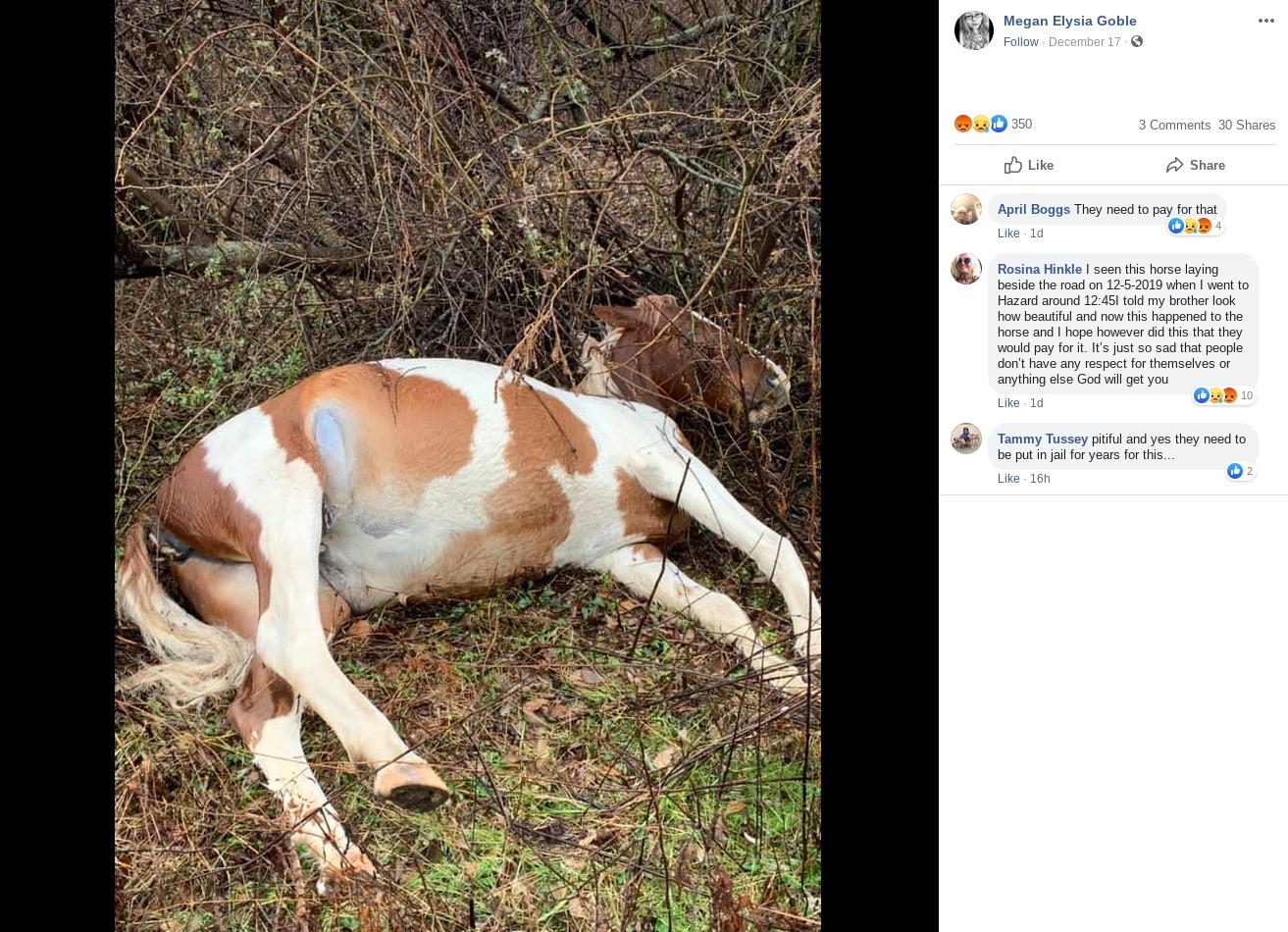 Floyd County Sheriff John Hunt told local TV station WYMT: "This is very inhumane and it's a very cruel act of somebody who just apparently had nothing else to do or whatever just to go back on a strip job and shoot down horses who were, one of them obviously was feeding, had grass in its mouth.

"It looked like a battlefield for just horses, we counted 15 that we found dead."

Megan, who's been doing rescue work for a significant amount of time, also spoke with the news station.

She told them: "This was a very large act of evil, for lack of a better term. I mean, there's no other way that I can describe it.

"Somebody went out of their way to go up there and kill these horses, and not even quickly, for no reason."

She wrote to Facebook: "The more people who see it the better. Someone has to know something and the more this circulates, the harder it will be for this monster to hide."

Information on who is accountable for the horrific scene of hunted horses will be rewarded with more than $2,000.

Stephanie Bell, Senior Director of Cruelty Case Work with PETA, told the SunOnline: "We haven't contributed to the award but many people are stepping up to donate.

"We are certainly poised to push for a vigorous prosecution and maximum sentencing under Kentucky's Cruelty Animal Statue."

The felony conviction can result in prison time.

Stephanie explained: "People who abuse animals rarely do so only once and they almost never stop there.

"The link between crimes against animals and interpersonal violence is undeniable." 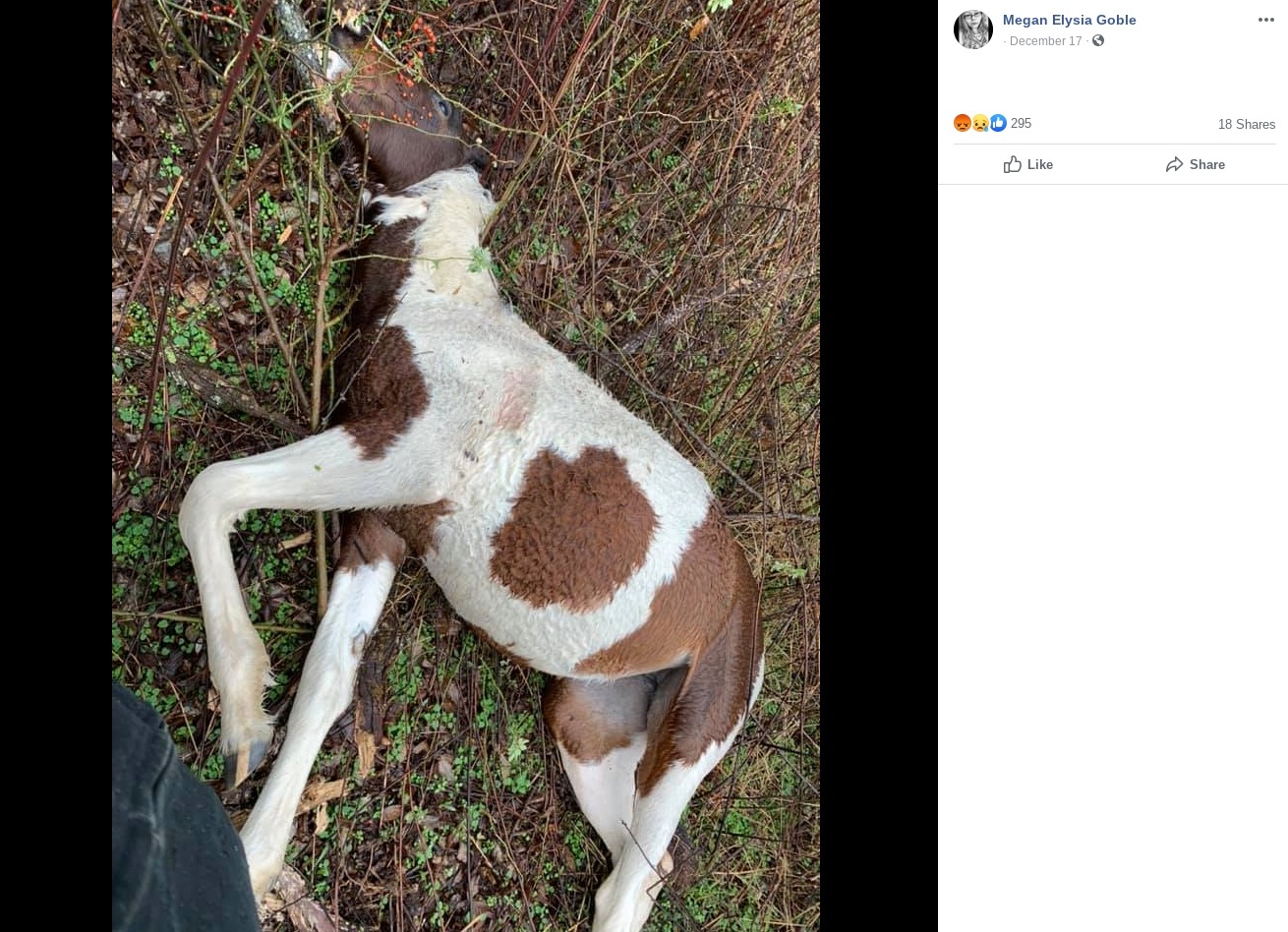 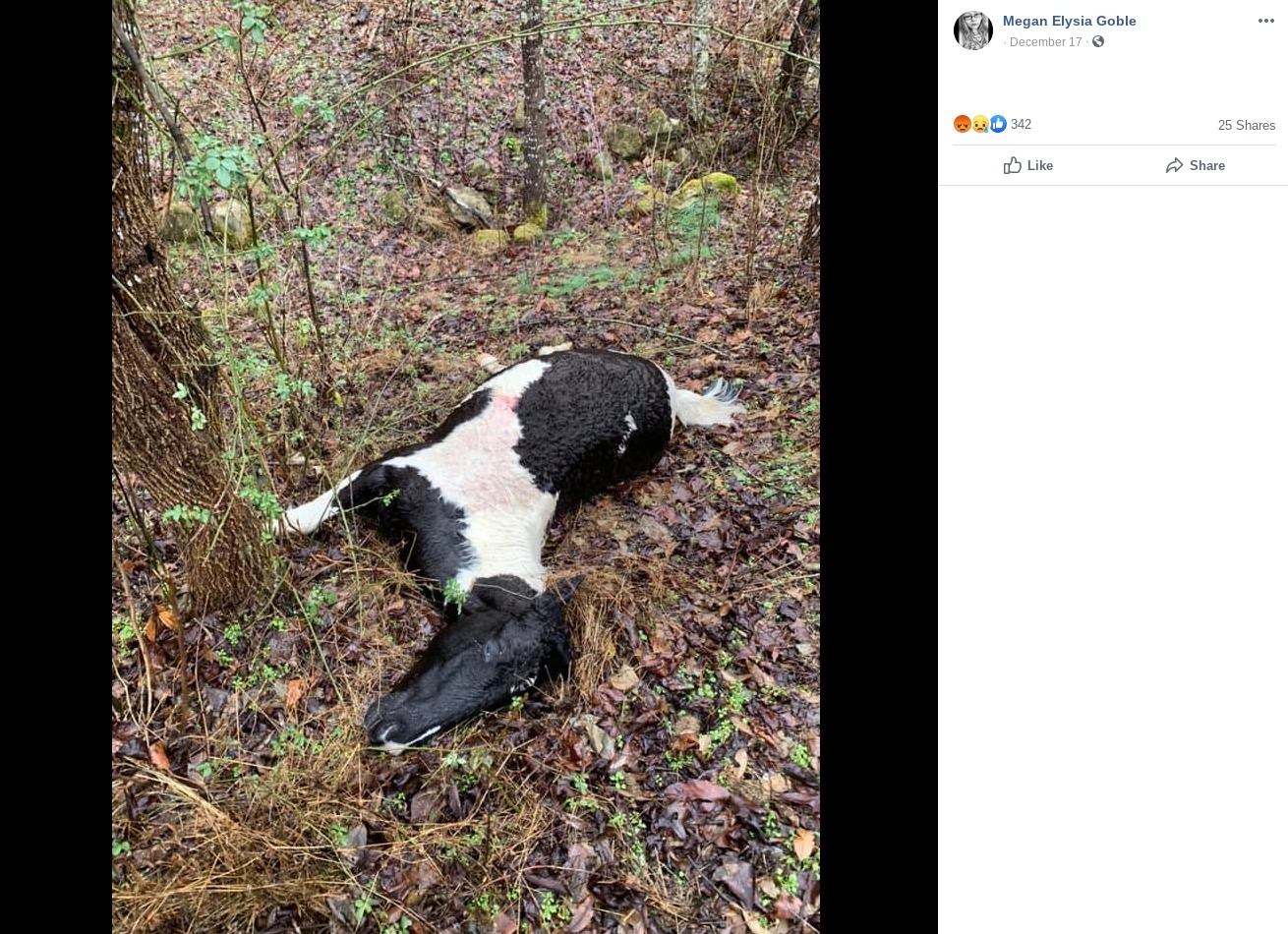