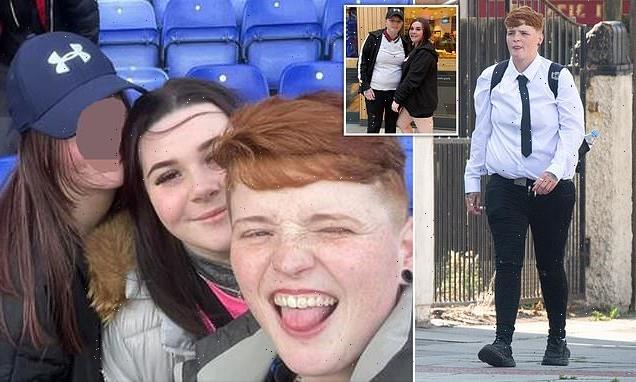 Tranmere Rovers fan, 23, could be one of the first women banned from all football grounds after she hurled a flare towards referee as her team were losing 3-0

A Tranmere Rovers fan could be one of the first women banned from all football stadiums in Britain after she was caught hurling a flare onto the pitch following her side’s dismal performance.

Abbie-Leigh Reay, 23, was arrested after she picked up the object and threw it towards the referee when her team went 3-0 down in a crunch League Two fixture against Forest Green Rovers on January 29.

CCTV footage also captured the moment that Reay, from Bebington, Merseyside, can be seen throwing her arms up in celebration as the flare lands on the pitch near to referee Lee Swabey and Forest Green goalkeeper Luke McGee.

Reay, an Aldi supermarket worker, was stopped by police as she was leaving Tranmere’s Prenton Park after the League Two side were thrashed 4-0.

Despite her arrest, Reay posted a selfie from the game on social media, writing Before it all went down hill’ as the caption.

Appearing at Sefton Magistrates’ Court in Merseyside on Thursday, Reay denied a charge of throwing a missile onto a football playing area under the Football (Offences) Act 1991 but she was convicted after a trial.

She is due to be sentenced later this month. 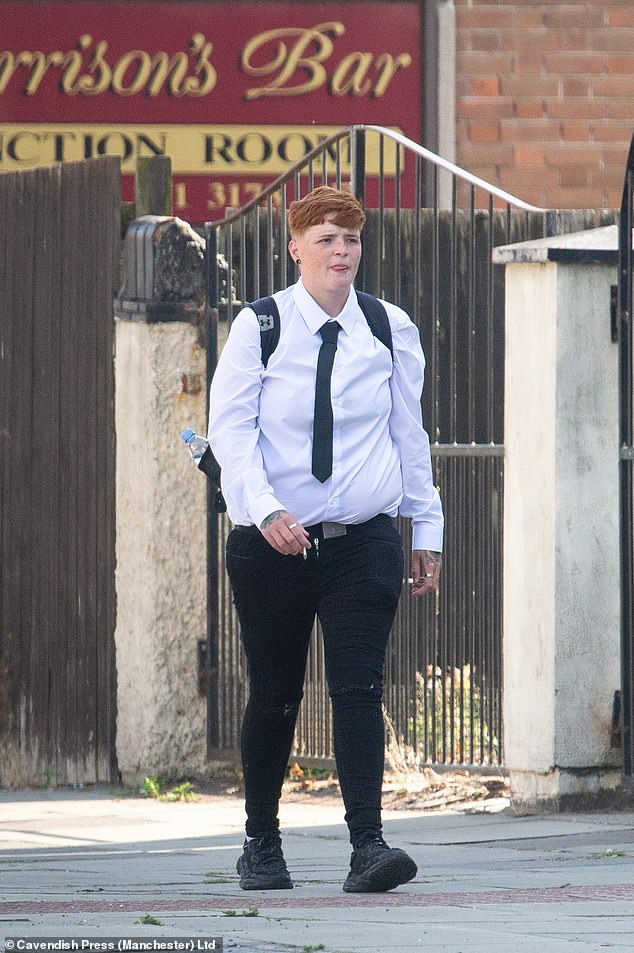 Abbie-Leigh Reay, 23, Reay, of Bebington, near Birkenhead, was arrested after she picked up a flare and threw it towards the referee while watching Tranmere Rovers at Prenton Park 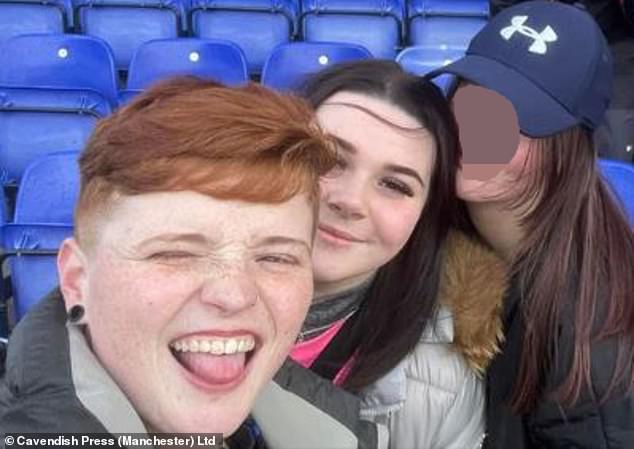 Reay jokingly posted a photo of herself (left), and her partner Libby Case (middle) on Facebook after the match, with the caption: ‘Before it all went down hill’.

She now faces a Football Banning Order which could see her banned from any ground in Britain – making her one of the first woman in Britain to be outlawed.

The first woman to be banned from football stadiums across England and Wales was Middlesbrough fan Julie Phillips, 51, who received a three-year banning order for ripping up pages of the Koran on an away day at Birmingham City in December, 2014.

Reay’s actions took place just after half-time when Forest Green extended their lead as furious fans vented their frustration by hurling missiles onto the pitch near opposition keeper McGee at the Kop end.

Stewards converged on the crowd as they tried to apprehend the missile thrower but Reay could be seen bending down and throwing the flare onto the pitch.

She was interviewed later at her home having been stopped by police on her way out. 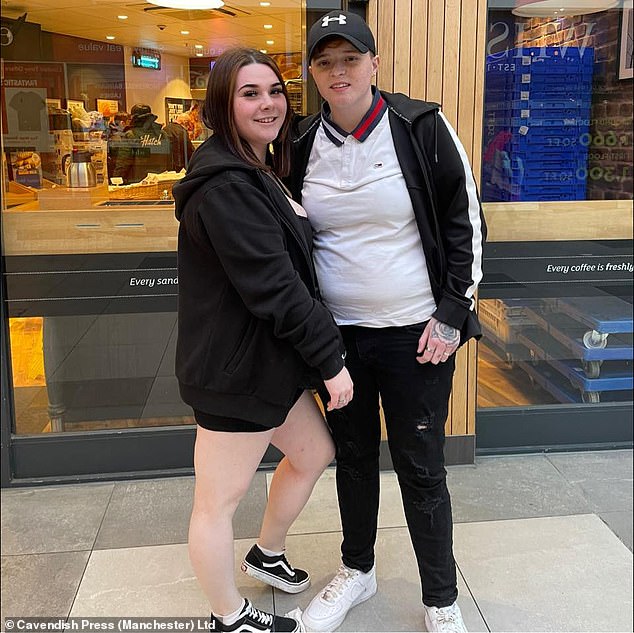 Ms Case (left), an asthma sufferer, said that she did not want to inhale the smoke which is why her partner Reay (right) threw it away 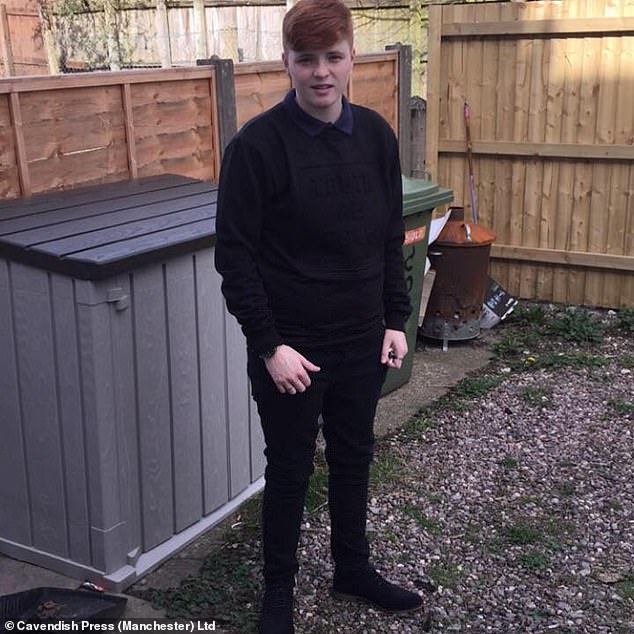 The 23-year-old claimed that the flare had been brought by some ‘lads’ behind her and threw it away in a ‘panic’ to protect her partner Libby Case and brother Joel. She was adamant that she was not celebrating when threw her arms in the air.

Representing herself, she said: ‘We had moved a couple of seats in front of these lads but they rocked down and that’s when the flare has come and it was smoking at my feet,.

‘Joel was on one side and my partner was on the other side and the first thing I thought was to get it away. I threw it directly onto the football pitch. I then turned around and told the lads to ‘F*** off.’ 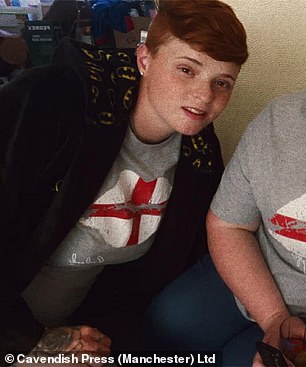 ‘I’ve been going to Tranmere all my life and I hate things like this. I literally had nowhere else to put it. It happened so quickly and the next thing I knew I was getting arrested.’

Meanwhile, Ms Case, an asthma sufferer, told the hearing: ‘The lads told us that they had flares in their pockets. After half-time the flare ended up on my feet.

‘I am asthmatic, I did not want to be inhaling the smoke, so I just panicked. Abbie panicked and just picked it up and threw it and the police turned up.’

‘The lads behind did say it was not her flare.’

A PC patrolling Prenton Park said in a statement: ‘She did admit throwing the flare. She said she felt it hit her and landed on the floor and then in a kind of panic she has thrown it away.

‘She mentioned that she was just scared and that it was burning near her so she picked it up. She didn’t know what to do and her first thought was to throw it away on the pitch.’