Female biker, 29, died in A388 horror crash when she lost control while struggling to put high-heeled diamante boot on pedal, inquest hears

A 29-year-old woman was killed in a motorbike crash after she become distracted by being unable to place her high-heeled diamante boot on the pedal, an inquest heard.

Monika Kunda lost control of her Yamaha bike when she looked down as she struggled to return her left foot to the pedal.

The machine skidded out of control at 40mph throwing the bank worker across the carriageway.

Ms Kunda, who was born in Poland, died from multiple injuries in the crash on the A338 in Bournemouth, Dorset, on August 14 last year. 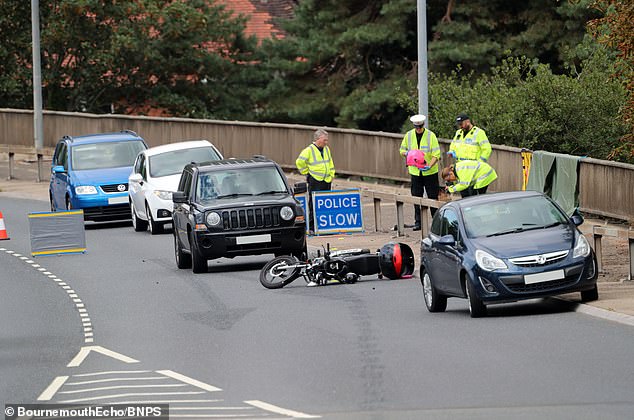 Monika Kunda, 29, lost control of her Yamaha bike when she looked down as she struggled to return her left foot to the pedal. Pictured, police officers examine the bike in August last year

The Dorset coroner has now issued warnings to bikers that they should wear appropriate clothing while riding a motorcycle.

The hearing heard Ms Kunda was wearing a black leather jacket, which appeared to be a ‘fashion item’, black boots decorated with diamanté with a ‘two-to-three inch chunky heel’ and a ‘bright pink’ crash helmet at the time of the accident.

Motorist Jemma Gibbons was driving behind the motorbike and said she saw Ms Kunda stretch her left leg away from the bike ‘as if stretching out cramp’.

She then tried to place her boot on the peg again which was when she momentarily lost concentration.

Miss Gibbons said: ‘Her foot wasn’t on the peg. Her helmet was different, as if she was looking down.

‘She was having trouble getting her foot back on the peg. She struggled for around two seconds.’

She said Ms Kunda was in the centre of the carriageway when the bike slid from underneath her. 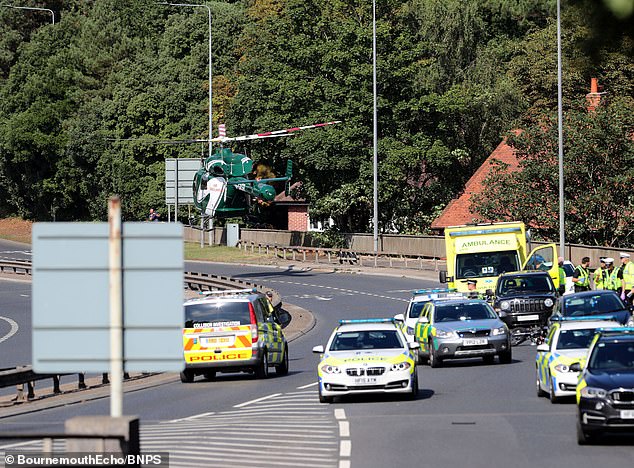 The machine skidded out of control at 40mph throwing Ms Kunda across the carriageway. Pictured: emergency services attend the crash

She slid along the road surface towards the crash barrier.

Miss Gibbons said: ‘This tragic incident will remain with me for the rest of my life.’

Sergeant Mark Scammell, of Dorset traffic police, said the motorbike had no mechanical defect which might explain the crash.

He said: ‘There would appear to be some degree of distraction immediately prior to the bike falling to the ground.’

Coroner Brendan Allen recorded a verdict that Ms Kunda, from Bournemouth, died as the result of a road traffic collision.

He said: ‘She was, for some reason, distracted by her footwear. She was wearing boots with a high heel.’

He added: ‘It is with the utmost importance that bikers wear appropriate clothing, no matter how short the journey and no matter how familiar the person is with it.’