Washington: The House Oversight and Reform Committee on Thursday, local time, asked the FBI to investigate the role Parler, a social media website and app popular with the American far right, played a role in the violence at the US Capitol.

Representative Carolyn Maloney, who chairs the panel, cited press reports that detailed violent threats on Parler against state elected officials for their role in certifying the election results before the January 6 attack that left five dead. She also noted numerous Parler users have been arrested and charged with threatening violence against elected officials or for their role in participating in the attack. 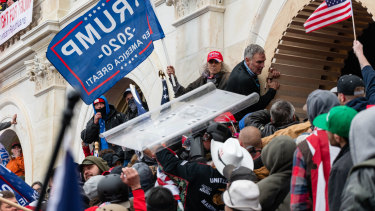 The assault on the Capitol on January 6.Credit:Bloomberg

Reuters reported this week that Parler partially resumed online operations with the help of a Russian-owned technology company after being shut down by Amazon Web Services, which said it had failed to moderate violent content effectively.

The FBI and Parler did not immediately respond to requests for comment.

Maloney asked the FBI to review Parler's role "as a potential facilitator of planning and incitement related to the violence, as a repository of key evidence posted by users on its site, and as a potential conduit for foreign governments who may be financing civil unrest in the United States."

Maloney asked the FBI to review Parler’s financing and its ties to Russia after she noted the company had re-emerged. 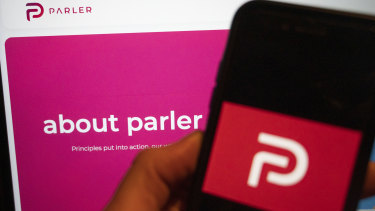 The logo of the social media platform Parler.Credit:AP

Maloney cited Justice Department charges against a Texas man who used a Parler account to post threats regarding the riots that he would return to the Capitol on Jan. 19 "carrying weapons and massing in numbers so large that no army could match them."

The Justice Department said the threats were viewed by other social media users tens of thousands of times.

More than 25,000 National Guard troops and new fencing ringed with razor wire were among the unprecedented security steps put in place ahead of Wednesday's inauguration of President Joe Biden.