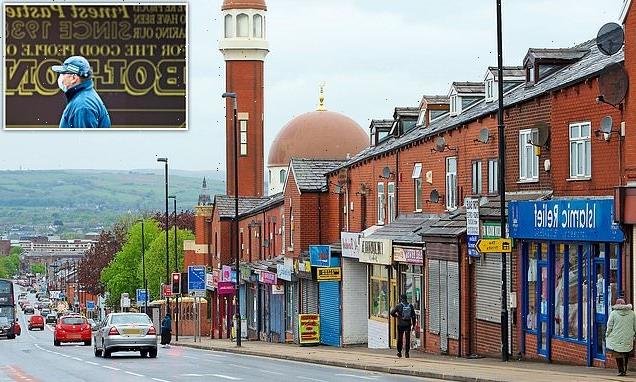 When Mohammed Khan’s small travel agency in Bolton began receiving calls from India and Pakistan from people desperate to fly home in early April, he realised something was badly wrong.

About 1,500 residents of the Lancashire town are thought to have travelled to South Asia in February and March after months of lockdown.

Many of them, believes Mr Khan, were flouting Government rules on non-essential travel.

But weeks later, as India began to see an explosion of coronavirus cases, those families were rushing to get back to the UK before Pakistan and India were put on the Government’s ‘red list’, requiring them to quarantine in a UK hotel for ten days at a cost of £1,750.

Locals believe this rush to return may have brought the so-called Indian variant to the town, made worse by the refusal of some to self-isolate at home for ten days.

Mr Khan – not his real name – is angry at the behaviour of that minority. 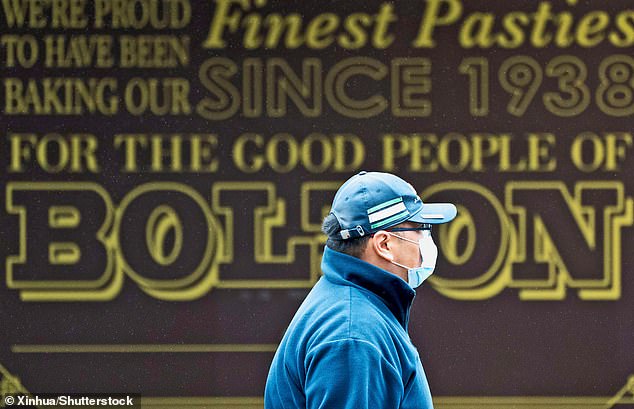 About 1,500 residents of the Lancashire town are thought to have travelled to South Asia in February and March after months of lockdown

‘It’s very selfish. People just think about themselves and their own pleasure.

‘Just because you can’t go to a restaurant or a cinema for a few months, you want to go to a completely different country,’ he says.

Coronavirus has taken a heavy toll on Bolton, once among the biggest textile producers in the world, but now, in some parts, facing chronic deprivation.

There have been 780 Covid-related deaths in Bolton and in the week to May 16 there were 982 positive tests, 438 more than the previous week.

The town’s infection rate is now 384.6 per 100,000 residents, compared with the England average of 20.6 – with more than 90 per cent of those having the Indian variant, according to leaked analysis by public health officials.

For much of last week, the mutant virus’s surge threatened Britain’s route out of lockdown. Yet an investigation by The Mail on Sunday suggests Bolton is an exception.

The Indian strain was found in three neighbourhoods to the south-west of Bolton’s town centre that collectively make up the BL3 postcode – Deane, Rumworth and Great Lever – during the last week of April.

These bustling areas of tightly packed, red-brick terraced houses are home to almost 33,000 people and 13,000 households.

About 43 per cent of the population are from an ethnic minority, predominantly British Indian or British Pakistani.

However, experts believe that it is poverty, dense housing and multi-generational homes in the areas, rather than ethnicity, that lies behind the surge of the Indian variant.

Manufacturing and wholesale retail make up about one third of the local economy, equivalent to 36,000 jobs that cannot be done from home.

More than a quarter of households live in poverty and one in eight families lives in overcrowded conditions, some with three generations in the same property.

‘Around here there could be between two and eight in a two-bedroom house,’ says John Openshaw, 73, a lifelong resident of Deane.

‘If you are talking about those numbers and Covid kicks off in a house, it is going to spread and spread.’

But why did the Indian variant ‘kick off’ in Bolton in the first place?

Mr Khan, who runs one of the many independent travel agencies in BL3, is certain it was seeded by those residents who rushed back in early April.

Pakistan and Bangladesh were added to the ‘red list’ on April 2, but the rules were not implemented until April 9.

India joined them on April 19, but travellers had until April 23 to fly home.

Travel website Skyscanner reported a 250 per cent leap in searches for flights from India to the UK in the days before the new restrictions were imposed.

‘A lot of people came back before the red zones were introduced,’ says Mr Khan.

‘There are people who were due to come back in June or August who I now see around here. I’m like, “Hold on a minute, you’re not supposed to be back for months.”’

Mr Khan was so incensed by the behaviour of some of his customers that he told them there were no seats available on flights home, even though there were.

He says: ‘When people started calling me for new tickets or ticket changes so they didn’t have to do [hotel] quarantine. I said, “No, sorry, I can’t, there are no flights.” I thought if they came back and didn’t follow the rules, I was going to go into lockdown again.

‘What’s the point of me following the rules and staying at home and keeping my distance while they go to Pakistan and India and do whatever they want?’

Of the estimated 1,500 people Mr Khan believes travelled to South Asia, he thinks fewer than 100 managed to get back in time.

According to a community leader, one man in his 50s paid £2,000 for a flight to avoid hotel quarantine. Once back, most stayed indoors for ten days, but others didn’t.

At a barber’s shop near the derelict Swan Lane Mills, a vast former cotton factory that looms over Rumworth and Great Lever, staff and customers despair at those who flouted the rules.

‘I think in the first lockdown, people were abiding by the rules,’ says a shopkeeper waiting for his beard trim. ‘They were staying at home if they had symptoms.

‘But they are sick of it now. People have been coming out when they should have been isolating.’ Asked how many had broken the rules, he replies: ‘Plenty.’

The 36-year-old owner of the barber’s shop recalls shouting last week at a man whose wife and children have tested positive for Covid-19. 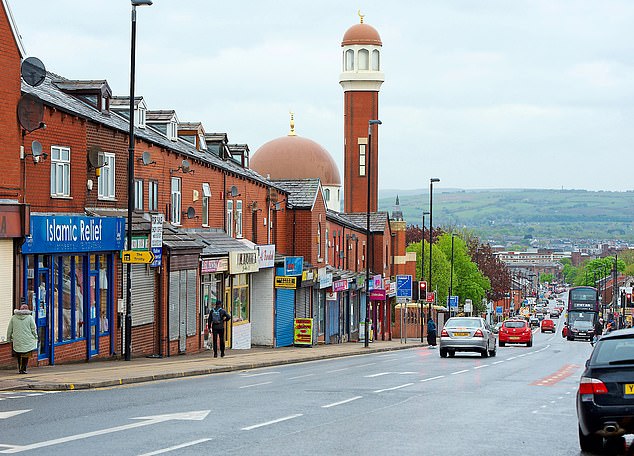 Mr Khan was so incensed by the behaviour of some of his customers that he told them there were no seats available on flights home, even though there were

‘I saw the guy yesterday walking in the road. I said, “Don’t come to my shop. Why are you coming out?” The Government has no control. People are not listening.’

Bolton’s vaccination rate of 88.9 per cent by May 9 for those aged 40 or over is in line with national figures, but it is notably lower in some areas of the town. In Rumworth South, for example, it was reportedly only 79.4 per cent.

Yasmin Qureshi, the Labour MP for Bolton South East, insisted last week that there has been ‘no vaccine hesitancy’ but some residents have delayed their vaccinations and even a handful of influential community leaders say they haven’t had their jabs.

Waiting in his car outside Quebec Hall, a vaccination centre in Deane, a 49-year-old business manager, admits delaying his visit until he heard the Pfizer vaccine was available.

‘I got fearful when I was supposed to have the AstraZeneca vaccine and I put it back deliberately because we heard Italy, Spain, Germany were going to put it on hold with the blood clots,’ he says. ‘I wanted the Pfizer one.’

Half a mile away on Derby Street, the Zakariyya mosque has spent £11,000 on face masks and has installed sanitiser dispensers and social-distancing signs. 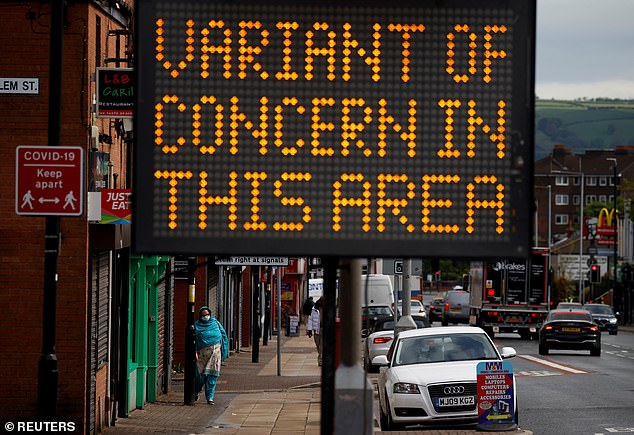 The Indian strain was found in three neighbourhoods to the south-west of Bolton’s town centre that collectively make up the BL3 postcode – Deane, Rumworth and Great Lever – during the last week of April. Pictured: A warning sign in Bolton, May 17

Its president, Edris Musa, says the Government ‘should have acted a lot earlier in shutting down people coming in from India’ but admits that he has not been vaccinated – although he does not tell others to shun the jab.

‘The vaccine is at an experimental stage,’ he claims. ‘Someone in my position, if I took the vaccination and, God forbid, something happened to me, what would happen to this place? Should I take that risk?’

An NHS source said most of Bolton’s mosques had embraced vaccination, but others were reluctant, adding: ‘There are 49 mosques in Bolton and we have got good relationships with a large majority… and then we have quite a few that won’t put any of our messages out.’

Encouragingly, local health bosses appear to be winning the race to bolster the town’s defences against the Indian variant.

Crucially, cases have not translated into a major surge of hospital admissions and deaths.

As he seeks to rebuild his travel business, Mr Khan says: ‘I don’t want a third lockdown.

‘It’s a team effort. We all have to be in it together.’