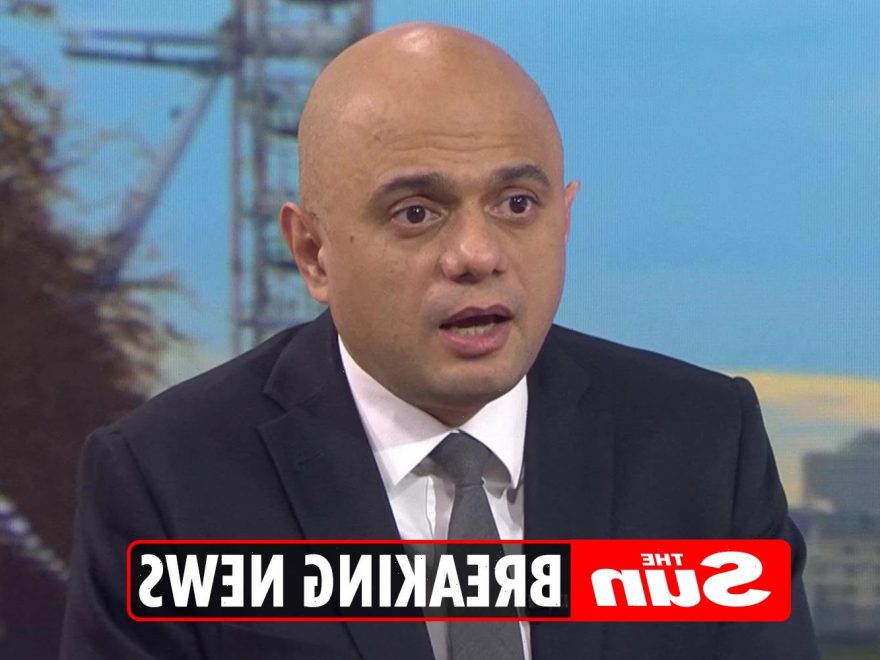 MANDATORY face masks in shops and public transport will return from Tuesday in a bid to fight the new Covid variant, Sajid Javid has revealed.

The Health Secretary confirmed the move this morning, and warned flouters could be fined after the first two cases of the Omicron strain were reported in the UK. 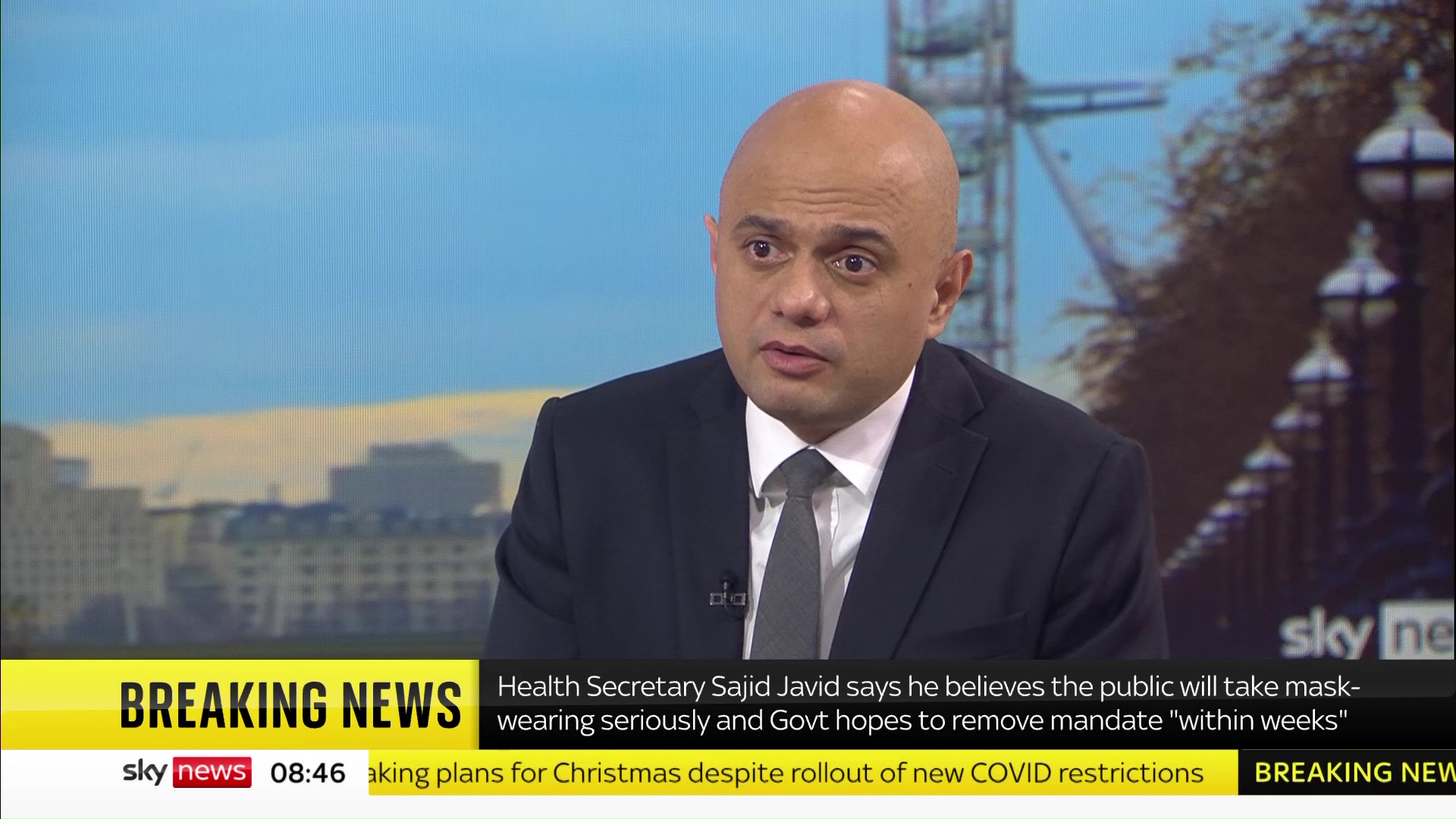 It comes after Boris Johnson ordered the return of masks and for contacts of anyone infected with the variant to self isolate.

Speaking to Sky's Trevor Philips on Sunday, Mr Javid admitted "we will never defeat" Covid as the Government launched a fresh crackdown against the virus.

He has asked Government vaccine advisers the JCVI to broaden the booster programme, which is currently open to all over-40s.

When asked how mandatory mask-wearing will be enforced, Health Secretary Sajid Javid said: "I do think people will take this more seriously".

Masks have remained compulsory on London's Tube system, but Transport for London figures show only 108 people out of the millions who travel on the Tube have been removed for not wearing face coverings.

But Mr Javid insisted: "Over the last few days, and of course this has been very fast moving, people will have been able to understand the concerns over this new variant.

"They will be concerned not just for themselves but for their friends and family and want to know their Government is taking proportionate action.

"So I think that will encourage people anyway to listen and think about some of he new measures and take them seriously."

He added: "I hope this is something we can remove within weeks."

MPs will vote on the new restrictions within 28 days after legislation is placed before the Commons tomorrow.

Mr Javid told the BBC's Andrew Marr Show there had been no more confirmed cases in the UK, but admitted "there may well be more".

Targeted testing was being carried out in Essex and Nottingham where the two infected people are located.

Boris Johnson announced the added restrictions yesterday after the two cases of the dreaded super-spreading strain were reported..

The two cases – which are currently isolating – are said to be linked to travel in South Africa.

But Mr Johnson said tighter border controls would only go so far to quell the variant's spread in Britain, adding "proportionate and targeted measures" were now needed.

He told a Downing Street news briefing: "We need to slow down the spread of this variant here in the UK.

"I an addition to the measures we are already taking, we will require all contacts of those who test positive with a suspected case of Omicron to self-isolate for 10 days regardless of your vaccination status.

"We will also go further in asking all of you to help contain the spread of this variant by tightening up the rules on face coverings in shops and on public transport."

The latest clampdown is expected to require everyone in shops, trains and buses in England to wear a face covering – unless they are medically exempt.

The exact rules are expected to be set out in "the next day or so", with Boris adding Brits will go back "to a position where you have to wear them in retail settings or on public transport".

Travellers arriving into the UK will also have to take a mandatory PCR test on or before day two – and they must isolate until they get a negative result. 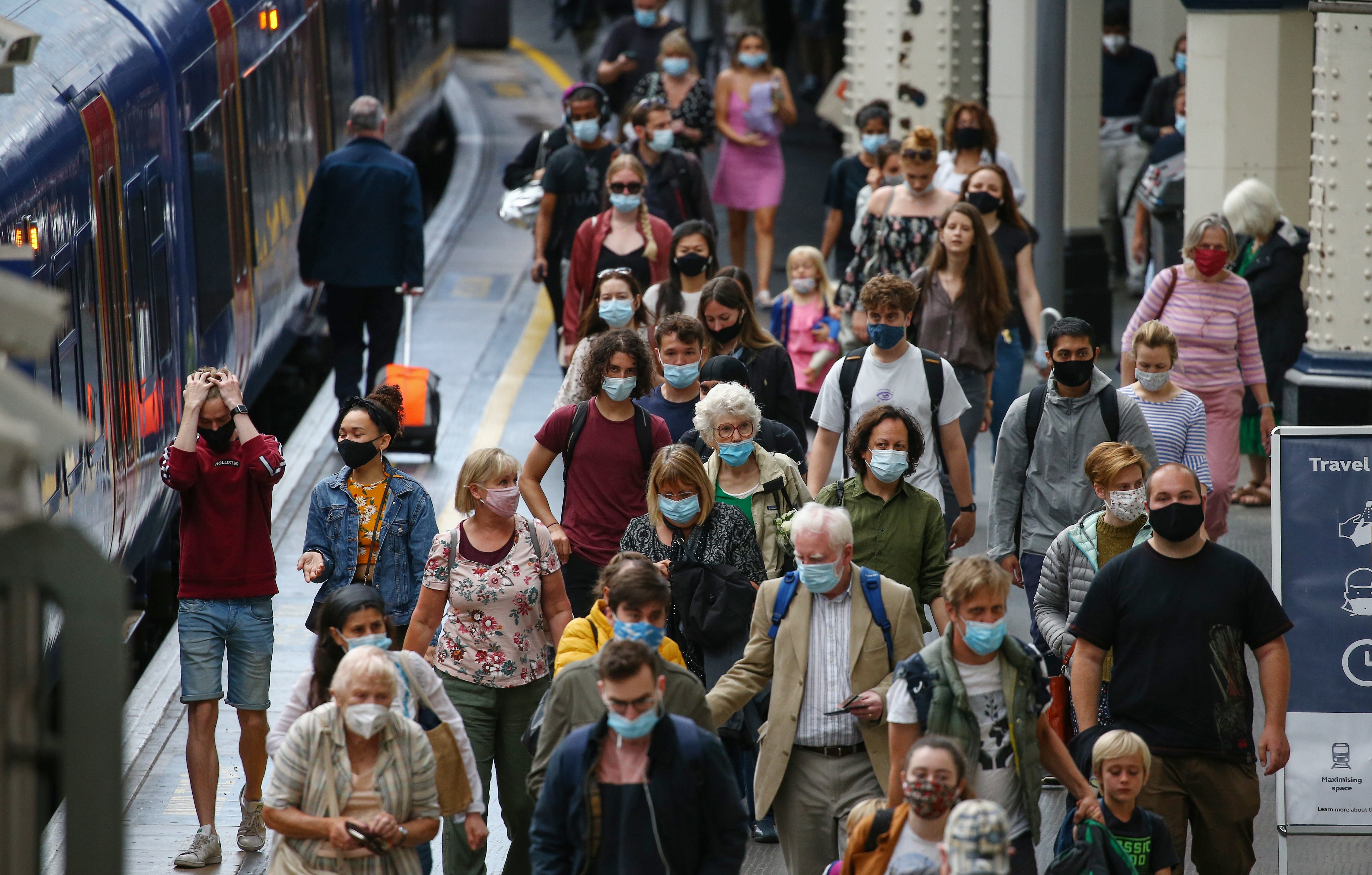 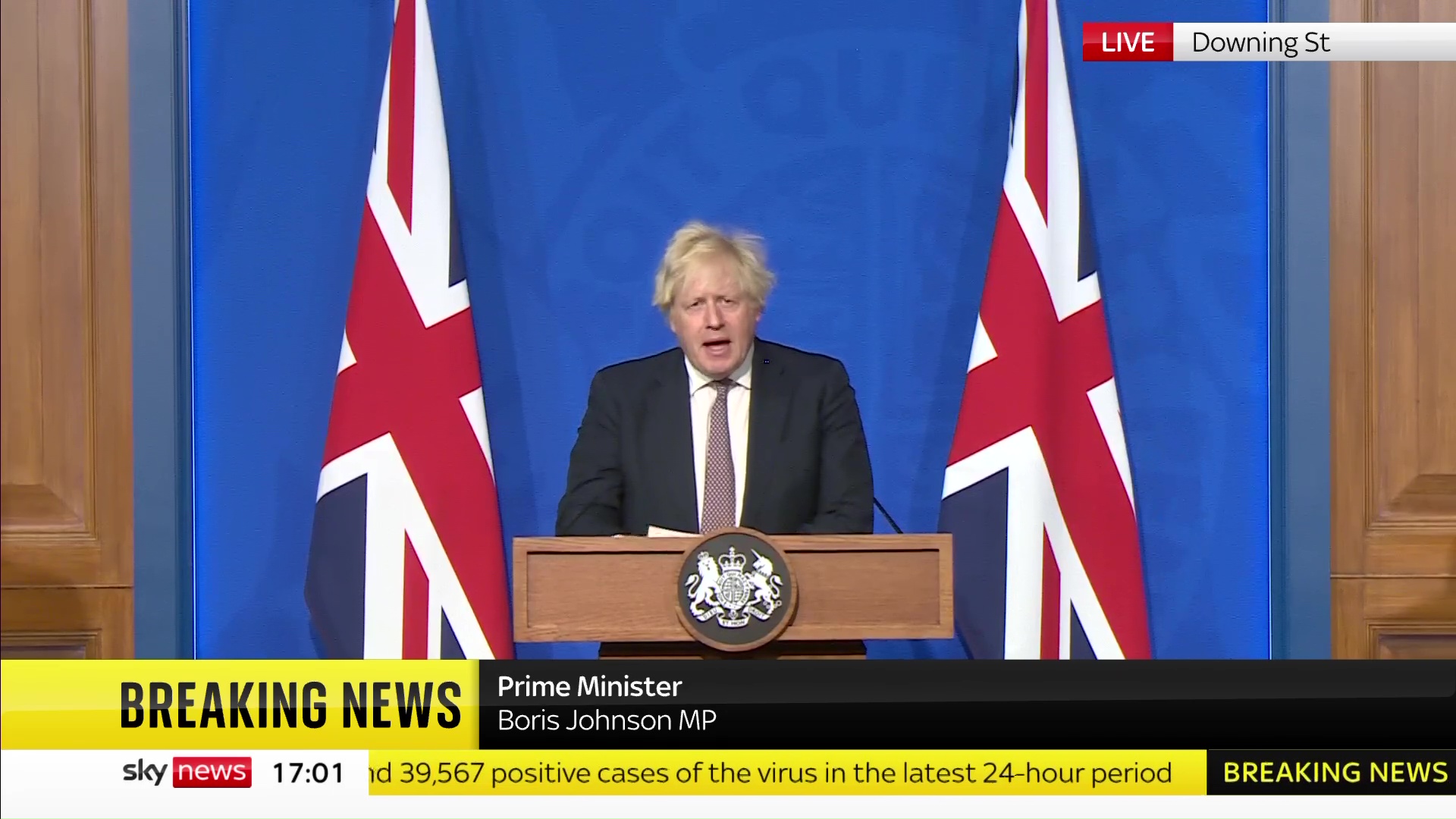 Boris said the new tightened rules on mask-wearing is the "responsible course of action" in a bid to stop the spread of the new mutant strain.

"These are targeted measures to provide confidence and protection, and we will review these measures in three weeks to ensure they are working effectively," he told journalists.

But the restrictions, which do not apply to Scotland, Wales or Northern Ireland, also mark a screeching U-turn in England's roadmap out of lockdown.

Brits were finally allowed to fling off their masks on July 19 this year, as the nation celebrated Freedom Day and an end to all restrictions.

While the Government still recommend masks in certain situations, businesses and individuals were largely allowed to decide when they did and didn't cover up.

These are targeted measures to provide confidence and protection, and we will review these measures in three weeks to ensure they are working effectively.

Mr Javid said the two people who tested positive had links to travel in South Africa where Omicron has seen an explosion of cases.

He added targeted testing is now being carried out in Britain, as travel restrictions were set to be introduced for Malawi, Mozambique, Zambia and Angola.

"I was informed that they have detected two cases of this new variant, Omicron, in the United Kingdom.

"One in Chelmsford, the other in Nottingham."

It comes after senior Government scientists warned the mutant Omicron variant was the “worst variant they have seen so far” – with vaccines expected to be at least a third less effective against it.

Dr Tom Peacock, a virologist at Imperial College London, said the variant could be “of real concern” as 32 mutations in its spike protein could enable it to evade a person’s immune system more easily and spread to more people.

On Twitter, he said the variant “very, very much should be monitored due to that horrific spike profile” that could make it more contagious than any other variant so far.

While the effectiveness of vaccines against Omicron is currently unclear, Mr Johnson said there are "good reasons for believing they will provide at least some measure of protection".

He said today "we're going to boost the booster campaign" by asking the Joint Committee on Vaccination and Immunisation (JCVI) to consider giving boosters to "as wide a group as possible as well as reducing the gap" between second doses and the booster.

Meanwhile Professor Chris Whitty today urged people to "take sensible precautions" as scientists work to analyse any "possible increase in transmissibility or resistance to vaccines" in light of the Omicron strain.

The Chief Medical Officer said: “We will continue to work closely with the international community to quickly gather and analyse information on this variant to understand any possible increase in transmissibility or resistance to vaccines.

“It is important that everyone takes sensible precautions – get a PCR test if you have symptoms, isolate when asked, wear a face covering in crowded and enclosed spaces, ventilate rooms, get your vaccine and boosters as soon as you can.”

It became compulsory to wear a face covering on public transport in the UK on June 15, 2020.

Wearing a face mask in shops became compulsory on July 24, 2020.

After the restrictions lifted, some businesses like Transport For London continued to ask customers to wear face coverings.

Children under the age of 11 and people with breathing problems, mental illness, and/or physical disabilities are exempt from wearing masks.

Carrying an exemption card or badge is a personal choice and is not required by law. 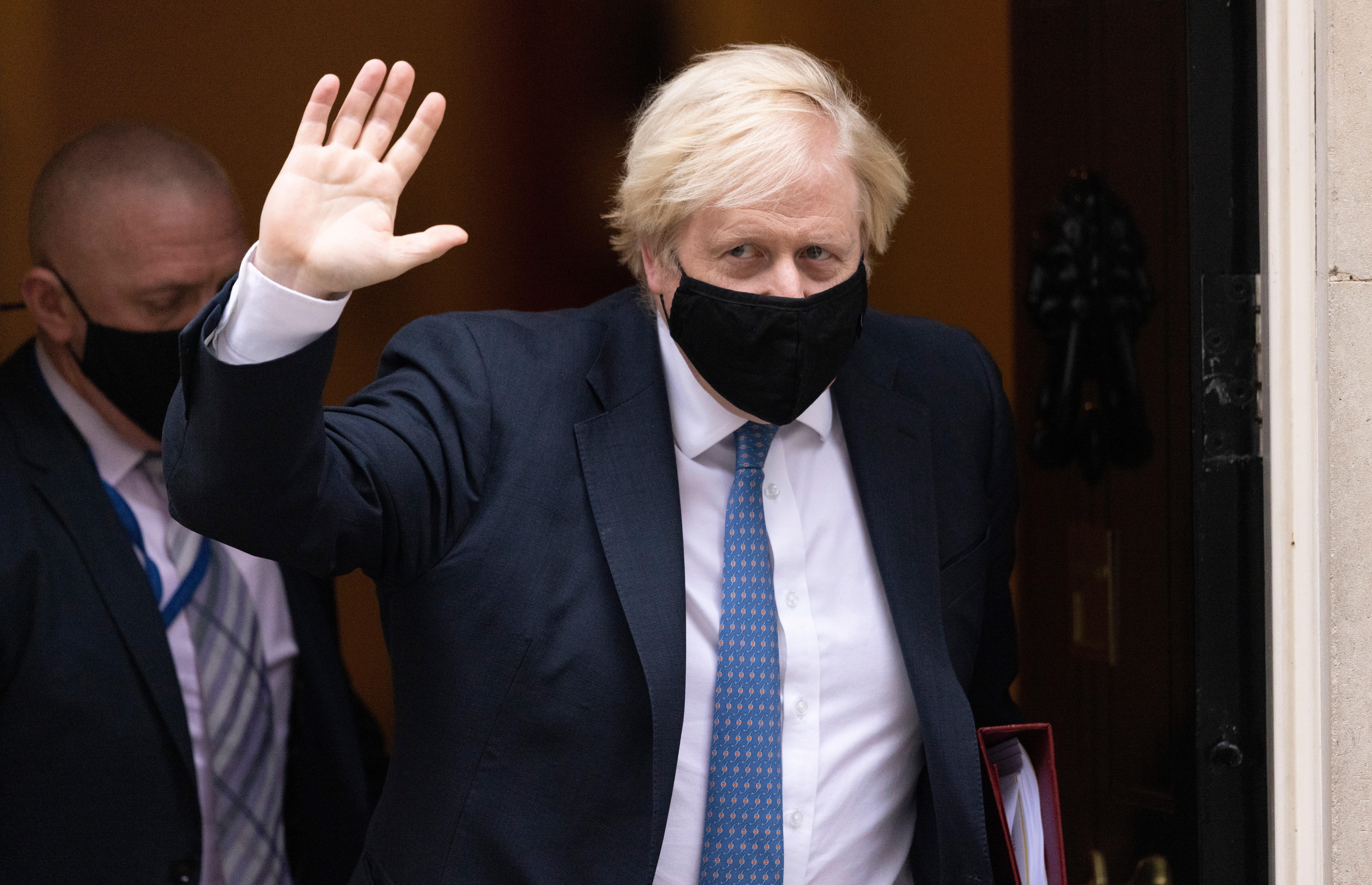 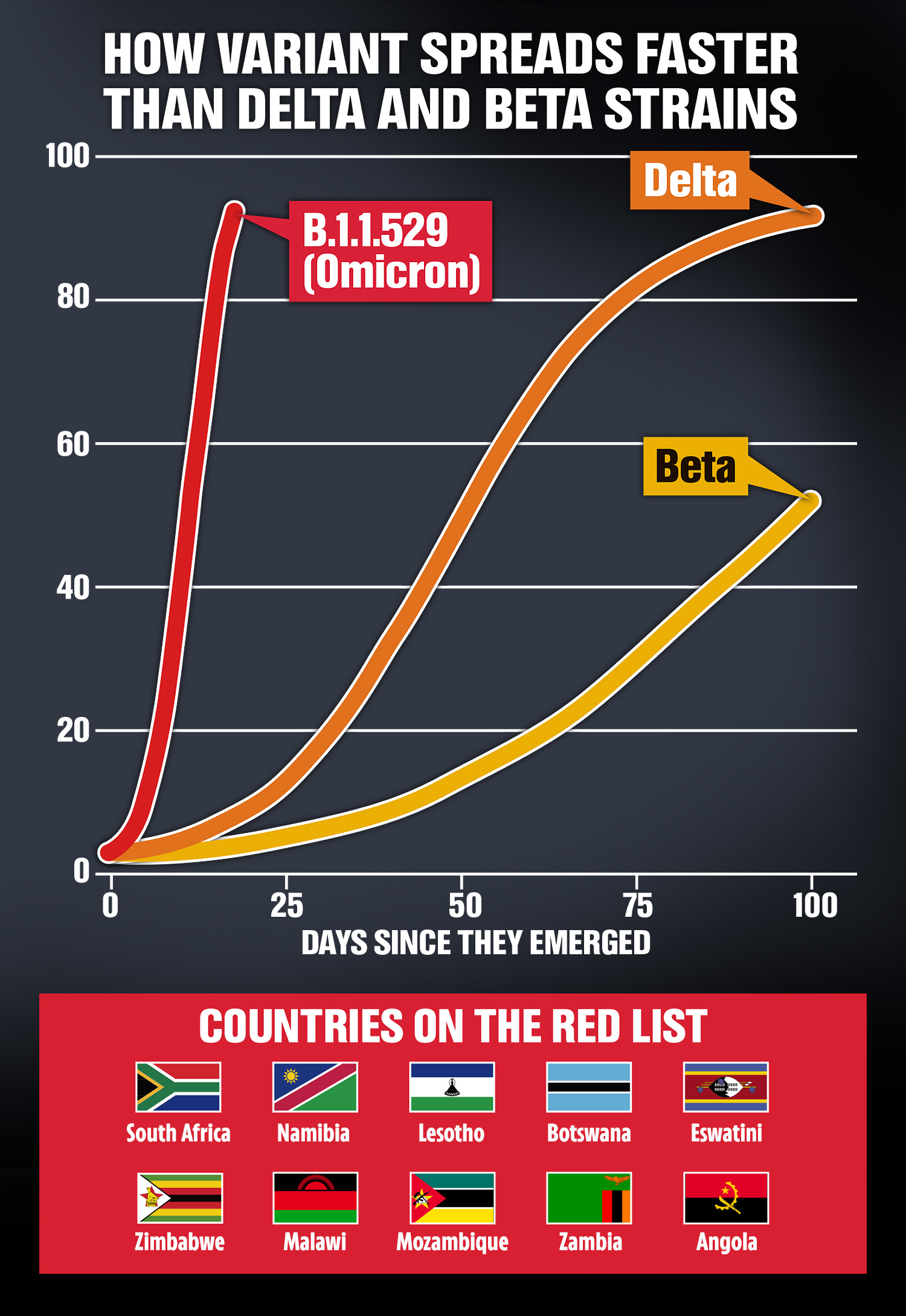