A former senior Special Air Service soldier who served in Afghanistan with war veteran Ben Roberts-Smith has told the Federal Court he couldn’t say whether Roberts-Smith was complicit in the murder of two Afghan prisoners and he relied on his subordinates to give truthful reports about any killings.

Person 81, a former SAS troop commander whose identity is suppressed for national security reasons, was the final witness to give evidence in Roberts-Smith’s defamation case against The Age, The Sydney Morning Herald and The Canberra Times. He was cross-examined about a key issue in the trial, namely the circumstances in which two Afghan men died during a mission at a compound dubbed Whiskey 108 in 2009. 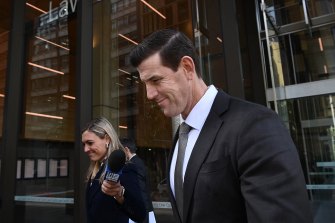 Roberts-Smith is suing The Age, the Herald and The Canberra Times for defamation over a series of articles in 2018 he says portray him as a war criminal who was involved in the unlawful killing of unarmed Afghan prisoners. Under the rules of engagement that bound the SAS, prisoners could not be killed.

The decorated former soldier denies all wrongdoing and has said any killings in Afghanistan, including two during the Whiskey 108 mission, happened lawfully in the heat of battle. The media outlets are seeking to rely on a defence of truth and allege Roberts-Smith was involved in six unlawful killings in Afghanistan, including the execution of two men who emerged from a tunnel at Whiskey 108.

Person 81, who was called by Roberts-Smith’s legal team to give evidence, was troop commander in Afghanistan during the Whiskey 108 mission. He said on Wednesday that he was not informed by his soldiers that any men had been discovered in a tunnel.

During cross-examination by the newspapers’ barrister, Nicholas Owens, SC, on Thursday Person 81 agreed he was unable to say one way or another whether there were people in the tunnel, only that he didn’t see any himself.

“I take it, in your role as commander, you are, in fact, quite busy at all times during the mission?” Owens asked. “That is very correct,” Person 81 replied.

Person 81 told the court he had a memory of seeing fighting-age Afghan men inside Whiskey 108, but could not remember where.

Roberts-Smith has told the court no men were found inside the tunnel and two insurgents were killed lawfully outside Whiskey 108, including one man killed by him. He called four SAS witnesses who supported his account about the tunnel. Another soldier, Person 27, said he did not have “any recollection of anyone coming out of a tunnel”, although he was not in the area.

SAS witnesses called by the newspapers have said at least two men were found in a tunnel at Whiskey 108 and taken prisoner. A serving SAS soldier, Person 41, told the court he saw Roberts-Smith execute one unarmed Afghan man that day and direct another soldier, Person 4, to kill a second man. The newspapers allege the men were taken from the tunnel.

Person 81 agreed on Thursday he “wouldn’t know” whether two men killed on the day of the Whiskey 108 mission were prisoners. He also “couldn’t say” whether one of the men was executed by Roberts-Smith, or whether the second man was executed by Person 4 with Roberts-Smith’s encouragement. He did not see anything that made him suspect this had occurred, he said.

Person 81 agreed he relied on patrol commanders, who headed smaller teams of soldiers within the troop, to give honest and accurate information about any killings.

Roberts-Smith will officially close his case on Friday before the parties return to court in July for final submissions.