The maverick genius who was the REAL ‘Q’: Ever wondered who inspired James Bond’s bizarre gadgets? A new book reveals the gloriously eccentric story of ‘MI9’ and the boffin who invented exploding coal, steel-cutting shoelaces and domino maps

Whether it’s bagpipe flame-throwers, spear-wielding umbrellas or sports cars that turn into submarines, everyone has a favourite James Bond spy gadget, courtesy of the ever-resourceful ‘Q’ Branch.

While it has long been assumed that novelist Ian Fleming used an MI6 department as the inspiration for 007’s brilliantly bonkers gadgets — exploding shark capsule, anyone? — credit should actually go to MI9, or ‘Military Intelligence 9’, as revealed in a new book, MI9: A History Of The Secret Service For Escape And Evasion In World War Two, by Helen Fry.

A department so top secret that most people have never even heard of it, it relied heavily on the inventions of a prematurely balding maverick called Christopher Clayton Hutton.

‘Clutty’, as he was known, was a former soldier, airman and journalist, who had been obsessed with escapology and illusions since boyhood. 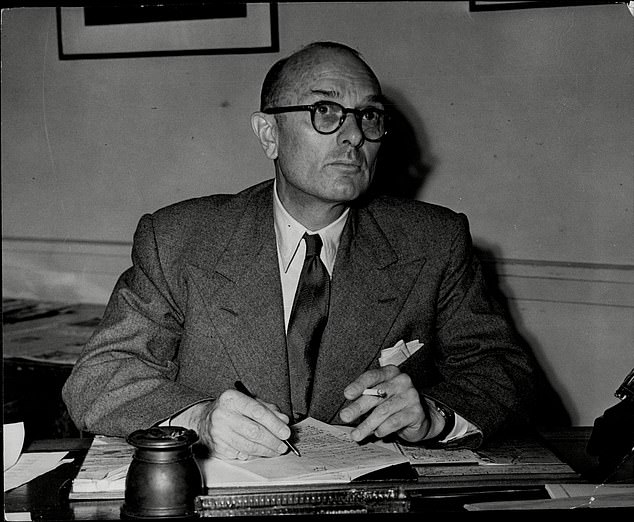 Christopher Clayton Hutton, the genius inventor behind gadgets that helped British and Allied troops escape during the war

He was once described as ‘mad and brilliant’, and would have given today’s Q a run for his money when it came to inventiveness.

Set up in 1939 and run by Major Norman Crockatt (later Brigadier) and Clutty, MI9 was responsible for helping airmen and prisoners find their way home from behind enemy lines.

To this end, it supported resistance networks and encouraged a philosophy of ‘escape-mindedness’, drumming into every soldier that it was their duty to try to escape.

A single airman took three months to train at a cost of £15,000, so the War Office needed them back.

In turn, the boffins at MI9 did everything they could to support them, designing and supplying countless gadgets including pencil cameras, daggers hidden in pens, wire saws hidden in shoe laces and playing cards containing maps of Europe.

Clutty, in particular, was relentless in his task. He hired a magician to help devise hidden compartments and built himself an underground bunker in the middle of a field — in the grounds of the MI9 headquarters in Wilton Park, Beaconsfield — so he could work undisturbed. 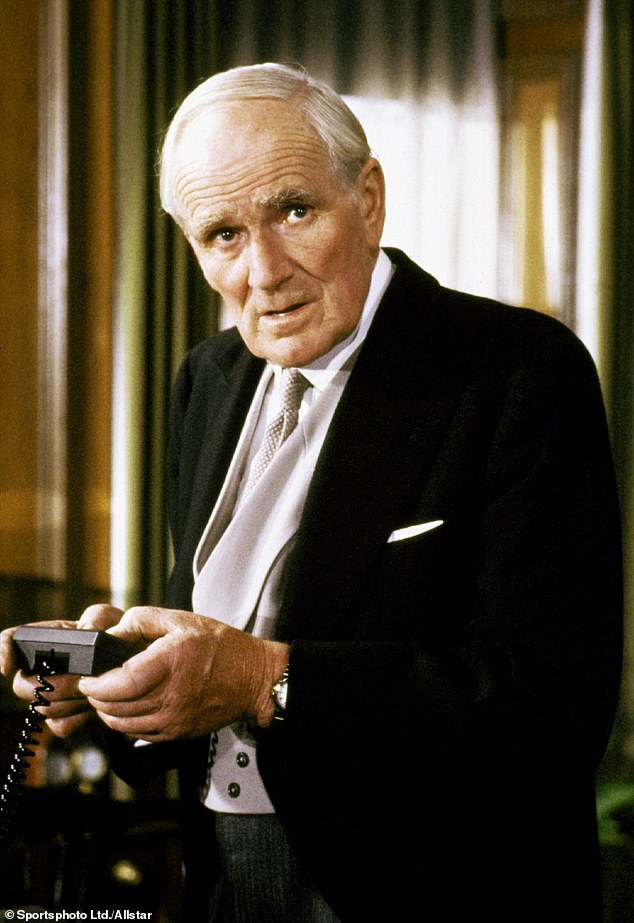 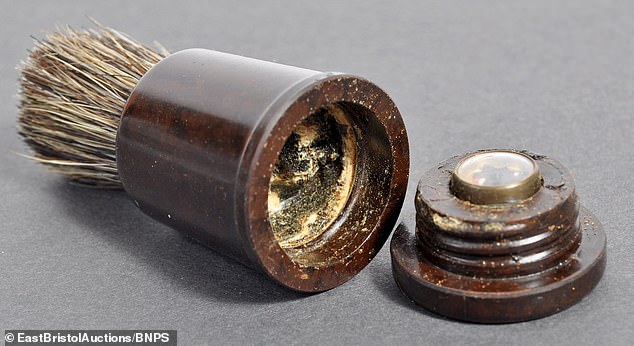 A British bakelite shaving brush, dated 1945, fitted with a hidden escape & evade compass. One of the remarkable collection of ‘secret weapons’ sent to British soldiers behind enemy lines in World War Two

Such was his disregard for protocol that he was frequently in trouble with the police and authorities for helping himself to Army stocks without permission, and would have given today’s Health and Safety executives multiple coronaries.

But he was a genius.

It was he who persuaded Waddington to adapt their Monopoly sets into escape kits, complete with maps of Europe and compasses. He also helped design the standard issue maps, nearly half a million of which were printed on non-rustling silk with non-running ink, which could be hidden inside a chess piece.

Naturally, it was also Clutty who came up with a compass concealed in a jacket button with reverse screw threads, on the basis that it would never occur to the ever-orderly German mind that something might unscrew the wrong way. He was right. 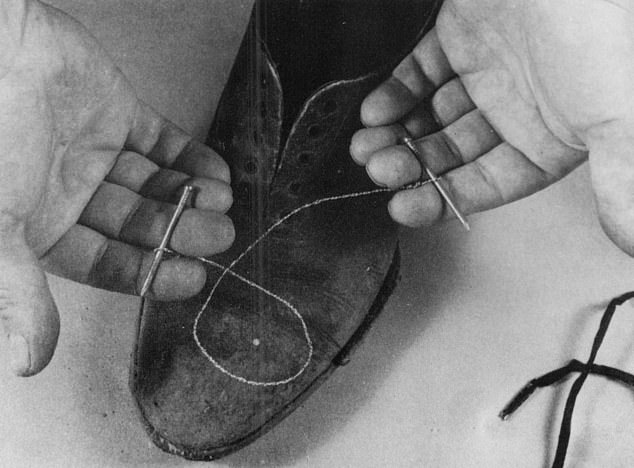 Steel-cutting laces: A Gigli, a flexible saw made of interlaced cutting wire, and strong enough to cut through barbed wire fences and metal bars, could be concealed in an ordinary boot or shoelace

And in 1942, every invention was carefully recorded in a large red leather-bound catalogue entitled Per Ardua Libertas — Liberty through Adversity — for the benefit of visiting American intelligence officers.

Of course, unlike 007’s flaming bagpipes and killer umbrella, everything MI9 created was small enough to be hidden inside something else.

Clutty’s gadgets might not have been quite as flamboyant as Bond’s bullet-proof Aston Martin or ski pole gun, but they actually worked.

Of the 35,000 British and Allied troops who escaped and made it to safety during the war, more than half were carrying one of his silk maps, and most were aided by at least one of the following inventions. 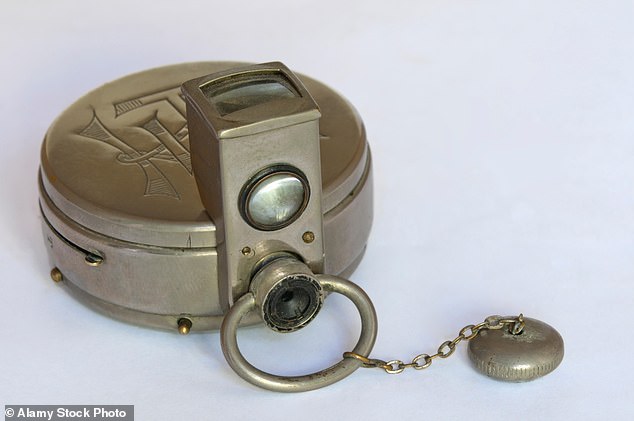 Hacksaws, silk maps and compasses were hidden in Monopoly boards, boxes and pieces.

Chess set maker Jaques of London was commissioned to draw up plans for a box with hidden compartments, and knights were adapted to include a watertight compartment for special ink for document forgery.

Waddington also produced special packs of cards designed to fall apart when dropped in water, to reveal 48 overlapping sections of a map of Europe. The four aces provided a separate map of roads, railways and rivers. 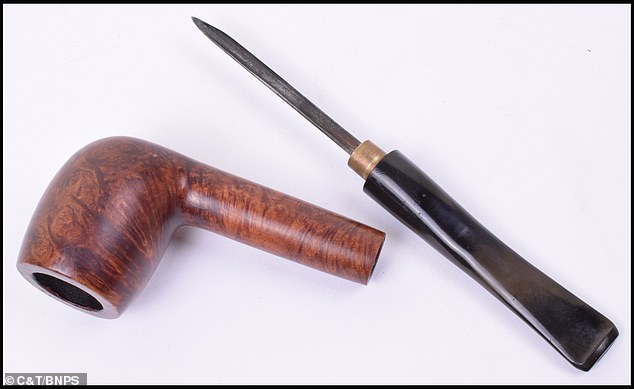 Concealed Assassination Pipe Dagger: A James Bond style concealed weapon which British spies had at their disposal in the Second World War

The Geneva Convention allowed prisoners to receive parcels —including food, clothing and games (to relieve boredom) — from families and relief organisations.

So Clutty invented a slew of fictitious charities and soon every sixth food parcel and ration pack sent to prisoners of war contained some of his inventions.

Clutty’s kits are credited with helping 316 escape attempts from Colditz Castle in Saxony, Germany, with 32 men making it home.

Compasses were hidden in everything from match boxes to razor blades. Hutton invented a particularly effective model from a magnetised razor blade — when the blade was hung on a thread, the ‘G’ in Gillette pointed north.

Another success was an invisible ink developed for plain linen handkerchiefs which, when soaked in urine, revealed a map.

But it was only a fleeting map — a quick dip in water caused the map to disappear again. 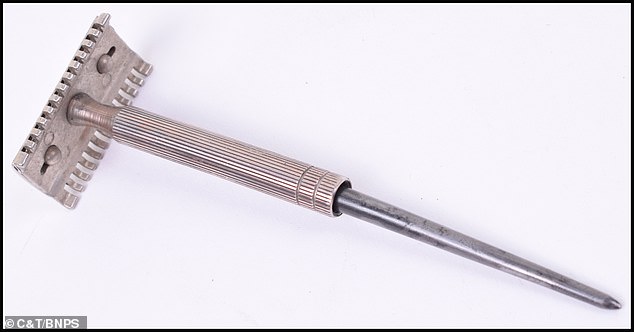 Escape Razor Compass Set: Compasses were hidden in everything from match boxes to razor blades

Grey woollen blankets sent to prisoners of war would arrive with maps or clothes patterns printed with invisible ink.

After a quick dip in water mixed with chemicals smuggled separately in jam pots, hey presto, the design became visible and the prisoners could tailor an outfit for their escape.

RAF men received special ‘escape boots’ with hollow heels containing silk maps, a compass, a file and a small knife, so that they could cut away the ankle section, creating black shoes which could pass as civilian footwear.

A nice idea, but a rare Clutty failure. They were not warm enough during winter flights, prone to waterlogging in heavy rain and were later abandoned by MI9.

MI9: A History Of The Secret Service For Escape And Evasion In World War Two by Helen Fry. Published by Yale, £20.