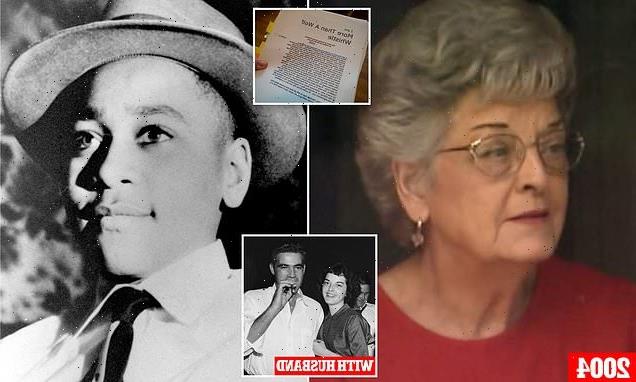 White woman, 87, blamed for death of Emmett Till says she is a VICTIM in her newly-leaked autobiography and claims she tried to STOP her husband’s lynch-mob from killing the teen

A white woman blamed for the racist lynching of Emmett Till claimed she is a victim in her leaked autobiography – while also asserting that she lied to try and protect the black teenager from his terrible fate.

In a leaked 99-page manuscript obtained by The Associated Press, Carolyn Donham, 87, insists that she ‘always felt like a victim as well as Emmett’.

Donham went on to moan that she ‘paid dearly with an altered life’ after Till, 14, was killed by her husband Roy Bryant and her brother-in-law J.W. Miliam in Money, Mississippi in 1955.

Donham, who was was just 21 at the time – and has since maintained her innocence. Last week, a group of activists stormed a North Carolina senior living facility in an attempt to arrest her after unearthing an arrest warrant, but it later transpired Donham did not live there.

‘I did not wish Emmett any harm and could not stop harm from coming to him, since I didn´t know what was planned for him,’ she wrote in the unpublished piece, titled, ‘I am More Than A Wolf Whistle.’

‘I have always prayed that God would bless Emmett’s family. I am truly sorry for the pain his family was caused.’

In the piece, first reported by the Mississippi Center for Investigative Reporting, Donham astonishingly claims it is at this point that she tried to protect the boy, telling the two that they had picked up the wrong man.

‘I tried to protect him[Till] by telling Roy that `He´s not the one. That´s not him. Please take him home.’

Donham went on to claim that she didn’t want Till killed. 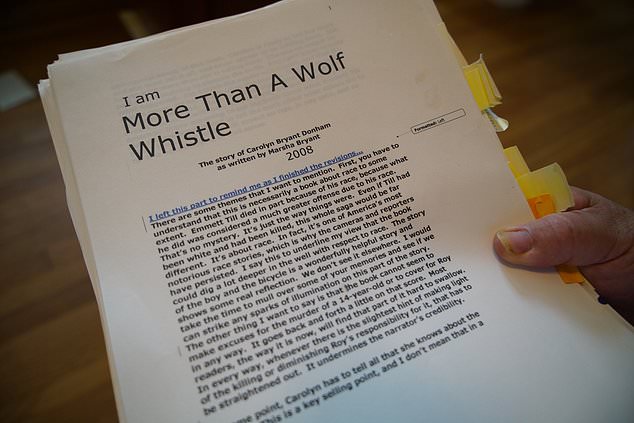 Pictured is a copy of alleged Emmett Till accuser Carolyn Bryant Donham’s memoir where she insists innocence in the infamous 1955 killing, which helped spur the US civil rights movement

The case gained prominence after a magazine published a photo of Till’s mangled corpse and mainstream media picked up on the story.

Till – who was beaten and tied with barbed wire to a cotton gin before being tossed by his two assailants in the Tallahatchie River – was so disfigured that his mother could only identify it by an initialed ring.

He was visiting from Chicago at the time of the brutal killing, which helped galvanize the modern civil rights movement.

The crime has become a ingrained in the history of the US, with Donham’s then-husband Roy Bryant and J.W. Milam acquitted of murder charges but later confessing to the crime in a magazine interview. 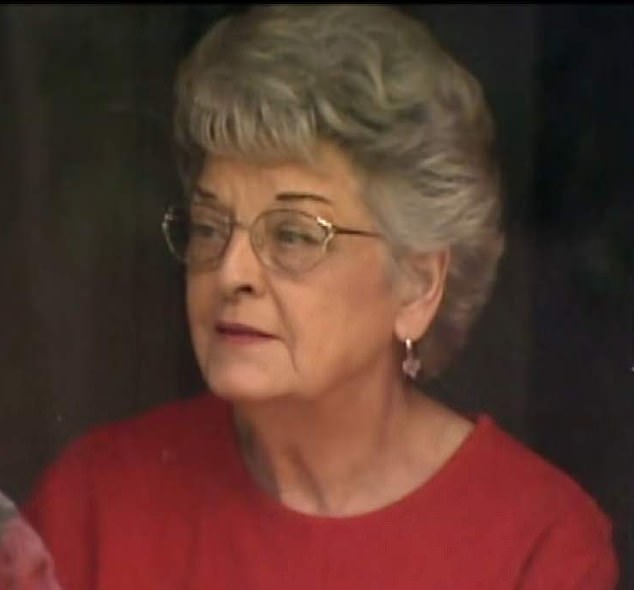 Carolyn Bryant Donham, who accused black teen Till of making improper advances before he was brutally lynched in 1955, has penned a memoir about the highly publicized killing, where she denies wanting the youth killed and instead insists she was a victim 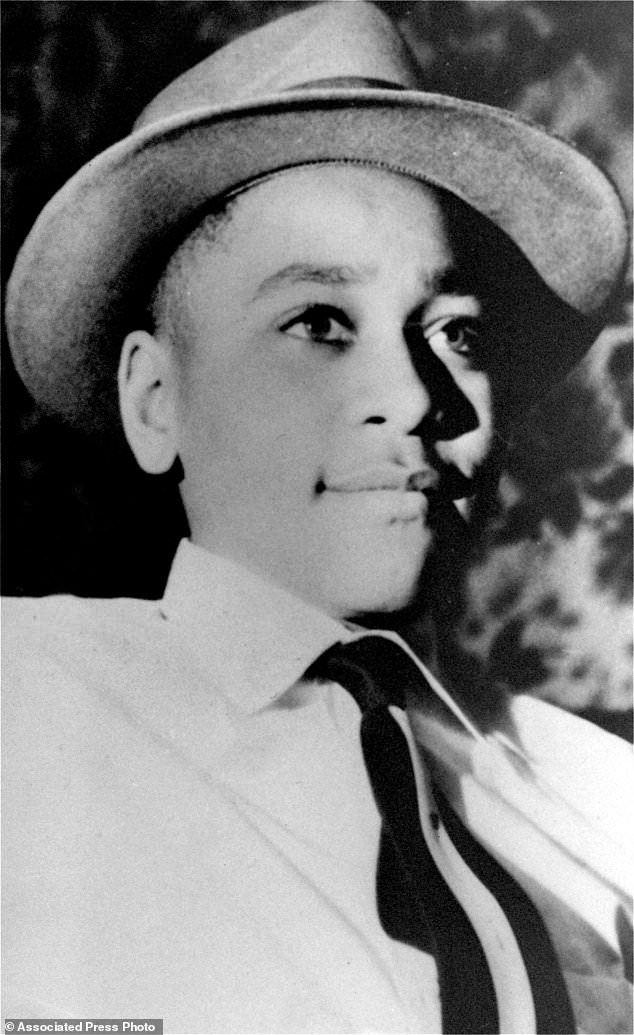 Emmett Louis Till, a black 14 year old Chicago boy, whose weighted down body was found in the Tallahatchie River near the Delta community of Money, Mississippi, August 31, 1955. Local residents Roy Bryant, 24, and J.W. Milam, 35, were accused of kidnapping, torturing and murdering Till for allegedly whistling at Bryant’s wife

The work is signed ‘Carolyn’ but was reportedly transcribed by her daughter-in-law Marsha Bryant.

Historian and author Timothy Tyson of Durham, said he obtained a copy from Donham while interviewing her in 2008, provided a copy to the AP on Thursday.

Tyson had placed the manuscript in an archive at the University of North Carolina with the agreement that it not be made public for decades, though he said he gave it to the FBI during an investigation the agency concluded last year. 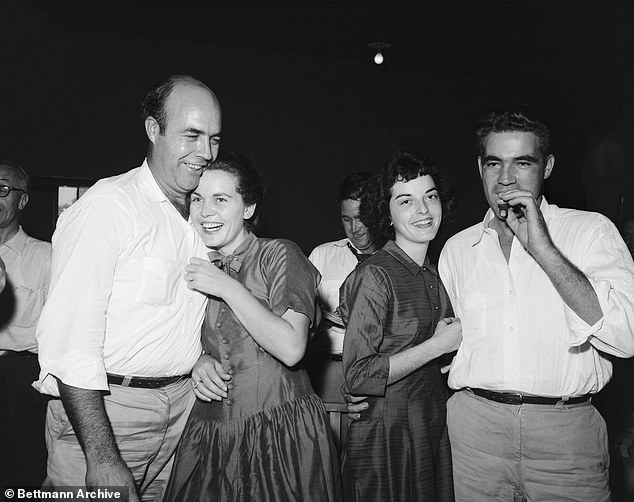 After their acquittal in the Emmett Till trial, defendant Roy Bryant (right), Donham’s husband, smokes a cigar as his wife happily embraces him and his half brother, J.W. Milam and his wife show jubilation. Bryant and Milam were cleared by an all white, male jury in the 1955 slaying

He said he decided to make it public now following the recent discovery of an arrest warrant on kidnapping charges that was issued for Donham in 1955 but never served.

‘The potential for an investigation was more important than the archival agreements, though those are important things,’ Tyson said. ‘But this is probably the last chance for an indictment in this case.’

A cousin of Till who leads the Emmett Till Legacy Foundation, Deborah Watts, said the memoir is new evidence that shows Donham’s involvement in the case and is particularly important when combined with the arrest warrant.

‘I truly believe these developments cannot be ignored by the authorities in Mississippi,’ she said.

The memoir is remarkable not only because it’s the most extensive account of the sensational episode ever recorded by Donham, but also because it contains contradictions that raise questions about her truthfulness through the years, said Dale Killinger, a retired FBI agent who investigated the case more than 15 years ago.

For instance, Donham claims in the memoir to have yelled for help after being confronted by Till inside the family grocery store in Money, Mississippi, yet no one ever reported hearing her screams, Killinger said.

Also, Donham never previously mentioned that she and Roy Bryant chatted about the abduction. In the manuscript, she says they did.

‘That seems ludicrous,’ Killinger said. ‘How would you have a major event in your life and not talk about it?’ 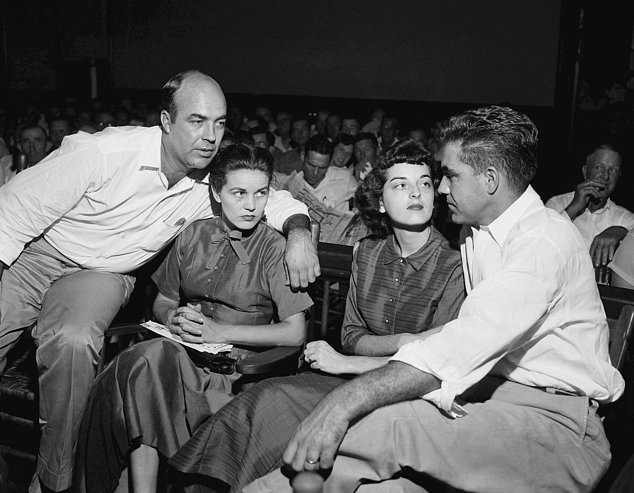 In this September 23, 1955, photo, Milam, left, his wife, second from left, Bryant, far right, and his wife, Donham, sit together in a courtroom in Sumner, Mississippi. Bryant and his half-brother Milam were charged with murder but acquitted in the kidnapping and torture of 14-year-old black teen Emmett Till after he allegedly whistled at Donham

The Justice Department closed its most recent investigation into the case in December and Mississippi authorities haven’t given any indication they plan to pursue the kidnapping warrant or other charges against Donham.

But the Till family is pushing authorities to act.

Keith Beauchamp, a filmmaker whose documentary preceded the Justice Department probe in which Killinger was involved and that ended without charges in 2007, said the memoir shows that Donham ‘is culpable in the kidnapping and murder of Emmett Louis Till and to not hold her accountable for her actions, is an injustice to us all.’

‘Our fight will continue until justice is finally served,’ Beauchamp said.

It was Beauchamp, along with two of Till’s relatives, who discovered the arrest warrant with Donham’s name on it earlier this month in the basement of a Mississippi courthouse.

Tyson, the historian who provided the roughly 35,000-word manuscript to the AP, helped spur the government’s most recent investigation into the killing by publishing a book in 2017 in which he quoted Donham as saying she lied when she claimed Till grabbed her, whistled and made sexual advances.

In the memoir, however, she claims Till did do those things. During the most recent investigation, Donham told the FBI she had never recanted, the Justice Department said.

Tyson said Donham’s statements in the memoir exonerating herself of wrongdoing need to be taken with ‘a good-sized shovel full of salt,’ particularly her claim that Till identified himself to the men who took him from the family home and later admitted killing him.

‘Two big white men with guns came and dragged him out of his aunt and great-uncle’s house at 2 o’clock in the morning in the Mississippi Delta in 1955. I do not believe for one minute that he identified himself,’ Tyson said.

Neither Donham nor any of her relatives have responded to messages and phone calls from the AP seeking comment. It is unclear where Donham currently lives or if she has an attorney. Her last known address was in Raleigh, North Carolina. 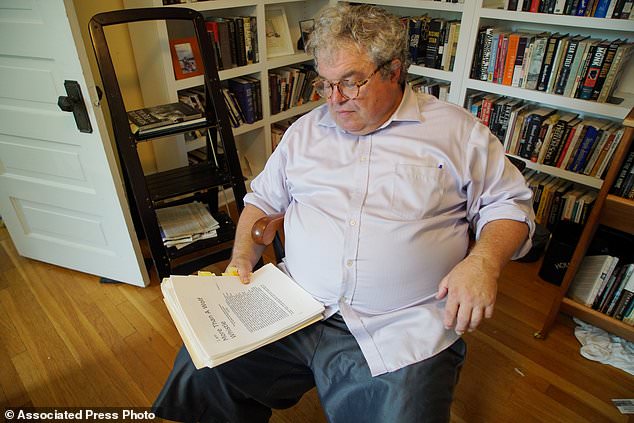 Author Timothy Tyson looks at a copy of Carolyn Bryant Donham’s memoir in his home in Durham, North Carolina, on Thursday 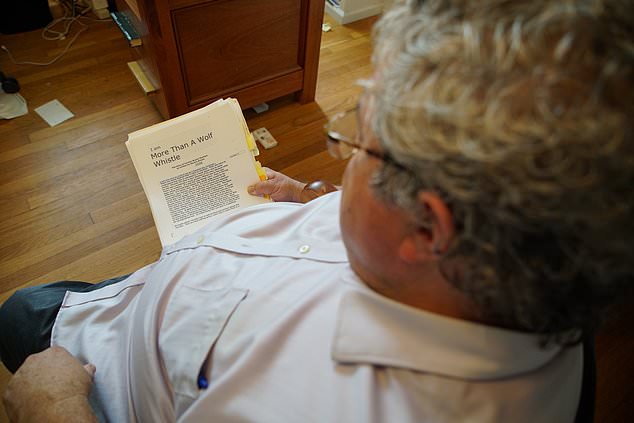 Author Timothy Tyson looks at a copy of Carolyn Bryant Donham’s memoir in his home in Durham, North Carolina 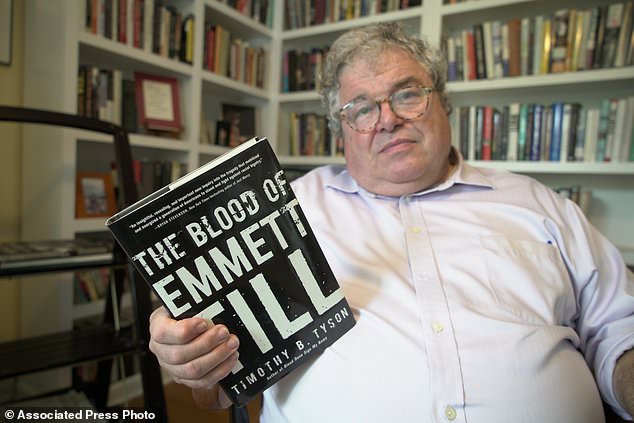