Dozens of migrants have today been caught crossing the English Channel, a day after a record 90 including 15 children reached British shores.

It is understood that one rigid-hulled inflatable boat (RHIB) packed with around 20 people has been intercepted by Border Force officers. 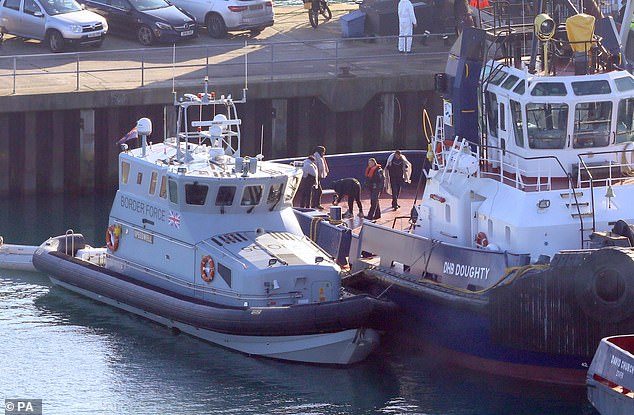 Another RHIB carrying 10 migrants has also been picked up off the Kent coast, while the Border Force cutter Seeker has been launched in the operation.

Meanwhile, a ‘boatload’ of suspected migrants were arrested by police after landing on Mermaid Beach in Folkestone, Kent at around 8.45am. A spokesperson for Kent Police told MailOnline the group had been handed over to the Home Office.

Hundreds have already crossed this year, despite Home Secretary Priti Patel promising a clampdown on crossings just months ago.

Millions of pounds have been pumped into security measures to stop migrants getting into Britain, including drones and coastline patrols. 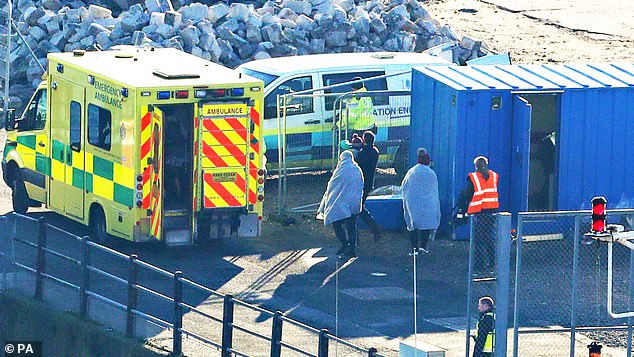 Migrants are pictured being led to an ambulance as they are brought ashore in Dover, Kent, where the Coastguard are responding to a boat crossing the Channel 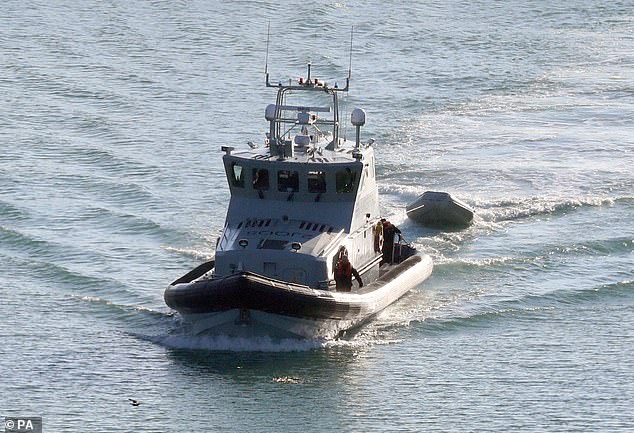 A Border Force boat tows a dingy into Dover harbour, a day after 90 asylum seekers crossed the Dover Strait, one of the world’s busiest shipping lanes, in small eight boats

It comes after 90 asylum seekers yesterday crossed the Dover Strait, one of the world’s busiest shipping lanes, in small eight boats.

That figure, which includes 15 children, is the most for a single day, eclipsing even the 86 who made the perilous journey from France last August.

A Coastguard spokesman told MailOnline: ‘HM Coastguard is coordinating a search and rescue response to a number of incidents off Kent this morning, working with Border Force, Kent Police and other partners.

‘Border Force vessels Searcher, Speedwell have been sent, along with RNLI lifeboats and an HM Coastguard Search and Rescue Helicopter from Lydd.

‘HM Coastguard is only concerned with preservation of life, rescuing those in trouble and bringing them safely back to shore, where they will be handed over to the relevant partner emergency services or authorities.’

Yesterday, a record number of migrants were intercepted by border authorities, including an RHIB carrying five West African men from Senegal, Mali and Guinea.

In another incident off the coast of Kent at 2.15am, 21 men who said they were Syrian, Yemeni, and Egyptian were also picked up on a RHIB.

All 26 migrants were taken to Dover, where they were medically assessed before being taken for questioning by immigration officials.

Later, at around 7.40am, a group of 12 men and women were intercepted by a cutter and said they were of Iranian and Iraqi origin. 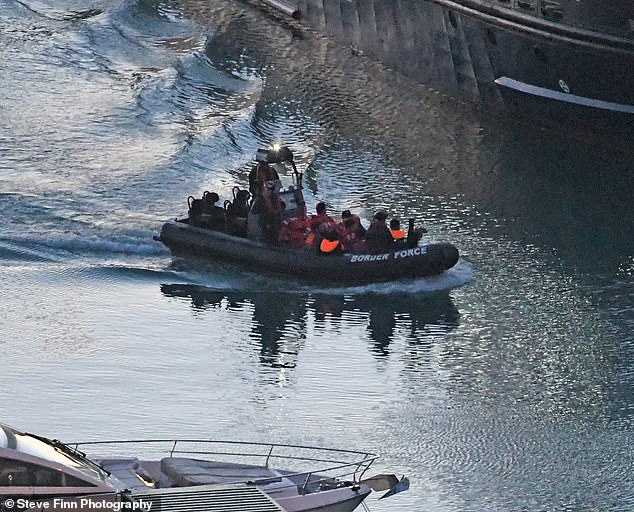 In the fourth incident around the same time, 16 Iraqi and Iranian men were picked up on a boat. An hour later, Border Force officers caught a group of 12 people whose nationalities have not yet been established.

Five more were detained at Shakespeare Beach and Samphire Hoe Beach, Dover, around 9.20am. They said they were Yemeni and Iraqi.

An hour after that, an RNLI lifeboat picked up an inflatable boat carrying 12 men and two women who said they were Iranian and Iraqi.

Finally, five suspected illegal immigrants were detained by police in Dover town centre at around 11.20am.

The Home Office said: ‘All those found, apart from the group detained by Kent Police, were taken to Dover where they were medically assessed before being transferred to immigration officials to be interviewed.

‘A total of 15 people from today’s eight incidents claimed to be minors and, subject to age assessment, will be transferred into the care of social services. The cases of all 90 people found today will be dealt with according to the immigration rules.’ 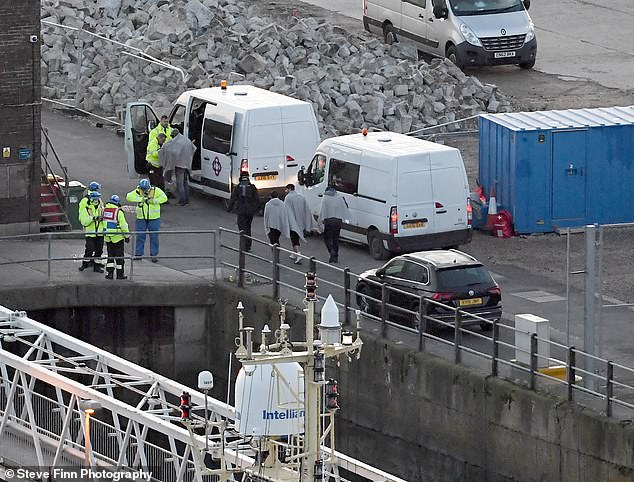 HM Coastguard responded to ‘a number of incidents’ in the English Channel, along with Border Force, Kent Police and other agencies (pictured men with blankets at Dover on Thursday) 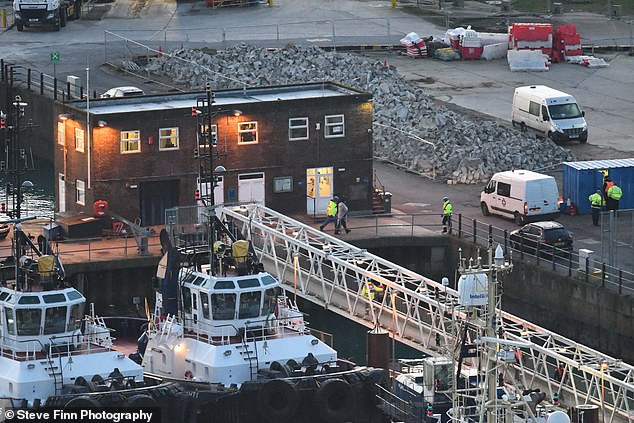 Border Force officers are said to be dealing with around eight inflatable boats, with the first one detected around 5.30am (pictured is the port of Dover on Thursday morning) 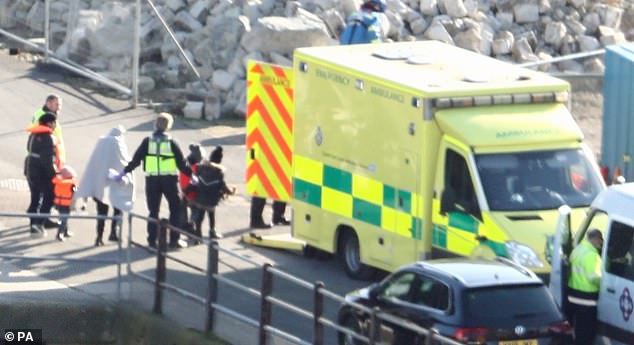 Seen among the arrivals in Dover were several children, with some wearing orange life jackets as they were walked towards an ambulance

Four young children were seen being escorted by immigration officials at the port, including one aged around four or five who was holding hands with an adult.

Another child was seen carrying a doll after making it ashore.

A bearded migrant using a crutch and wearing a hoodie, jeans and waterproof jacket was pictured with a Coastguard worker. 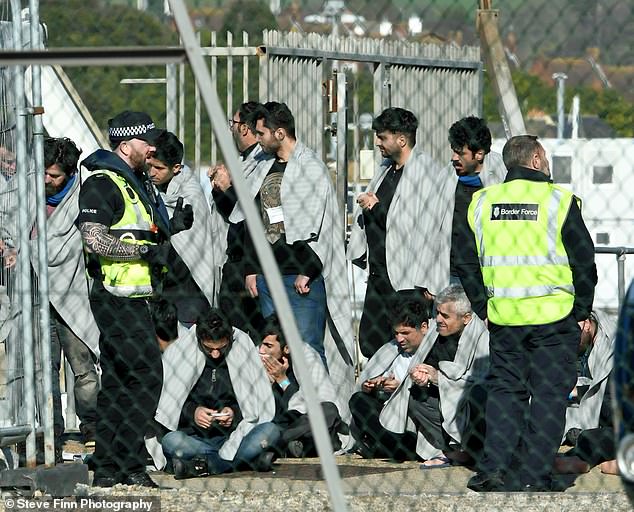 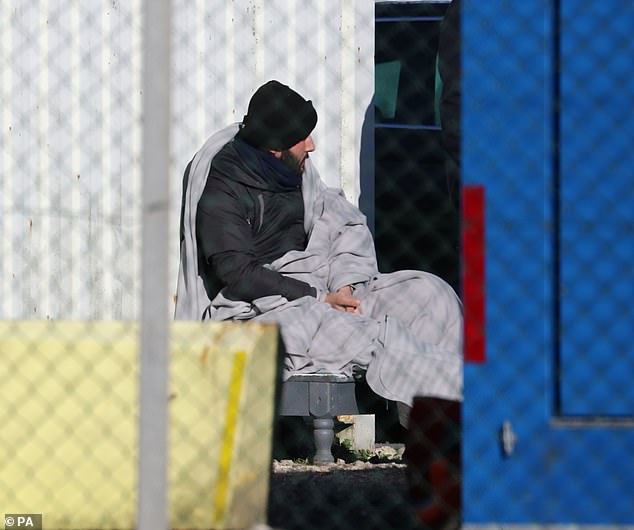 It is thought that 90 migrants arrived in Kent yesterday, with one cutter believed to have carried around 28 people (pictured is one man wrapped in a blanket in Dover)

Natalie Elphicke, MP for Dover and Deal, insists more must be done after the latest crossings – which happened less than a week after Brexit Day.

She said: ‘It is essential that we put a stop to this appalling trafficking trade and protect vulnerable people from making these dangerous crossings.

‘A fresh approach is needed, so wherever boats are picked up in the English Channel they are returned safely and securely to France. We already have territorial agreements for border controls and these should be extended. It’s in France’s interest too – because they don’t want Calais to become a migrant magnet again.’ 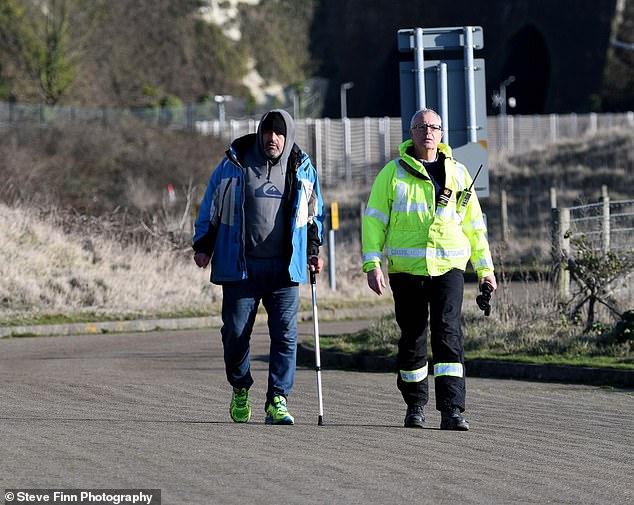 Another man, thought to be a migrant, was seen using a walking stick (pictured) as he was escorted by an official in high-vis yesterday 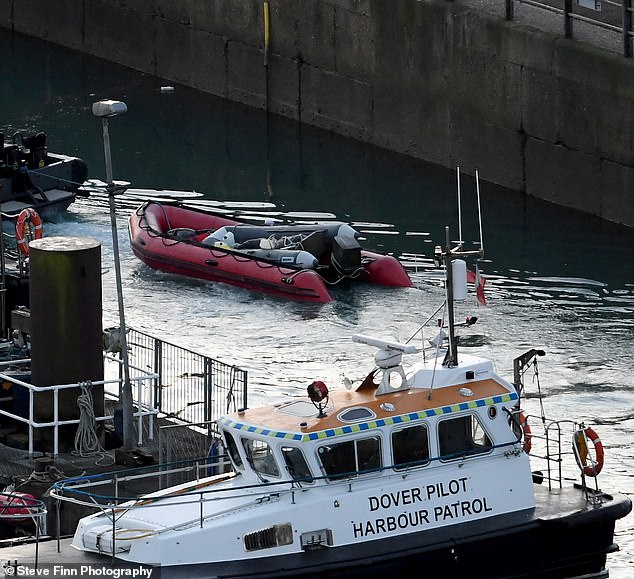 Tony Eastaugh, the Home Office’s director for crime and enforcement, said: ‘We are tackling illegal migrant crossings on all fronts with every agency including Border Force, Immigration Enforcement, NCA (National Crime Agency) and policing teams working in tandem with the French and Belgian authorities.

‘We have extra patrols on French beaches, drones, specialist vehicles and detection equipment which have been deployed to stop small boats leaving European shores.’

Since January 2019, more than 135 migrants who entered the UK illegally via small boats have been returned to mainland Europe. 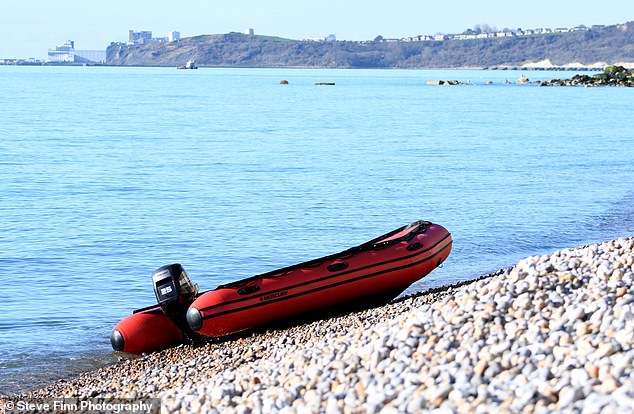 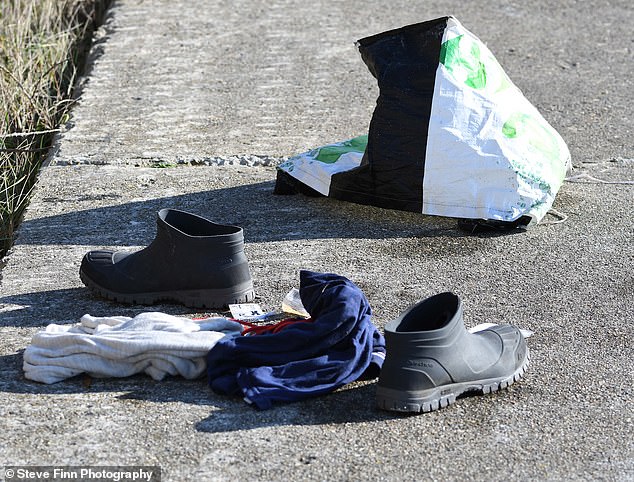 It comes after nearly 200 migrants risked their lives to try and cross the English Channel in just one week last January.

At least 180 migrants tried to cross from the continent to Britain between January 20 and January 26, according to figures from UK and French authorities, despite repeated official warnings about the dangers of making the trip in small boats.

More crossings over January 25 and 26 brought the total number of migrants picked up by Border Force and brought to the UK in seven days to at least 94.

On Saturday January 25, a Border Force vessel was alerted about 5.30am to a boat entering UK waters which was carrying a group of 26 males and two females who have presented themselves as Pakistani, Afghan, Iraqi, Iranian, and Syrian nationals.

Officers helped some of the migrants get medical care after they arrived in Dover, Kent 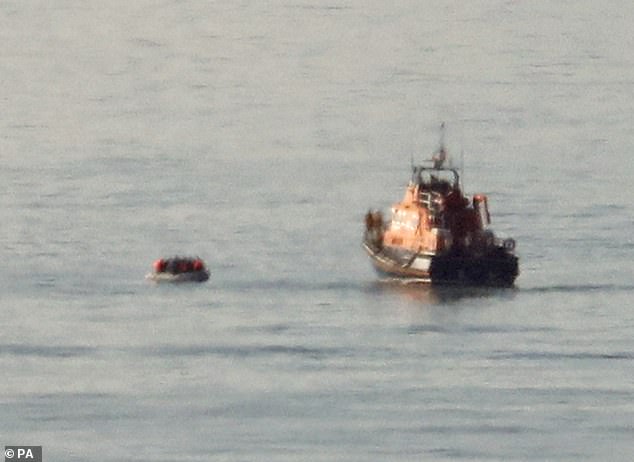 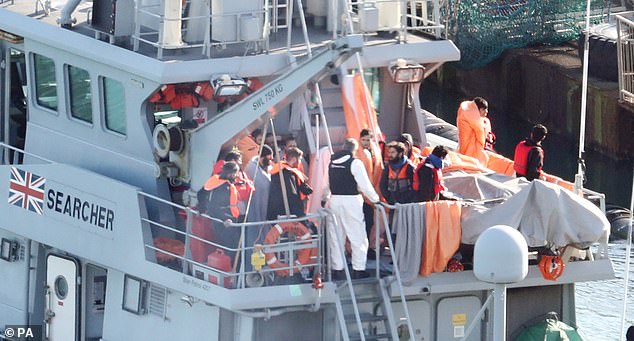 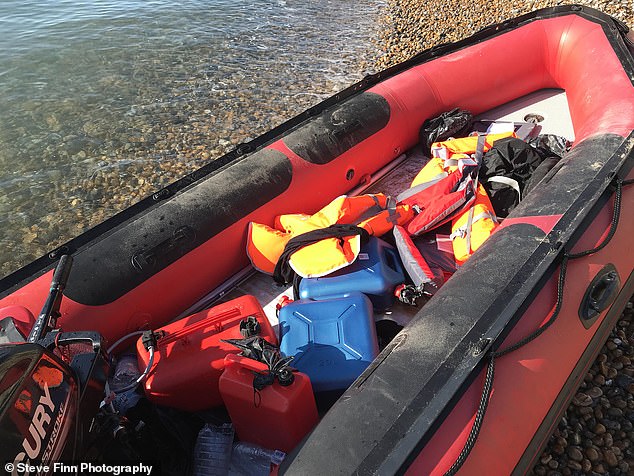 The group was taken to Dover in Kent, where they were to be medically assessed, before being interviewed by immigration officials.

The English Channel is the world’s busiest shipping lane, with 500-600 ships passing through the narrow strait every day.

Last August saw a record 86 migrants arrive in one day – during a year in which around 1,900 asylum seekers reach Britain.

On New Year’s Day, it was revealed that 1,900 migrants reached UK soil after crossing the Channel during the year.

However, more than 2,300 were blocked in the Channel as they tried to get to Britain illegally in 231 small boats laid on by people smugglers. 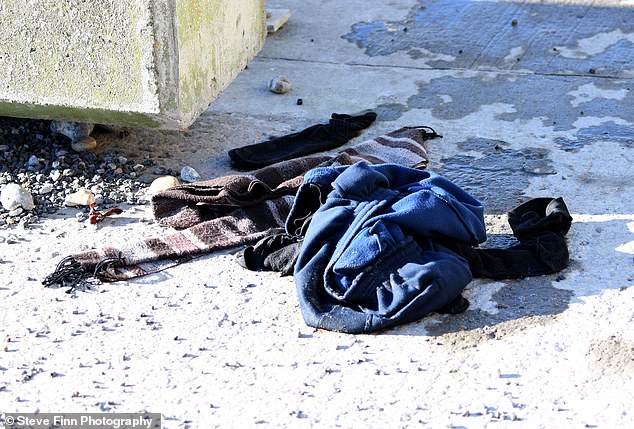 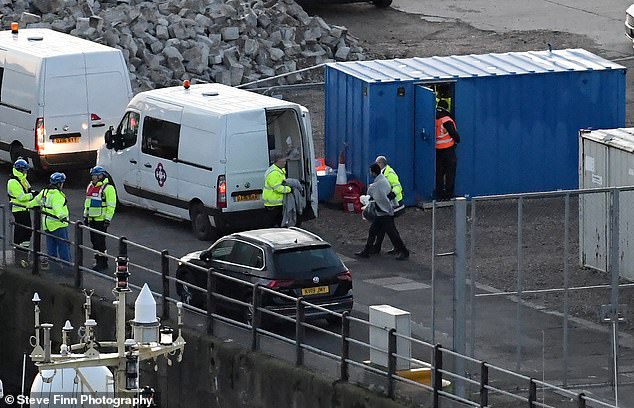 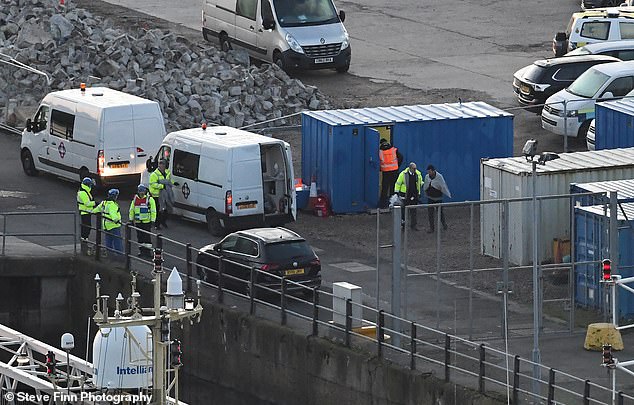 The English Channel is the world’s busiest shipping lane, with 500 to 600 ships passing through every day (pictured is a lifeboat approaching a small craft) 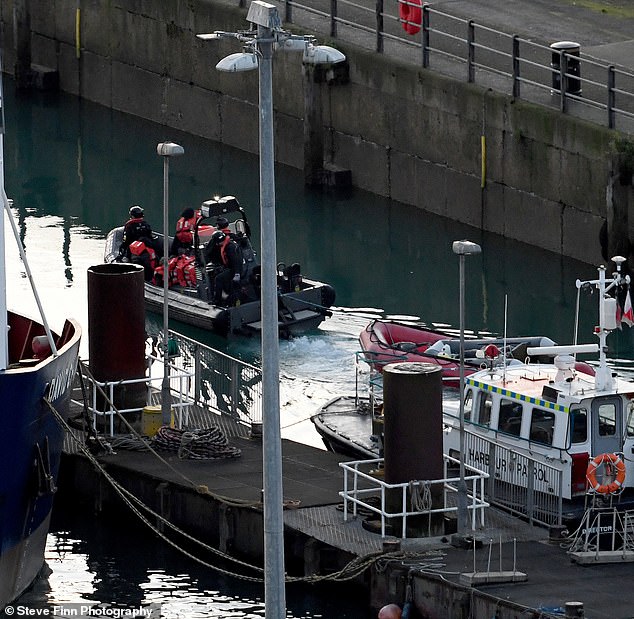