Washington: No one should be surprised if Russia spreads disinformation about commitments that have not been made after talks with the United States, or if it instigates something as a pretext for more destabilization in Ukraine, State Department spokesperson Ned Price said on Wednesday.

“We urge everyone not to fall for Moscow’s continuing disinformation,” Price told reporters, adding the US is comparing notes with its allies to figure out how best to continue dialogue with Moscow regarding Ukraine. 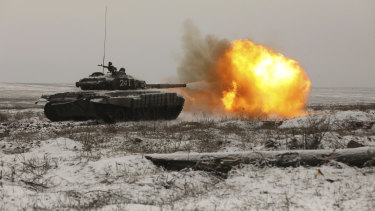 A Russian tank T-72B3 fires as troops take part in drills at the Kadamovskiy firing range in the Rostov region in southern Russia. Credit:AP

The warning came as the US and NATO rejected key Russian security demands for easing tensions over Ukraine.

But the US and NATO left open the possibility of future talks with Moscow on arms control, missile deployments and ways to prevent military incidents between Russia and the West.

The decisions came at a meeting of the NATO-Russia Council on Thursday AEST, the first of its kind in over two years. That Russia’s delegation did not walk out of the talks and remained open to the prospect of future discussions after having its main positions rebuffed were seen as positive notes in a week of high-level meetings aimed at staving off a feared Russian invasion of Ukraine.

Russian President Vladimir Putin wants NATO to withdraw its troops and military equipment from countries that border Russia, which include Ukraine but also NATO allies like Estonia, Latvia and Lithuania. Putin also asked for the 30-nation military alliance to agree not to admit any more members. 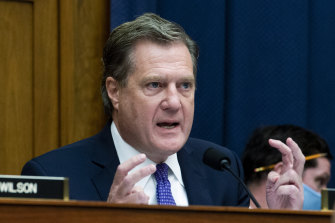 Representative Mike Turner believes the US should send more aid to Ukraine.Credit:AP

Separately, the new top Republican on the House Intelligence Committee called on President Joe Biden’s administration to ramp up military and intelligence support for Ukraine.

“I believe that the administration should be actively arming Ukraine so it can defend itself,” Representative Mike Turner of Ohio said in an interview. “They want to defend themselves. They should be given every opportunity to do so.”

Washington has committed more than $US2 billion in military aid to Ukraine since 2014, when Russia seized Crimea and backed an insurgency in the eastern region known as Donbas. In December, Congress increased security assistance to Ukraine to $US300 million for 2022, with at least $US75 million specifically designated for weapons.

Turner’s call for more forceful US action abroad puts him at odds with some Republicans who take a more isolationist approach. In a widely shared November interview, Turner argued with Fox News host Tucker Carlson after Carlson questioned why the US should help Ukraine and suggested troops instead be sent to the US-Mexico border to stop immigrants entering the country illegally. 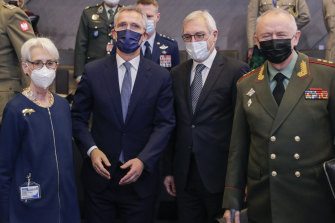 “Apparently you need a little education on Ukraine,” Turner told the host.

On Wednesday, Turner said he wants the committee to do more to inform Americans about what he called “near-peer adversaries” like China and Russia.

“One of the reasons why Russia might go into Ukraine is because they see the United States as weak,” he said.