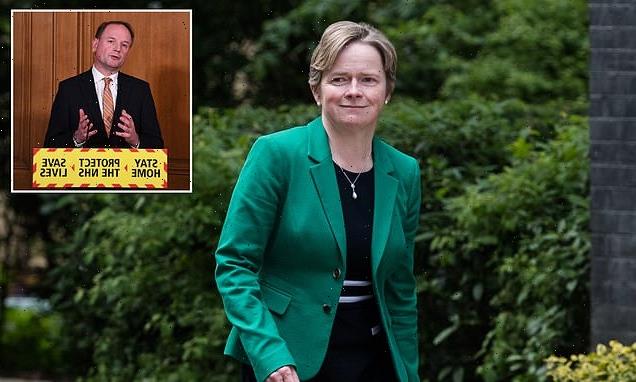 Baroness Dido Harding today confirmed she is ‘thinking about’ applying to run the NHS in England.

The Tory peer said she is considering applying for the crucial post, saying her work with the health service had been the ‘privilege of my life’.

The comments, on BBC Radio 4’s Woman’s Hour, come amid claims she has already sounded out senior figures about replacing Sir Simon Stevens, who is stepping down next month and becoming a peer himself.

But Lady Harding’s application is likely to prove controversial after her time in charge of Test and Trace, which ended earlier this year.

In March the former head of the Treasury branded NHS Test and Trace the ‘most wasteful and inept public spending programme of all time’.

Last year Boris Johnson faced calls to sack Lady Harding and replace her over  the continued poor performance of what was meant to be a ‘world-beating’ system under her management.

Asked repeatedly about her intentions in an interview this morning, Lady Harding said: ‘I haven’t applied for the NHS job yet,. I’m thinking about what I want to do with my life…

‘It means I am thinking about it. I have loved working in the NHS for the last three and a half years. It’s been the privilege of my life to work alongside our NHS people.’

Lady Harding said she had only just returned from holiday. ‘It is literally the first day back at school for me,’ she added. 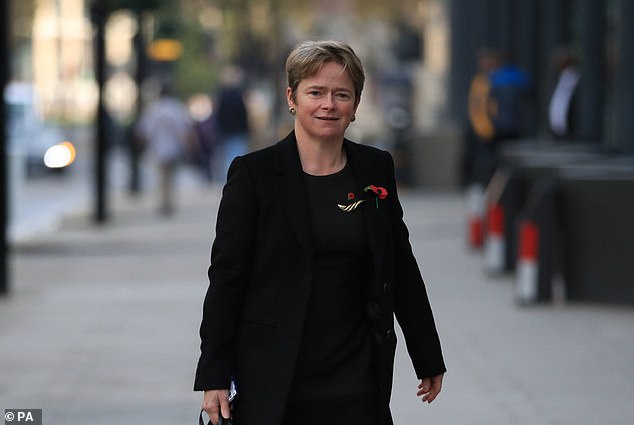 Baroness Dido Harding is said to be considering putting herself forward to run the health service in England. 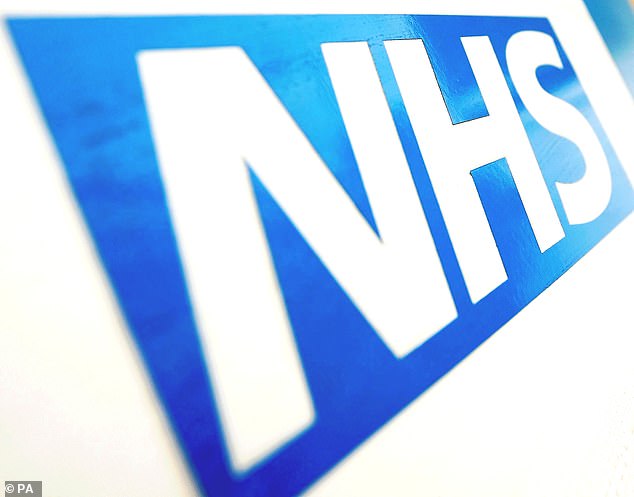 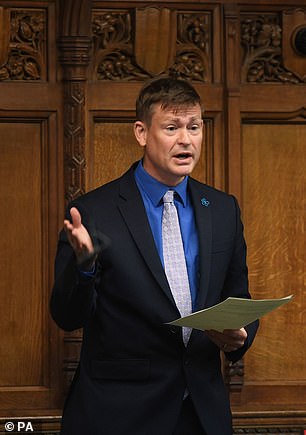 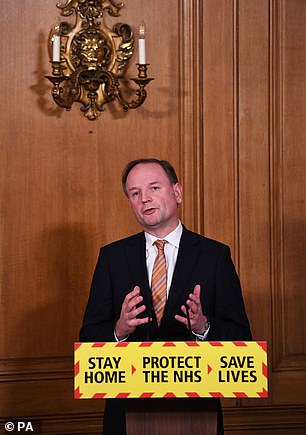 A report earlier this year said T&T had ”minimal impact on transmission’ despite receiving £37billion of funding.

The Commons Public Accounts Committee said in March there was no evidence the tracing scheme had made a dent in Covid transmission, despite its ‘unimaginable’ budget.

Last year No10 spent £22bn on Test and Trace and the Chancellor promised to throw another £15bn at it in 2021, bringing the total cost to £37bn.

The PAC report said the Government was treating British taxpayers ‘like an ATM machine’.

Sir Nicholas Macpherson, a member of the House of Lords and former permanent secretary at the Treasury, also waded into the row. He posted a cutting tweet that added: ‘The extraordinary thing is that nobody in the government seems surprised or shocked. No matter: the BoE will just print more money.’

At one point in October last year, ahead of the second lockdown which came in in November, the system hit a record low with just 59.6 per cent of the contacts of people who tested positive for the disease being successfully contacted and told to self-isolate.

Sir Bernard, who chairs the Liaison Committee of senior MPs which questions the Prime Minister twice a year, said the peer should be given a ‘well-earned break’ so she and others could ‘reflect on the lessons learned so far’.

Last September she was ridiculed when she claimed nobody was ‘expecting’ to see the ‘really sizeable increase in demand’ for Covid checks ahead of the start of the school year.

Baroness Harding’s comments, which come despite the return of schools and more people heading back to work, sparked outrage as she told MPs ‘none of the modelling’ had suggested there would be such a steep uptick in requests.

The head of the NHS Test and Trace programme blamed the Government’s Scientific Advisory Group for Emergencies (SAGE) for seemingly getting its predictions wrong as she said testing capacity had been built based on the panel’s recommendations.

There were also numerous reports of staff at deserted walk-in testing centres turning people away if they didn’t have an appointment or weren’t showing obvious coronavirus symptoms.

Baroness Dido Harding of Winscombe, 53, was raised on a Somerset pig farm and is the granddaughter of Field Marshall Lord Harding, the commander of the Desert Rats who became the most senior soldier in the British army.

A former jockey, she studied Policy, Politics and Economics at Oxford University, alongside David Cameron, and is the wife of John Penrose, the Conservative MP for Weston-super-Mare.

Upon graduating, she held a slew of roles at Thomas Cook, Woolworths, Tesco and Sainsbury’s.

Baroness Harding was appointed CEO of TalkTalk in 2010, serving in the role for seven years, during which the company was the victim of a cyber attack that saw the personal and banking details of 157,000 customers accessed by hackers. 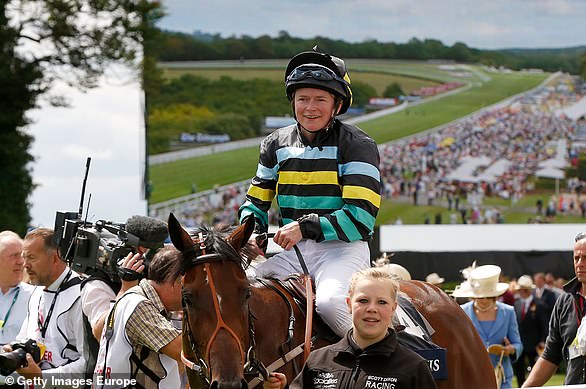 Baroness Harding is a former jockey, though she quit racing after hitting 40 and promising her husband she’d stop 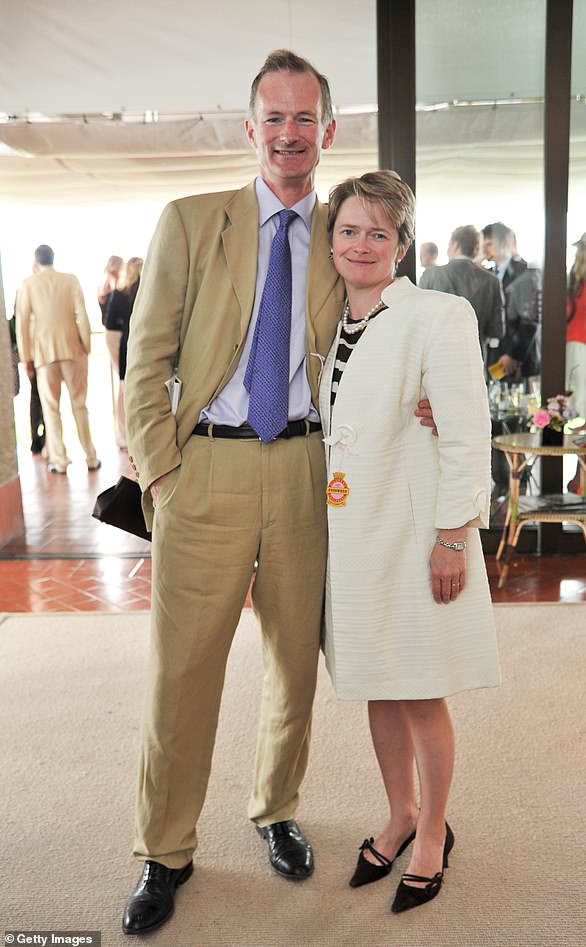 She studied Policy, Politics and Economics at Oxford University, alongside David Cameron, and is married to John Penrose, Conservative MP for Weston-super-Mare

She was subjected to repeated blackmail attempts after the hack, with demands for Bitcoins in exchange for stolen data, which included customers’ names, email addresses, mobile numbers, home addresses and dates of birth.

In the aftermath, TalkTalk was fined a record £400,000 for security failings which allowed the data to be accessed ‘with ease’ in one of the biggest data breaches in history.

TalkTalk is thought to have lost £60million from the fallout with an estimated 100,000 angry customers leaving, mainly to BT, while 2015 profits halved to £14million and shares lost nearly two-thirds of their value.

Baroness Harding faced repeated calls to step down over the breach, but stayed on until 2017, when she resigned to focus on her ‘public service activities’.

Later that year, she was appointed chair of NHS Improvement, responsible for overseeing all NHS hospitals.

She refuses to believe her gender has ever held her back, nor will she endorse female quotas on company boards, which she sees as political meddling.

She also thinks that workers have too much maternity leave, despite admitting being the boss has allowed her to successfully juggle her own career with spending time with the two daughters she has with her husband.

She said in a 2015 interview: ‘I have an enormously privileged position.

‘I make a lot of money – a matter of public record – I have a huge amount of help, and I’m more in control of the day and what I do than someone working shifts on the checkout, or running the produce department in a supermarket.’

Baroness Harding has also packed in a career as a jockey, which saw her appear at Cheltenham, Ascot and even the towering Grand National jumps at Aintree.

One particularly nasty crash over the sticks at Larkhill left her strapped to a spinal board – though she still managed to catch a flight to a conference in Thailand the next day.

When the date came Penrose, who had not forgotten, made it clear breaching the bargain was a deal-breaker for the marriage.

Harding obliged, though does still race without jumps.

‘I miss the racing hugely,’ she previously admitted. ‘If you told me I could go off and do it tomorrow afternoon I would. For me that’s always been my way of shutting everything off and relaxing.’