Five teenagers who died in a horrific car crash south-west of Sydney on Tuesday night were all aged between 14 and 16 and attended the same high school, police said, as the tight-knit town of Buxton reels from yet another disaster.

Emergency services were called to the intersection of Orange Road and East Parade, Buxton, just before 8pm after reports that a Nissan Navara utility had crashed into a tree.

The five passengers in the car died at the scene. They all attended Picton High School, Superintendent Paul Fuller said, and some of their families learned of the crash through social media.

The driver, an 18-year-old green P-plater, suffered non-life threatening injuries. He was taken to Liverpool Hospital for mandatory testing. Fuller said alcohol was not believed to be a factor in the crash.

Fuller described the collision as one of the worst accidents he had attended in 38 years of service.

Wollondilly Shire mayor Matt Gould described the incident as “heartbreaking and devastating”, and said the families of the victims had the full support of their community.

The crash occurred just 500 metres from where two firefighters died in the Black Summer bushfires when a tree fell on their fire truck.

“I don’t even really have the words to describe how big a loss this is,” he said.

“Buxton has had more than its fair share of tragedy in the last few years. It was very, very heavily impacted by the bushfires and then where this accident took place is very, very close to where we had two firefighters losing life down there during those fires.”

“It’s just really, really horrible. I’m sort of struggling to process it myself at this point.”

Police have launched an investigation into the crash to try and determine why six people were travelling inside the vehicle at the time of the crash. 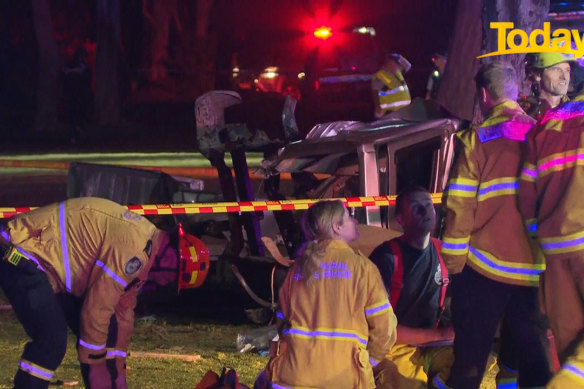 Five teenagers were killed after a crash in Buxton about 100km south-west of Sydney.Credit:Today

“Despite the best efforts by the firefighters, there wasn’t much anyone could do,” he said.

Dewberry said a number of the emergency services responders would have known the victims due to the tight-knit nature of Buxton.

Police have contacted the principal and counselling will be provided to students when they arrive for classes on Wednesday.