The Department of Justice has decided to close the high-profile civil rights investigation into the killing of Tamir Rice, without bringing any charges, according to sources familiar with the situation.

Rice, 12, who was Black, was carrying a pellet gun when he was shot by a White Cleveland Police officer in 2014.

In this Dec. 1, 2014 photo, Tomiko Shine holds up a picture of Tamir Rice, the 12 year old boy fatally shot by a rookie police officer in Cleveland, Ohio, on Nov. 22, during a protest in Washington, D.C.
(AP Photo/Jose Luis Magana, File)

The DOJ is set to announce Tuesday that career prosecutors reviewing the federal investigation into the fatal shooting of Tamir Rice found insufficient evidence to support federal criminal charges against the Cleveland Police officers involved in the incident.

The child had been seen throughout the day at the Cudell Park Recreation Center, waving the weapon around and allegedly pointing it at more than one person, according to the DOJ. 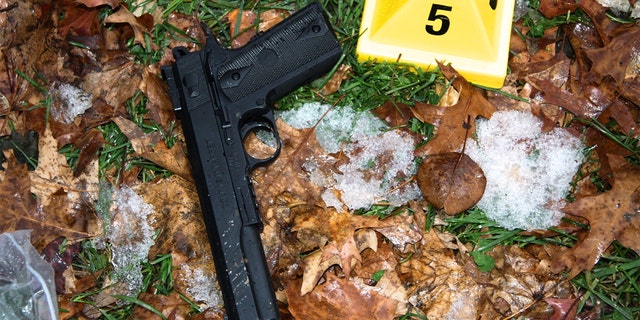 Eventually, someone called 911 to report a "guy with a pistol" pointing it at people visiting the playground, according to the DOJ. But the caller also described the person with the gun as "probably a juvenile" and said that the object in his hand was "probably fake."

Although he was just 12, Tamir was 5 feet, 7 inches tall and weighed 195 pounds, authorities said.

The dispatcher sent out a high-priority call, but responding officers were not told about the callers’ reservations about Tamir’s likely age and that the gun may have been a toy, according to investigators.

"The officers believed that they were responding to a playground where a grown man was brandishing a real gun at individuals, presumably including children," the DOJ said.

Two officers arrived, and, according to statements they gave to investigators, ordered Tamir to show his hands. They both said that they believed he was reaching for a gun before one of them, Officer Timothy Loehmann, opened fire.

Moments after getting out of the car, the boy had been shot. Grainy video shows him drop a black object as he falls, which investigators said was the airsoft gun.

The DOJ said it informed Tamir’s family of its decision on Monday, ahead of the announcement.

In order to convict Loehmann of a federal civil rights violation, prosecutors would have had to provve that he acted both unreasonably and willfully, the DOJ said.

Due to a lack of evidence, investigators said they could not do so.

Video evidence was inconclusive, there were only two witnesses, who investigators said were more than 300 feet away and "shed little light on Tamir's actions," and expert analysis also did little to help.