It wasn’t until almost four decades after its release that Neil Diamond finally revealed the inspiration for his 1969 hit song Sweet Caroline. Or at least he seemed to.

In 2007 Diamond appeared via satellite to perform at the 50th birthday party of Caroline Kennedy, the only surviving child of one of America’s most beloved political couples, Jacqueline and John F. Kennedy. He used the occasion to announce that Kennedy was the Caroline he was referring to in the song. 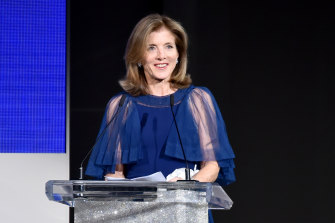 Caroline Kennedy has been nominated as US Ambassador to Australia. Credit:Getty

Diamond later said he was inspired to write the song after seeing a picture of Kennedy as a young girl next to a riding horse. “It was such an innocent, wonderful picture, I immediately felt there was a song in there,” he said, a claim that raised some eyebrows given the song’s sexualised lyrics.

Diamond would later say that, in fact, the song was written about his wife. He said that at the time he couldn’t think of any lyrics to rhyme with Marsha and believed a three-syllable name would work better in the song.

While the precise origins of Sweet Caroline may always remain a mystery, US President Joe Biden on Thursday ended another. After months of speculation he announced Caroline Kennedy as his nominee to be the US ambassador to Australia. Well-sourced rumours first emerged in May that Biden wanted to appoint Kennedy, but official confirmation of the decision took much longer than expected. 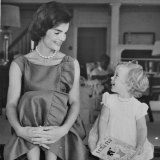 Caroline Kennedy with her mother Jacqueline in 1960.Credit:UPI

If confirmed by the Democrat-controlled Senate, as is expected, Kennedy will be the first woman to head the US embassy in Canberra. As a member of one of America’s most storied political dynasties, Kennedy would bring an unprecedented level of gravitas and glamour to the role.

According to Joe Hockey, Australia’s former ambassador to Washington: “It says so much about the strong relationship between the US and Australia that President Biden is sending someone from Democratic Party royalty to represent him in Australia.”

A posting to Canberra would be the latest chapter in a life that has been marked by both immense privilege and tragedy.

Kennedy was born in 1957, three years before her father was elected president, and spent some of her most formative years in the White House. Aged five she appeared on the cover of LIFE magazine riding Macaroni, a gelding presented to her as a gift by vice-president Lyndon Johnson. 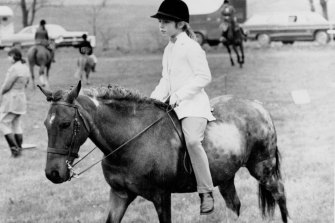 Just a year later the idyllic image of family life cultivated by the Kennedys was shattered when JFK was assassinated in a Texas motorcade. At her father’s funeral, the young girl was pictured holding her mother’s hand they knelt before the coffin. Five years later, Bobby Kennedy, Caroline’s uncle, was assassinated while campaigning for the Democratic Party’s presidential nomination.

After studying at exclusive private schools in New York and Massachusetts, Kennedy worked as an intern at The New York Daily News and in the office of her uncle, the Democratic Senator Ted Kennedy. A graduate of Radcliffe College at Harvard University, Kennedy worked as a research assistant at New York’s Metropolitan Museum of Art. It was there she met her husband, designer and artist Edwin Schlossberg.

In 1999 tragedy struck again when Kennedy’s brother John jnr died in a plane crash at age 38. 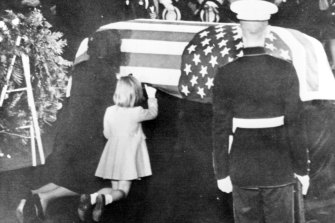 Caroline Kennedy kneels next to her mother as Jaqueline kisses the casket for her husband John F Kennedy.Credit:AP

While closely guarding her privacy, Kennedy has sought to protect the Kennedy legacy by publishing several books of family history and serving as honorary president of her father’s presidential library and museum. She has avoided the scandals that have marred other family members including cousin Robert F. Kennedy jnr, who has become one of America’s most famous anti-vaccine advocates.

Over time, she took an increasingly active role in politics by speaking at the Democratic National Convention in 2000 and then by endorsing Barack Obama’s bid to become the party’s presidential nominee. In late 2008 she expressed interest in filling the New York Senate seat left vacant by Hillary Clinton but dropped out of the contest. 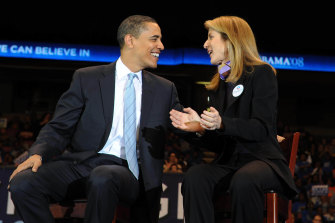 Then senator Barack Obama talks to Caroline Kennedy at a rally in Meadowlands, New Jersey, in 2008.Credit:Getty Images

In 2013, Obama appointed Kennedy as US ambassador to Japan, a somewhat controversial pick at the time because of her lack of foreign policy experience. In an editorial describing her credentials as “dubious”, The Los Angeles Times said: “She is not an expert on Japan or international relations, and she has never held public office or been a diplomat.”

But at the end of her three-year posting the East-West Centre, a US think tank, said she had achieved “massive popularity with Japanese citizens and played an important role in boosting US-Japan ties”.

In February 2020, Kennedy, now a board member at Boeing, again chose wisely by endorsing Biden as the Democratic Party’s nominee. At the time, he was struggling to gain support with the party base.

Describing a meeting with then vice-president Biden in Japan, Kennedy wrote in The Boston Globe: “He radiated American optimism and generosity of spirit. He made clear that America would always stand by our allies, and that we were committed to keeping the region peaceful and prosperous. He delivered tough messages as well, but he did it in private, with skill and respect.”

Hockey, who met Kennedy during his time as US ambassador, describes her is a “highly impressive individual”, adding that her close ties to Biden would serve the US-Australia alliance well.

“She has a direct line to the President and this is essential for her to be successful,” he says.