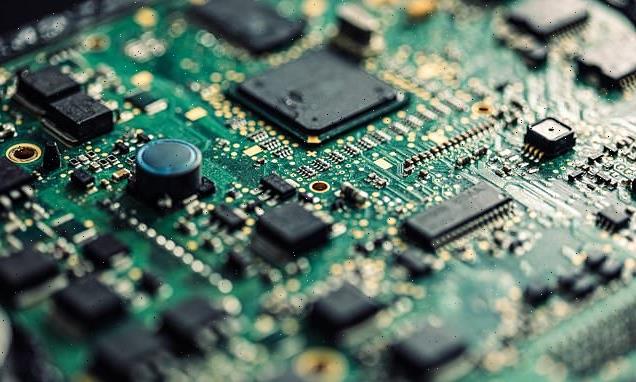 Businesses are struggling to get back to the office due to a mass shortage of microchips.

Firms are desperately trying to source electronic equipment but face having to wait up until December.

Electronic markers are also reporting prices for chips rocketing by up to 600 per cent.

It comes as the shortage is threatening to shut down swathes of the car industry across the world.

Toyota, Ford, Volkswagen and Stellantis indicated they were poised to slash production due to a lack of the vital components.

Many were forced to close shop in the depths of the pandemic and since reopening they have had to battle electronics makers for supplies of the chips.

Microchips are are used in everything from vehicles to smartphones and home appliances. 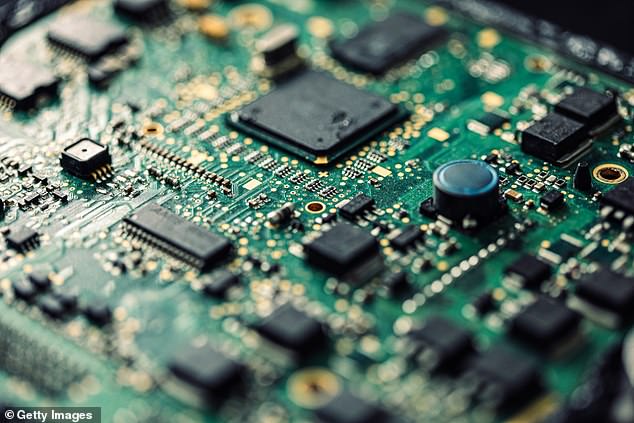 What are the reasons for the global shortage in microchips?

As the coronavirus pandemic erupted in early 2020, chip factories started shutting down, particularly in Asia, where much of global semiconductor production is based.

By the time they started to reopen, there was big a backlog of orders to fill.

Car factories around the world are shutting assembly lines because of the chip shortages, which in some cases have been exacerbated by the former Trump administration’s actions against Chinese chip companies.

Taiwan, home to tech firms such as Taiwan Semiconductor Manufacturing Co Ltd (TSMC), the world’s largest contract chip maker, has become front and centre of efforts to resolve the shortage.

But Trump punished the industry due to its links to Huawei.

President Biden’s team has now sought to solve the crisis, holding a closed-door event, joined by the Taiwan minister and what she described as ‘very senior U.S. officials’.

It was the first announced high-level exchange between Taiwan and the Biden administration, and is believed to have centred on chips.

Making semiconductors is a hugely water intensive process throughout the manufacturing process, from cleaning the chips themselves, keeping state of the art foundries hyper-sterile and washing away waste chemicals.

The company is among chipmakers who have started trucking in water to its foundries and has played down concerns that the drought will further hit production.

‘TSMC has always maintained contingency plans for each stage of water restrictions… So far there’s no impact on production,’ it said in a statement.

A fire at a factory in Japan and storms in Texas also hit global production.

‘We’ve gone through 18 months where our customers haven’t been doing any projects with us.

‘Now they’re starting to want to set their offices up for the return to work and they’re coming to us and they’re wanting to buy the equipment.

‘But we can’t source it, some of the stuff we’re quoting for we’re looking at December before we can get hold of the network equipment that people need to be able to connect and get their offices open.

‘They’re coming to us and saying they’ve signed a lease for a landlord and we want to be in in six weeks.’

Steve Coburn, MD of IT company Project Five, added: ‘It does have financial effects on us.

‘It’s not just the lead times, the other problem is that hard to find components prices have gone up by 600 per cent in some cases.

‘We talk a lot to our suppliers and colleagues in other companies in the some industry and people who have long careers in the industry are saying this is the worst situation they have ever known.’

The car industry is also under the cosh, with the shortage threatening to shut down swathes of the sector.

Toyota, Ford, Volkswagen and Stellantis indicated they were poised to slash production due to a lack of the vital components.

Many were forced to close shop in the depths of the pandemic and since reopening they have had to battle electronics makers for supplies of the chips.

The latest snarl-up comes as Covid surges in parts of Asia where large numbers of chips are made, including Japan, the Philippines, Thailand, Vietnam and Malaysia.

Japan’s Toyota, which had previously managed to avoid shutdowns by stockpiling chips, said it would be forced to slash production globally by 40 per cent in September.

The firm owns a plant in Deeside, North Wales, although it did not specify whether that would be affected.

Germany’s Volkswagen said it could not rule out further changes to production, due to ‘volatile’ chip supplies.

Meanwhile Citroen and Fiat owner Stellantis said it would halt or cut production at two plants in France.

US giant Ford had also said earlier this week that it would halt production of its best-selling F-150 pickup truck in Kansas City.

In some cases, the ongoing disruption has forced car companies to divert components to their most profitable models. Bosses warned that more disruption is expected. 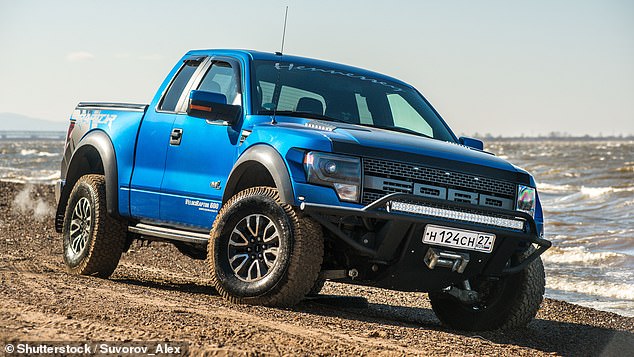 The world is suffering from a significant shortage of semiconductors, the chips used in almost every technology nowadays, from laptops to televisions and video games consoles.

Major automotive giants have had to scale back production, while Samsung has cancelled its Galaxy Note 21 model, and Apple supplier Foxconn warns that parts will be delayed until next year.

New analysis from investment firm PIMCO suggests that while the shortage will be somewhat alleviated soon, demand for semiconductors will continue to grow as it finds use in new ways. But how did we arrive at this position and what will be its long-term consequences? 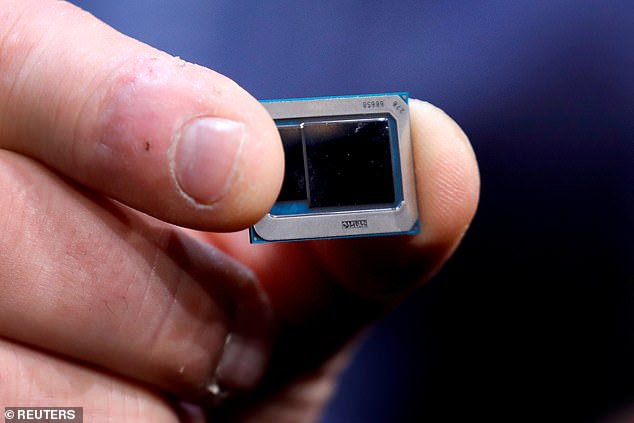 There are a kaleidoscope of factors negatively affecting chip manufacturing at the moment, but PIMCO’s Geraldine Sundstrom suggests two main reasons: US-China trade tensions and supply disruptions caused by the coronavirus pandemic

What are the causes of the shortage?

There are a kaleidoscope of factors negatively affecting chip manufacturing at the moment, but PIMCO’s Geraldine Sundstrom suggests two main reasons: US-China trade tensions and supply disruptions caused by the coronavirus pandemic.

Then the pandemic started. Orders for electronic goods such as PCs climbed, but chips for cars declined and semiconductor makers switched away from industrial chips. When car companies saw orders pick up again, they were hit with a shortage.

On top of this have been natural disasters: the February Texas storm, which shut down the state’s computer-chip facilities, and a magnitude 7.3 earthquake in Japan that halted operations at factories run by chipmaker Renesas. All have combined to make this shortage potentially the worst the electronics industry has ever witnessed.

What has been the effect on manufacturers?

In February, analytics firm IHS Markit observed that lead times – the length between receiving and fulfilling orders – for three-quarters of semiconductor parts had risen while 18 per cent had seen their increase by five to ten weeks.

It noted that the car sector had been especially impacted by shortages. Volkswagen halted production of Audi and VW brands in Europe, China and North America, and General Motors stopped building its Chevrolet Malibu and Equinox models.

Toyota and Honda are two other firms to have been affected, and IHS Markit estimates that the shortage will cost the industry $60billion in lost sales this year.

Meanwhile, chip manufacturers have been struggling to ramp up production. The world’s biggest semiconductor maker – Taiwanese firm TSMC – is putting $100billion towards expansion, but their factories require a lot of water, and Taiwan is currently experiencing a major drought.

Sundstrom says PIMCO have noticed the scarcity is having inflationary effects among prices for IT hardware and – for the first time in decades – Chinese home appliance manufacturers.

‘This also partly reflects insufficient supply of raw materials, such as substrates or wafers. The macroeconomic implication is that supply shortages could boost prices and shrink retail sales and margins for semiconductor-intensive devices,’ she remarks.

However, she does not anticipate rising chip costs for automotive firms to have a massive effect on inflation because even a 10 per cent rise in car chip prices would result in only a 0.2 per cent jump in production costs.

One source of inflationary pressure is coming from Bitcoin. The virtual currency’s creators – known as miners – are buying a lot of computers and high-end chips, adding to worries about paucity and price rises.

How long with this last, and what effects will it have?

Sundstrom says that though she expects the shortfall to ‘ease somewhat’ towards the latter half of 2021, particularly for car companies, high sales of semiconductors will endure.

For the longer term, she forecasts a ‘semiconductor supercycle’ – a long period of solid demand above its long-term price trend – where there are considerable orders for the chips for use in both old and new technologies.

Asian countries with a strong semiconductor industry like Taiwan and South Korea will benefit for the next three to five years, she says, as well as chip equipment makers and market leaders that can bargain well for chips.

Hargreaves Lansdown’s Laura Hoy points to suppliers Nvidia, Applied Materials and Intel as potential beneficiaries from an increase in chip prices and the broader changes affecting the world economy.

She states: ‘The shift toward remote working, rollout of 5G and electric vehicle production will continue to support demand while suppliers are bogged down by the ongoing tension between the US and China. That’s likely to increase chip prices and shrink margins for everyone using them.

‘As for chip users, larger, more established companies like Apple are at an advantage as they have the clout to negotiate better prices and secure chip deliveries. It’s bad news for smaller players, like the wave of new EV companies, who will see their already thin, and often non-existent, margins deteriorate further.’