Dakar, Senegal: Gunmen killed at least six people at a Catholic church in the West African nation of Burkina Faso on Sunday and then torched the worship space, town officials told local reporters. 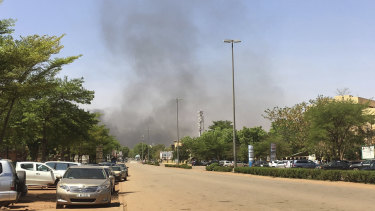 Smoke can be seen rising in the distance from an Islamic extremist attack in 2018.Credit:AP

The attack during morning Mass occurred in the country's restive north, where militants linked to the Islamic State and al-Qaeda have recently gained ground.

A priest was among those killed.

Militants also set ablaze nearby shops and a medical clinic, according to the BBC.

It was the second attack on a church in five weeks in Burkina Faso, where Islamist extremist violence has quadrupled over the past two years. Four worshippers and a pastor died in an attack on a Protestant congregation in late April.

The once-peaceful nation, known regionally for its parks and a biennial African film festival, has become a home base for Islamist extremists, who have tried lately to generate income from kidnapping tourists near the borders.

Islamic State leader Abu Bakr al-Baghdadi mentioned Burkina Faso earlier this month in a video that broke a five-year silence. He praised militant groups in the nation for pledging allegiance to the Islamic State, and asserted they would take "revenge for their brothers in Iraq and Syria."

Burkina Faso's descent into chaos began in 2016, when militants – many armed with leftover weapons from Libya's 2011 collapse – rushed over the border from Mali.

An estimated 70,000 people have fled their homes since January, according to the United Nations, as Islamist extremists aim to take over northern and eastern towns and eradicate Western influence.

They're targeting religious institutions and leaders, foreign-run companies and mines, said Emily Estelle, who tracks the spread of terrorism for the Critical Threats Project at the American Enterprise Institute in Washington, DC.

She said the problem could tip into areas previously untouched by extremist violence.

"If this trend continues," Estelle said, "we could see attacks on churches in neighboring Christian-majority countries where militants seek to expand – like Ghana, Benin and Togo."

The Pentagon is pushing forward with plans to reduce US forces in Africa by 10 per cent over the next three years. Most of the cuts are to come in West Africa. The United States has about 7200 troops and other personnel on the continent.

The Trump administration has said it wants to shift its focus to countering Chinese and Russian influence in Africa while addressing terrorism with intelligence sharing and training exercises.

Military officials have recently expressed concern about instability in the region.

"I would tell you at this time, we are not winning," Air Force Major General J. Marcus Hicks, head of US Special Operations Command Africa, told reporters in February on the sidelines of Flintlock, a military training exercise in Burkina Faso.