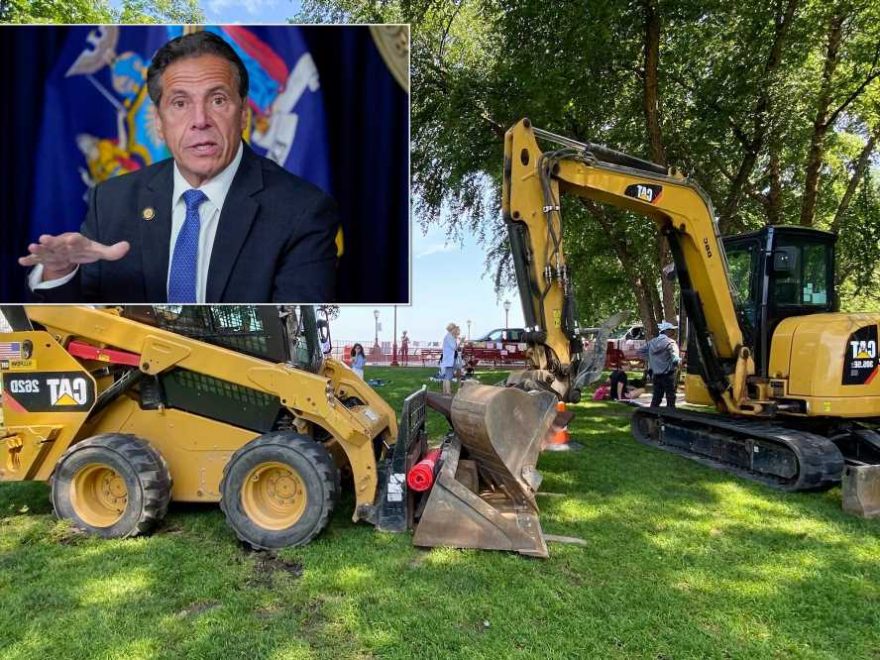 Residents of Battery Park City are protesting a plan by Gov. Andrew Cuomo to take green space from a local park to make way for a concrete coronavirus memorial to honor essential workers.

The growing number of opponents said they were blindsided and steamrolled by Cuomo, who made the announcement last week to erect the “Circle of Heroes” memorial for COVID workers in Rockefeller Park — without input from the Battery Park City community.

“This memorial requires bulldozing a local community park with natural grass and trees where many friends and family members gathered safely outdoors during the pandemic, and where many children run and play. The memorial will replace natural grass with concrete and an ‘eternal flame,’” said Battery Park City resident Adrian Mak.

“The memorial site was chosen in secret without any public hearings, public meetings, or community input.”

Cuomo appointed a task force consisting exclusively of union leaders to recommend a site and excluded any members of the Battery Park City community, critics said.

Cuomo said the new memorial would open on Labor Day, and feature an eternal flame along with 19 red maple trees, symbolizing the 19 types of essential workers who kept the city afloat during the darkest days of the pandemic.

Opponents started a Change.org online petition that has been signed by nearly 5,000 people.

In a partial reprieve, construction workers moved equipment and tarps off the lawn following complaints from park users.

Rep. Jerrold Nadler (D-NY) said in a Twitter statement, “New York’s essential workers deserve our honor and respect — and we can commemorate them with a memorial. But bulldozing vital open space in lower Manhattan isn’t the way to do [email protected] needs to #PauseTheSaws and consult with the community on location and design.”

Councilwoman Margaret Chin, who also represents BPC, sent a fiery letter to Cuomo Monday urging him to stop the project.

“I am writing to urge you to halt current plans to erect a memorial in Battery Park City’s Rockefeller Park. The announcement on June 23rd about the monument’s siting and expedited construction timeline came as a shock to my office and the local Battery Park City community,” said Chin.

“The project is on course to create serious quality of life issues for local residents, who have relied on this open green space throughout the pandemic. I strongly encourage you to order construction to stop until there has been a proper process of community engagement with local residents and elected officials,” Chin said in the letter to Cuomo.

Chin and other opponents said essential workers who died during the pandemic deserve a memorial — but at a more central location.

Community Board 1 said in a statement on Twitter, “Governor Cuomo announced he was taking away park space last week and the earth moving equipment showed up before the weekend was up. All this because he refuses to work with the Mayor [Bill de Blasio] to jointly honor Essential Workers. This is where the children play.”

Cuomo defended the BPC location for the essential workers’ memorial. But in a compromise, he has agreed to move it from the center of the park to a corner area after hearing community blowback, an administration official said.

“We’re proud to be planting 19 trees for a life-affirming monument in a destination park made for all New Yorkers to enjoy, in the shadow of the symbol of New York’s resilience and openness,” said Cuomo spokesman Jordan Bennett.

“This location was chosen in an open process by 23 leaders representing hundreds of thousands of essential workers, and the site design allows for people to continue to enjoy the park space. We look forward to working with everyone who uses this public space and to seeing generations of New Yorkers from across the state enjoy and celebrate this monument.”