CORONAVIRUS deaths have soared by 92 PER CENT in just a week – as the impact of Christmas and New Year mingling is revealed.

New official statistics show that there were 6,057 deaths involving Covid-19 in England and Wales in the week ending January 8. 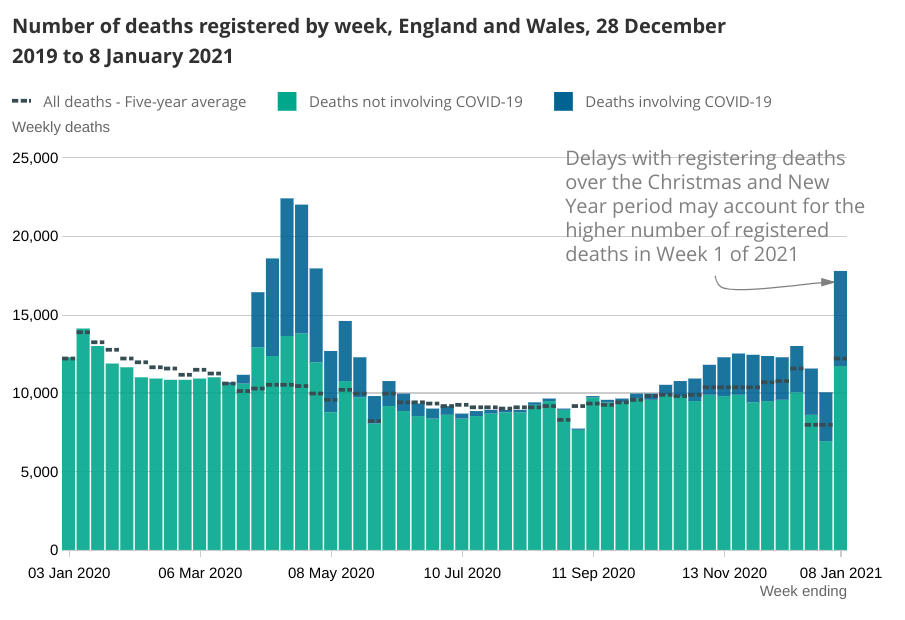 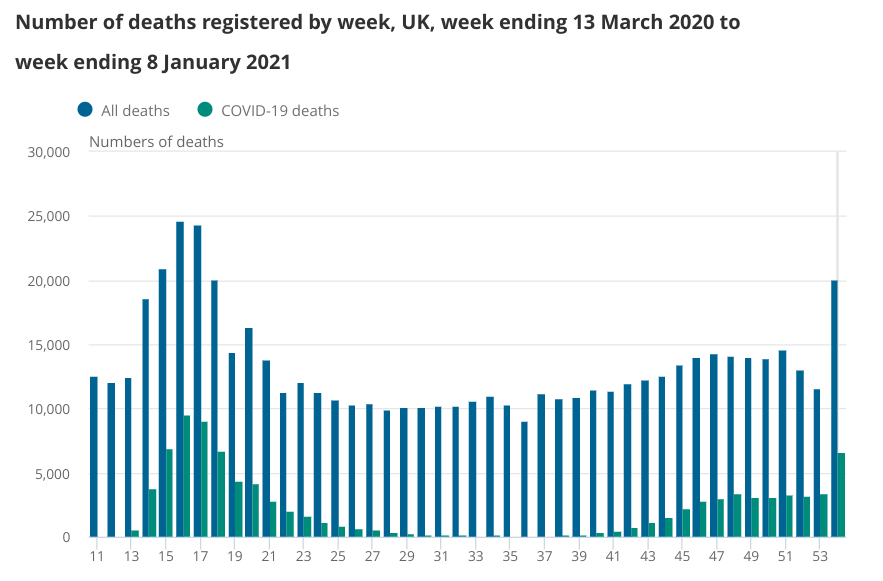 It's an increase from 3,144 deaths – almost double – in the previous week, the Office for National Statistics (ONS) today said.

Of all deaths registered in the first week of January, 34.1 per cent mentioned Covid-19 – the highest proportion of Covid deaths since the week ending May 1.

Overall, in the same week, 17,751 deaths from all causes were registered – a "sharp increase" from the previous seven days, the ONS said.

But the statisticians said the figures should be interpreted with caution as the Boxing Day and New Year's Day bank holidays will have affected numbers previously registered. 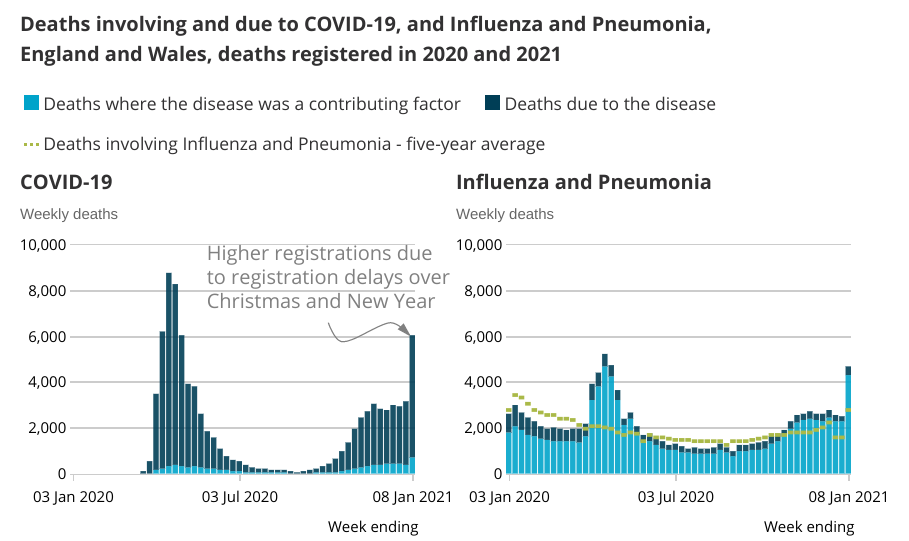 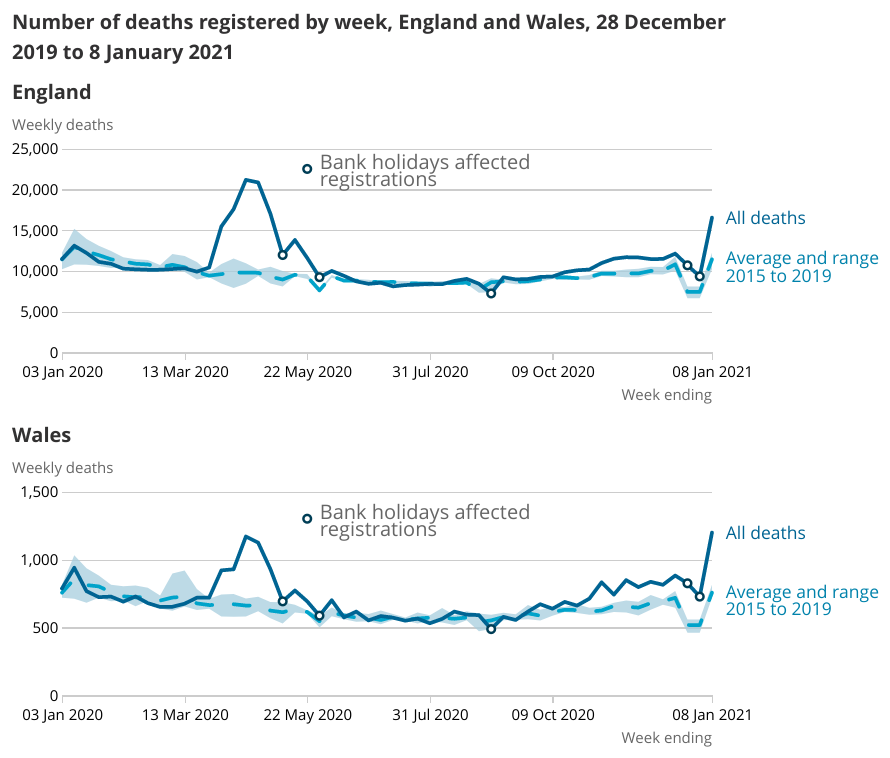 The ONS said it estimates the number of deaths actually occurring – rather than registered – was between 14,008 and 17,728.

This is compared with 4,649 deaths that involved flu and pneumonia, where 380 – 8.2 per cent – had this recorded as the underlying cause of death.

All regions of England recorded an increase in registered Covid-19 deaths in the week to January 8. 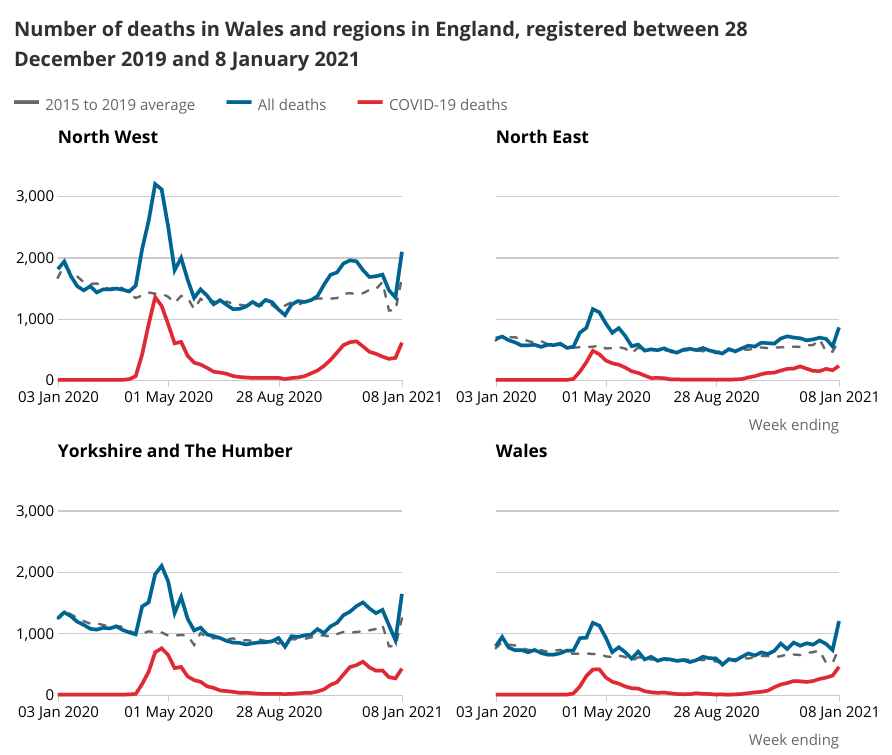 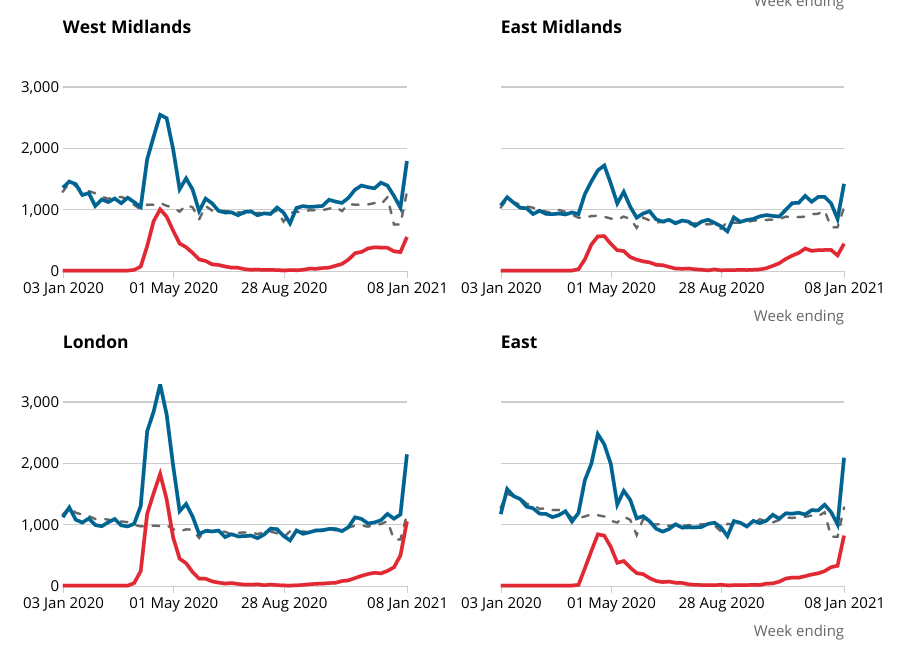 Eastern England had 816 deaths in the week to January 8, up from 325 in the previous week.

Meanwhile, more than half of deaths in hospitals registered in the week ending January 8 involved coronavirus – 4,685 out of 9,108.

The ONS also produced the first weekly dataset on the registered deaths of care home residents, including deaths that occurred in the care home but also elsewhere.

It found that 1,370 deaths of care home residents involving Covid-19 were registered in the week ending January 8.

Deaths involving the virus of residents in care homes, as notified to the Care Quality Commission (CQC), have almost doubled in a fortnight.

There were 1,260 deaths involving Covid-19 in care homes notified to the CQC in the week ending January 15, a 45% rise from the 864 deaths notified during the previous week. 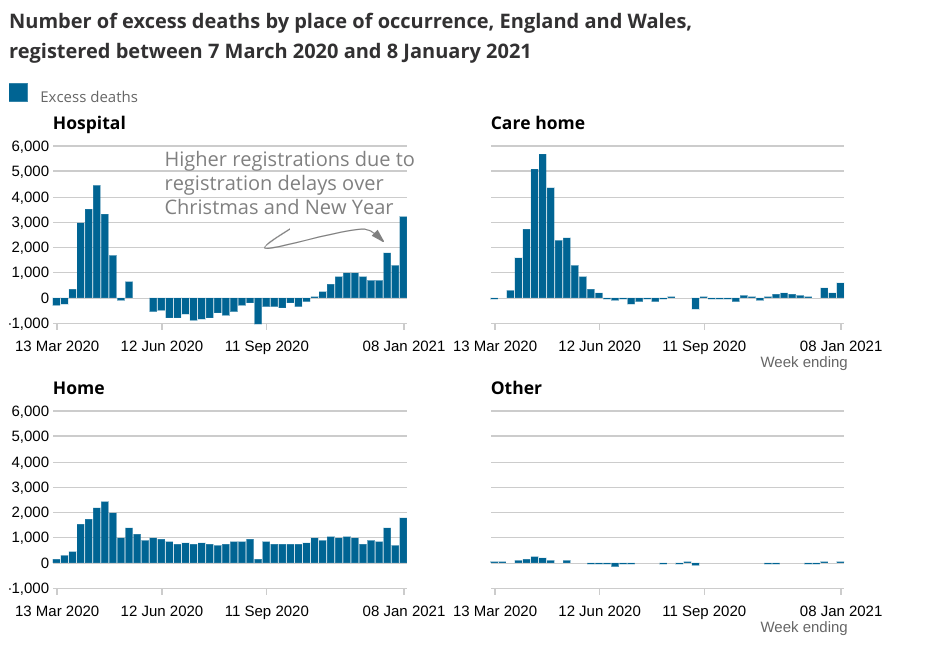 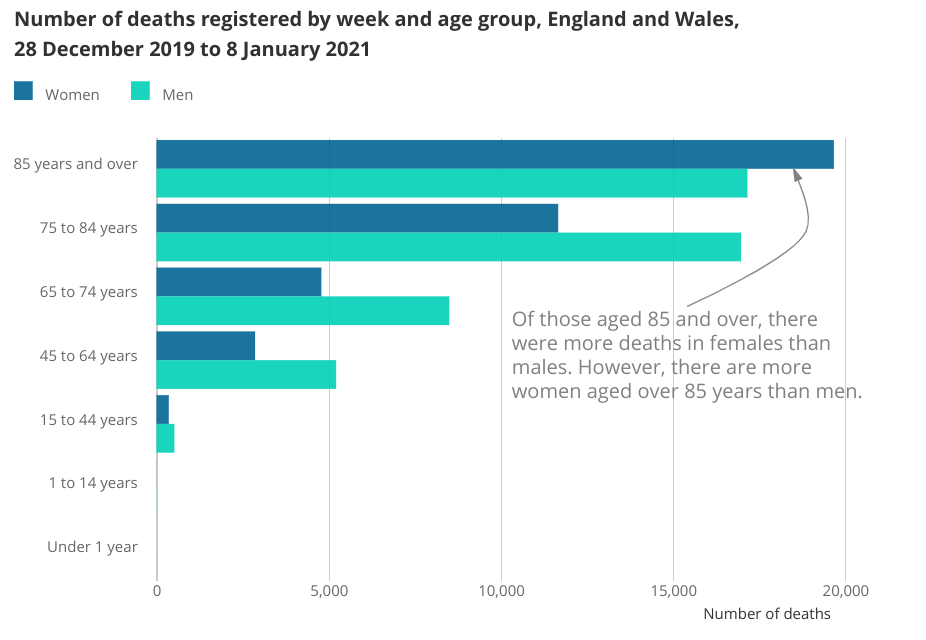 And it is almost double the 661 deaths notified to the regulator in the week ending January 1.

There were also 422 CQC-notified deaths of care home residents in hospitals involving Covid-19 in the week ending January 15, and 24 occurred elsewhere or in a location not stated.

The grim report today also showed that more than 106,000 deaths involving Covid-19 have now occurred in the UK.

A total of 99,813 deaths have so far been registered in the UK where Covid-19 was mentioned on the death certificate.

This includes 90,720 deaths in England and Wales up to January 8, which were confirmed by the ONS on Tuesday.

Since these statistics were compiled, a further 6,447 deaths have occurred in England, plus 146 in Scotland, 260 in Wales and 181 in Northern Ireland, according to additional data published on the Government's coronavirus dashboard.

Together, these totals mean that so far 106,847 deaths involving Covid-19 have taken place in the UK. 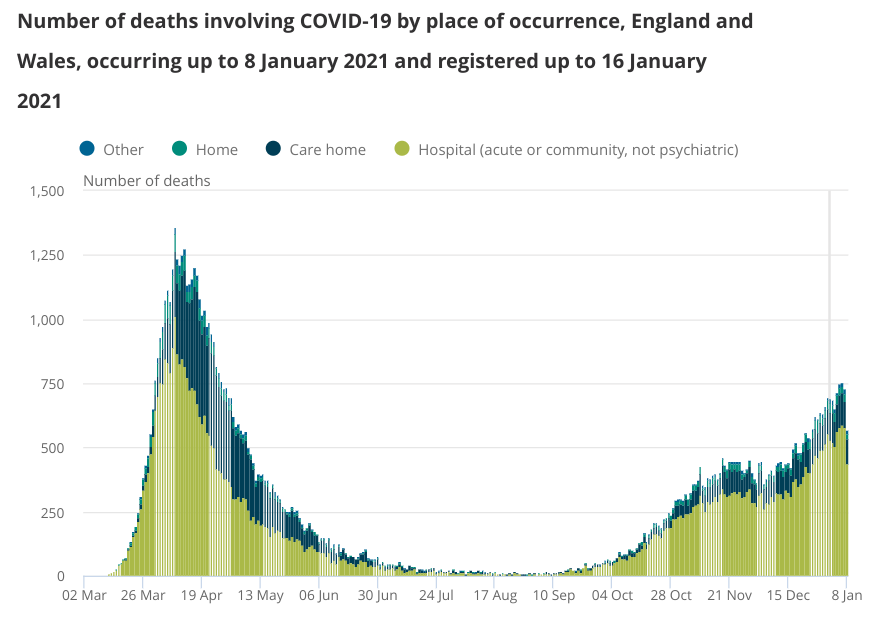 Meanwhile, a separate ONS report found an estimated one in eight people in England had had Covid-19 by December last year.

This is up from one in 14 in October, the new figures also published today revealed.

Antibody data on infection in private households suggests that one in 10 in Wales had also been infected by December, alongside one in 13 in Northern Ireland and one in 11 in Scotland.

The figures come from the Office for National Statistic's Covid-19 Infection Survey in partnership with the University of Oxford, University of Manchester, Public Health England and Wellcome Trust.

They are based on the proportion of the population who are likely to have tested positive for antibodies to Covid-19, based on blood test results from a sample of people aged 16 and over.

The ONS found "substantial variation" between regions in England, with 17 per cent of people in private households in Yorkshire and the Humber estimated to have tested positive for antibodies in December, compared with five per cent in south west England.

The study came as Health Secretary Matt Hancock revealed he is self-isolating after receiving an alert through the NHS Covid-19 app.

Meanwhile, the Government has pledged to divert jabs to over-80s in Covid vaccine blackspots.

It comes after yesterday gave the go-ahead to begin vaccinating the next priority groups – the over-70s and the clinically extremely vulnerable.

But it sparked concern over a 'postcode lottery' as some over 80s had yet to receive their first jab dose.

Northern Ireland Secretary Brandon Lewis today said "there will be an overlap" between those in the first group getting their jab and those in the second as the NHS keeps up the momentum of the vaccine rollout.

On Monday night, Mr Hancock acknowledged that some parts of the country had made better progress than others in vaccinating those in the top priority group, but said more supplies of the vaccine are being pumped to areas that have fallen behind.

Nevertheless, some GPs have taken to social media saying they are "crying out for more vaccines" and that their elderly patients want to be vaccinated in local surgeries rather than having to travel further afield to mass centres.

The number of people in the UK receiving their first dose of a Covid-19 vaccine has now passed four million and the Government is still on track to vaccinate around 15 million high-priority people across the UK by February 15.

Once those vaccines have taken effect, around two to three weeks later ministers will consider whether lockdown measures can be eased in England.