More than 40 refugees locked up in a secure wing at the Park Hotel in Melbourne are awaiting COVID-19 test results, with more cases likely after at least three men tested positive.

Many of the men are already medically vulnerable, having been evacuated on medical grounds from detention at Manus Island and Nauru. Others have been transferred from other detention facilities including Villawood. 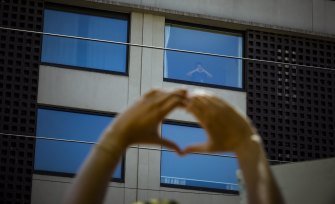 Protestors outside The Park Hotel in Carlton earlier this year.Credit:Chris Hopkins

Among the more vulnerable people held at the Park Hotel are men with chronic asthma. Particular concerns are held for a man who suffers from burns to more than half his body, as well as inhalation burns, after self immolating at Nauru.

In a statement, Australian Border Force said all refugees and asylum seekers were offered vaccines from August.

But the majority of refugees and asylum seekers held by Australia in detention centres, hotels and other temporary facilities, have not been fully vaccinated.

Australian Medical Association vice president Dr Chris Moy called on the federal government to intervene in the emerging crisis, and allow the men to live in community detention while their bids for resettlement were determined.

“It’s becoming obvious that indefinite detention in hotel rooms is leading to poor mental health and physical health problems, as many Australians, in their relatively short periods of hotel quarantine coming back into this country, have found,” he said.

“We really need a humane response from the federal government, which puts health first and above the other political matters, which are their main concern.”

“The expert medical advice could not have been any clearer about the risk of detaining vulnerable individuals during a global pandemic,” he said.

“On top of the years held offshore these men, transferred for medical treatment, have now been detained for close to two years in conditions wholly unsuitable.”

Last year more than 1180 healthcare professionals signed a joint letter to the government calling for the men to be released, saying makeshift detention centres, like hotels, represent “a very high-risk environment” for the virus to be transmitted.

Australian Border Force said detainees were placed into quarantine as soon as they showed symptoms.

“Standard departmental protocols are being followed in relation to a positive diagnosis including contact tracing, quarantining, testing and cleaning, in conjunction with the Victorian public health unit.”

Salah Mustafah, who is being held at Park Hotel with his adult son, said all detainees were tested on Sunday night, and now waiting the results.

“The situation here is very bad,” he said.

“These two guys or three guys [who] have COVID-19, they had fevers, always have headache. [For] two days, never anyone do anything for them.”

Another man, Azizi, spoke to The Age from a room where he was placed into quarantine on Sunday.

Azizi said he was sick for a week, but when he told medical staff of his symptoms, they offered him Panadol and did not test him.

Coughing and, at times, struggling to speak, he said he had chest pains and was checked by nurses twice in 24 hours.

“We are deeply concerned for the health of the men trapped in the Park Hotel, for those with and those at danger of the outbreak. The men were transferred for medical treatment, including respiratory issues, such as chronic asthma. Instead of providing adequate care, we’ve locked them up in conditions that make them vulnerable to exposure.”