The Park Hotel in Carlton is unfit to house asylum seekers detained by the federal government as COVID-19 continues to circulate throughout the facility, a court has been told.

Lawyers representing refugee Azizi, an asylum seeker from Afghanistan who caught COVID-19 while detained at the hotel, told the Federal Court on Tuesday that his detention there was putting him in danger and that he was receiving inadequate medical care. 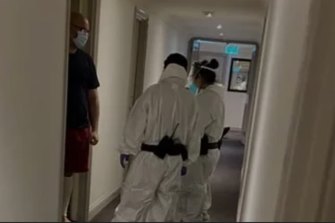 Inside the Park Hotel, where 46 asylum seekers and refugees are detained.

Another asylum seeker in the facility has tested positive to COVID-19, bringing the outbreak tally to 21. Almost half of the 46 refugees at the hotel have tested positive.

Azizi’s lawyer, Daniel Taylor, told Justice Rolf Driver that his client was seeking orders from the court to be removed from the hotel to stay in a more appropriate quarantine facility.

“The [Home Affairs] minister has not been clear whether the … building is a residence or a quarantine facility or a detention facility. The closed environment is obviously extremely dangerous. COVID kills people.”

Mr Taylor said epidemiologists consulted by the applicants found that people who were COVID-positive should not be held at the hotel.

The matter is set down for trial in the Federal Court next week. Several other refugees are also making applications for release from the hotel.

Justice Driver agreed with concerns raised over the safety of detaining asylum seekers, several of whom remain unvaccinated and have other health issues, in a facility not properly equipped to hold people who have tested positive.

“I think it’s perfectly reasonable to suggest it’s not a great idea to house immigration detainees in a hotel quarantine facility,” he said. “Particularly if there is no access to fresh air, air is recirculating within the building and there’s no negative pressure between rooms and corridors.”

The court heard during a hearing last week that an ambulance had taken a detainee to hospital with COVID-19 on Friday, but an ambulance called for another refugee by advocate Jane Alcorn had not arrived.

Government lawyer Claire Roberts said this was not on orders from Australian Border Force but was a matter for Ambulance Victoria, which was stretched during the pandemic and might not have considered the man to be in urgent need.

Azizi told The Age last week that the virus had been circulating for at least a fortnight and the detainees were only tested a week ago.

He said he asked the agency responsible for the medical treatment of asylum seekers, International Health and Medical Services, for a COVID-19 test about two weeks ago when he became ill, but staff offered him pain relief medication instead.

Last week, state Health Minister Martin Foley wrote to the Commonwealth about Victoria’s concerns that federal authorities were yet to provide adequate information to the state’s public health team about the levels of infection prevention and control in place to protect the detainees.

In March 2020, the Australian Human Rights Commissioner wrote to the government requesting it implement advice from medical experts to release people who did not pose a significant security or health risk from immigration detention.

By February 2021, around 80 medevac refugees had been released from closed detention, although not for health reasons. The then home affairs minister, Peter Dutton, said detention cost too much – but not enough to free the remaining 80 still being held.