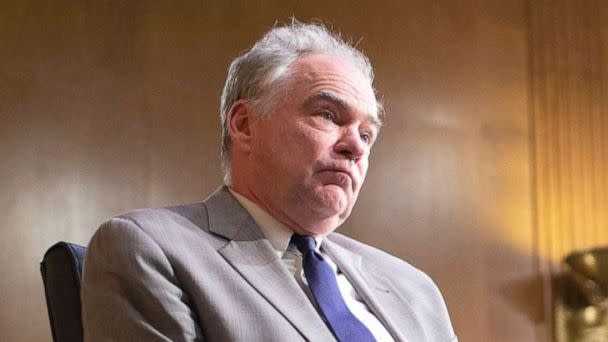 President Biden’s contention in a recent interview that the “pandemic is over” is complicating Senate Democrats’ efforts to secure needed Republican support for COVID-19 relief funding that had been requested by Biden’s administration.

“COVID is not over,” Sen. Tim Kaine, D-Va., said Monday when asked about Biden’s remarks, made during a “60 Minutes” appearance that aired the previous day. “I don’t know what he meant — some people use ‘pandemic’ or ‘epidemic’ or other phrases. And he said that COVID isn’t over, the pandemic is over. But the way I look at it, COVID isn’t over.”

“The variants are still out there. We are all hoping that it’s over [but] nobody is going to predict with certainty that it is. I’m not,” Durbin, D-Ill., told ABC News on Monday.

When pressed on the fact that the president twice resolutely stated that he believed the pandemic had ended, Durbin shrugged: “Maybe he knows something I don’t.”

MORE: Is the COVID pandemic really ‘over’ like Biden says? Experts say no

“The president has asked in the past not just for pandemic funds for COVID-19 but to prepare for what might be next. And I think that’s always obvious and fair to do that,” Durbin said. “Maybe that’s his approach to it, I’d have to ask him.”

His comments soon became fodder for Republicans who already opposed the additional $22 billion COVID funding for testing and vaccine development that the White House sought.

The administration’s efforts to get lawmakers on Capitol Hill to approve more money have been repeatedly blocked by Republicans. Currently, the White House hopes to have the $22 billion included in a must-pass government funding bill.

‘It makes it eminently harder for sure’

But at least 10 Republicans would need to support that move.

The top Republican on the Senate’s health committee, North Carolina’s Richard Burr, wrote in a Monday letter to the president that he “watched with great interest” Biden’s “60 Minutes” interview.

In the letter, Burr asked for more information about how Biden’s view that the “pandemic is over” might influence some of the administration’s policies, including its request for more COVID-19 funding.

“Despite Americans having largely returned to normal life, which you acknowledged when you noted that attendees at the Detroit Auto Show were not wearing masks, your Administration continues to request un-offset emergency funding from Congress, enforce vaccine mandates, and maintain federal emergency declarations that cost taxpayers billions of dollars,” Burr wrote in the letter.

Sen. Bill Cassidy, R-La., called Biden’s request for additional money “crazy” since he has now said the pandemic is ended.

MORE: Biden closes door on COVID, opens one on 2024: The Note

When asked if Biden’s comments meant there was no need for further funding, Cassidy was brief: “Sounds like it to me,” he said.

But some Democrats defended the president. Sen. Chris Murphy, D-Conn., said Monday that Biden’s comments were consistent with the changing needs of addressing COVID-19.

COVID-19 ‘is not over’: Democrats buck Biden in case for pandemic aid originally appeared on abcnews.go.com