When Sharon Zhang and Nicholas Matter noticed a fine mist leaking from their hot water tank in November 2020, they called 247 Local Plumbing.

A plumber named Terry Watson arrived at their house, according to a decision in the Victorian Civil and Administrative Tribunal, and told them major works were required. 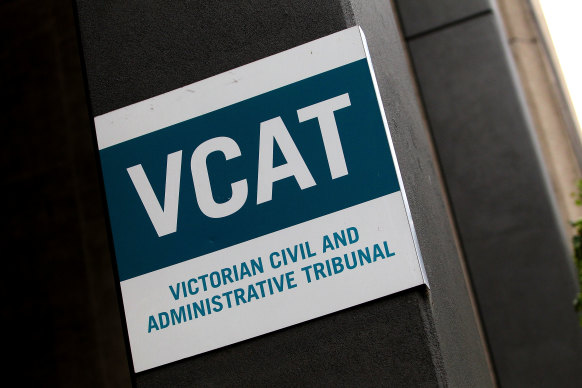 The Victorian Civil and Administrative Tribunal compared the conduct to the infamous “fees for no service” scandal in banking.Credit:Pat Scala

Bricks would need to be removed from the wall, the couple allege Watson told them. He would have to come back the next day with another plumber to get it done. It was such a large job, he told them, that they would have to pay the $2756 fee in advance.

They trusted him and paid the money.

The Age’s attempts to reach Zhang and Matter were unsuccessful, but VCAT documents say the day after they paid Watson, a different plumber showed up – someone the couple recall as being named Adam, who managed to get the job done in about an hour.

Almost immediately, Zhang thought they had been “aggressively” overcharged. She checked a few online reviews, tribunal documents say, and was concerned at “the common theme in those reviews that the respondent ripped off consumers by overcharging for purportedly urgent works”.

Zhang hired another plumber to examine the work on the couple’s home in Ormond and check the price. They said it should cost only $660. The plumber checked the job site and said no bricks had been removed.

Zhang asked 247 for an itemised bill explaining the charges, but said it did not make sense.

In the bill, they were charged $672 for brick replacement. Or, as VCAT deputy president Ian Lulham put it, $168 per brick.

To repair the leaking pipe, the couple were charged $756 for “one unit”, but it was not explained how that was calculated, the number of hours it took, the labour costs or supplies for the job.

Zhang and Matter argued their bill was inflated. They questioned why they should pay a premium for “emergency” plumbing, as Watson had suggested the job was, if it wasn’t done that day and he instead sent someone else over?

Lulham, in his decision published on August 24, found 247 Local Plumbing, and Watson, engaged in misleading and deceptive conduct by exaggerating both the urgency of the work required and the appropriate price. He compared the conduct to the infamous “fees for no service” scandal that emerged in the banking royal commission in 2018.

“[The invoice] amounts to an admission that the respondent engaged in the sort of conduct which was described in the Hayne royal commission, of a business ‘charging a fee for no service’,” he found.

Lulham ordered the plumbing company to reimburse the couple $2206 plus $374 in interest, and to pay VCAT costs of $65. However, he decided the company was entitled to retain $510 as a fair fee for the work done.

Consumer Action Law Centre chief executive Gerard Brody said it was a “very good finding” for consumers and indicated that traders cannot name a price for a job that amounts to a misrepresentation.

“Indicating that something is really urgent when it’s not, and indicating its price is appropriate for the job when it’s clearly unreasonable, may be misleading conduct,” he said.

An officer of the company, who represented 247 Local Plumbing and Watson, did not call evidence from either. They said the applicants had not been scared into entering the contract by any representation from Watson that the work was urgent or an emergency, but they did not provide evidence of this.

The officer also said the opinion of the second plumber was a result of after-the-fact reasoning.