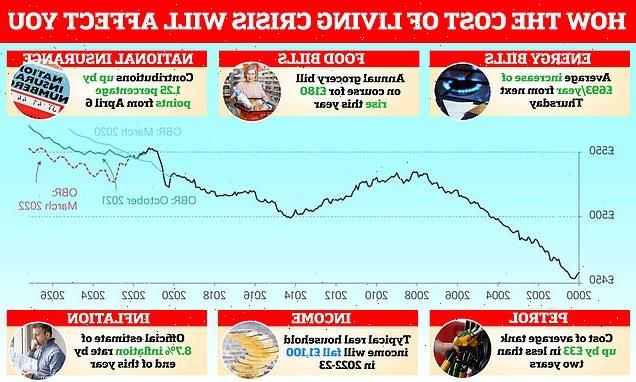 Average UK worker is £11,500 worse off: Rising energy, fuel and food bills, NI hike and record 8.7% inflation… how life in squeezed Britain will affect YOU

The average worker in Britain is now £11,500 worse off a year since the recession, a living standards think tank revealed today – with average weekly earnings now on course to rise by just £18 a week between 2008 and 2027.

The Resolution Foundation said real-term wages were in the middle of a third major fall in a just over a decade, adding that average salaries would have risen by £240 a week had they continued on their pre-financial crisis path. It added that the lost growth is equivalent to a £11,500 annual wage loss for the average worker.

The think tank also pointed out the scale of the cost of living crisis now means typical working-age household incomes are to set to fall by 4 per cent in real-terms in the next financial year of 2022/23, which is a loss of £1,100. It also said the biggest falls will be for the poorest quarter of households where incomes will drop by 6 per cent.

It comes as the energy price cap is set to rise by £693 from the start of April next Thursday from £1,277 to about £1,970 per year and is expected to increase again in October, adding to pressure on already-squeezed household finances. The regulator Ofgem said pre-payment customers will see an increase of £708 from £1,309 to £2,017.

Meanwhile the average annual grocery bill is expected to rise by £180 this year, according to the consultants Kantar which tracked a 3.8 per cent rise at the start of this year compared to the same period last year.

And Government figures show the average price of petrol has gone up by more than 55 per cent in less than two years – with the average tank of fuel now costing almost £90, which is up by about £33 on May 2020. 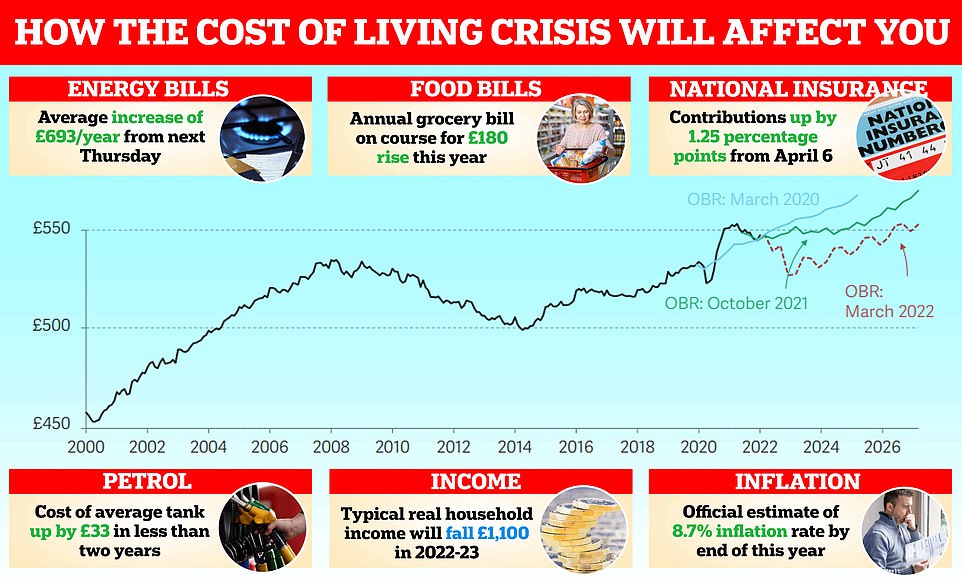 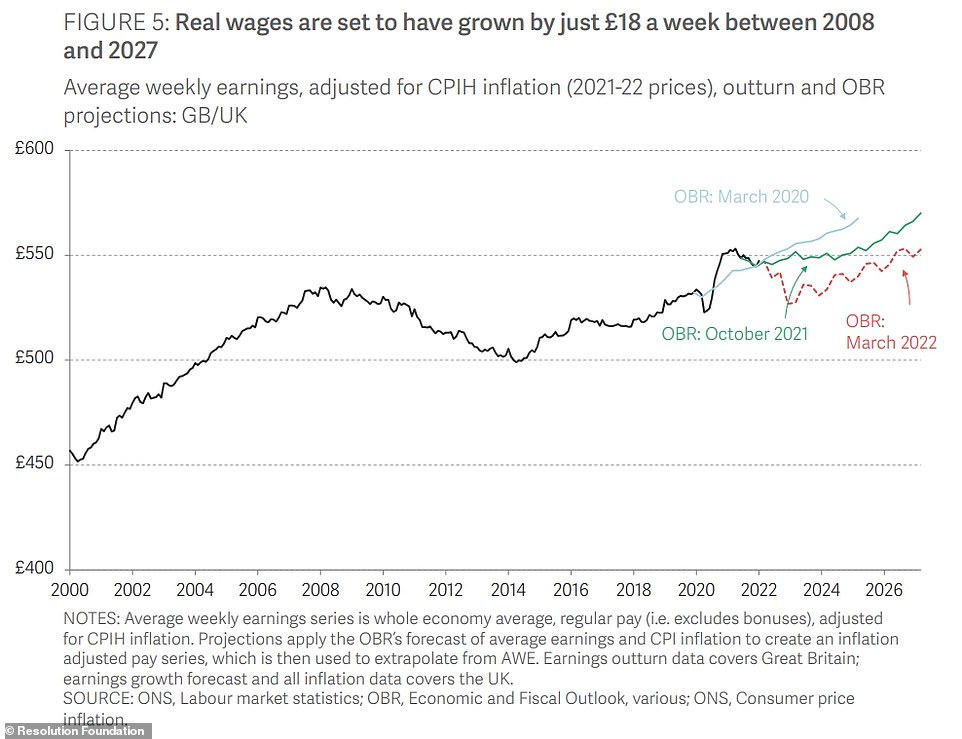 £11,500 WAGE LOSS: The Resolution Foundation, a living standards think tank, said average weekly earnings are on course to rise by just £18 a week in real terms between 2008 and 2027. This is compared to £240 a week had they continued on their pre-financial crisis path. It said this lost growth is equivalent to a £11,500 annual wage loss for the average worker 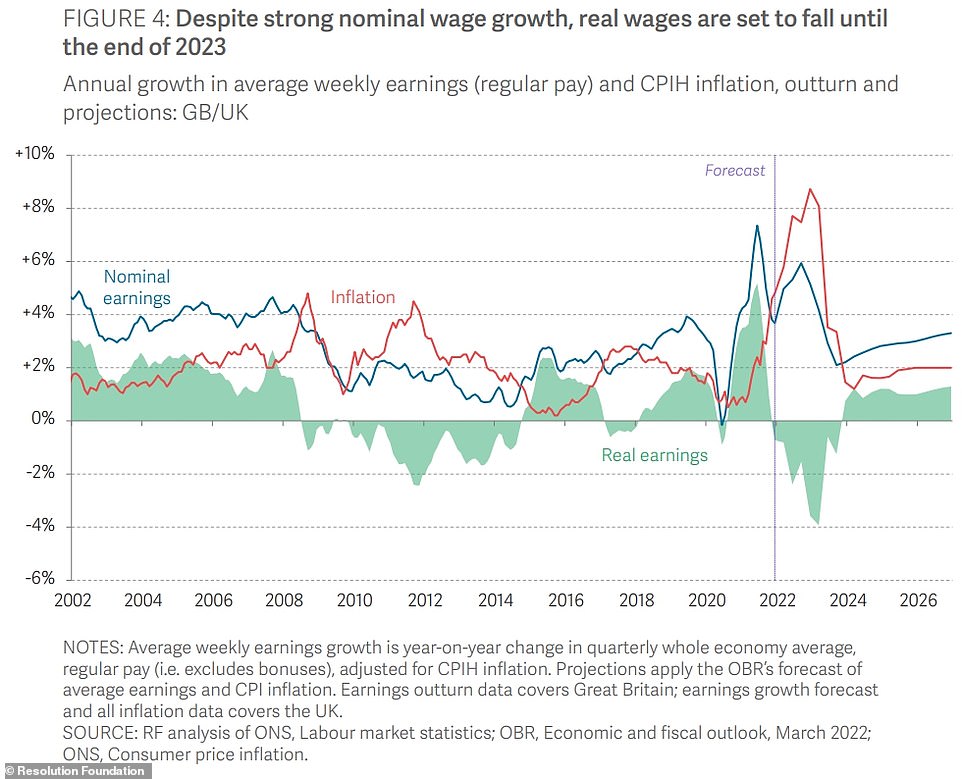 FAMILIES FACE £1,100 INCOME LOSSES: Typical working-age household incomes are to set to fall by 4 per cent in real terms in the next year financial year of 2022-23, which will be a loss of £1,100, according to the Resolution Foundation think tank 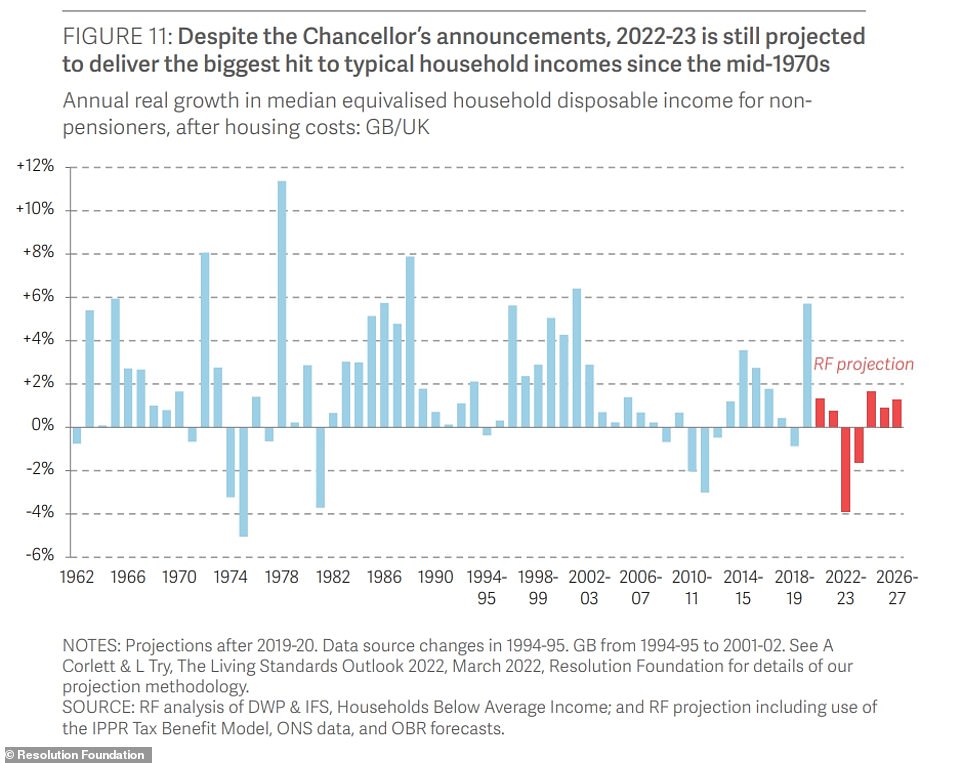 WORST HIT TO LIVING STANDARDS SINCE 1975: Based on the Office for Budget Responsibility’s new forecasts for inflation, pay, housing costs and more, and examining non-pensioner household incomes, the Resolution Foundation estimates that the typical real income will be 4 per cent lower in 2022-23 than in 2021-22: a fall of £1,100.18 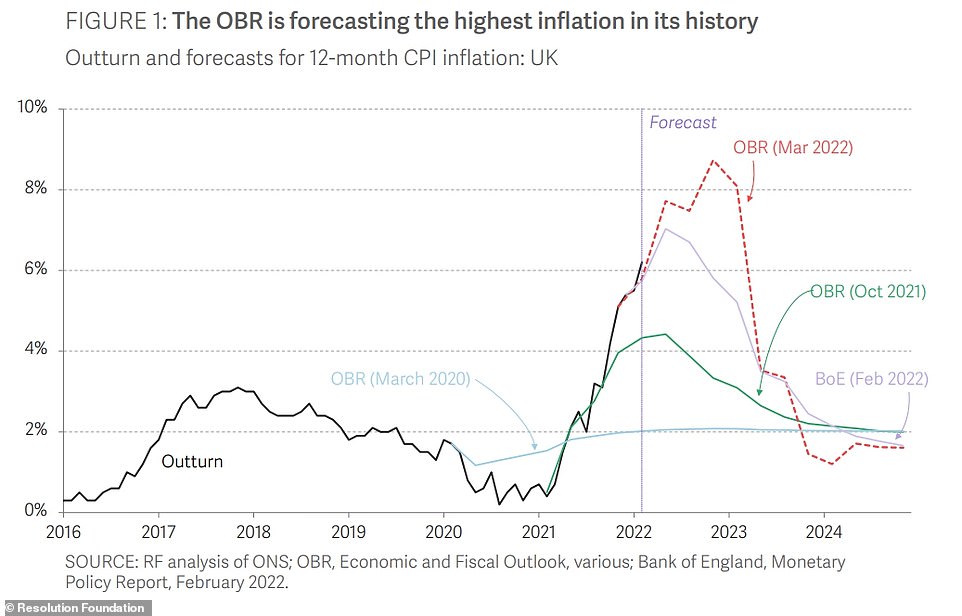 INFLATION CONTINUES TO SOAR: In addition, the Office for Budget Responsibility predicts inflation will now average 7.4 per cent this year and could reach 8.7 per cent in the fourth quarter of 2022 – the highest level for 40 years. Rising energy, goods and food prices have already pushed inflation to increase of 6.2 per cent in the 12 months to February – a 30-year high 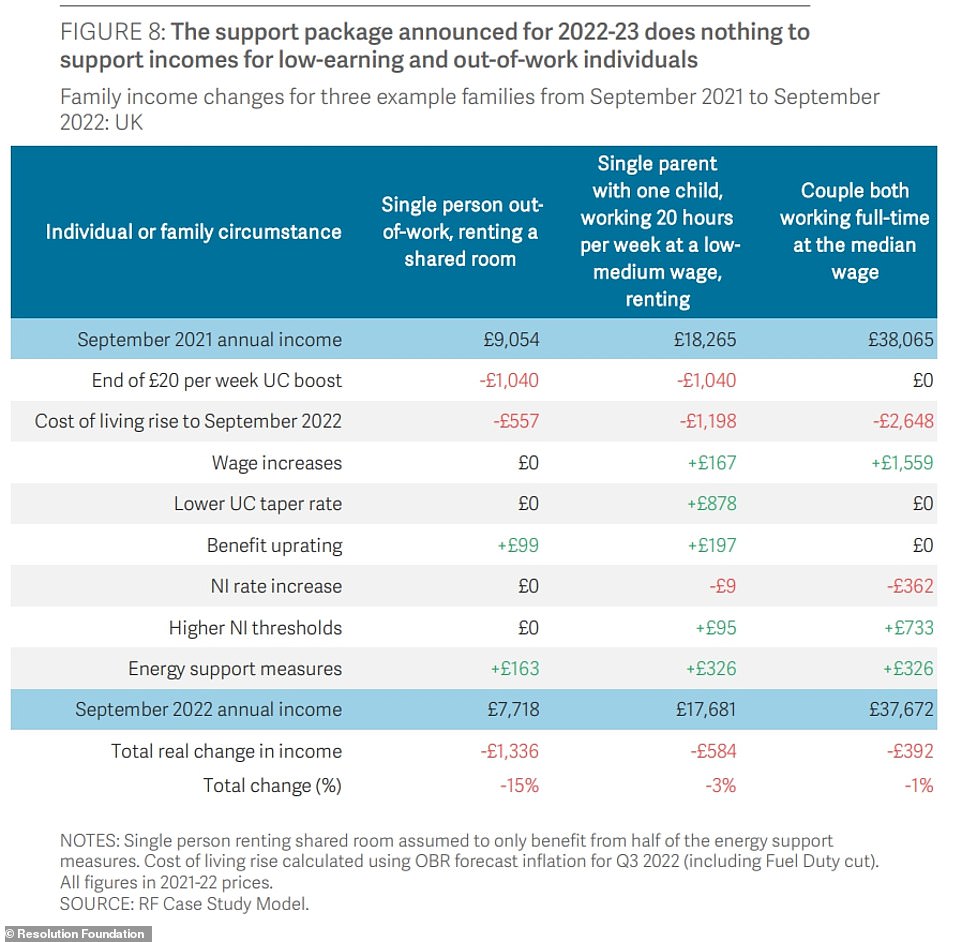 INCOME CHANGES: How three types of families could see their incomes vary between September 2021 and September 2022 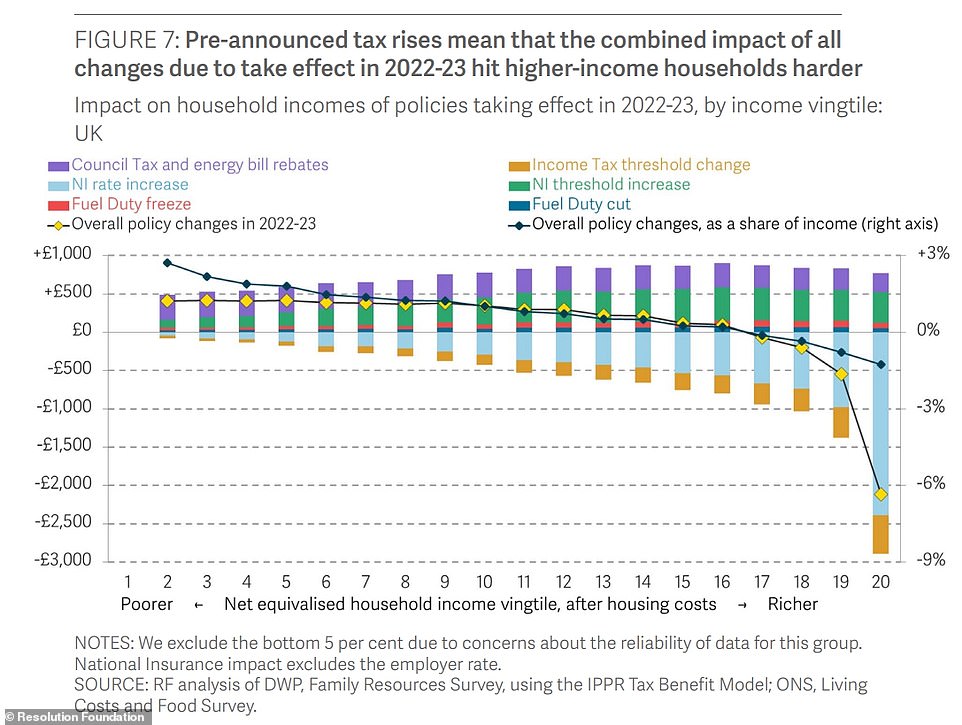 COMBINED IMPACTS: Most households gain from the package to help with April’s energy price cap rise, while higher income households lose out from the higher rate of NI and the freeze to the Income Tax personal allowance and higher-rate threshold 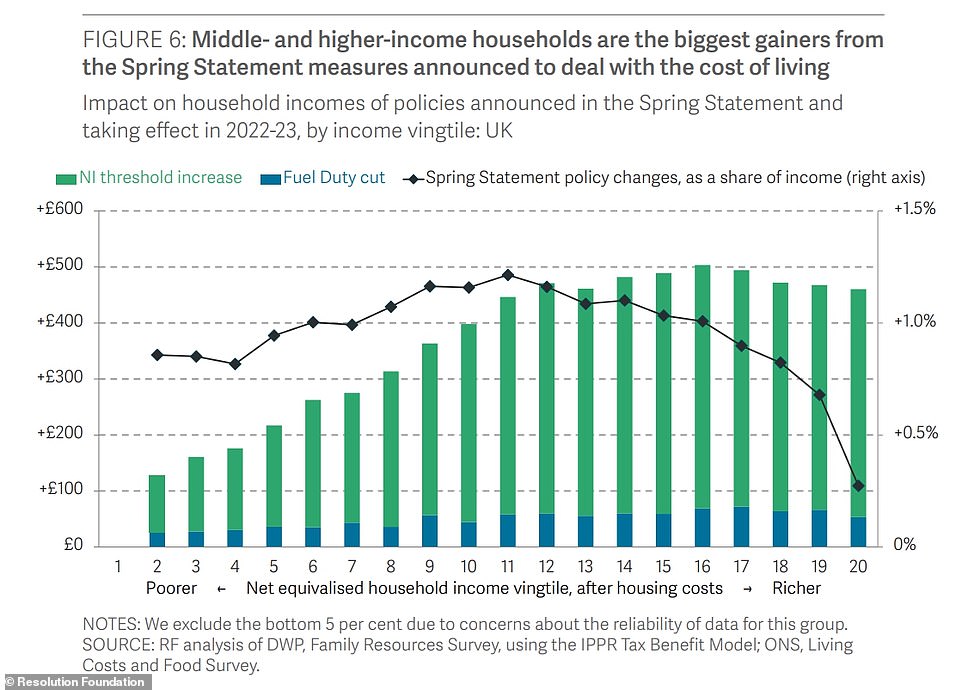 BEST FOR MIDDLE-INCOME: Middle-income households gain most as a share of income from the newly-announced changes

In addition, the Office for Budget Responsibility predicts inflation will now average 7.4 per cent this year and could reach 8.7 per cent in the fourth quarter of 2022 – the highest level for 40 years. Rising energy, goods and food prices have already pushed inflation to increase of 6.2 per cent in the 12 months to February – a 30-year high.

The Government is also pressing ahead with a 1.25 percentage point rise in national insurance, although Mr Sunak said the basic rate of income tax will be trimmed by a penny in the pound in April 2024, delivering a £5billion cut.

At a glance: Key points from spring statement

The move, only the third cut in the basic rate in the last 20 years, will benefit 30million workers and leave the average taxpayer £175 a year better off. It will take the basic rate of tax from 20 per cent to 19 per cent.

Today, the Resolution Foundation said the lack of support for low-income families in Rishi Sunak’s spring statement – announced yesterday – leaves more than one million Britons on the verge of ‘absolute poverty’.

It warned that the Chancellor’s measures represented a ‘big but poorly targeted policy package’ which does not do enough to aid the families who have been hit the hardest by the cost-of-living crisis.

In his Commons statement, Mr Sunak announced a 5p cut in fuel duty and an increase in the threshold at which people pay national insurance contributions, benefiting around 30 million workers with a tax cut worth more than £330.

He promised further support in 2024 with a pledge to cut the basic rate of income tax from 20p in the pound to 19p – ‘a £5 billion tax cut for over 30 million people’.

However, analysis from the Resolution Foundation said Mr Sunak’s measures do not meet the scale of the cost-of-living squeeze, with 1.3 million Britons set to fall below the poverty line next year, including 500,000 children – the first time Britain has seen such a rise outside of a recession.

It also determined that only one-in-eight workers will actually see their tax bills fall by the end of the parliament.

Resolution Foundation chief executive Torsten Bell said: ‘The decision not to target support at those hardest hit by rising prices will leave low- and middle-income households painfully exposed, with 1.3 million people, including half a million children, set to fall below the poverty line this coming year.

‘And despite the eye-catching 1p cut to income tax, the reality is that the Chancellor’s tax changes mean that seven-in-eight workers will see their tax bills rise. Those tax rises mean the Chancellor is able to point to a swift fiscal consolidation and significant headroom against his fiscal rules.

‘The big picture is that Rishi Sunak has prioritised rebuilding his tax-cutting credentials over supporting the low-to-middle-income households who will be hardest hit from the surging cost of living, while also leaving himself fiscal flexibility in the years ahead.

‘Whether that will be sustainable in the face of huge income falls to come remains to be seen.’

And a researcher at the Resolution Foundation, Greg Thwaites, told BBC Breakfast today: ‘It’s hard to overstate the cost-of-living crisis that this country faces. We’ve got the biggest fall in living standards on record in over 60 years… and the highest inflation rate in 30 years.’

Mr Thwaites said most Government support was going to ‘the top half of households’. He added:  ‘He’s done nothing at all for the people at the very bottom.’

Today, Prime Minister Boris Johnson said the cost-of-living crunch is ‘the single biggest thing we’re having to fix’ after the Office for Budget Responsibility warned living standards face their biggest fall in a single year since records began in the mid-1950s. 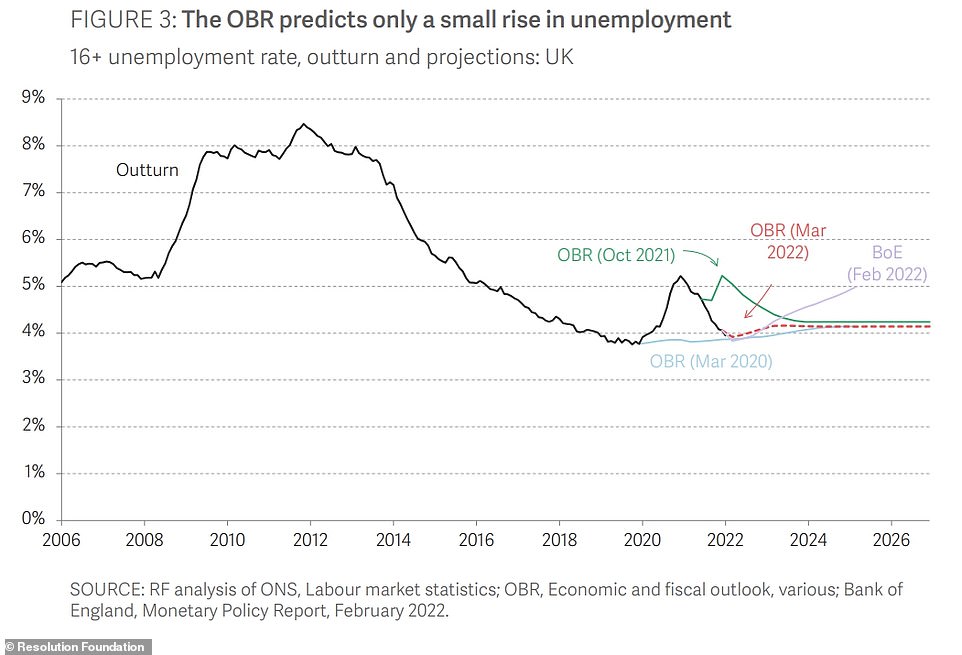 LITTLE CHANGE IN UNEMPLOYMENT: The Office for Budget Responsibility also predicts only a small rise in unemployment 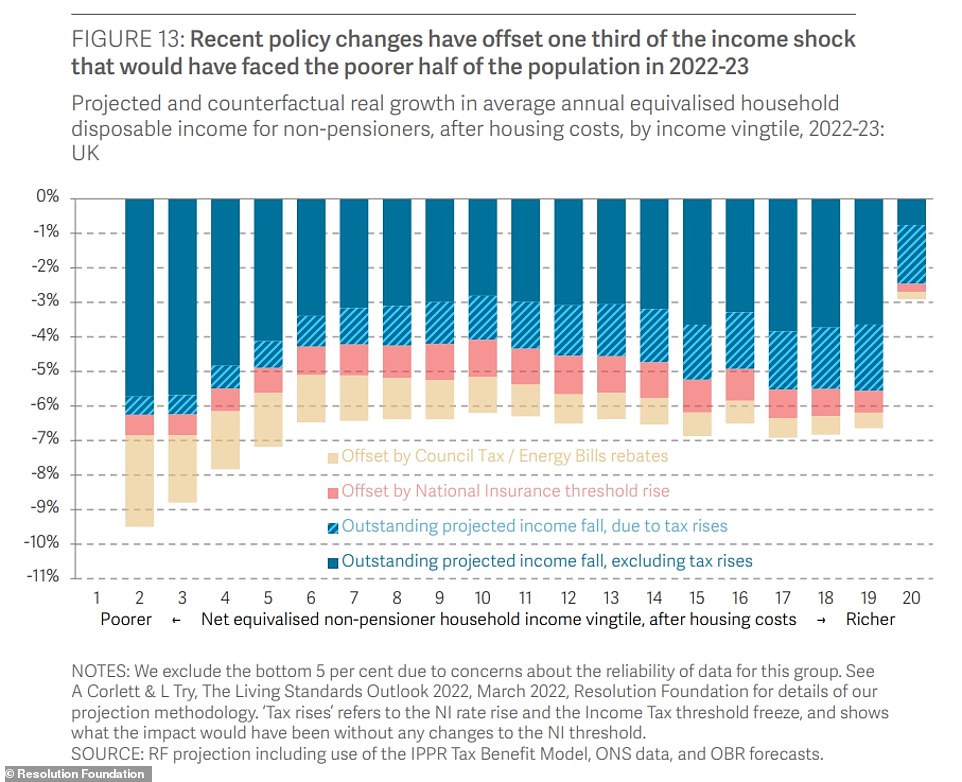 OFFSETTING THE INCOME SHOCK: The Resolution Foundation said that without the policies announced in recent months, typical incomes may have fallen by around 6 per cent, and the income fall for the poorest could have been up to 9 per cent 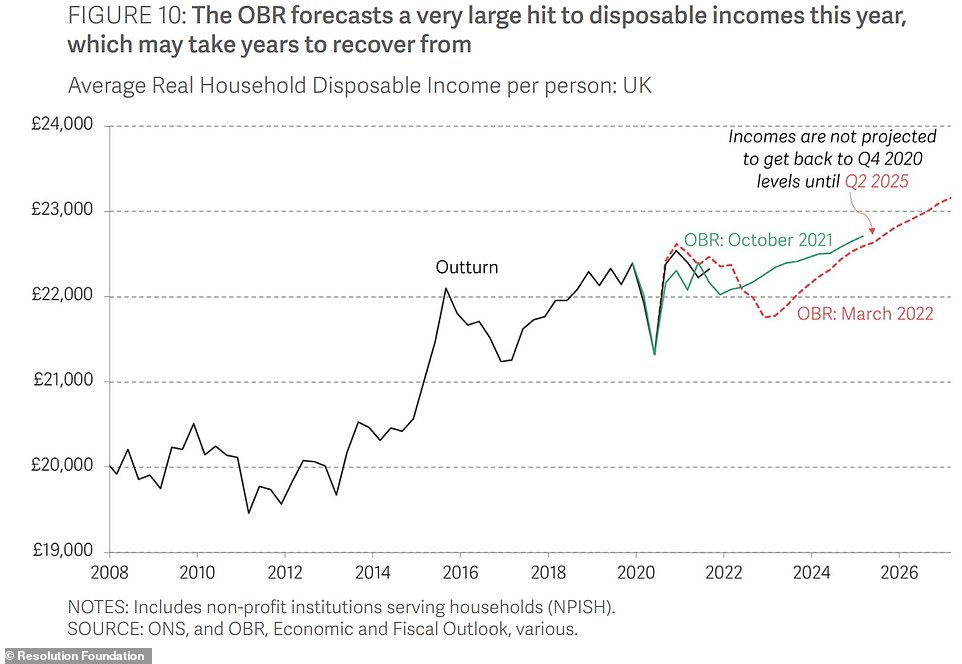 DISPOSABLE INCOMES HIT: The Office for Budget Responsibility is expecting disposable incomes to be badly affected 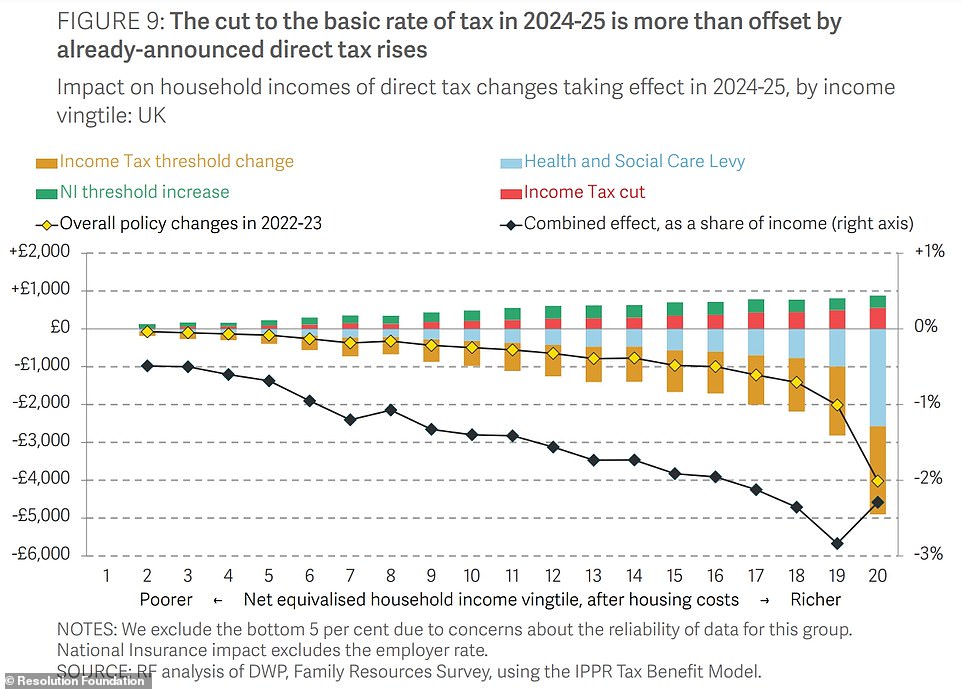 EFFECT OF TAX CHANGES: The Resolution Foundation says households in the middle of the income distribution will be £535 a year worse off, but losses among the richest 10 per cent are above £2,000 a year, over 2 per cent of disposable income 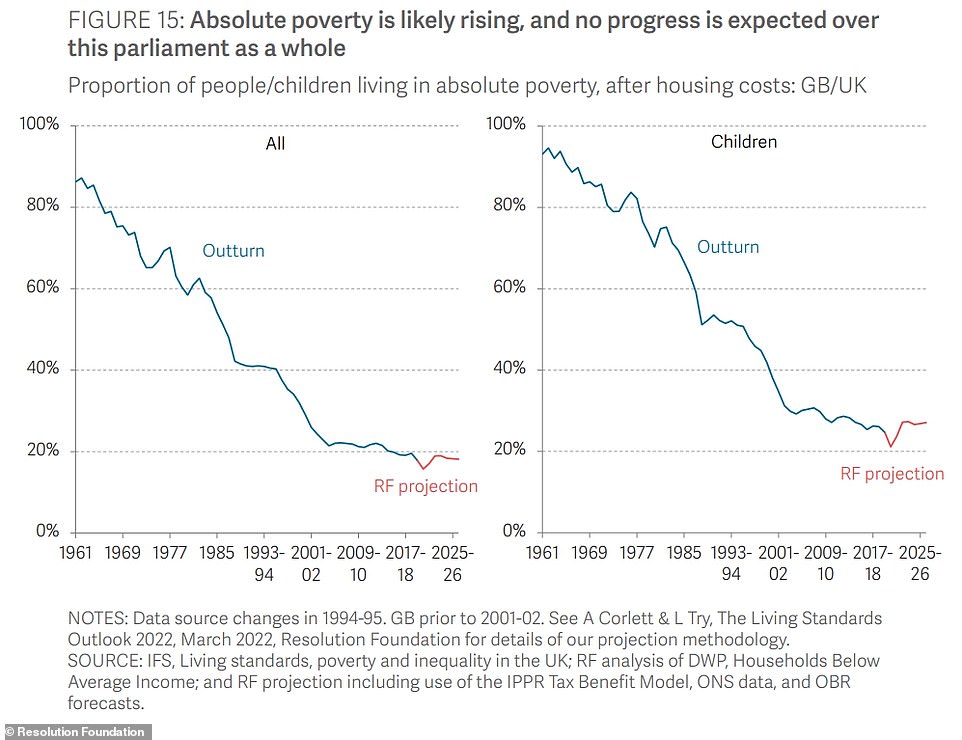 ABSOLUTE POVERTY: The Resolution Foundation said the historic norm is for absolute poverty rates to fall over time, but its modelling points to an increase in 2021/22 and a further large rise in 2022/23 and little improvement after that 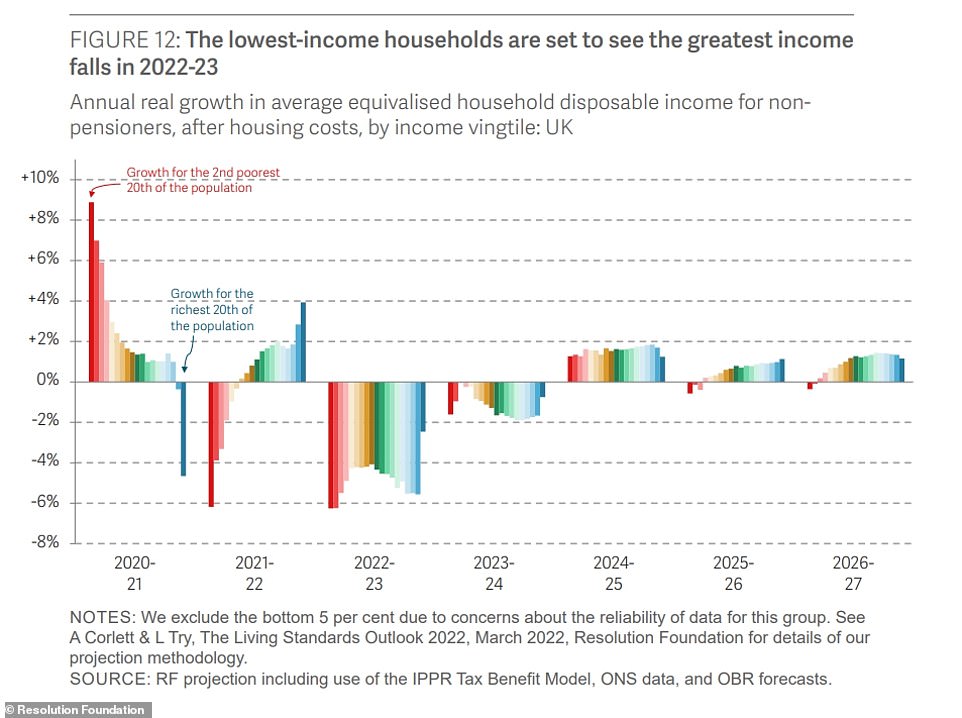 WORST FOR THE POOR: The Resolution Foundation said in its analysis that the greatest hit on incomes is for those on the lowest incomes, with the average real income of the bottom quarter falling by 6 per cent relative to 2021-22

Speaking on LBC Radio he acknowledged ‘as we go forward, we need to do more’ and ‘the cost of living is the single biggest thing we’re having to fix, and we will fix it’.

Mr Sunak hinted there would be more help with rising energy bills later in the year. And the Chancellor told the BBC: ‘I’ve always been honest; these are global challenges that we face.

‘We’re not alone in experiencing them, and I can’t, I wish I could – and it’s the hardest part about this job not being able to do everything that people would like you to do – but I can’t make every problem go away, but where we can make a difference we want to, and that’s what yesterday was about.’

The energy price cap rises by £693 in April and is expected to increase again in October, adding to pressure on household finances. 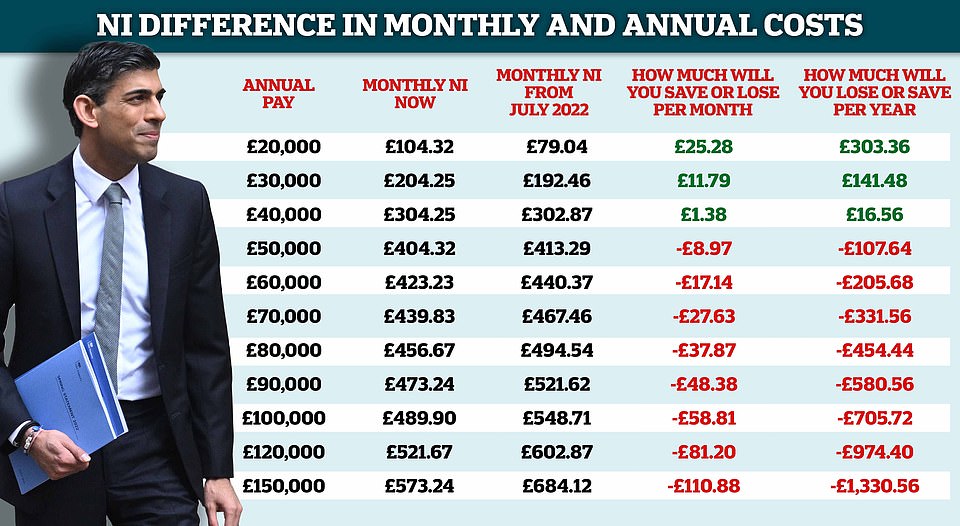 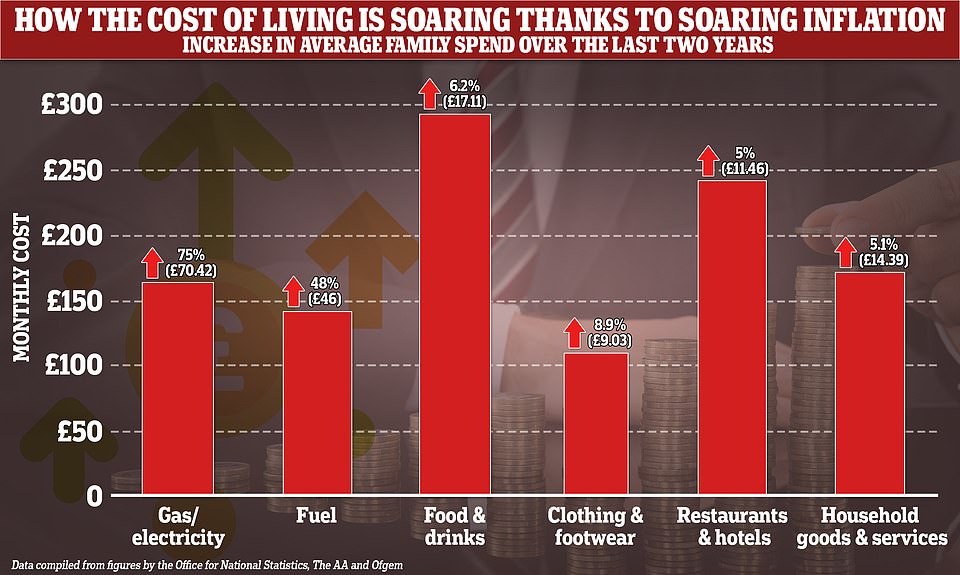 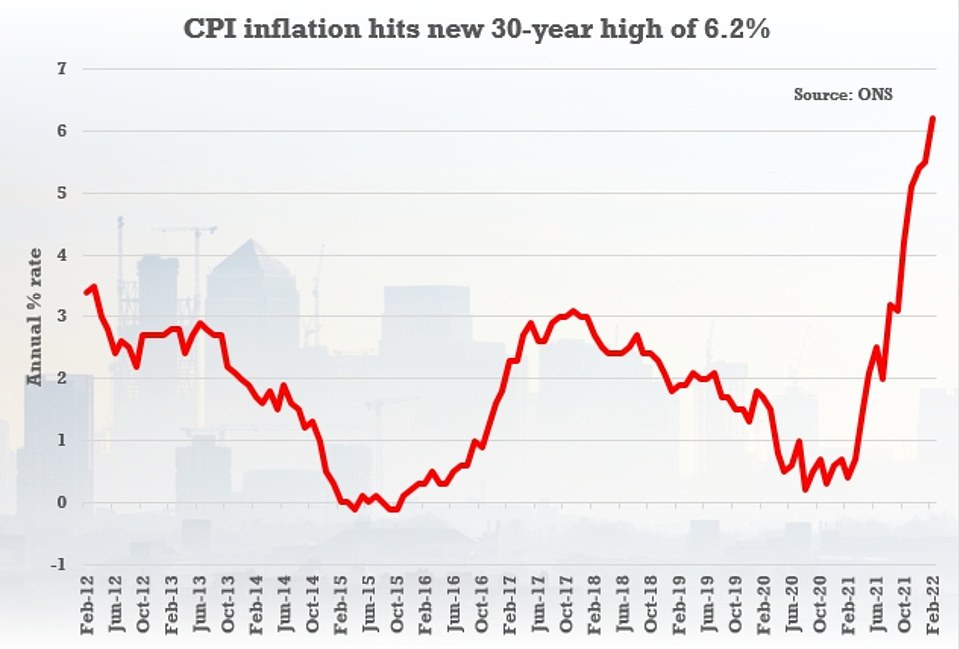 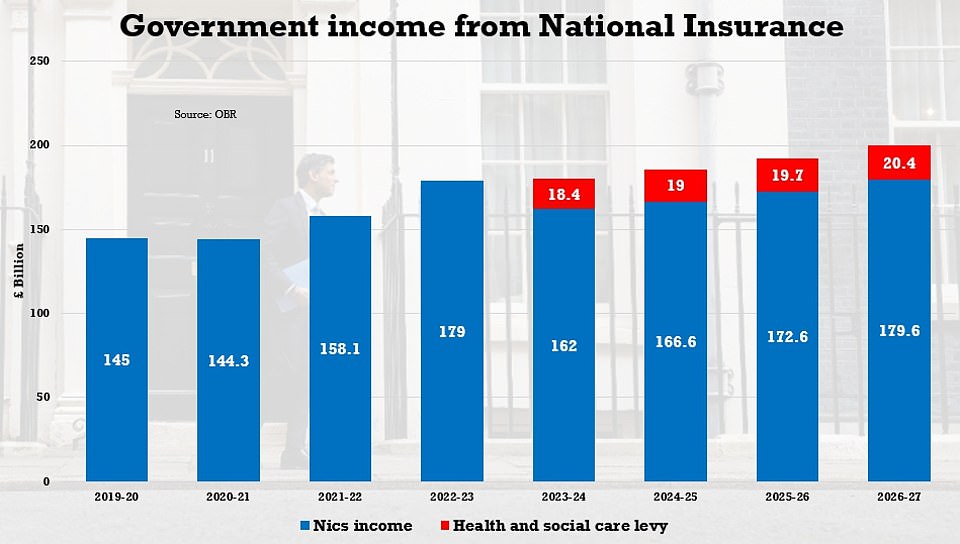 Mr Sunak told BBC Radio 4’s Today: ‘We’ll have to see where we are by the autumn and it’s right for people to recognise that they are protected between now and the autumn because of the price cap.’

Pressed on whether that means he will intervene before October, Mr Sunak said: ‘I always keep everything under review, and the Government, as it’s shown over the past two years, is always responsive to what’s happening.’

Shadow chancellor Rachel Reeves told LBC: ‘The Chancellor can say as many times as he likes that he’s a tax-cutting chancellor but it’s a bit like a kid in his bedroom playing air guitar – he’s not a rock star.

‘The problem for this Chancellor is that by the end of this Parliament, seven out of eight people will be paying more taxes – only one in eight will be paying less taxes.’

He told BBC Breakfast: ‘People are drowning in these tax rises and these higher bills. The Chancellor needed to provide a lifeboat for people and he didn’t.’