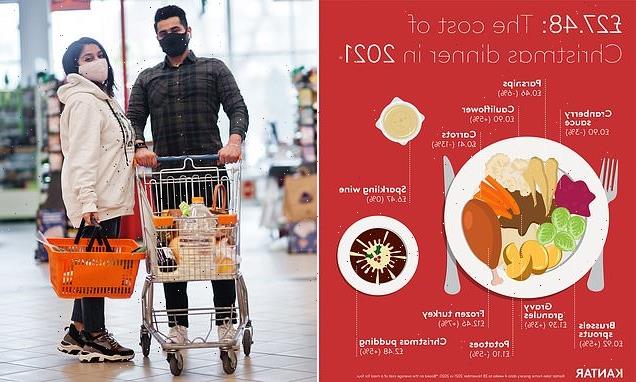 Cost of Christmas dinner rises by 3.4 per cent to £27.48 after Bank of England deputy warns inflation could ‘comfortably exceed’ 5 per cent by the Spring

The price of a typical Christmas turkey dinner has risen 3.4% this year as rocketing inflation pushes up food prices, according to new figures.

Data analysts Kantar said the average cost of a Christmas meal for four, with a frozen turkey and all the trimmings, is now £27.48.

The figures show wider grocery inflation has leapt 3.2% year on year in the four weeks to November 28 – the highest rate since June last year.

UK inflation could ‘comfortably exceed’ 5% by the spring when energy bills are set to rise again, the Bank of England’s deputy governor has warned.

Treasury minister Lucy Frazer said a new Cabinet committee has been set up for logistics to ‘deal with supply chain issues’.

Asked what steps the Treasury is taking with HMRC to prevent disruption at UK ports during the Christmas period, Ms Frazer said: ‘The Government’s priority is to keep goods moving and avoid delays at the border. 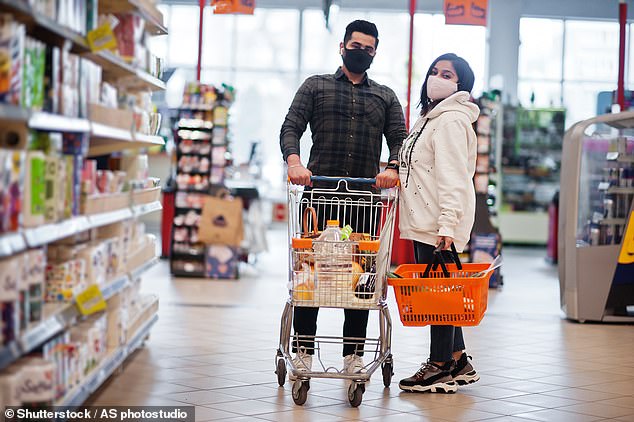 The average shop size has shrunk by 8% versus last year as office workers have been able to return to cafes and restaurants, but it is still 7% higher than pre-pandemic levels

‘To ensure this, it has set up a new Cabinet committee on logistics to deal with supply chain issues.

‘And recognising the new customs controls come in on January 1, HMRC is supporting traders and hauliers to adjust to the new obligations following the end of the transition period.’

Ms Frazer also stated the Government was tackling HGV issues to increase efficiency in the supply chain, when questioned by Labour MP Chris Elmore – who said a wine importer in his constituency has gone from taking seven to nine days to import wine from the EU to 12 weeks.

In a speech in Leeds, the Bank of England’s deputy governor Ben Broadbent said that the recent rise in inflation for goods was partly caused by supply chain pressure, but he added this is likely to fade and potentially reverse before a rate rise would have an impact.

Mr Broadbent said: ‘I still think it’s more likely than not – looking a couple of years ahead, as we should – that these pressures on traded goods prices are more likely to subside than intensify.’ 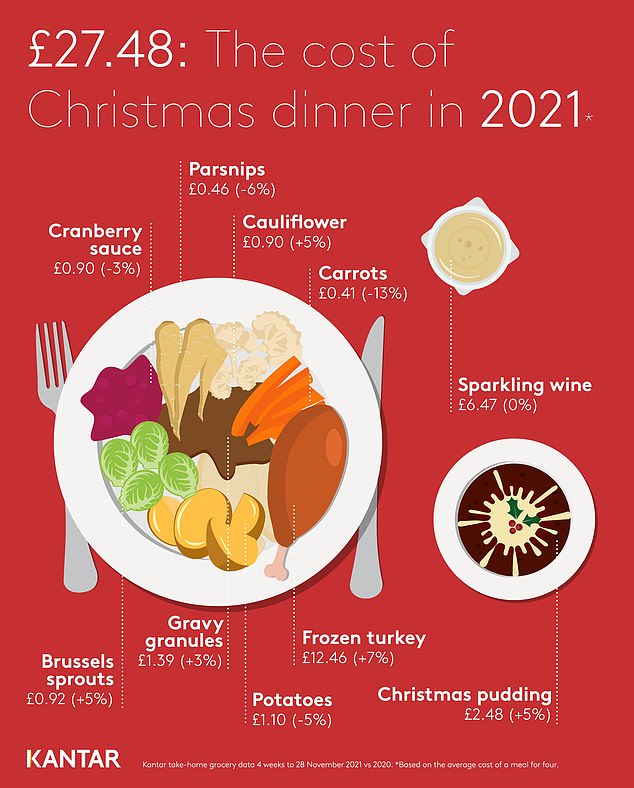 Kantar calculated the cost of a Christmas dinner in 2021, compared to this time last year

Kantar said that overall supermarket sales dropped 3.8% to £29.6 billion over the 12 weeks leading to November 28 compared with a year earlier, when the second coronavirus lockdown restrictions boosted grocery trade.

The average shop size has also shrunk by 8% versus last year as people have been able to return to offices and with restaurants and cafes open, the data revealed.

Despite this, the data also suggests Britons are not yet reining in their spending for the festive season – with sales of supermarket premium own-label ranges, such as Tesco Finest and Asda Extra Special, the fastest growing ranges in stores.

Grocery spending is also stronger than pre-pandemic levels, up 7% over the quarter compared with the same period in 2019.

Fraser McKevitt, head of retail and consumer insight at Kantar, said: ‘As we count down on our advent calendars to the big day, it’s clear that shoppers want to have some fun and make this Christmas extra special.

‘Price inflation doesn’t seem to be denting their desire to treat themselves and loved ones. Our excitement about Christmas this year has been slightly tempered as news of the Omicron Covid-19 variant has emerged.’

All of the big chains saw grocery sales fall year-on-year in the latest data.

But Tesco is enjoying its biggest market share since February 2019 despite seeing sales fall 1.4%. Its market share rose to 27.7% in the most recent quarter, against 27% a year ago.

Morrisons suffered the biggest sales fall of the Big Four chains, down 7.1%, with a drop in market share to 10% from 10.3% a year ago.