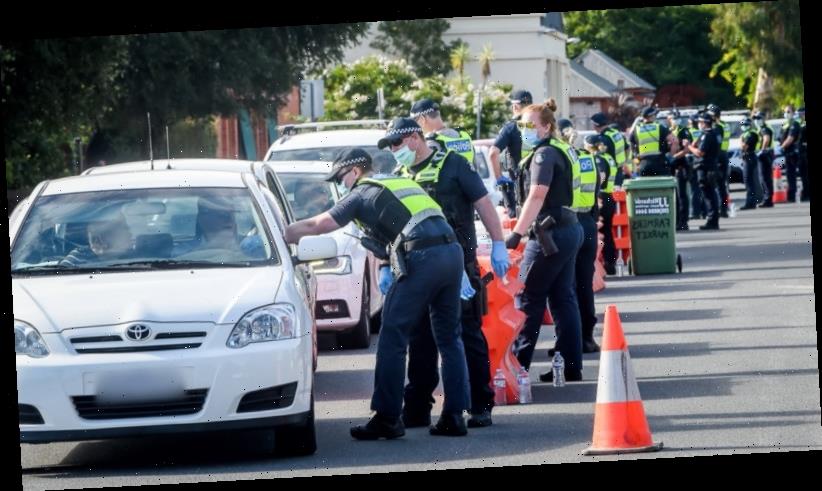 'You are in a COVID-19 red zone. No entry to Victoria without exemption'

This morning, Australia is a country divided. A full-page ad in today's Sydney Morning Herald newspaper, taken out by the Victorian government, reads: "You are in a COVID-19 red zone. No entry to Victoria without exemption." 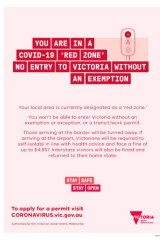 Under a new “traffic light” system introduced by Victoria from 6pm on Monday, people in regional NSW and the Central Coast (an "orange zone") can now apply for a permit to travel south of the border provided they have a coronavirus test within 72 hours of arrival.

But anyone who has been in Greater Sydney – a "red zone" defined as Sydney, Wollongong and the Blue Mountains – are not allowed to enter Victoria without an exemption. If they do enter the state unauthorised they will be fined $4957 and either returned on the next flight or, if they are a resident, required to self-isolate at home for 14 days.

There is no explanation for what the criteria is for a region to be classified green, orange or red.

Victorian Premier Daniel Andrews did not give a timeline or explanation for when Sydneysiders might qualify for permits but said the situation would be reviewed daily. "The stakes are very high here: we have built something that is precious and it needs to be safeguarded," he said.

Mr McGowan, who has a hard border in place for all of NSW, accused Ms Berejiklian of “ticking along with the virus” and “doing something different” to the rest of the country.

Ms Berejiklian said her state's approach to the pandemic was "completely consistent" with national cabinet. "The target is zero community transmission," she said.

"As long as there are flights returning citizens to Australia, elimination of COVID-19 is impossible.

NSW Deputy Premier John Barilaro has said the death of his aunt and uncle from COVID-19 in Italy last month had changed his perspective on the pandemic.

Mr Barilaro yesterday revealed his aunt Maria Inzillo and her husband Damiani Nesci, who lived in the Italian city of Genoa, died with the virus in December.

Speaking on Sydney radio station 2GB this morning, Mr Barilaro said his uncle had passed away just before Christmas and his aunt just before the new year. 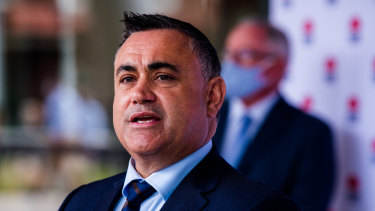 "She wasn’t aware he had passed because she was put into an induced coma," he said.

"They got unwell, went straight into hospital, were locked away in real terms … we didn’t get to say goodbye."

Mr Barilaro said he had been reminded of Australians' compliance and that "our health system is world-class".

"Once you see what has occurred, and the Italian health system isn’t great, never has been … the reality is it’s a stark reminder," Mr Barilaro said.

"We talk about this virus, and I think a lot of people talk about it … do we really know someone who's had the virus or passed away? It changes your whole perspective on what this is."

He said it was his instinct to "push the health advice" while NSW Premier Gladys Berejiklian tended to be more cautious, but that he believed the state had gotten the right balance in its approach to managing the pandemic.

Another day, another set of rules to remember. Under a new traffic light system that aims to halt the spread of COVID-19 between states, any Australian wishing to enter Victoria – including returning residents – will have to apply for a permit online.

The arrangement, which came into force last night, sees Australia divided up into green, orange and red zones.

Those in green and orange areas (regional NSW and the Central Coast) can enter Victoria, which means some travellers in NSW can come home if they get a permit, get tested and isolate until they receive a negative result.

But anyone in a red zone (Greater Sydney and Brisbane) cannot, leaving many Victorians stuck in the cities with no pathway to return. Existing permits are still valid but the fine for arriving without one is $5000; communities along the NSW border zone are exempt.

Front pages of The Age and The Sydney Morning Herald

Here's what is making front-page headlines on this Monday:

New "traffic light" travel rules will leave many Victorians stuck in Sydney and Brisbane. Sydneysiders are no closer to knowing when they can travel interstate as border bickering between premiers worsens amid a handful of new coronavirus cases in the city's west and fresh venue alerts for the northern beaches.

Meanwhile, some women say they are delaying having a baby until more is known about any potential side effects of getting a COVID-19 vaccine while pregnant.

This time yesterday, the global tally of cases has passed 90 million. Today, the figure stands at 90,673,898, according to Johns Hopkins University.

The number of infections worldwide has doubled in just 10 weeks – COVID-19 infections had hit 45 million as recently as late October.

You can explore our data centre below:

Hello and welcome to Monday's live coverage of the coronavirus pandemic. It's Marissa Calligeros here coming to you from Brisbane, where the city has emerged from its three-day lockdown.

Yesterday was another day in which the rhetoric over coronavirus restrictions was significantly more dramatic than the number of cases – here's a quick recap of where we are: