A photo showing the Chinese ambassador to the Pacific island nation of Kiribati walking on the backs of people as part of a welcome ceremony has sparked controversy.

A top US diplomat derided the act as unacceptable behaviour after a social media image showed a man being received by a human equivalent to the red carpet.

Beijing today denounced the criticism as slander. The Chinese Ministry of Foreign Affairs said its ambassador Tang Songgen was taking part in a traditional welcome ceremony. 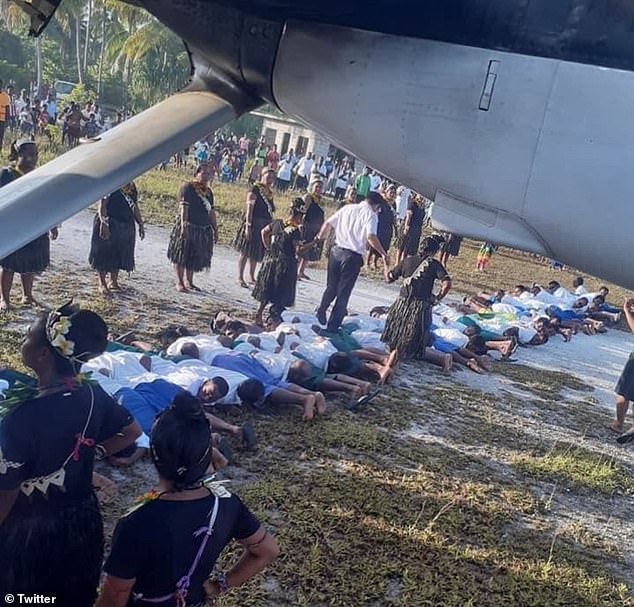 The grainy photograph that appeared on social media showed a man in a white shirt and grey trousers stepping on the backs of about 30 people lined up on the ground. The man in question is reported to be Tang Songgen, the Chinese ambassador to the Pacific island nation of Kiribati

Zhao Lijian, China’s foreign spokesperson, said that Mr Tang participated in the ritual ‘at the cordial request of the local government and people, and out of respect for the culture and traditions of Kiribati’.

Some people have tried to slander China over this incident, but their attempts to damage China’s relationship with island nations will not succeed, Mr Zhao told a daily briefing in Beijing.

The grainy photograph that appeared on social media showed a man in a white shirt and grey trousers stepping on the backs of about 30 people lined up on the ground.

Michael Field, a journalist who uploaded the photo onto Facebook on Sunday, claimed the person was stepping over children. 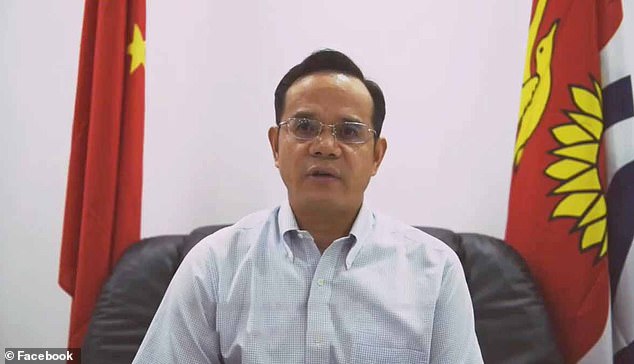 Mr Tang said he had made a trip to Kiribati’s outer islands this month, after taking up his post when China resumed diplomatic relations late last year.

In a post on Facebook, he called the trips ‘educational visits for the Embassy team to learn Kiribati culture and tradition’.

‘The Embassy team was warmly welcomed and received in those islands by the old men, the island councils as well as the local people,’ he wrote.

Kiribati has a small landmass yet controls large swathes of ocean through its string of coral islands. It is also home to a Chinese space-tracking station mothballed since 2003, though its current status is unclear.

Mr Tang was appointed in March this year – six months after Kiribati cut its diplomatic ties with Taiwan and formed foreign relations with China.

The photograph stirred controversy in the Pacific where China has been trying to expand its influence to the consternation of the United States and its old ally, Australia.

Kiribati’s foreign ministry did not immediately respond to a request for comment. 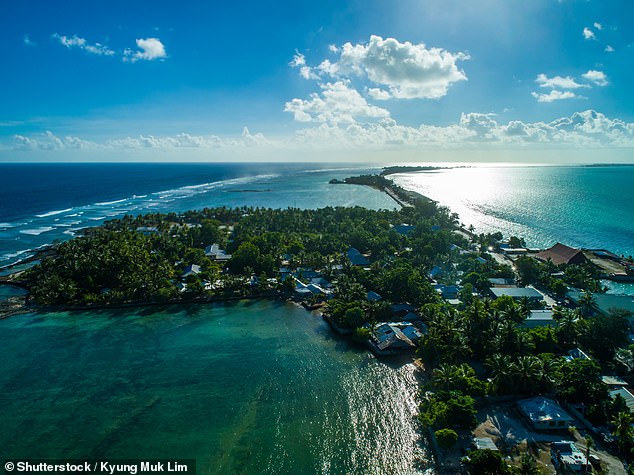 The US defence attaché in neighbouring Fiji took the opportunity to questioned Mr Tang’s behaviour.

‘I simply cannot imagine any scenario in which walking on the backs of children is acceptable behaviour by an ambassador of any country (or any adult for that matter!),’ the diplomat, Commander Constantine Panayiotou, said on Twitter.

‘Yet here we are thanks to China’s ambassador to Kiribati.’

Another Twitter user Drew Pavlou, who describes himself as a ‘human rights and democracy activist’, called China ‘an imperialist state intent on colonizing the world’ while commenting on the image on the platform.

In Taiwan, which lost Kiribati as a diplomatic ally to China last September, the foreign ministry said they were as shocked as everyone else at the picture.

‘This is not the Kiribati we know, and we didn’t know Kiribati had this kind of welcoming ceremony. Taiwan would not treat our allies and their people like this,’ said spokeswoman Joanne Ou.

China’s nationalistic Global Times said the ‘misrepresentation’ of the picture was aimed at damaging China’s image.

‘Portraying the welcome ceremony as being symbolic of “subjugation” reflects some Western politicians’ grievances and concerns over the growing friendship between China and Kiribati, especially after Kiribati resumed diplomatic relations with China on September 28, 2019,’ the newspaper said in a commentary, citing observers.

‘Everyone should be less hysterical about this & more respectful towards the diversity of Pacific ways, islanders should have cultural self-determination,’ Teaiwa said on Twitter.