A CHEF has hit back at a moaning Tripadvisor reviewer who said a restaurant was a “total rip off” and to avoid it “like the plague”.

Gary Usher posted a savage response to the angry one-star review – asking the customer to “be kind” to his “humble neighbourhood bistro”. 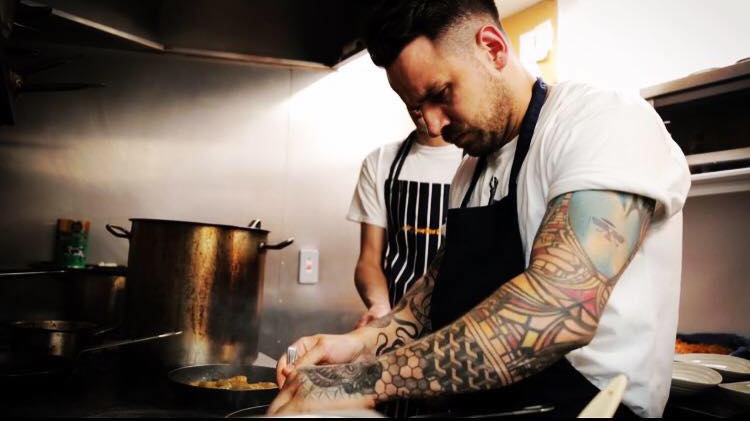 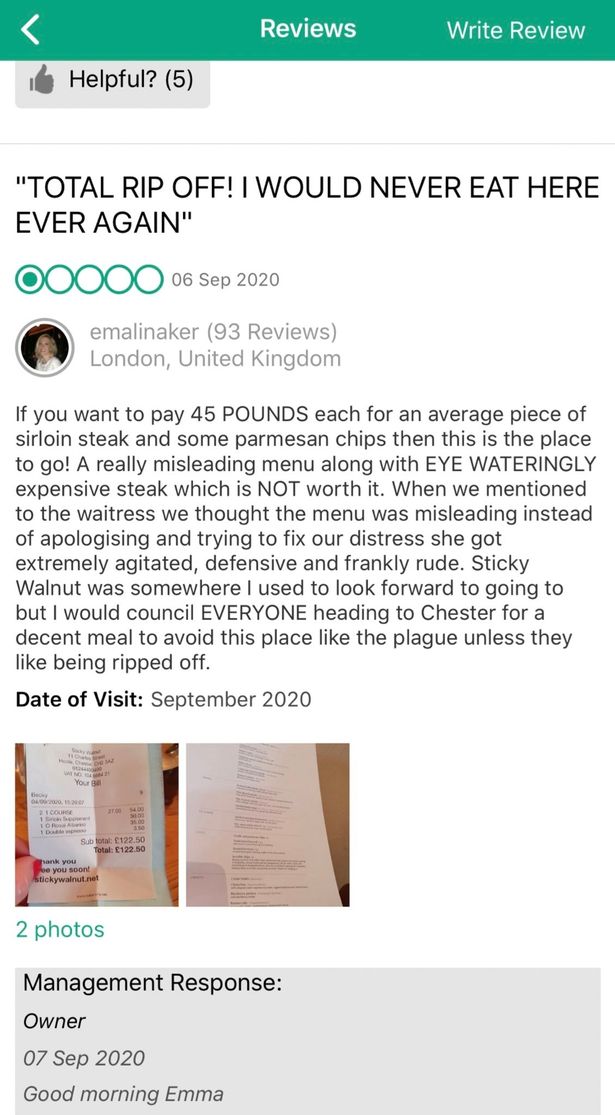 Tripadvisor user ‘emalinaker’ had said that the Sticky Walnut in Chester had an “eye-wateringly expensive steak” which was “not worth it”.

She wrote: "If you want to pay £45 each for an average piece of sirloin steak and some parmesan chips then this is the place to go!

“When we mentioned to the waitress we thought the menu was misleading, instead of apologising and trying to fix our distress, she got extremely agitated, defensive and frankly rude.

“Sticky Walnut was somewhere I used to look forward to going to but I would council (sic) EVERYONE heading to Chester for a decent meal to avoid this place like the plague unless they like being ripped off.”

Chef and owner Gary responded: “Good morning Emma. I only personally respond on here every few years so well done on getting me out of Twit-advisor hibernation.

“The essence of your ‘review’ should be quite simple. You think we’re a rip off, which is probably the most common complaint on the Twit-advisor website.

“So nothing new there. So why am I responding?

“Simply because you wouldn’t let Becky the MANAGER explain at the time.

“In fact it was YOU who got extremely agitated, defensive and quite frankly rude.

“With all set menus there are supplements. On ours it’s our dry aged Aubrey Allen sirloin. In Sticky Walnut it will cost an extra £15 per person to have the sirloin instead of, for example, the feather blade of beef.

“Your last Twit-advisor review was for The Dorchester ‘to celebrate mummy’s birthday’.

“Their menu is £53 for three courses, also with a supplement for the sharing beef of £22 per person. Ironically, we use the same butcher.

“Why Emma did you not complain about your bill there nor take a photo of your receipt?”

The chef guesses the reviewer “spent over £500” at The Dorchester, which she gave a “glowing five star review”. 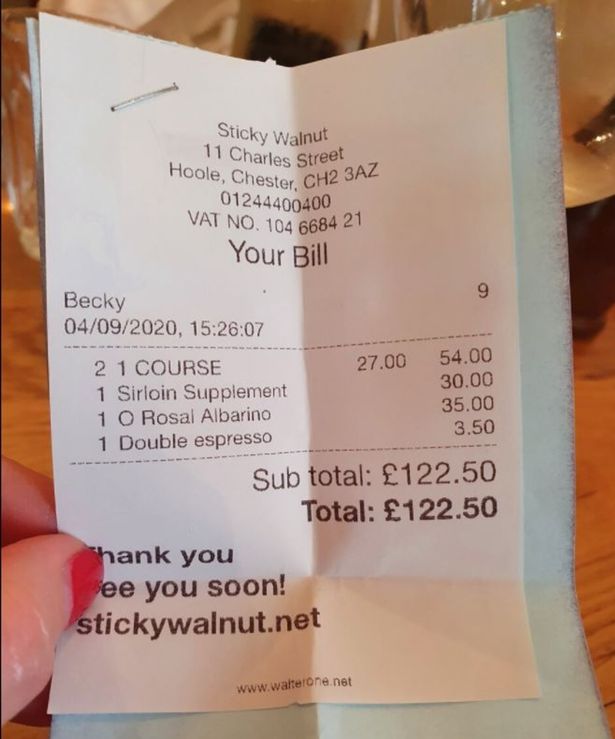 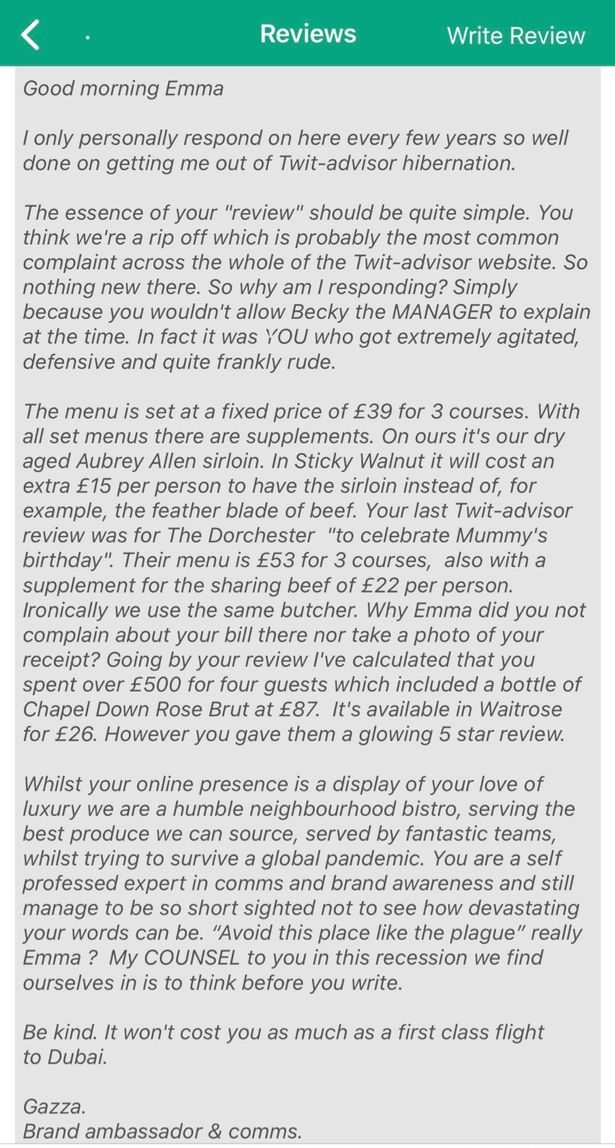 He urged the woman to “be kind” to the “humble neighbourhood bistro”.

Gary added: “‘Avoid this place like the plague’ really Emma?

“My CONSEL to you in this recession we find ourselves in is to think before you write.”

“Be kind. It won’t cost you as much as a first class flight to Dubai.”

He shared his cutting reply on Twitter and received over 40,000 likes – with users praising his honesty.

One user said: “Gary, this is an absolute masterpiece of a response.

“In such a difficult, uncertain time for the hospitality industry customers who leave a one star review (for anywhere) need to take a long hard look at themselves.”

Another wrote: “Over the moon you “counselled” her. The damage these reviews do to small business is unfair.

“Off of the back of your retort I’ll 100% come for the set price menu and I’ll take the supplement for the steak. Sounds like good value to me.” 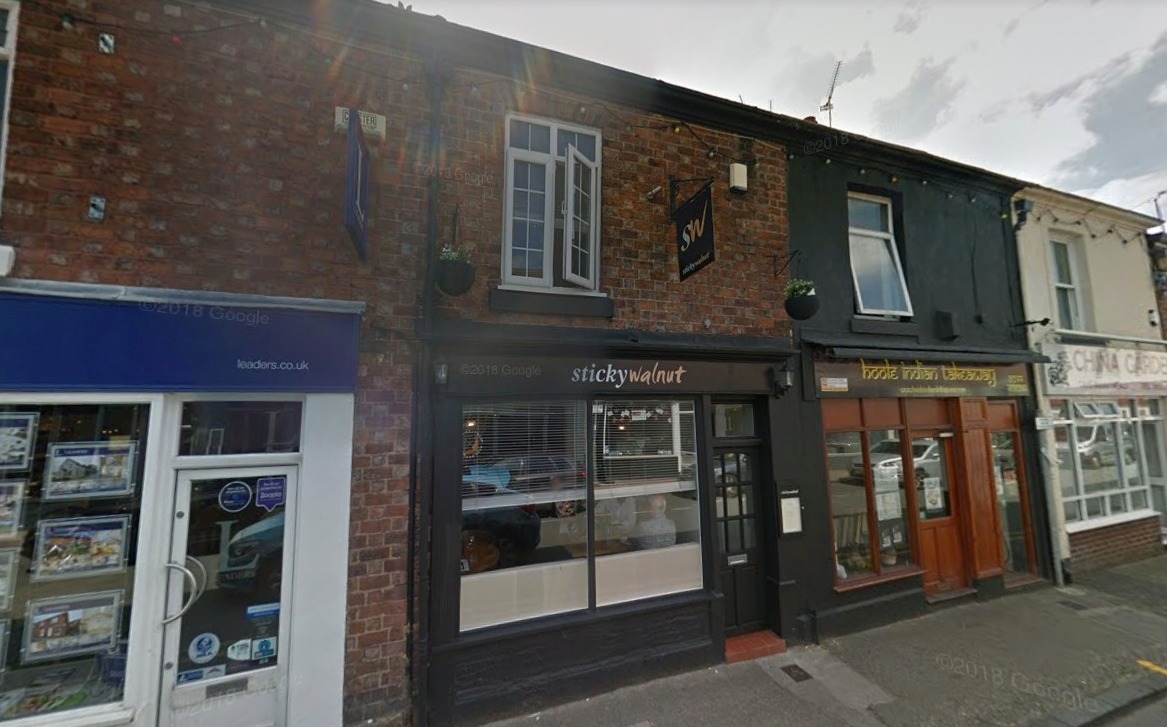