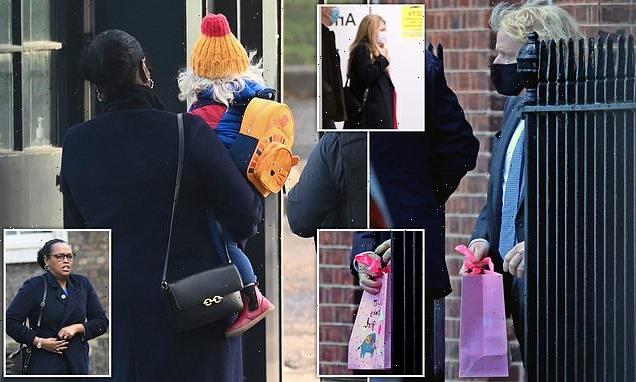 Hello Baby Girl! Boris holds pink present as he heads to hospital to see newborn daughter and wife Carrie – as her best pal Nimco Ali carries their son Wilfred for first meeting with his little sister

Boris and Carrie Johnson’s son Wilfred is thought to be meeting his newborn sister in hospital today after the 20-month-old boy was carried out of Downing Street by the best friend of the Prime Minister’s wife.

The Prime Minister, who was present at a London hospital yesterday throughout the birth of what is believed to be at least his seventh child, was himself also seen leaving No10 today holding a pink gift bag emblazoned with the words: ‘Hello Baby Girl’.

Mrs Johnson’s friend Nimco Ali, who is a Home Office adviser on tackling violence against women and girls, was photographed carrying Wilf out of the gates of Number 10 alongside a police officer and another young woman.

Wilf was seen with a huge mop of white-blond hair just like his father, under a cute orange and red bobble hat, an orange animal backpack and a blue and red coat. He was also wearing blue jeans and tiny red boots.

It comes after Mrs Johnson gave birth to her second child with her husband after a tumultuous 24 hours for the PM, with the couple announcing the birth of a ‘healthy baby girl’ at a London hospital yesterday morning.

His visit to see his third wife today comes at the end of an extraordinary week for the Prime Minister in which he:

Women’s rights campaigner Miss Ali, 38, is a close friend of Mrs Johnson who formed a ‘childcare bubble’ with the couple last Christmas and stayed with them while looking after Wilf, with No10 insisting the rules were followed.

Miss Ali is also an author, podcast host and chief executive of The Five Foundation, a London-based organisation which campaigns towards the elimination of female genital mutilation. She received an OBE for her activism in 2019, and her book ‘What We’re Told Not To Talk About But We’re Going To Anyway’ was published the same year. 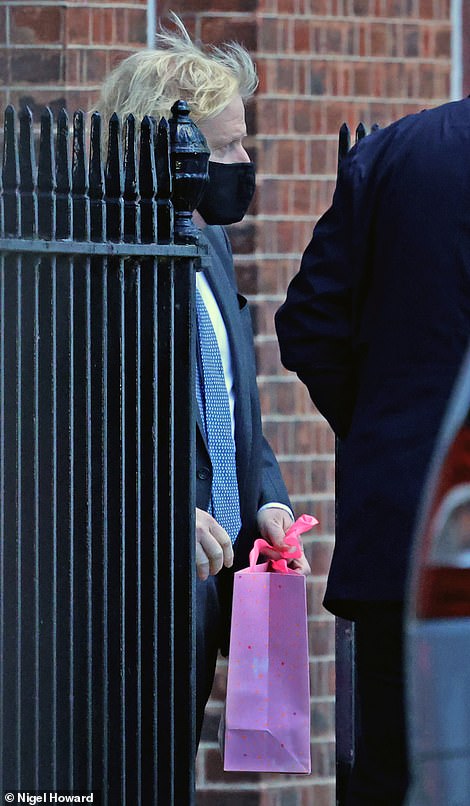 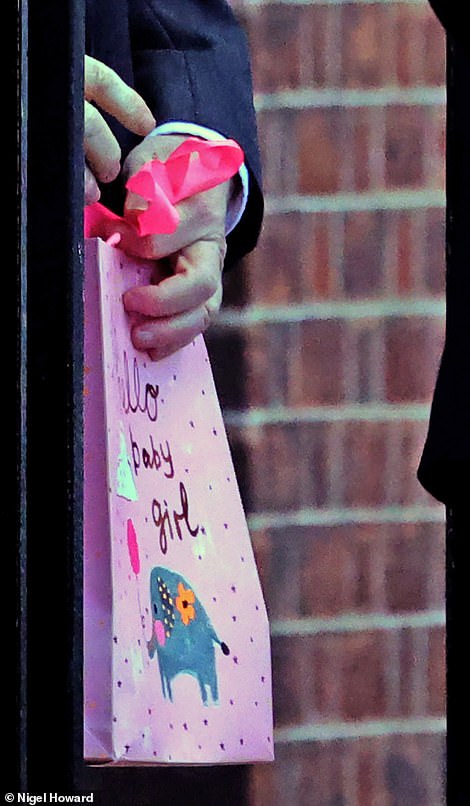 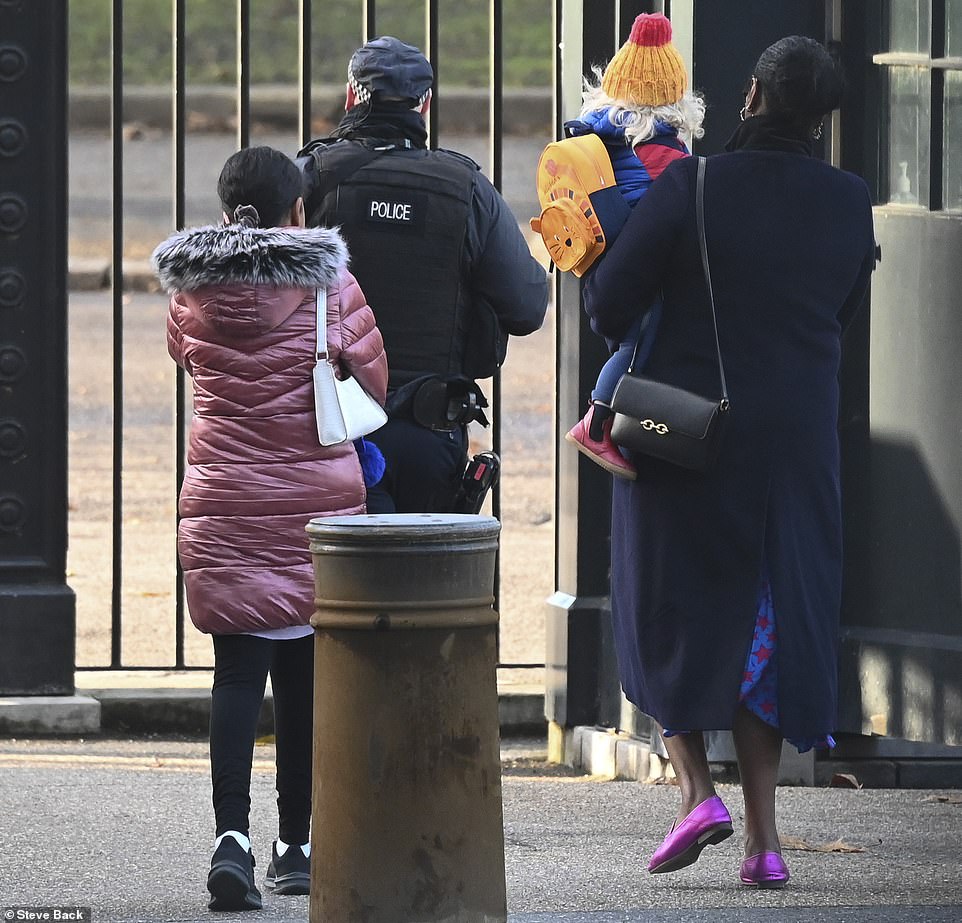 Nimco Ali, a Home Office adviser, is pictured walking out of No10 in London today carrying 20-month-old Wilfred Johnson 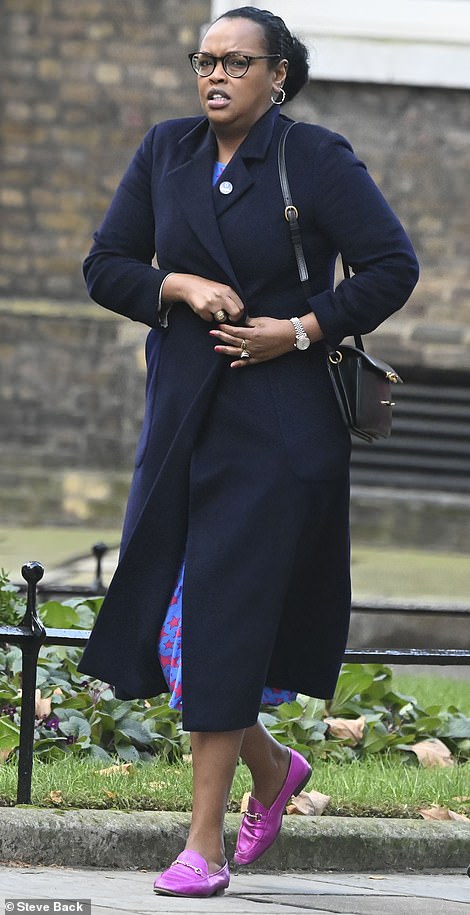 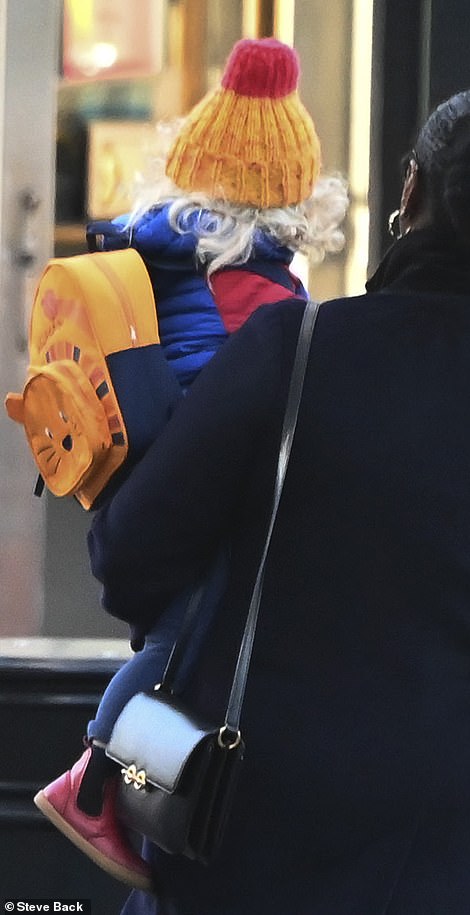 A spokesman for Mr and Mrs Johnson said yesterday: ‘Both mother and daughter are doing very well. The couple would like to thank the brilliant NHS maternity team for all their care and support.’

The couple announced they were expecting their second child together at the end of July, as the 33-year-old environmental campaigner spoke of having a miscarriage earlier in the year.

Seven or eight…. How many children does Boris Johnson REALLY have?

The Prime Minister and Marina Wheeler, who separated in 2018, have four children together: Lara Lettice, 26, Milo Arthur, 24, Cassia Peaches, 22, and Theodore Apollo, 20.

Ms Macintyre’s daughter is allegedly one of two children he may have fathered as a result of an affair.

The Appeal Court ruled in 2013 that the public had a right to know that he had fathered a daughter during an adulterous liaison while Mayor of London in 2009 – but also mentioned the possibility of a second baby.

Lara attended Bedales school – which costs £33,000-a-year – in Hampshire and went on to read Latin at St Andrews University.

She reportedly branded her father a ‘selfish b******’ after his split with her mother.

Milo went to £27,000-a-year Westminster School and can speak Arabic, Russian and French, The Mirror reports. Cassia went to Highgate School – which costs £18,000 per year – and Theodore went to Cambridge University.

Boris’ son Wilf, born on April 29, 2020,  is from his relationship with new wife Carrie, who lives with him in Downing Street.

His second baby with Carrie was born yesterday, his seventh child officially.

The birth of a sister for Wilf came the morning after the Prime Minister announced England is entering Plan B to combat the spread of the Omicron variant of coronavirus.

As well as facing Tory anger over the latest restrictions, Mr Johnson was battling the fallout of an allegedly rule-breaking No10 Christmas party last year which forced the resignation of senior Government aide Allegra Stratton.

The Prime Minister’s former chief adviser Dominic Cummings asked on social media earlier this week whether the Cabinet Secretary’s investigation into the Downing Street pre-Christmas bash would also look into the ‘flat party on Fri 13 Nov’ as well as ‘the other flat parties, and the flat’s ‘bubble’ policy’.

The mention of the ‘bubble’ is thought to refer to the decision to allow Miss Ali at No10 over the festive period ‘to help support and look after’ baby Wilf.

Asked during Prime Minister’s Questions on Wednesday if a party took place on that date, Boris Johnson said: ‘No, but I’m sure that whatever happened the guidance was followed and the rules were followed at all times.’

Also yesterday morning, the Conservatives were fined £17,800 over a controversial donation which helped cover the lavish refurbishments to the couple’s Downing Street flat.

The pair were photographed walking into the hospital, reportedly at 7.40am. Mr Johnson will spend some time with his family, although it appears he is unlikely to take an extended period of paternity leave.

Labour leader Sir Keir Starmer sent his congratulations to the couple on the arrival of their baby, and added: ‘Wishing your family health and happiness.’

The new arrival means Mr Johnson has at least seven children, although he has frequently obfuscated when asked exactly how many.

Wilfred Lawrie Nicholas Johnson was born in April last year and was named in partly in tribute to two doctors, Nick Hart and Nick Price, who helped saved the Prime Minister’s life when he was admitted to hospital with Covid-19 earlier that month.

The couple married during a secretly-planned wedding at Westminster Cathedral in May.

It emerged during a court hearing in 2013 that he had fathered a daughter during an affair when he was London mayor in 2009. 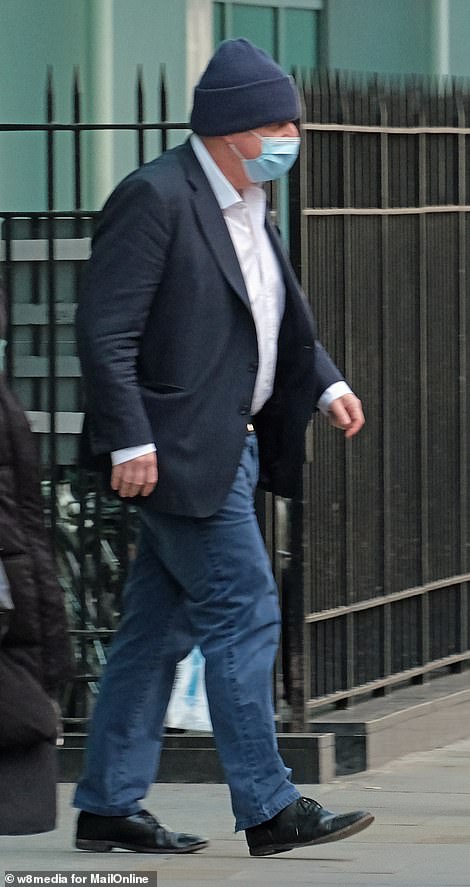 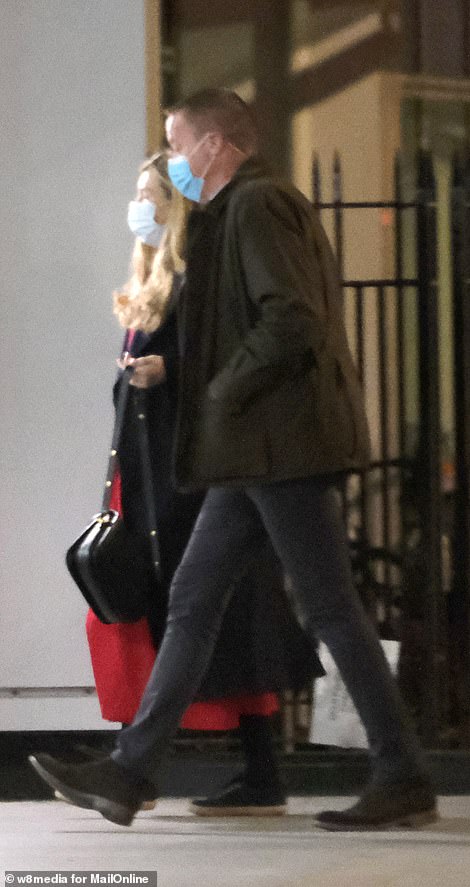 Boris Johnson (left) leaves a London NHS hospital at 11.45am yesterday after his wife Carrie gave birth to a baby girl – their second – and his seventh child. At 7.40am yesterday (right), Carrie Johnson was pictured arriving before she gave birth 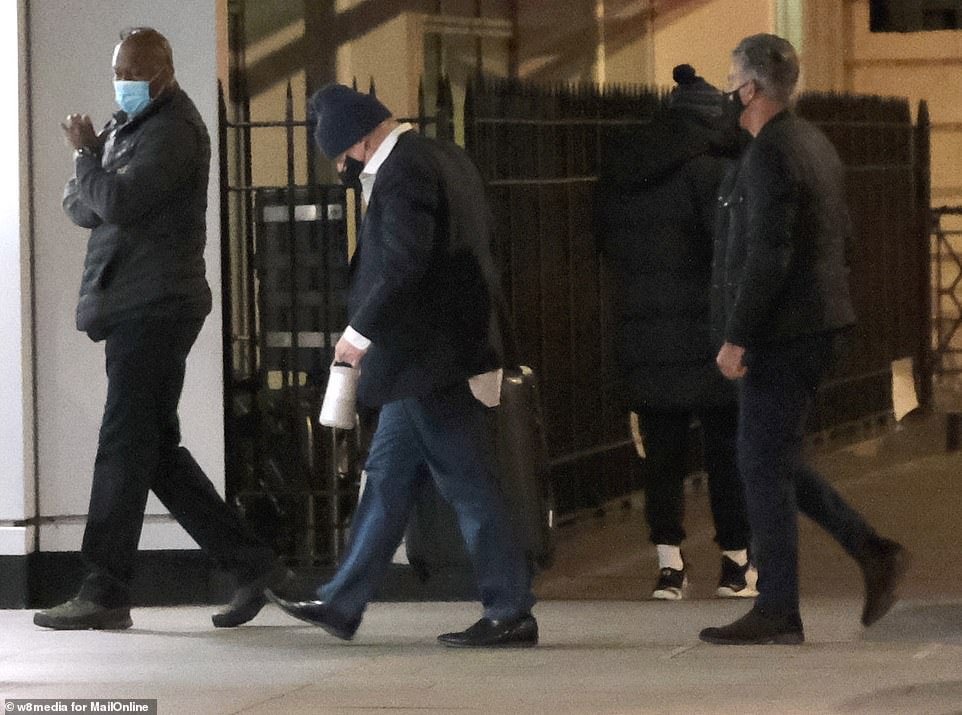 The PM, wearing a mask and a trademark wooly hat, was flanked by two police officers as he followed Carrie in yesterday 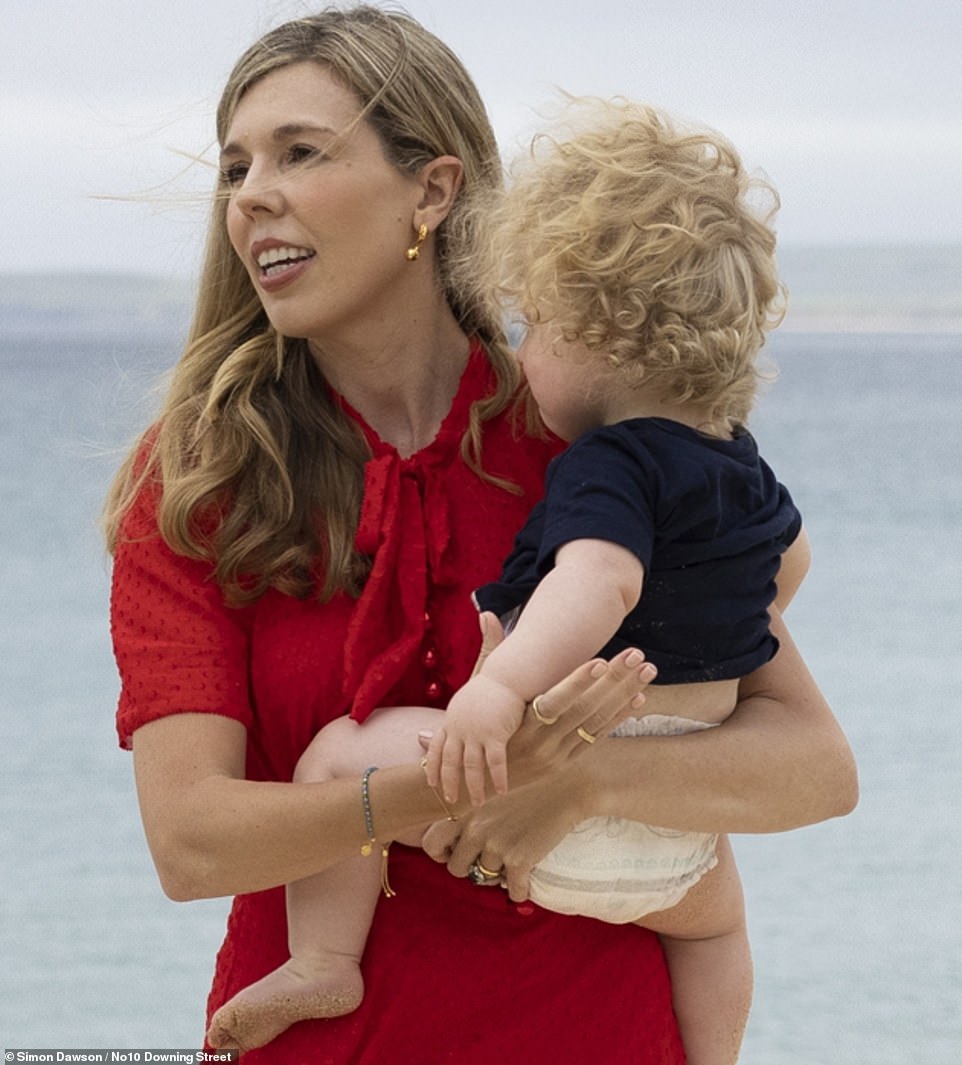 The PM had Wilfred with his third wife Carrie Johnson, pictured  at the G7 summit in Cornwall in June 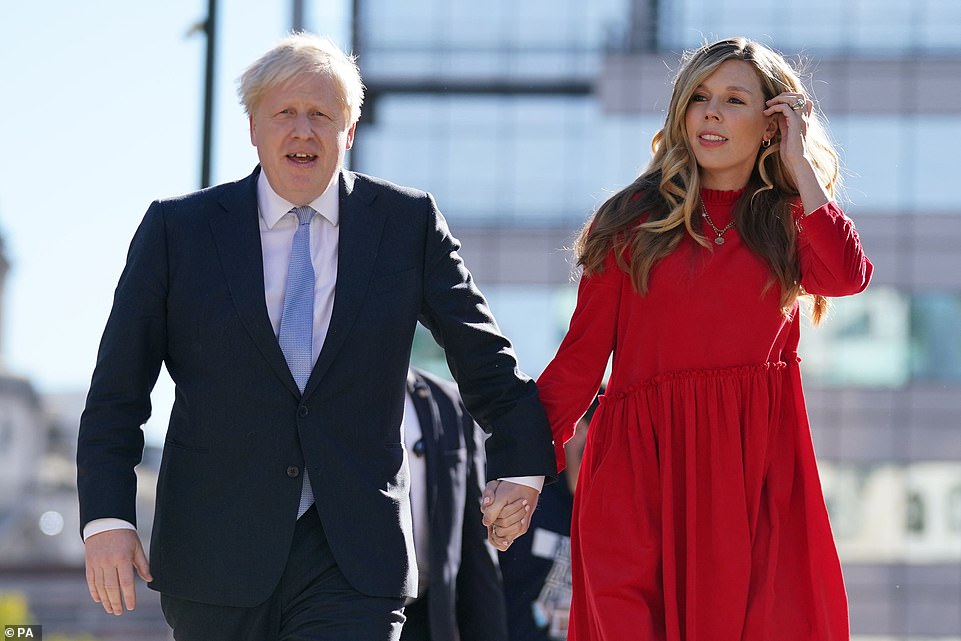 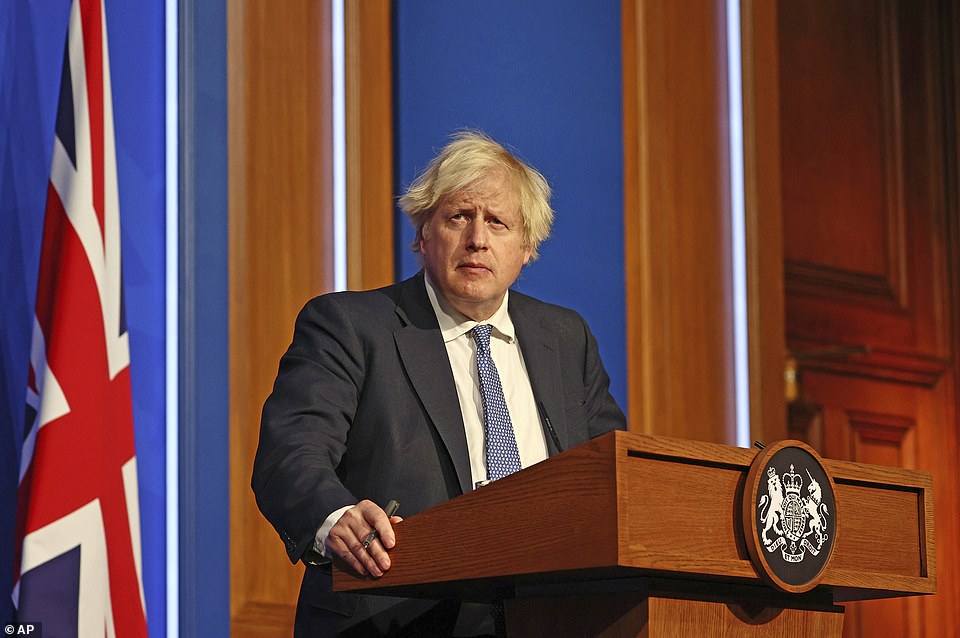 At a Downing Street press conference on Wednesday night, the PM declared that people should once again work from home

In October Boris and Carrie Johnson insisted they did not break Covid rules at Christmas because Miss Ali who stayed with them was looking after their son. 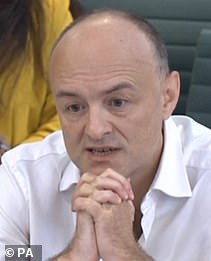 Dominic Cummings today declared Boris Johnson ‘got a wrong’un pregnant’ in Carrie Johnson who he claims ‘wants to control the country’ via her husband.

His extraordinary attack on the Prime Minister’s wife came as she remained in hospital just 24 hours after giving birth to a baby girl – believed to be Mr Johnson’s seventh child.

In a Q&A on his blog, where he urged subscribers to ‘ask me anything’, he said of Boris: ‘He’s a shambles but the shambles has been made worse by hooking up with a wrong un [Carrie Johnson] who wants to control the country via him. He got a wrong un pregnant, listened to her insane advice/screaming, and went into a flat spin’.

He said Mr Johnson ‘hasn’t heard the last’ of the Christmas party scandal, claiming there will be pictures proving it took place, and said that he knew teenagers who would be better at the job than the Prime Minister.

The couple initially insisted they had broken no rules and officials soon followed that up by saying this was because they had formed a ‘childcare bubble’ with Miss Ali.

However this explanation later drew fresh scrutiny because such an arrangement was allowed only in very specific circumstances.

Published on the government website, special guidance further warned that a childcare bubble was not appropriate ‘if you want to meet socially’.

‘You can continue to use a childcare bubble on December 25 but only if reasonably necessary for the purposes of childcare and where there are no reasonable alternatives,’ it added.

London was under Tier 4 restrictions last Christmas, banning mixing indoors with other households, except in support and childcare bubbles.

But a Downing Street spokesman insisted that the Prime Minister and Mrs Johnson followed the coronavirus rules at all times.

He added: ‘The rules made clear you could continue to use a childcare bubble at Christmas itself, including in a Tier 4 area.’

Miss Ali tweeted at the time that she had faced ‘two days of racist and disgusting tweets’ because of ‘untrue’ stories about what happened.

‘No, I did not break any rules but you all knew that and just wanted a reason to tweet hate,’ said the political campaigner.

In January this year it was reported that Mr and Mrs Johnson had formed a ‘support bubble’ with her mother Josephine McAfee so she could help look after Wilfr.

Under the Covid rules, people could have both a childcare bubble and a support bubble simultaneously. No10 said Mrs Johnson’s mother had not joined them in Downing Street at Christmas.

The couple moved into No10 when Mr Johnson became Tory leader and Prime Minister in July 2019. The Johnsons announced their engagement in February last year and Wilfr was born a few months later in April.

The childcare bubble rules were open to anyone living in a household with a child aged under 14, allowing friends or family from one other household to provide help.