MONTEREY PARK, Calif. (Reuters) – Just two days after a gunman killed 11 people at a Los Angeles-area dance studio, seven more victims were shot dead in an agricultural area near San Francisco, as California suffered one of its bloodiest spates of mass gun violence in decades.

Authorities said they had not identified the motive for either of the rampages, which seemed especially baffling in part because the suspects in each were men of retirement age, much older than is typical for perpetrators of deadly mass shootings that have become numbingly routine in the United States.

California Governor Gavin Newsom said he was visiting wounded survivors from Saturday night's massacre in the Los Angeles suburb of Monterey Park when he was informed of Monday's killings in northern California.

At the hospital meeting with victims of a mass shooting when I get pulled away to be briefed about another shooting. This time in Half Moon Bay.

Otherwise, the back-to-back shootings appeared to have little in common.

The latest spasm of gun carnage struck the coastal town of Half Moon Bay, about 30 miles south of San Francisco, where a gunman opened fire on groups of farm workers at two locations about a mile apart, leaving a total of seven dead and one badly wounded, then fled.

The accused gunman, identified as Chunli Zhao, 67, was taken into custody a short time later after he was found sitting in his vehicle, parked outside a sheriff's station, where authorities said they believe he had come to turn himself in.

Corpus said the suspect, who was "fully cooperating" with investigators following his arrest, had worked at one of the two crime scenes. She described the sites as agricultural "nurseries," where some of the workers also lived. Local media reported one site was a mushroom farm. 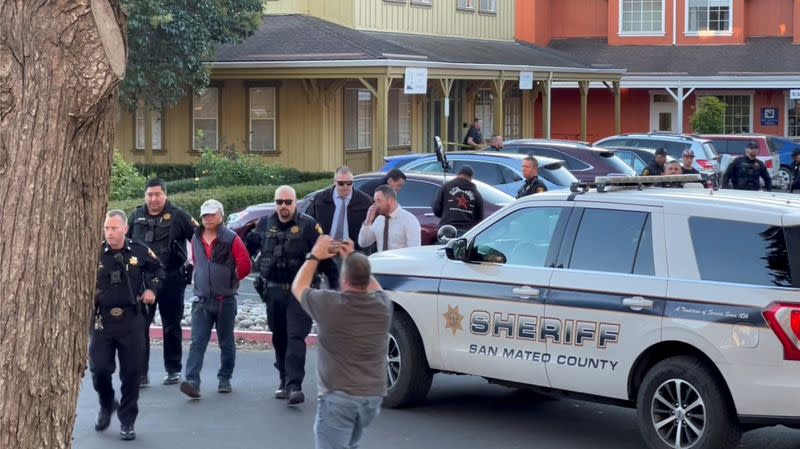 In a separate Bay-area incident on Monday evening that drew far less attention, one person was killed and seven wounded in a "shooting between several individuals" in Oakland, police reported, in circumstances suggesting a case of gang violence. Police gave few details, but said the surviving victims had all gotten themselves to area hospitals.

News of the massacre in Half Moon Bay surfaced as police worked through a second full day of their investigation into the shooting at the Star Ballroom Dance Studio in Monterey Park, just east of downtown Los Angeles, where a gunman shot 11 people to death. Nine others were wounded.

Authorities said the suspect, Huu Can Tran, 72, drove next to an adjacent town and barged into a second dance hall but was confronted by the club's operator, who wrestled the weapon away during a brief scuffle.

Tran, himself a longtime patron of the Star Ballroom, catering mainly to a older dance enthusiasts, fled again and vanished overnight.

He shot himself to death in his parked getaway vehicle, a cargo van, on Sunday morning, about 12 hours after his rampage, as police surrounded him in the town of Torrance, south of Los Angeles, authorities said. 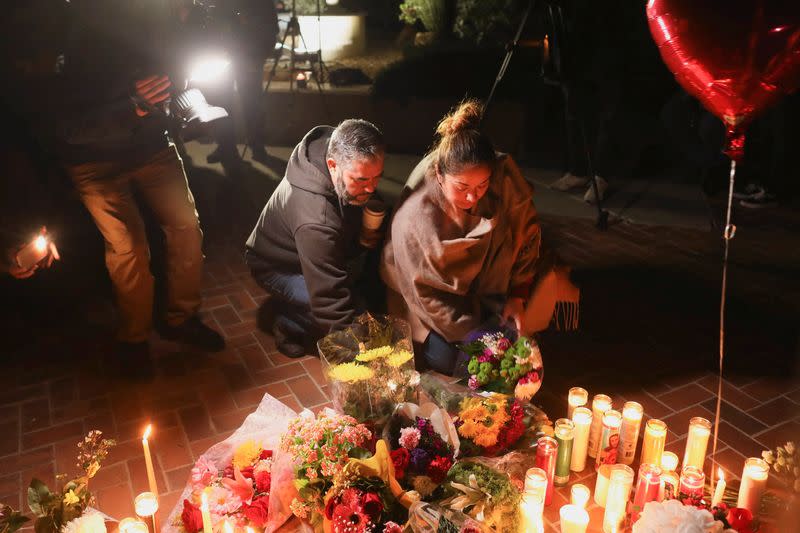 Saturday's violence unfolded in the midst of a Chinese Lunar New Year celebration in Monterey Park, a hub of the Asian-American community in Southern California, giving rise initially to concerns the attack may have been racially motivated. The second day of the event was canceled.

It ranked as the deadliest mass shooting ever in Los Angeles County, according to Hilda Solis, a member of the county Board of Supervisors.

By comparison, the 1984 massacre of 21 people at a McDonald's restaurant in San Diego stands as the greatest loss of life from a single shooting incident on record in California.

Fourteen people were slain in San Bernardino, east of L.A. County, in 2015, by a married couple who authorities described as extremists inspired by foreign terror groups. They were killed hours later in a shootout with police.

The two latest shootings were also notable for the age of the suspects, one in his late 60s, another in his early 70s.

A database of 185 mass shootings between 1966 and 2022 maintained by the nonprofit Violence Project includes just one carried out by someone 70 or older – a retired miner who killed five people in Kentucky in 1981.

He said a search of the suspect's mobile home in a gated senior-living community in the town of Hemet, 80 miles east of Los Angeles, turned up a rifle, electronic devices and items "that lead us to believe the suspect was manufacturing homemade" weapons silencers. Police also seized hundreds of rounds of ammunition from the dwelling and a handgun from the suspect's vehicle.

Monterey Park Police Chief Scott Wiese said investigators were looking into unconfirmed reports that the violence may have been sparked by jealousy or relationship issues.

Adam Hood, who rented a home from Tran in the Los Angeles area, told Reuters his landlord enjoyed ballroom dancing and was a regular at the Star Ballroom, though he complained that others there were talking behind his back.

"He was distrustful of the people at the studio, angry and distrustful. I think he just had enough," Hood said.